After a day long trek in the ascending passages, we finally made it to the surface. We were tired as we had been up all night walking. I was worried that firsty may get the wrong message and leave without us but he was waiting for us. Turned out that Firsty had found from the townsfolk that there was a passage that connected the strange undersea city with the island above. As the sea was normal again, we set out to sail. On to the next mark. One can only wonder what more surprises will the sea of shipwrecks throw at us? 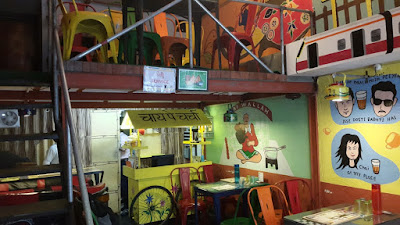 Chai Pe Charcha is a simple concept but quite a popular one. After the roaring success of the brand's Lower Parel outlet, CPC comes to my neighborhood in Prabhadevi. Its located in a connecting lane between two main roads and is thus not very easy to find for a person not living in this area. It is bang opposite the Prabhadevi Mandir. If you are into the Pokemon craze, then it is right opposite a Pokestop. However, don’t let its unpopular location fool you. This little café is as popular as its Lower Parel sibling. Who knows, it may even be more popular. 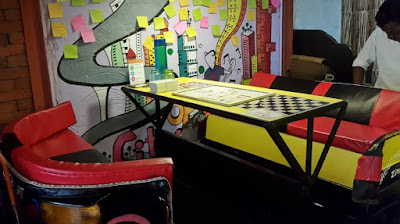 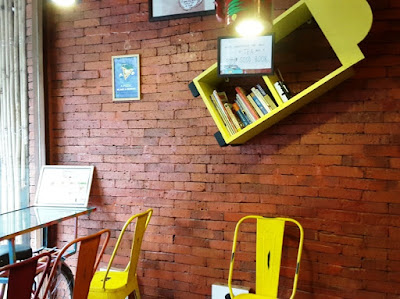 The Café felt like a mix of a small highway restaurant and a modern bistro. There were artifacts that signify Mumbai like the popular Auto Rickshaw shaped table or the Mumbai Metro cut out on the ceiling. The baked bricked appearance on the other side with a book shelf added to the mix of themes.

There is simplicity, there is sophistication and there is ultimately comfort. The tables resemble those found in neighborhood tea stalls. If that wasn’t enough, there was even a yellow colored street food "Thela" or cart. The place makes an ideal hangout for friends. The cafe is more than just talk, it also provides fun board games like Ludo or chess which people can play while talking. The café is crowded at most times of the day.

Since the place is tea themed, I started out with one of their special beverages. 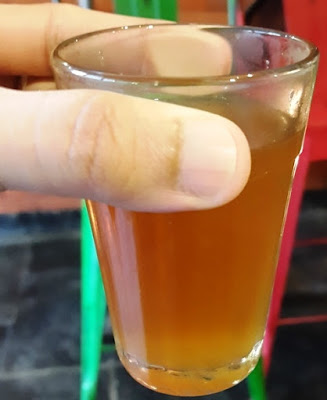 The Hajmola Chai was a milk free and sugarless tea that was tangy and lemony. It was made out of lemon, Rock salt and other ingredients which are often used to make the digestive candy Hajmola. Not only was this tea comforting on the tongue, it was also good for digestion. Of all the health based teas that I know, this was by far the most tasteful.  Of course this isn’t the only tea on their menu, there are many other unique beverages waiting to be tried.

Crewmate : You should get some sleep Cappy. Firsty can take care of things.

Captain : Firsty was up all night too looking for us. He can take care of things later. I will manage the helm now. 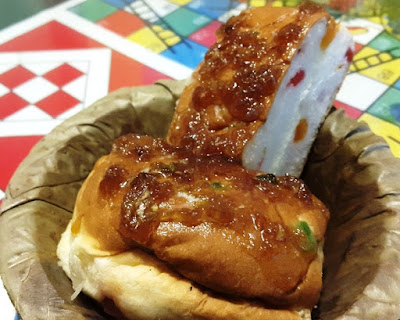 Gulkand Bun Maska for 45 INR was a steal of a treat. It made regular bun maska look like a thing of the past. This soft bun was generously coated with Gulkand (a sweet preserve made of Rose petals) and had butter in the centre. It combined sweet, pleasant and savory. It also went really well with my Hajmola tea. I would greatly recommend this to the reader. 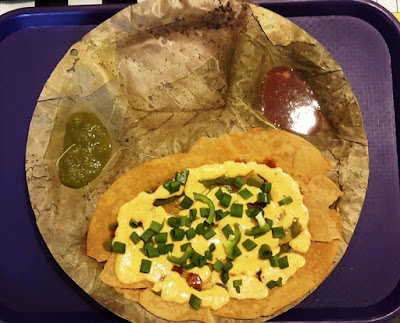 Firangi Khakra was a delectable fusion of Masala Khakra(Savory Mat bean Crackers) and Nacho's Cheese sauce. My only question was, why was this not done before anywhere else? It was such a brilliant fusion. The Khakra pieces went really went with the sauce and it was a salty, savory and cheesy sensation. I ended up licking my fingers clean after this.

This was served on a plate made out of a leaf and there was sweet and spicy chutney as well. I would however recommend the Khrakra to be eaten with the cheese and only use the chutneys if the sauce is exhausted.

Again for just INR 72, this was an amazing treat. 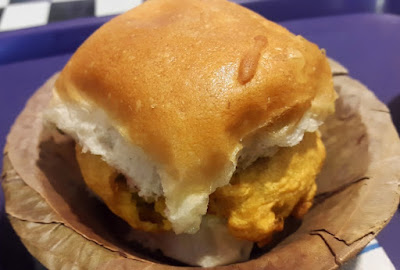 The Good ol' Vada Pav tasted very much like a High School canteen Vada Pav. It was the kind that I have grown up with. No nonsense, no theatrics, no secret ingredient - Just plain good vada pav as its meant to be.

Captain : Barnacles. There could rocks hidden in the mists. This is the sea of ship wrecks after all.

Firsty :(Yawn) Sleep will have to wait mate. We need all hands on deck.

The cafe employs differently abled staff members who have been trained well despite their limitations. The service is decent at this cafe.

As mentioned earlier, one of the best things about CPC is their pocket friendly pricing. One could easily have a satisfying meal for under INR 150. It doesn't get any better than this.

Chai Pe Charcha is an idea that is already rolling on the highway like a juggernaut. It is likely that within a few years time, these cafes will pop up in all densely populated neighborhoods. But for now, I feel privileged to have one of these near my home.

"
Navigator : The winds are too strong, we cannot turn and we cannot drop anchor. We will have to go through this mist.

Captain : Aye, fold in the sails and lower the speed as much as possible. If the winds are strong, the mists should not stay here too long. We need to stall some time.

First mate : The visibility is going down by the second. This mist is dense.

Captain : All hands alert. We don't know whats out there.  Ready on the arms.

Posted by Rishabh Mittal at 4:57 pm No comments:

We stared at a secret chamber inside the secret passage that was supposed to lead us back to the surface. I switched me flashlight on and saw a large pool of water inside the chamber with a shrine like structure in the middle. Nina mewed innocently and looked at me as if beckoning me to go and explore. Cats do have a sixth sense about such things but what could possibly the secret structure be hiding? This place isn't even on the map for the blue compass. Nina better not be sending me after exotic cave fish.

What's the worst peeve one has when one goes into a restaurant to grab some comfort grub? Its the weird music pervading your ears. And worst still is the inability to change that for the better. Some restaurants have Jukeboxes but its kind of a buzzkill to leave your meal midway to go adjust the Jukebox. And that is where Playlist pizzeria comes up with its unique seller. Sit on your table, download a jukebox app and add your choice of music to a queue which will play when its turn comes. Sounds cool doesn't it? 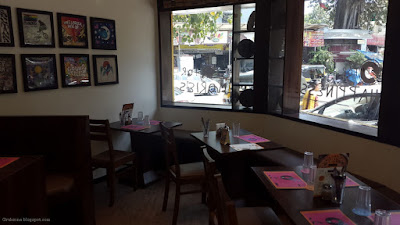 Playlist pizzeria is a small cafe like restaurant located at a corner in the quiet inner lanes of Bandra reclamation. Its quite close to places like Desi Deli or Salt Water Cafe if one needs landmarks. The ambiance feels very typical of a modern bistro cum pizzeria. Being in a residential neighborhood, I am pretty sure the bulk of their business comes from home deliveries but I can see the place getting crowded in the evening as a community hangout spot. Its the kind of place that makes an ideal lured Pokestop (Pokemon Go folks will get this). The ambient temperature feels a bit warm but still cozy. 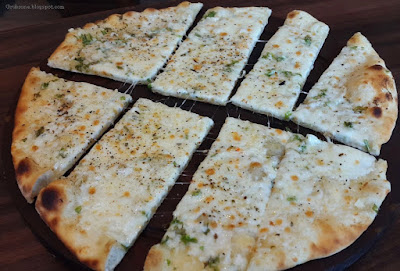 This was positively the best Garlic Cheese bread that I have had, ever. The portion size was generous, being a large flatbread. This was loaded with cheese and had a beautiful blend of savory flavors . To be honest, this felt as awesome as a pizza itself. I absolutely recommend the reader to try this. 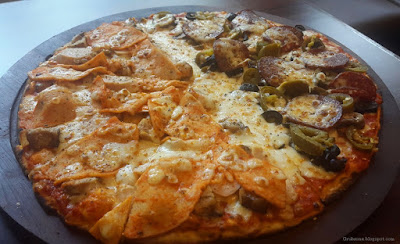 Half and Half Pizza. I love pizzerias that offer the option of combining two pizzas into one, I really do. In the picture is the Rapture Pepperoni pizza(Top right) and the Echo chicken pizza. I have no idea why these are named so but these were both delectable pizzas. The rapture combined aesthetics with the rusty meaty flavor of pork pepperoni. The Echo on the other hand is a traditional meat lover's pizza. It was loaded with cheese, chicken, chicken sausage and salami. Its the pizza you order for your pizza night or for the big game.

Captain : This water must be like thousands of years old. Hope I don't catch ancient bacteria.

Quartermaster : Quit yer yapping, we all have to wade through this pool. At least, it ain't deep.

Engineer : Hmm, I don't think the water is that old. It tastes very fresh. Like off a glacier ya know. 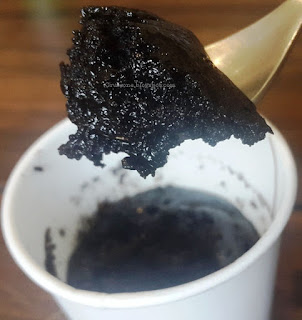 The gooey chocolate cake in a polystyrene cup was disappointing in both visuals and flavor. I was a bit too full to try their renowned cookie pizza but its the dessert to go for at Playlist pizzeria. Don't settle for anything else.

Captain : This be strange. This golden orb is the only artifact inside this shrine. And it seems that sea water falls on it and gets converted into fresh water.

Engineer : That's a treasure Captain. It solves an age old problem of getting potable water from sea water.

Captain : Yeah but I don't think these magic orbs are that common.

Quartermaster : Just take it. I don't think the townsfolk get their fresh water from here anyway. No one is gonna miss this ball. It will be immensely useful in our voyages.

The service was normal. Won't praise it or pan it.

The pricing was variable. A majority of their pizzas are of far higher quality than the likes of big chain pizzerias like Dominoes/pizza hut and cost lesser making them easy winners. There is a higher end of pizzas too like the Rapture and echo but these pizzas are of gourmet grade. Their pricing is similar to what one would expect at other gourmet pizzerias like CPK or Pizza Express. Though I do believe that their prices can be shaved off by 20%.

Playlist pizzeria is an interesting concept. It is still in infancy I believe and I would like to see it grow and reach other neighborhoods. This is definitely a place that I would like to visit again.

"
Captain : Good girl Nina, you led us to a treasure.

Captain : Though I am curious about how you knew this.

Engineer : Save that story for later Captain, lets get back to the main passage and get out of here.
"