Chaat which is a colloquial term for Savory snacks, is known at every nook and cranny of India. It usually consists of Potato based or Fried dough based snacks with local variations. North Indian Chaat and Mumbai Chaat are two famous variants that are known by any gastronome today. Being a resident of Mumbai, I am well acquainted with the Mumbai version. Due to my North Indian origins, I often visit the Northern side and thus I am initiated to the Northern Chaat. But I have not had enough of it to call myself a connoisseur.

Delhi is well known as a hot pot of Northern food culture and like Mumbai, its a metro with its own culture of Chaat. However, I cannot fly to Delhi just for snacks. This is where one of my famous restaurants Gaylords came in to the rescue. The "Purani Dilli ki chaat" festival was another one of the seasonal events at Gaylords. Translating to Old Delhi's Chaat, this festival brought the North to Gaylord's Tables. 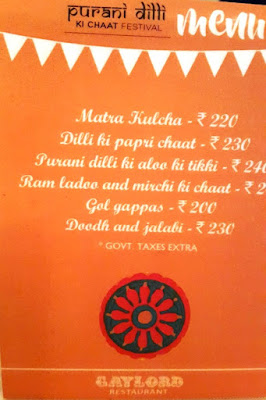 The prices may feel a bit high for chaat but its better than flying to Delhi. Additionally, Gaylords excellent hygienic standards make the chaat fit for everyone. Gaylord has found repute on Trip Advisor and many other portals. All for good reason. On that note, the prices feel actually easy to me. 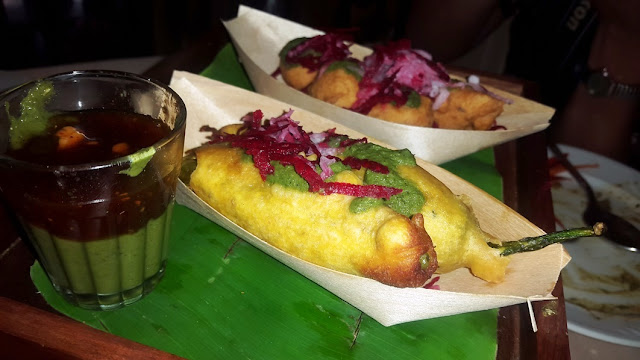 Ram Ladoo is the Northern version of Moong dal fritters or Dal Wadi as we call it Mumbai. This had a very basic moong lentil flavor as its meant to be complemented with chutneys. It was served with batter coated pepper stuffed with veggies. The flavor was subtle and easy on the palate. 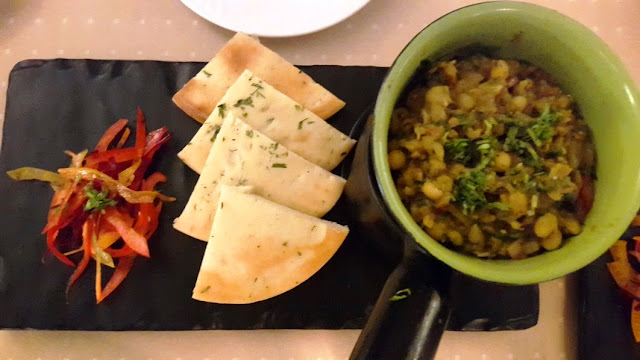 The Matra Kulcha may confuse even Hindi speakers. "Matra" is the same as "Matar" or peas. The Kulcha bread paired well with a savory snack made out of peas. This was the best dish on the menu. Good Visuals, lip smacking flavor and very filling on its own. More than a snack, this would qualify as a full meal. 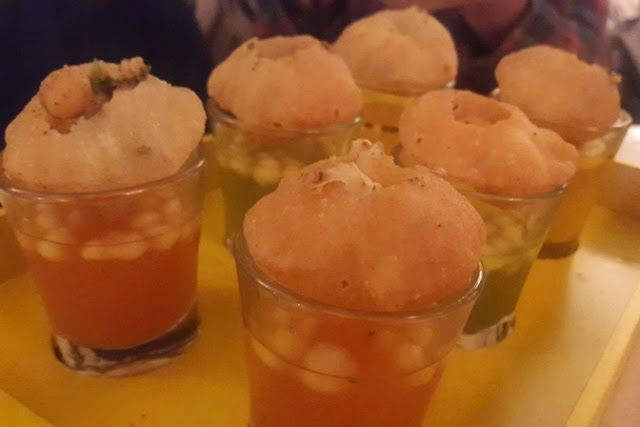 Ask anyone who knows me and they will tell you that I am not a fan of Pani Puri. In the North this is called "Gol Gappas". Don't get me wrong, this is delicious. My reasons for disliking it mostly have to deal with the unhygienic way with which its made at street shops. That problem is removed at Gaylord with these deconstructed Gol Gappas.

Instead of having a shoddy street vendor making this with his bare hands, I am safe with making these on my own. One must fill the hollow crusts with a chick pea based stuffing, fill it up with some chutney and quickly gobble it in one bite. Its actually fun doing the whole thing yourself. Gaylord served us three chutneys. I found myself liking the Tamarind chutney as opposed to the other two. 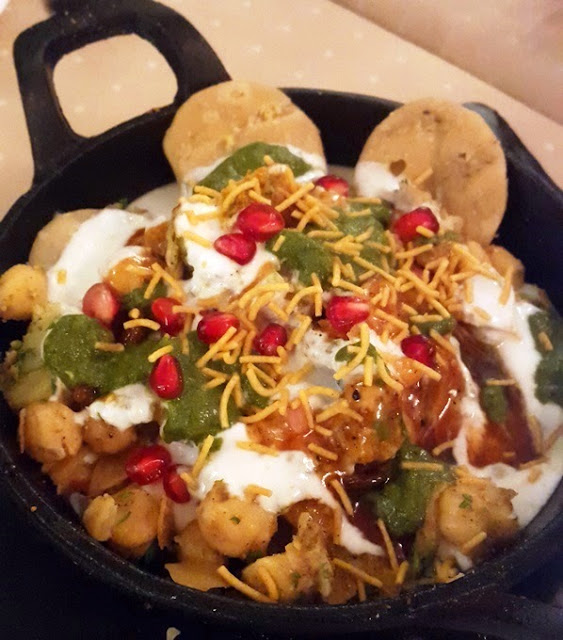 Dilli Ki Papdi Chaat - This one is based from North India though it is possible to find it in Mumbai. Gaylord's version was sweet and savory with a cooling after flavor from the addition of mint. Made of crisp dough wafers, these were loaded with sev, potatoes, chickpeas and pomegranate. It is a dish widely enjoyed by us Indians and one not to be missed by any tourist visiting India. 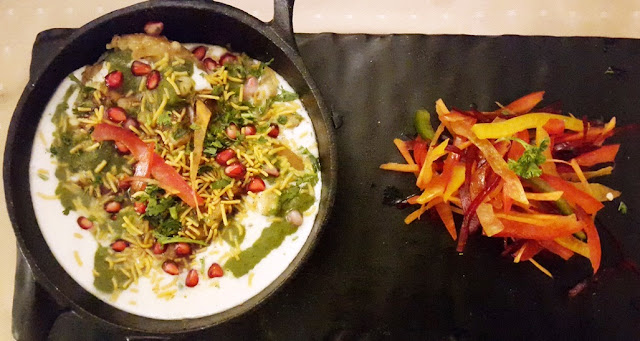 Purani Dilli Kil Aloo Ki Tikki. Literally translating to Old Delhi's Potato cutlets, these are minced potato cutlets immersed in curd and chutneys. A mix of sweet, savory and spicy this was one of the best things on the small menu. 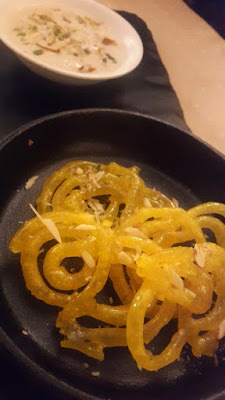 Fresh Jalebis with Rabdi (Condensed Milk based North Indian dessert) were served as desserts. The Jalebis were to be dunked in the Rabdi like oreos in Milk. I preferred having both separately. These two are commonly found in Mumbai so these were flavors that I am well acquainted to. While these did not feel special, these were certainly delicious.

This concluded my tasting of the Purani Dilli ki chaat at Gaylords. The service was a bit slow and I had to remind them to provide me cutlery and drinking water but otherwise it was a good experience.

Posted by Rishabh Mittal at 4:55 pm No comments:

Tuskers is the only pure vegetarian restaurant inside a Five star property in Mumbai. Located inside Sofitel in BKC Mumbai, the restaurant feels like a different world in the otherwise French themed Sofitel. However, the place has a certain charm to it which can be felt by both tourists and locals. With no shortage of purely vegetarian places in Mumbai, one must wonder why Tuskers?

The location immediately cuts out the noisy and undesirable crowd for one. The experience of veteran Chef Maharaja Jankidas Vaishnav (Lets call him MJV for now) is another thing. The man loves his job and when I found that he personally traveled to some of the most remote locales of India in search of new dishes for his new menu, I just had to sample his find. Beats traveling by back roads to rural places that I have never heard about. 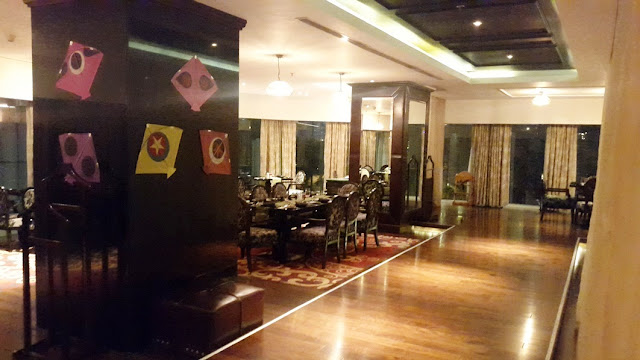 The set up was very typical of a fine dine inside a five star. Golden dimmed lights and fancy furniture were the first things to catch attention. Some faux elephant tusks in form of plastic decorations hung around the place. The kites visible in the picture were a temporary addition to observe the Kite festival. The basic set up reminded me very much of Artisan downstairs. 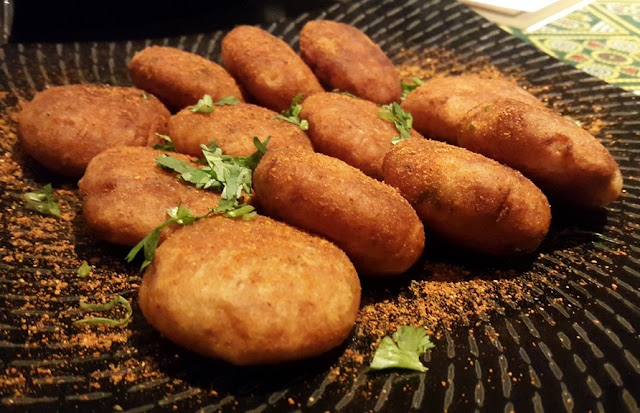 Ratalo Ki Tikki were soft Ube (purple yam) cutlets. These were spicy, savory with a cornmeal like flavor. The dry texture was well complemented with the chutneys served along with it. 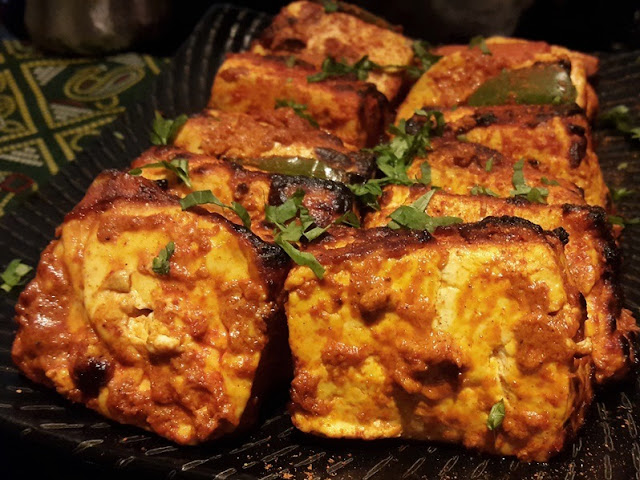 Mathania Mirch ka Paneer was paneer wrapped in a spicy chili mix sourced from the village of Mathania in Rajasthan. The flavor felt like a mix of tandoori paneer and a bit of Achari(pickled) flavor. I wouldn't say that is a bad thing but I did expect something unique out of this one. 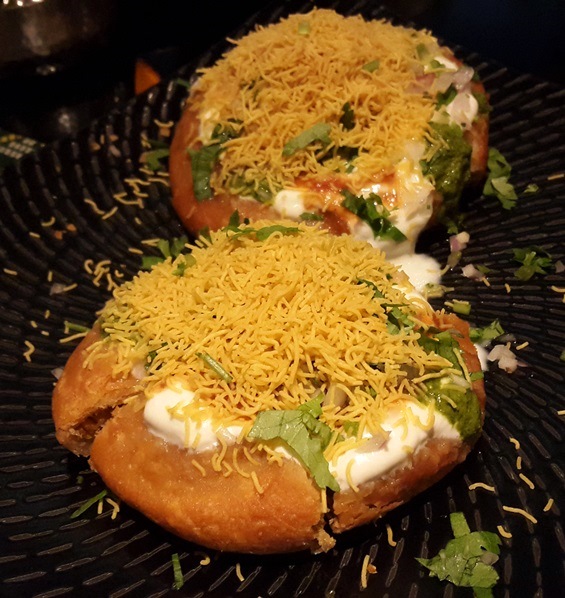 Pyaaz Kachori was definitely the highlight among the appetizers. Unlike most items on the menu which were rarely heard of, this was a well known item in North Indian locales. A flavor commonly found in Delhi and Jaipur. The Kachori was very savory with the flavors of sev, curd and chutney orchestrating a perfect harmony. 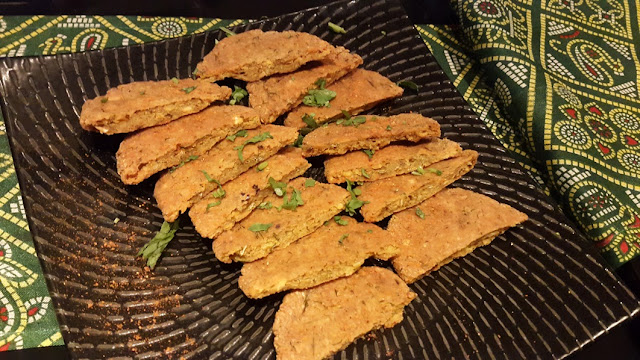 Suwa Dal Wada tasted much like the regular Dal wada found in Mumbai. The addition of dill was unique and its dry texture was typical of the food made in the desert regions of Rajasthan and Gujarat. I however found this a little too salty for my liking. 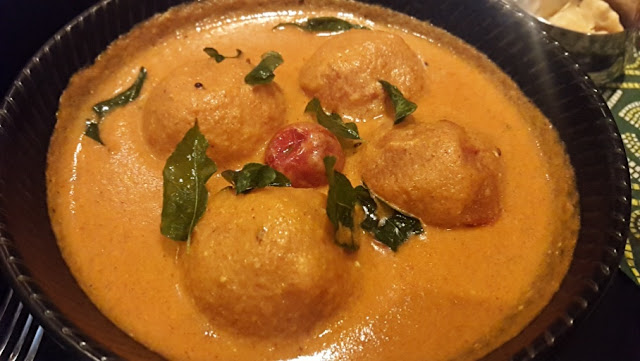 Sangri Ke Kofte were vegetable balls made of potato, spices and the treasure of the desert - Sangri. Sangri is a bean that grows in the arid regions of Rajasthan. From being initiated into Rajasthani cuisine as a means to survive when no other vegetables were available to evolving as a top quality ingredient used to make wedding dishes.

These soft Koftas were immersed in a gorgeous orange gravy made of cashew.  The flavors were spicy, subtly pungent and a bit of fennel could also be felt. This dish cannot be found elsewhere. So if you are in Tuskers, this dish must be on your table. 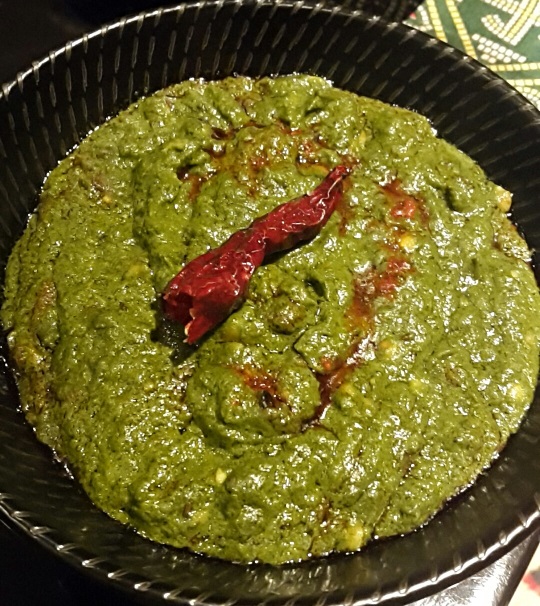 Suwa Palak chana Dal was a dish with very thick consistency. It was primarily made of Spinach(palak) and chana dal which made it rich and delicious. The flavor also had subtle hints of dill. I have had Lentil soups (Dals) and Indian Spinach preparations before but this was something completely different from either.

It felt very West Indian and I could feel myself transported to the rural Rajasthani - Gujarati locales. And for me, food that evokes memories or transports your senses to a place far away is absolutely the best. 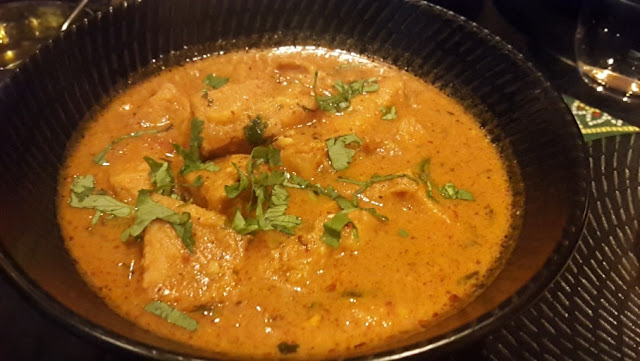 Rajwadi Dhokli is a take on Dal Dhokli which is basically chickpea dumplings immersed in a strong curd based curry. While it carried the pungency and the savory flavor of Dal Dhokli , this variation was quite salty which is typical of a desert dish. It went well with the served breads as the breads reduced the salty sensation. 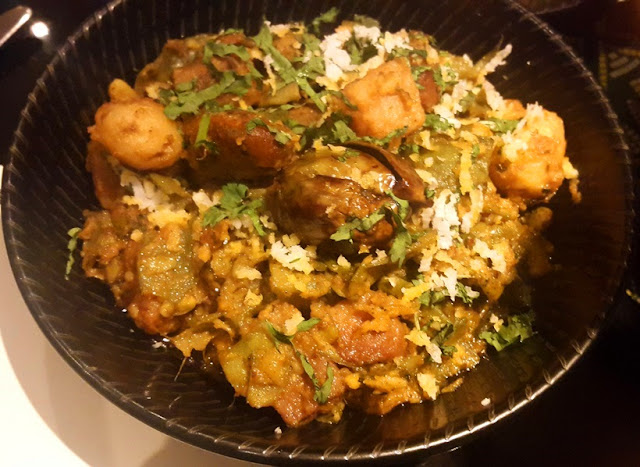 Kathiyawadi Undiyo is a colorful dish with a depth of flavors from the Saurashtra region located at the westernmost tip of India. India is a colorful tapestry of varied cultures and infinite culinary treasures and Undiyo itself has three different variations. This variant was full of pot cooked vegetables and spices. It carried the flavor of coastal Gujarat and the hot summers of Saurashtra. The dish is a vegetarian's delight with savory and spicy flavors. The aroma is very earthy and appetizing. Another must have dish from the new menu. 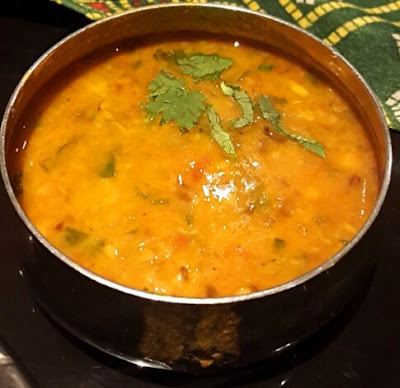 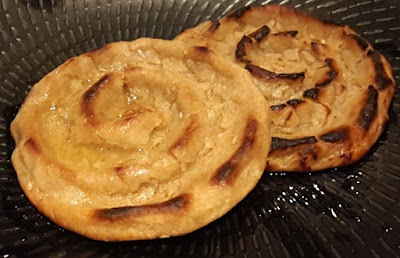 Dal Panchmel was a lentil soup made out of five different Dals(lentils) forming a flavor completely different from any of the five dals taken individually. It was very similar to the popular Gujarati-Rajasthani lentil dish found in many restaurants known as Dal Paanch ratna. It went great with the Rajasthani Khoba rotis which were spiral breads with many indentations. 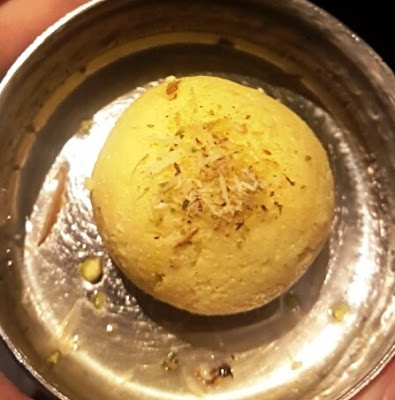 I ended the meal with a Raj Bhog which is an improved version of Ras Gullas. These sponges were full of crushed dry fruits and were sweet and juicy inside. The experience was not much different from the Raj bhogs sold in Indian Mithai shops. Dry fruits were once considered a luxury afforded only by Royalty and nobility. Hence, its apt that its called Raj Bhog which literally translates to Royal delight.

The service was professional and as this was a chef's table, Chef MJV also gave us a bit of wisdom about the origin of each dish. This is stuff one cannot google and formed the basis of this post as well.

The pricing is typical of what is expected inside a five star Hotel. It is on the higher side but the restaurant has been popular with the local folks as well as the tourists residing in the Hotel. It is another one of the must visit places for any epicure in Mumbai.

I will admit that I prefer non vegetarian food over vegetarian and quiet meals for two over a communal table full of bloggers. But the experience at Tusker's was on a level of its own. The grub was delicious and a delightful experience. Have a taste of the finest food from Gujarat and Rajasthan at Tuskers.