There was this one episode in a satirical TV show where central characters manage to get into a fancy uptown restaurant only to be disappointed by the overly expensive minuscule portions of tasteless food.

Runaway project which tries to bankroll on the "goodwill" of its parent concern PizzaExpress is a real world example of that satire.

Located in the noisy second floor of the new Skyzone wing in the Phoenix mall complex, this restaurant has a classy lounge like ambiance where any notion of classiness fades away due to the deafening loud music that they play. Apparently, there is a competition going on between Runaway, Soda Bottle openerwala and Chili's where each tries to outdo the other by raising their volumes. The scene is worse than a foul mouthed politician's rally.

My small group decided to order two pizzas and an appetizer. Let me tell you that the pricing here is unforgiving. It is more expensive than the likes of Indigo and the food is neither good in quality nor quantity. I sometimes wonder if they are just extracting the prime location's expensive rent from the customers.

Here is what we ate : 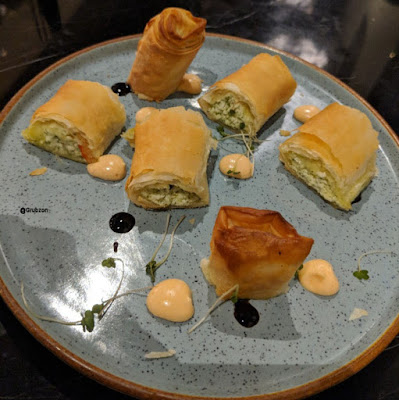 Cigar Club - Described rather fancily in the menu as Filo cigars of cottage cheese and marinated roasted peppers, spiced mayonnaise and balsamic glaze.

I wonder if they got a PR professional or a Food Blogger to write this fancy piece of falsehood.
The Spiced mayonnaise and Balsamic glaze were nothing but a few droplets sprinkled randomly in the ugly presentation above. Cottage Cheese translates to paneer here so its rather a cheap Paneer pastry snack that you can buy in most local street bakeries in Mumbai. The taste was dry and it required a dip like accompaniment which seemed to be missing. And I'd rather not call these six small pieces of puff pastry as cigars. Not to mention if your are paying INR 475 plus taxes for this - you expect a satisfactory portion size and a little bit of effort into making it look appetizing. 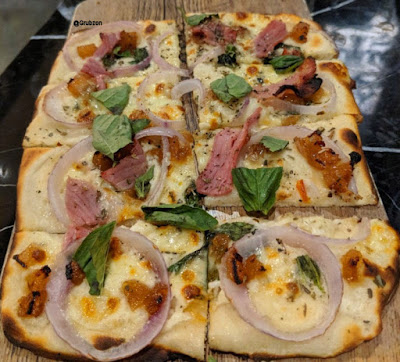 Hawaiian Pizza -  The Pineapple on pizza trope might trigger some pizza enthusiasts but fear not, they replaced actual pineapple with Pineapple paste(chutney). This pizza which is priced at an unforgiving INR 625 plus taxes, was smaller than the smallest of pizzas offered by most pizza exclusive places. It was rather unsatisfying to say the least. The menu strangely doesn't even mention the carpet bombing of Basil. The basil leaves completely ruin the flavor profile of this pizza. It seemed like a last minute addition by an inexperienced but over enthusiastic chef. 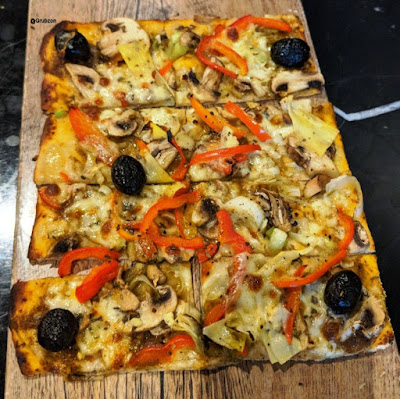 Giardiniera Pizza - Recommended by the server for the vegetarians in the group, this was a visually displeasing and overdone pizza (Burns on the crust). Needless to say that it was too less even for one person  - let alone be split by two people. The only thing big about this pizza was its name, one wonders if it was actually suggested by Dr. Shashi Tharoor.

This was definitely not worth the INR 625 we spent on it.

As the grub was far from satisfying or filling - we ended up going to Chili's next door to fill ourselves up. While there are similar expensive places around the city - the portion sizes there at least fill one up. Indigo has gone down in quality over the years but its pizzas at least feel satisfying, the same can be said for the pizzas at a place like Pizza by the bay.

The Runaway Project only appears to work on fancy nomenclature and paid promotions via "prominent"(but misleading) social media personalities. The ambiance is killed by the overly loud music, the pricing is bad and the food fails on all fronts.

Would I recommend Runaway Project to anyone? No.
I'd have to say at this point - if you want a drink  - go to any bar themed restaurant in Phoenix. If you want a pizza go to Indigo or Francesco. If you want good mains - Go to Smokehouse or Delhi Heights.

Posted by Rishabh Mittal at 6:52 pm