Mango, India's favorite food has the effect of driving the majority of the Indian population wild. As soon as the mango season begins, people crowd up at fruit stores buying them like hotcakes. Actually in India, one must say that hotcakes sell like mangoes.

I proudly declare that I am not in that majority. Nope, the fruit's presence or absence doesn't affect me. But Mango desserts are another story, they give me a high. I dropped by last week to sample a special menu of Mango based desserts at the Sin patisserie within Hotel Marine Plaza.

This seasonal special menu would last till the mid of June. 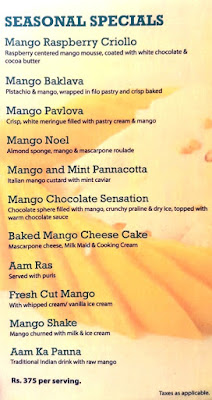 The Special Menu.
At INR 375(plus Taxes) per dessert , the place actually offers cheaper desserts than the likes of a place like Indigo Deli. The desserts are made of premium ingredients and have a great flavor. There is no compromise on quality. 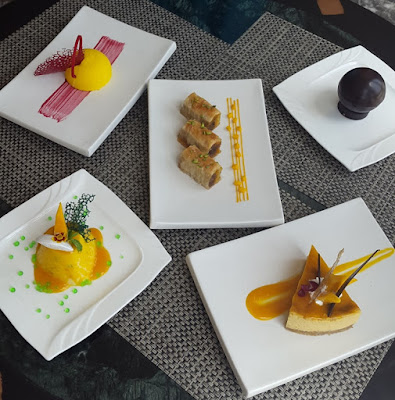 This platter would make most of humanity salivate in front of their screens.

Aam Ka Panna would be India's favorite summer drink. Sweet and sour in flavor, this spice filled beverage isn't really a dessert but one could never have a Mango themed menu in India without the mention of this. 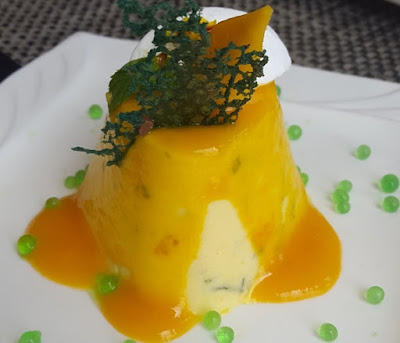 Mango and Mint Panna Cotta was a delectable panna cotta topped with a thick Mango paste and Mint pearls. Though initially I was a bit disappointed that it was Mint and not peppermint, the rich flavor of the cream made up for everything. I gobbled this up in a jiffy. 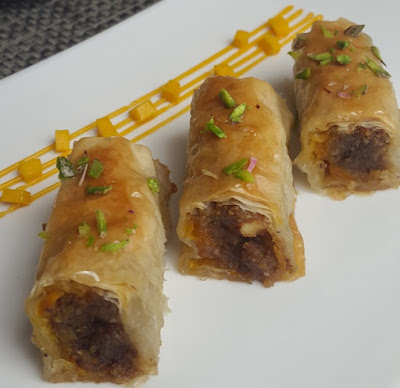 Mango Baklava is probably something that the Ottomans and the Greeks would never have imagined. The chefs at Sin took this old world favorite and gave it a Mango Twist. The result was classical Baklava with a perfect mango infusion. Baklava itself is rare to find in the city and Mango Baklava may just only be available at Sin. Though not aesthetically pleasing as its colorful counterparts, this was one of the high points of the seasonal menu. 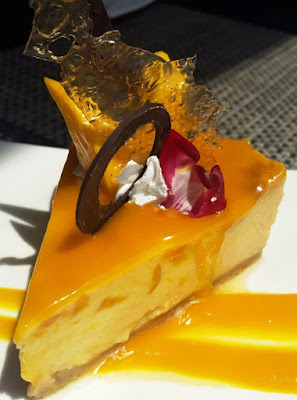 Mango Cheesecake in my opinion was the best dessert in the menu. It delivered in both visuals and flavor. Not only was it the prettiest of the lot, its flavor was quite amazing. Unlike Cheesecakes at other places where vanilla cheesecake is merely topped with a compote, this truly was a mango cheesecake. The cream cheese and Mango had been perfectly fused together. The texture was smooth and perfect. Mango's sweet and tarty flavor combined with Cheesecake's original sweet flavor was quite a party in my mouth. 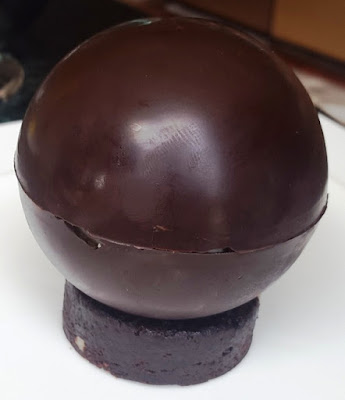 Mango Chocolate Sensation was Sin's take on the popular melting chocolate ball. Though these balls have long lost novelty due to being too common, these still make an excellent dessert for a bunch of food shutterbugs. I was disappointed with this one though. The flavor of the mango was far too subtle and as far as Chocolate ball desserts go, this was too mediocre. 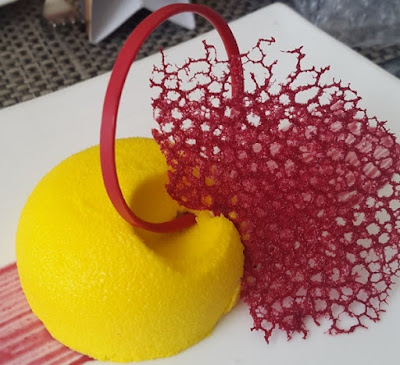 Mango Raspberry Criollo was a delicious comfort dessert. Made with a Mango mousse centred with a Raspberry compote, the hero of the dish was undoubtedly the raspberry. While the mango served as a nice and alluring exterior, the flavor profile was dominated by the Raspberry. The dessert was however one of the best on the menu. Again like the cheesecake, it was both visibly pleasing and quite delectable.

This seasonal menu is said to last till the Mid (15th) of June, 2017. That is about the time when the Mango season goes offline from India and the Monsoon sets in. If you are a dessert fanatic like me, don't miss this opportunity to sample things like the Mango Cheesecake or the Baklava.


-I was invited to sample the seasonal menu by the Restaurant. My review however remains objective.-

Posted by Rishabh Mittal at 6:35 am