Me voyage to the Emerald isle left me with fool's co-ordinates. Fool's co-ordinates are locations which don't exist on a map. I should not have trusted the old scammer. But yet there was something intriguing about the numbers. Besides how did that old man know about my quest for the Blue compass? I kept staring at those numbers as if hoping that they will reveal something, anything. The Engineer came into me cabin and told me to take a break. We climbed back to the top deck as I saw lights in the distance.

We were approaching a coast. The strong winds made the sails flap like a bird's wing. The smell of the warm coastal seas filled the ship. Maybe some good grub will get me head thinking. I directed the crew to find a cove to dock the ship at as the landing party got ready set out. At the same time I wondered what happened of the hostile ship with the black sails, we haven't seen them for days. 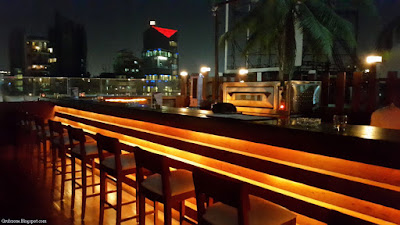 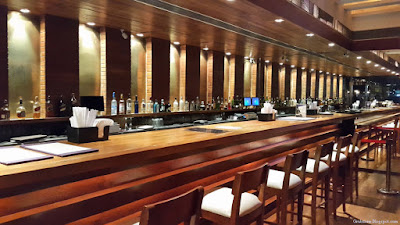 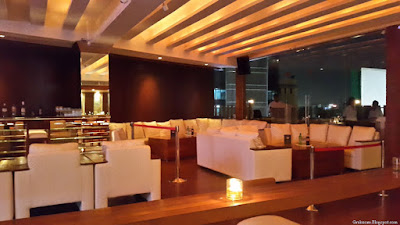 Escobar is one of India's largest bar. It boasts of an impressive golden lit indoor area and a gorgeous rooftop area from where one can see the entire Bandra skyline. But despite its humongous size, it can be a wee bit hard to find for a first timer. It is located on the fourth floor of a building that looks more residential than commercial. Escobar was the victim of an unfortunate incident last year causing it to close down. But like a magnificent phoenix, it rose from the ashes and it is a beauty to be admired for those who can find it.

Once found, the comforting ambiance will make one feel truly special. One can sit for hours inside Escobar enjoying the grub, the grog or the skyline. 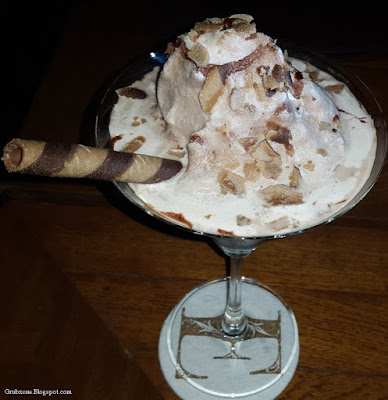 The Twisted Chocolate Martini caught my eye instantly. This beautiful drink was made of Vodka, Chocolate liqueurs, white chocolate, dark chocolate and cream. It had a mild kick to it and felt much like a Chocolate milkshake meets martini kind of thing. The Iceberg in the middle slowly melted away supplying the drink as a glacier supplies a river. The chocolate wafer added a nice visual touch though did not seem to blend in with the drink. In totality, this was a very relaxing drink.

Captain : This be one of me favorite drinks.

Captain : If only he could tell me where the Blue compass is. 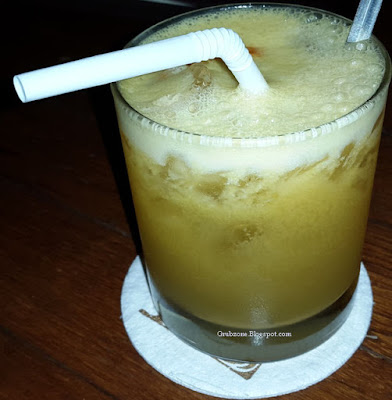 Jack Punch was a mix of whisky and ingredients one would find in a fruit punch. The punch was heavy and hard. It contained passion fruit, pineapple and a hint of angostura bitter which provided a subtle twist to the punch. A more suitable drink if you like your cocktails rough. But strangely the weight of the world felt lighter after having this.


Escobar calls itself a Tapas bar. Drinks and small plates for those uninitiated with the global lingo. The small plates pack big power into them. These were some of the best bar nibbles I have had. 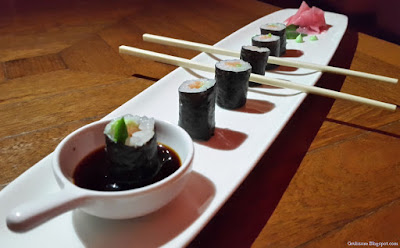 Smoked Salmon Maki Roll or Sushi was a soft subtle creation with the perfect mixture of salmon, sticky rice, and greens. I enjoyed this a lot, though I was a little disappointed with the meager quantity of wasabi served. I enjoy my Sushi with wasabi. 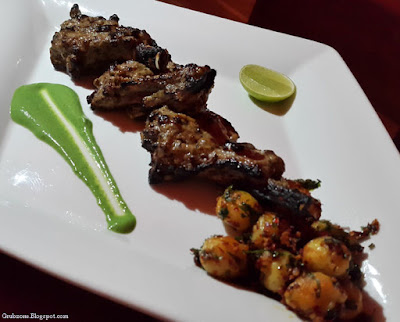 New Zealand Lamb Chops - The Kiwi know how to feed their sheep. The meat was tender, juicy and delicious. The cuts were made in such a manner that there was a lot of meat and it fell right off the bone. These were rubbed with Indian spices and roasted in a clay oven. This added the flavor of a Tandoori Barbecue to the meat. Each bite was an explosion of addicting flavors. Tandoori nights with hearty grog, me likey.

Crewmate : Wish I could say the same but you never leave any for me.

Green Herb Roasted Rawas was like a Star Batsman getting dismissed on a duck on the very first ball. This tender boneless salmon was cooked in a coriander sauce and spices. So far so great. However it suffered from two problems. It was too green, too brilliantly green. It is not supposed to be Chicken Hariyali. The other problem was that it was too salty. Even water felt sweet after it. 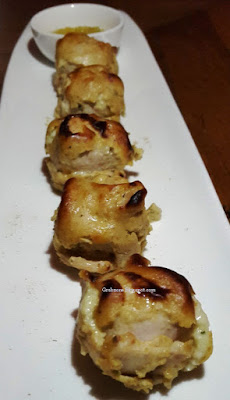 Roasted Cheesy Chicken - This was a tender chicken kebab, filled with cheese and marinated in yogurt and spices. It was then slow roasted in an oven giving it a mix of tandoori and western flavors. This was among the best things of the night. A dish so tasty that one could fight with the most beautiful woman for the last piece. The core hid a treasure trove of flavor which was released as soon me teeth reached breached it.

Crewmate : Lets hope they died or something in a sea storm. Their attacks were so troublesome.

Captain : Battle and endurance is part of every sailor's life.

Crewmate : Its hard with yer Captain eating all yer grub too. 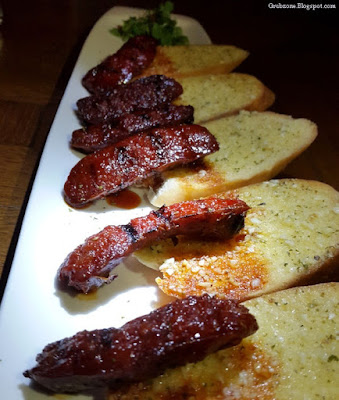 Chorizo Tapas was another one of the better items of the night. The salty savory fried sausages went well with the drinks. The garlic bread underneath felt like a bit of a mismatch, perhaps a smaller and thinner portion of bread would have worked better. I found myself separating sausages from the breads. 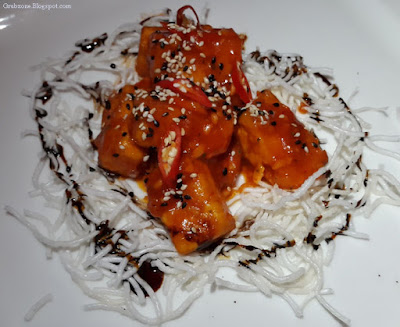 Smoked Cottage cheese in Chilly Oil was an amazing dish in terms of visuals, aroma and the flavor. This paneer had an earthy flavor which complemented well with the chili. It was sprinkled with black and white sesame. It was presented stylishly with some rice noodles.  This would easily go well with drinks of all kinds. 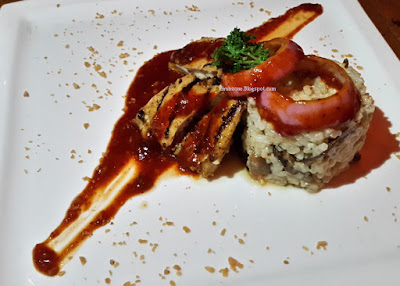 Burnt Garlic and Thyme Rubbed BBQ Chicken was simply stupednous. I did not expect a place specializing in Tapas to have a main that would taste so well. These juicy chunks of chicken were smoked and then char grilled giving them a tongue seducing BBQ flavor. If one is a big fan of BBQ then this is must have dish for sure. The Porcini mushroom risotto was also quite earthy and delectable. Both the rice and chicken were scrumptious together. A marriage made in a kitchen. 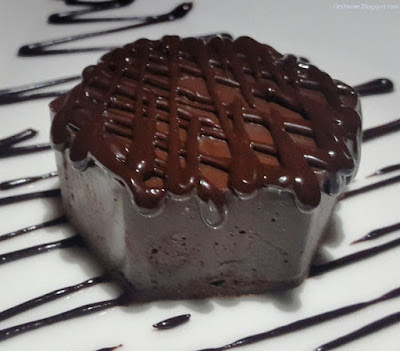 The Excelsior - Imagine all the cream on top of dark chocolate pastries being condensed to form a dessert of its own. The Chocolate Excelsior was exactly that. This little hexagonal prism despite looking pretty was overly sweet and a little sickly with all that chocolate. This comes from someone with a sweet tooth and penchant for overdosing on desserts. 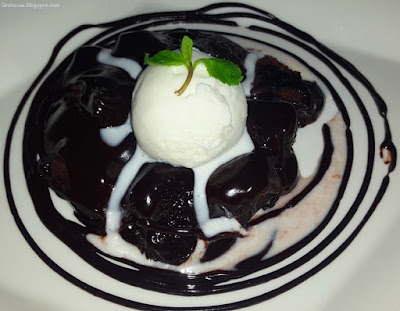 Chocolate Gooey Cake was ultra dense, sweet, decadent and the best thing since sliced bread. I never thought that I would say this in an era of Cheesecakes and mousses but this Cake was absolutely heavenly.  An old favorite super perfected by the good folks at Escobar. I have not had a good and "real" dessert like this in a very long time. I scrapped the plate clean, not even leaving a single crumb behind.

Crewmate : Are you going to go high on dessert?

Captain : No lad, those were the old times. I have adapted. 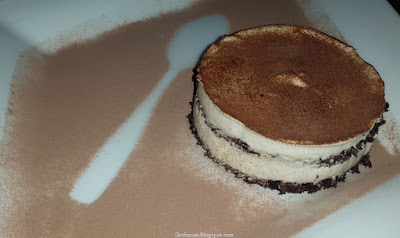 Tiramisu was sweet and bitter, soft and creamy and absolutely well made. Though not the best I have had by a long shot, this Tiramisu was perfect by text book definition. It may pale in front of the Chocolate gooey cake especially if one is having both like yours truly. Best make this your first dessert.

Escobar may be on the higher side of the pricing scales. But the ambiance, the food and the drinks are worth every penny spent. The place is a luxurious retreat. The moolah is well spent here. Like Godiva is to cadburies, Escobar is to most watering holes.

I cannot comment on the service since this was an on the house meal and we were personally attended to by one of the managers. However, observations suggest that the place is well staffed and the servers are usually polite and pleasant.

Escobar was one of my best experiences in Mumbai and makes it to my personal Top ten bars for Mumbai. The place is the complete package. Captain says, go forth and chug yer grog at Escobar.

"Captain: Time to take the ship out...


(Loudspeaker from Black sailed ship)
Rogue Captain : Found you, you won't get away from us now.
I am Captain Peter, Peter the Cheater.
Hand over yer map and all yer hard earned treasures.

Captain : Sorry, can't hear you over the sound of how I awesome I am.

Rogue Captain : Prepare for Battle then.

Captain : Bring it on cheater.
"


-The food was on the house as I was invited by the restaurant's PR to sample the grub. My review however is objective.-

Posted by Rishabh Mittal at 2:06 am