I am not a stranger to strange things but nothing made sense till one of me mates lit up a match which briefly flickered till the wind put it out. There was a small tunnel inside the building walls. It wasn't big enough for a man but large enough for a cat. Nina used this passage to come to us but how did the little fur ball know about the tunnel to begin with? Cat Magic? These questions would be addressed later. There was a loud noise up ahead. It was almost as if there was a storm somewhere. But how does such a small structure have a colossal abyss and such strong wind within it. Cautiously our party walked ahead, leaving the abyss behind.

To me, people are defined by what they make of the space given to them. As new eateries and new restaurants pop up like never before, it is important for a restaurant to have something unique that etches itself onto the memory of its visitors. 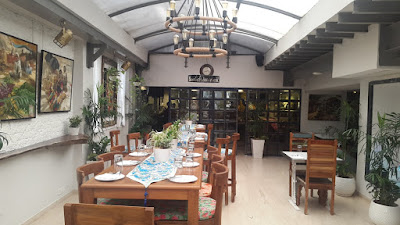 Veranda, located inside the Executive Enclave Hotel is a place that enchants you with its art gallery inspired ambiance. The place sometimes feels like a royal palace of a lost age with all of its decor and splendor. The Rohra brothers(Owners) have taken great time and designed the place very tastefully. Elder Brother Rahul is a man with an eye for details. He came up with the decor for both Cafe Terra (Located on top of the same building) and Veranda. And one has to admit that both places score highly on the ambiance. For the art connoisseur, the paintings rotate after a period. 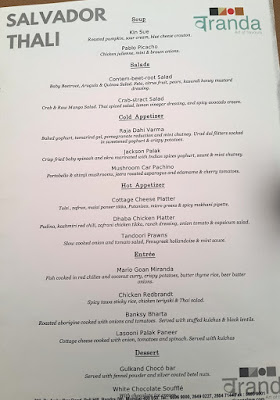 I don't do drugs, I am drugs.
Younger Brother Monish is a chef who has extended the artistic themes to the menu. With dishes like chicken Redbrandt, Banksy Bharta, Raja Dahi Varma and Mario Goan Miranda - One can see the homage paid to artists from all walks of life. The dishes in most part do justice to their namesakes. 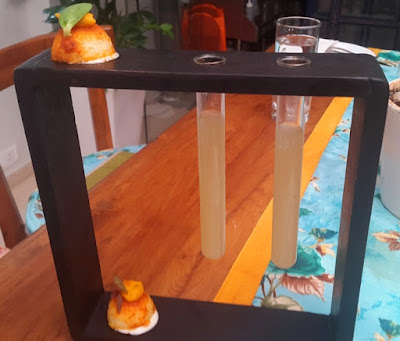 The Amuse Bouche was made of a spicy-tangy drink and mini idli coated with gunpowder. An excellent first course as it invoked my appetite. 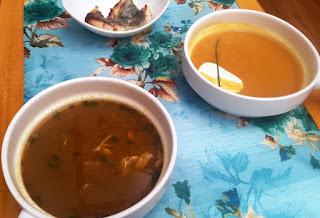 Pablo Picacho(left) and Kin Sue(Right) made an excellent soup based second course. The Pablo had a very Indian flavor to it and had pulled chicken julienne with mint and onions. It was a thin soup with a lot of flavor. The Kin sue was made of pumpkin and sour cream. It was a creamy and flavorful soup that was quite addicting. The pumpkin flavors signified the onset of Autumn. It was served with blue cheese croutons which made it a top notch fine dine experience. 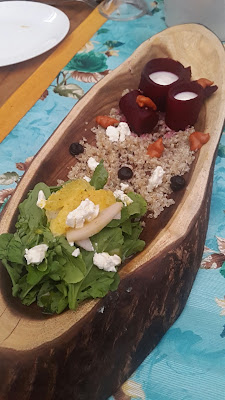 Contem Beet Root Salad was a boat load of stuff. No pun intended. This mixture was comprised of Quinoa salad, Rocket drizzled with Kasundi honey mustard and cups fashioned out of hollowed baby beetroot with hung curd inside. The salad was both a visual spectacle and was full of sweet, tart and savory flavors. This had to be one of the best salads I have come across. Bonus points for artistic creativity.

Captain : This gigantic chamber seems to be the source of the wind.

First mate : I have been thinking. Have you lads heard about the Chest of storms?

First mate : Indeed, as is the blue compass. 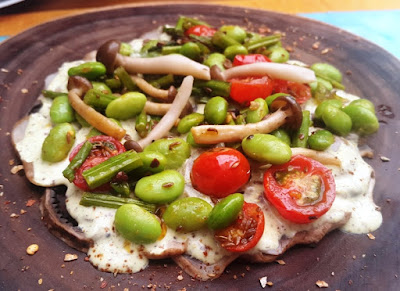 Mushroom Car pachino was made of portobello and the rare(+expensive) Shimeji mushrooms. It also had roasted edamame, cherry tomatoes and asparagus. The dish was smoked in a Hickory chamber lending to it a distinct rustic flavor which I have not experienced anywhere else in Mumbai. The dish was colorful, healthy and full of mildly savory sensations. If you are a vegetarian then this is a must have. 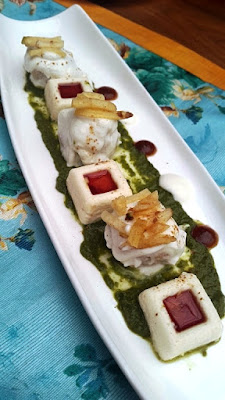 Raja Dahi Varma was a piece of art. When it was served on my table, it looked so pretty that I did not want to damage and eat it, ha. Baked yoghurt was used to make the square structures which were filled with Tamarind gel. The crisps were made of potatoes and were placed on a dollop of sweetened curd and Urad dal flitters.

This dish was as beautiful with its flavors as it was with its appearance. It tasted very much like Indian curd based street foods like Dahi Kachori or Dahi Bhalla but its appearance was unlike anything I have ever seen. This is an absolute must have for anyone who visits Veranda. Raja Ravi Varma would be proud. 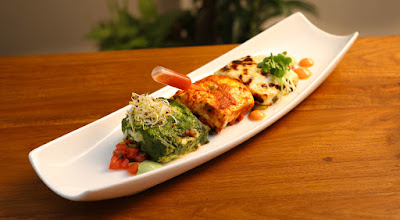 Image Courtesy Zomato/Veranda
Dhaba Chicken platter was made of three popular Kebabs. I quite enjoyed this platter. The Green Pudhina(mint) Kebab was full of juicy hariyali flavor. Kashmiri red chili was a spicy and a strong flavored kebab. The Zaffrani Chicken Tikka combined the popular tikka flavor with a bit of creaminess. I was upset that this got over so fast but it made an ideal bar nibble.

Captain : Its cold here but the wind (gulp) seems to be coming from inside this... 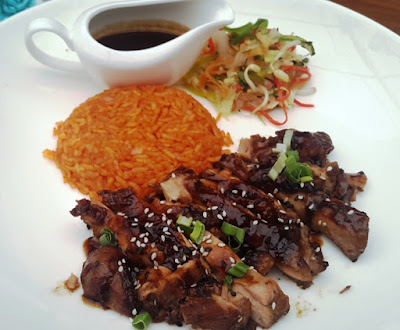 Chicken Redbrandt was a red themed dish with Chicken Teriyaki, sticky spicy Tawa rice and Thai Salad. The rice was full of flavors and tasted well on its own. It complemented the mild flavored Teriyaki Chicken really well. This was the quintessential main one seeks at a fine dine restaurant. 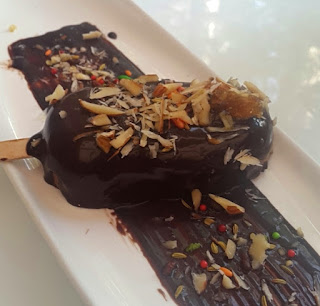 Gulkand Choco bar was something that would have been perfect for Masterchef's visual illusion or food deception challenge. Styled like a Chocolate Popsicle, this isn't its namesake in reality. Its an eggless chocolate mousse that looks simply amazing. The mousse is soft and airy. The dessert was good though the almond flakes could have been lesser and the Gulkhand(rose) flavoring a little more prominent.

I cannot comment on the service presently since most of the things were served by Monish himself and the crew was being trained. The place is brand new and growing up at the moment.

The pricing is on the higher side as the restaurant is a fine dining installation. The creativity and the effort put into some of the things does merit the price. I felt that the prices were mostly satisfactory as far as quality and portion sizes go.

Veranda is going to be big in a few months. It will be a popular feature in food magazines and articles alike. Everything seems to work for it. But I feel that one could exploit it while it still remains to be a hidden gem. The food and the wonderful ambiance without the long queues and reservation hassles is an early bird reward.


First mate : See. No more wind. Do you understand how useful this chest can be to us?

Captain : Light up your matches lad. Lets see what we are into.

Captain : What the? This chamber isn't as big as we thought.

First mate :(walks back) Look at our "abyss".

Captain : What the? That must just be about a hundred feet below. But it felt so deep while climbing.

Posted by Rishabh Mittal at 4:49 pm