Yauatcha derived from the Chinese words Yum Cha(meaning tea and Dim sum house) is a classy fine dine that is popular for its dim sums(or the most famous of Chinese dumplings). Though it does have other things on its menu, the place is best visited for dim sums.

This isn't my first post on Yauatcha as I had been here for a festival last year. I thus won't be covering ambiance or service in this post as those have remained exactly the same as the previous time.
You can read my older post over here :
http://www.grubzon.com/2016/06/yauatcha-bandra-kurla-complex-mumbai.html

So let me pull a Dan Brown here and jump straight to the action, The Food.

I was here for a Blogger's meet to sample some of the newest additions to their menu. A communal table blogger's meet often ends up with things being disproportionately divided between bloggers. So I will write about things I was able to sample properly. 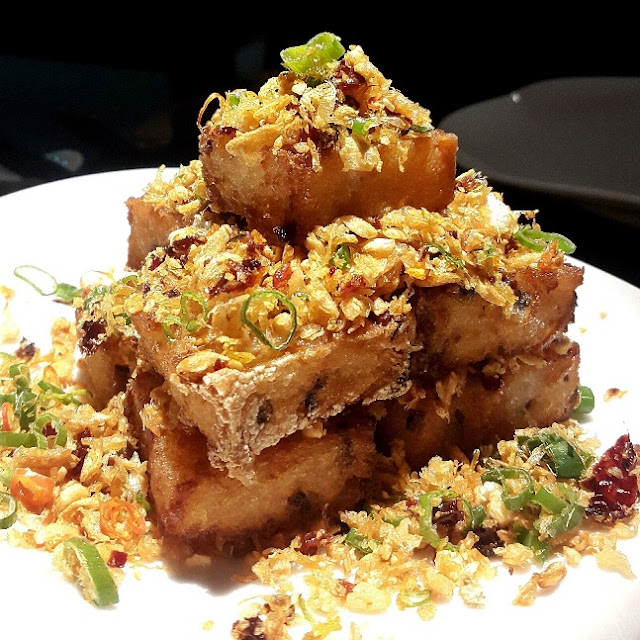 Fried Turnip Cakes were dry in texture and quite savory. The flavor felt very similar to savory cakes that I have had in India. The appearance was an accurate rendition of Turnip cakes eaten in East Asia and abroad. This was my first experience with these and all I can say is that I thoroughly enjoyed these. There was somehow a familiar feel to the flavor. Vegetarians would love these savoury cakes. 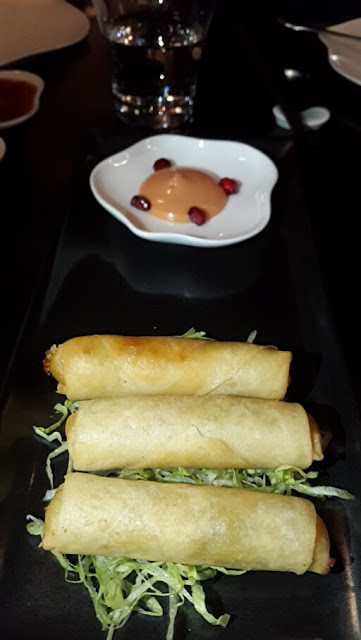 Crispy Asparagus rolls had a subtle savoury flavor of corn and a pleasant asparagus undertone. There were hints of spices but otherwise this was a very gentle on the tongue dish. This would complement well with various Chinese teas like Jasmine tea. In essence, these rolls with piping hot tea capture the true spirit of a yum cha. 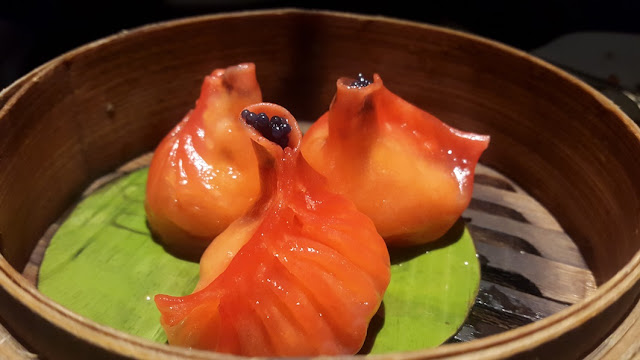 Spicy Hargau dim sums were pretty little things that were gently spicy and had an earthy feel to them. Another treat for the vegetarians though I felt that more effort was put behind the optics than required. Nonetheless, this was a unique experience. There are a few places in Mumbai that serve Hargau and I would definitely vouch for Yauatcha’s experience. 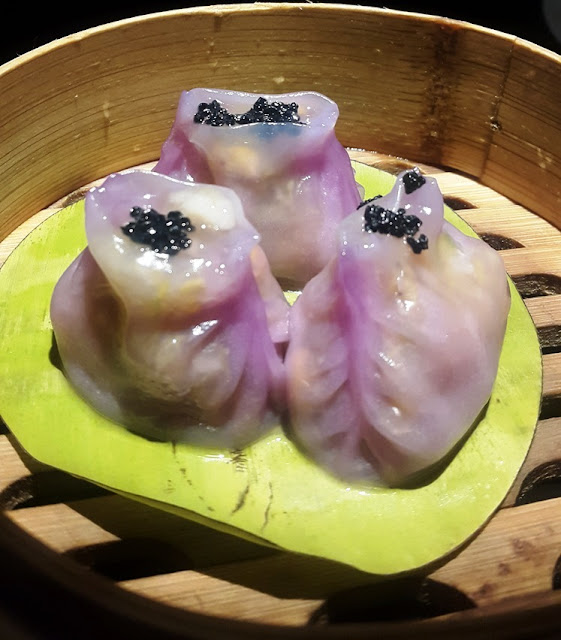 Crunchy Iceberg dumplings topped in terms of optics but the flavor felt a bit on the flatter side. The dim sum was not crunchy enough for its name. The thing that worked for this dumpling however was its rural flavor. One could feel as if this was food from the refreshing countryside. 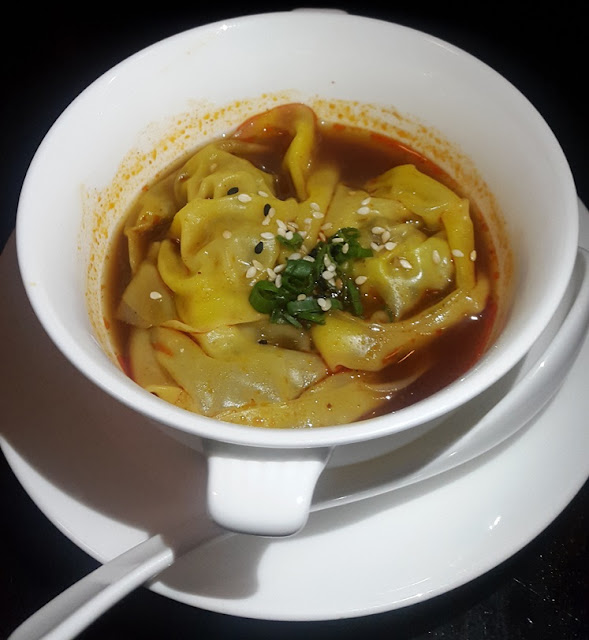 Spicy Pork Sichuan Wontons - These were very delicious and one of the highlights of the menu. This item is popular in the Yauatchas abroad and I am glad that this finally made it into India. Served in a traditional bowl, the wontons were submerged in a savory soup. This is the correct way of having wontons though we were used to having dry fried wontons in India.

The flavor was a mix of savory, sour and salty. There was an undertone of peanut and these dumplings were easy on the palate. Contrary to its naming, I felt no spiciness in this. 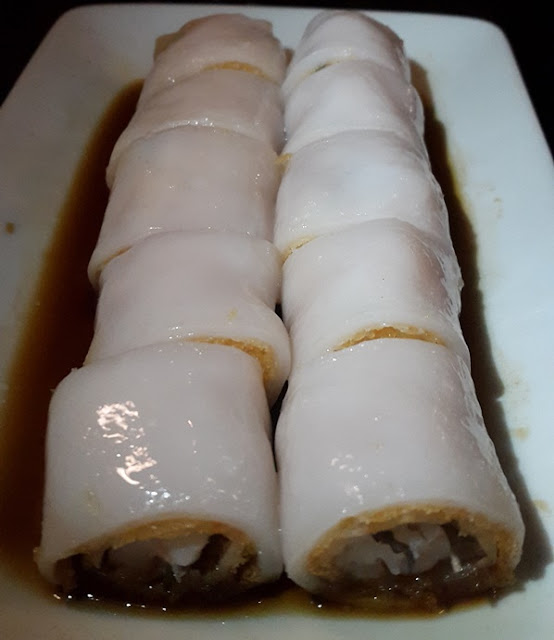 Crispy Prawn Dumplings were my favorite of the night. These rather simple looking rolls were packed with an amazing flavor. The rolls were made out of bean curd sheets which gave them the smooth velvety appearance. The flavor was savory with minced prawn filling most of the roll. It was slightly crunchy as one chewed past the bean curd. There was a creamy flavor to it as well. I think these rolls really pampered my taste buds.

Yauatcha is well known for its artistic desserts made in the patisserie below the restaurant. Though I was not able to sample all of these as tossing unguarded desserts in the midst of certain food bloggers is often akin to tossing a piece of meat in between a bunch of hungry wolves ha. 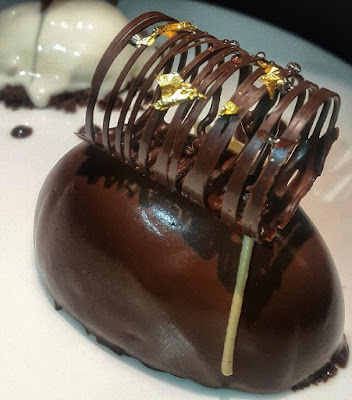 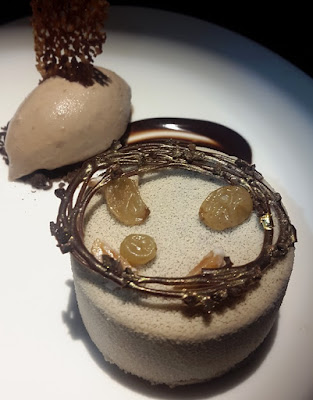 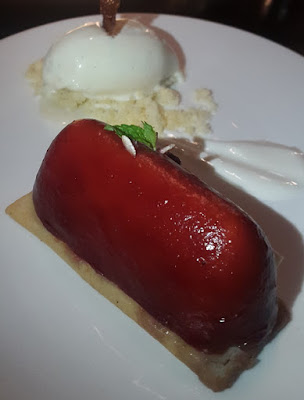 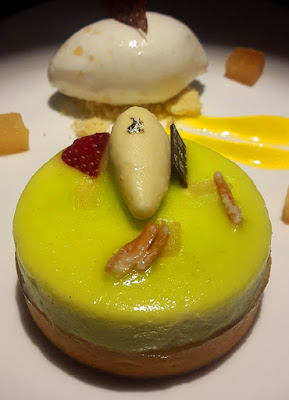 Pear and Almond Tart was a fruity end to the meal. This colorful dessert had pear and kiwi in the top layer while almond meal dominated the lower layer inside the crust. I do feel like coming to Yauatcha separately for the desserts someday.

The pricing at Yauatcha is definitely on the higher side though it does do good business which speaks in favor of the food and quality served here.

The new menu seemed to have more hits than misses for me. What impressed me the most was the fact that the chefs were rigorously trained to produce near exact versions of those produced by Traditional chefs in China. Do note that I am not using the terms "emulation" or "replica" here. Yauatcha is a little bit of China in India.

In a posh office district dominated by high quality niche eateries, Yauatcha does stand out high and ranks among the best, I would definitely visit the place again though not part of any group ha.


-I was invited to a bloggers event by the Restaurant's PR. My review however remains objective.-

Posted by Rishabh Mittal at 5:11 am