El Toro Cantina may sound Spanish due to its obvious naming and it does use the two words most Indians associate with Spanish. Cantina however is a term rarely heard of in India, I first heard of it in the 90s while watching Star Wars -  a New Hope. A Cantina in Mexico or Spain usually serves drinks and small plates or Tapas. Literally, it could mean an equivalent of a canteen or a mess. However El Toro Cantina is a mix of a cantina, a sophisticated cafe and a fine dine. 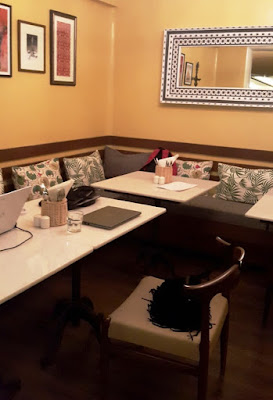 It had a pleasant ambiance which felt very European in decor. Thankfully, it hadn't used any annoying stereotyped cultural props like most foreign cuisine restaurants in India now days do. I arrived here on a rainy afternoon for a late lunch. The place felt quite comfortable. The bar was radiant and looked straight out of a popular pub.

The food was very continental. It was a mix of Spanish, Italian, French and Portuguese. Do note that there is a difference between Spanish and Mexican food. Spanish food is made out of native and European influences while Mexican food is a mix of Spanish, South American and Texan influences. The Mediterranean flavors suit Indian palates very well and as such I can see El Toro becoming quite popular in the future.

Here is what I sampled. 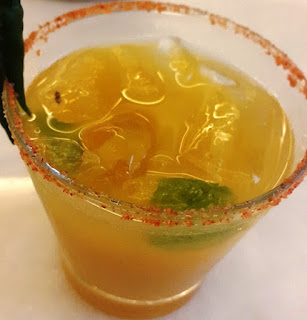 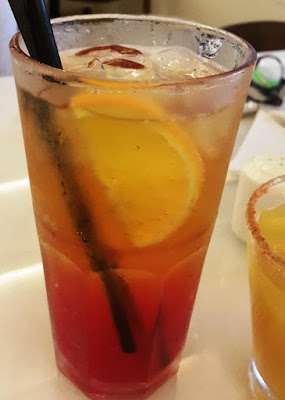 These colorful citrusy cocktails were ideal for a summer afternoon which was still hot despite the rain. The colors of these cocktails blended well with the vibrant ambiance of the Bar. 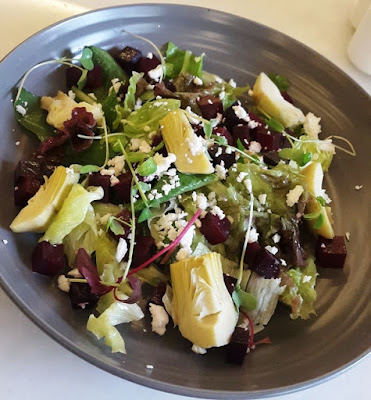 Beetroot Carpaccio was an Italian appetizer that worked well as a vegetarian version of the meat based Carpaccio. It added green to the red and white themes commonly associated with Carpaccio. The Beet was marinated in liquor and was the hero of the dish. Its addicting flavor made me gobble down this salad in no time. Crumbled Feta provided a salty depth to the sweet, tangy and candied beets. 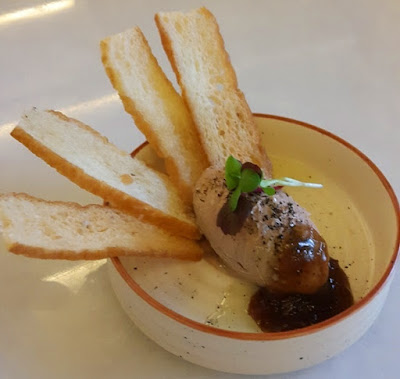 Chicken Liver Pate. I will admit that Liver is one part of any meat that I vehemently avoid. However the pate here was a balance of both bitter and savory. The Pear Jam drizzle and the Melba toast helped augment the flavor profile. I could eat a substantial portion of it but I'd still stick to avoiding liver in the future. 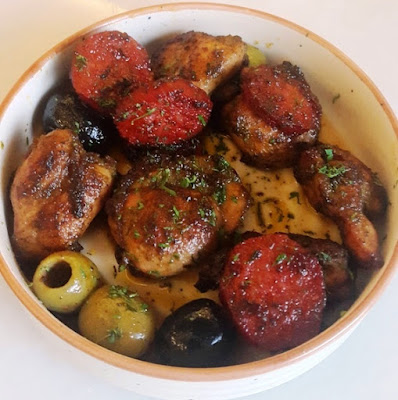 Pollo, aceitunas y chorizo was a mix of spice rubbed chicken chunks tossed in Chorizo oil and mixed with Spanish Chorizo and Olives. This was quite a delicious snack. The flavor seduced my taste buds to no end. I love Chorizo and it was a nice change from the Goan chorizo that I am so used to. The flavor was subtle, less spicy and quite savory. 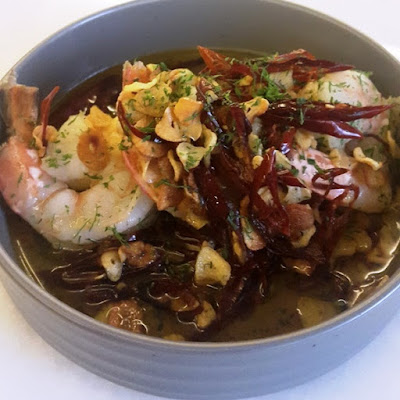 Gambas al Ajillo is a famous prawn dish from the region of Catalonia. Made with a mixture of native Catalonian, Spanish mainstream and Italian influences - this dish was a bowlful of flavor. Its garlicky and subtly spicy flavor will pamper Indian palates quite a lot. The dish went well with the drinks, although it could use a bit of improvement on the presentation part. 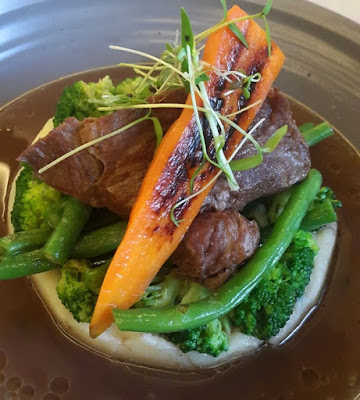 Braised Lamb. This delicious slow cooked lamb looked like a mountain of meat surrounded by a forest of vegetables sitting on top of a potato mash island surrounded by a sea of black pepper gravy. Maybe that's my travel seeking self drifting away while writing this though ha. 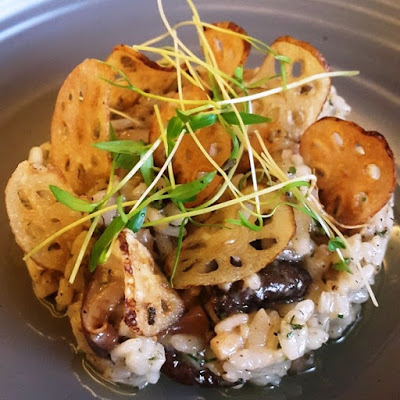 Risotto of the day. As the name suggests, this one changes everyday. The Arborio was topped with a ton of fried lotus stalks. The dish was delicious though I have had better. 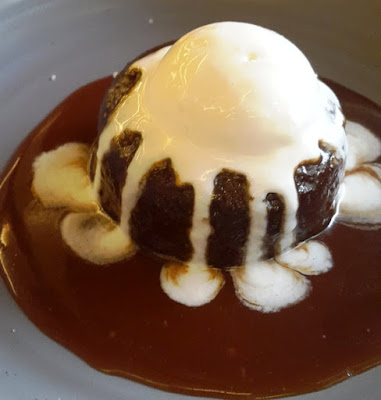 Sticky Toffee Pudding. Pretty sure this was the puddin' Harley Quinn keeps jabbering about. This has to be one of the best Sticky Toffee Puddings that I have had anywhere and I'd say this was the best that I have had in Mumbai. The Toffee sauce was deliciously rich and the cake was soft and fresh. The Ice cream was of premium quality. All elements worked well over here. A sweet alchemy well orchestrated.

The service was good and the staff knew the menu well. Despite the place being new, the servers made it feel that they have been running the show for years.

The pricing is slightly on the higher side but if you have made it this far into reading this article, I am sure that you can tell that the grub was well worth the moolah.

To wrap this up, El Toro Cantina delivers well with its Pan European food, ambiance, drinks and service. But can it sustain itself in an area infamous for open and shut eateries? Time will tell but from my side I'd say it was a rainy afternoon well spent.


-I was invited by the Restaurant to sample the menu. My review however is objective.-

Posted by Rishabh Mittal at 5:09 am