Sometimes, me crew just wants to take a break from adventure and have a party at a tavern. Our map had a new mark today. A tavern that was largely unknown. The map was not fully drawn on this part as well. Never to give up on the unknown is the code of this sailor and I steered my ship through uncharted waters. Finally, I arrived at me destination and a party awaited us. Music, Grog and grub - what else could a sailor ask for? 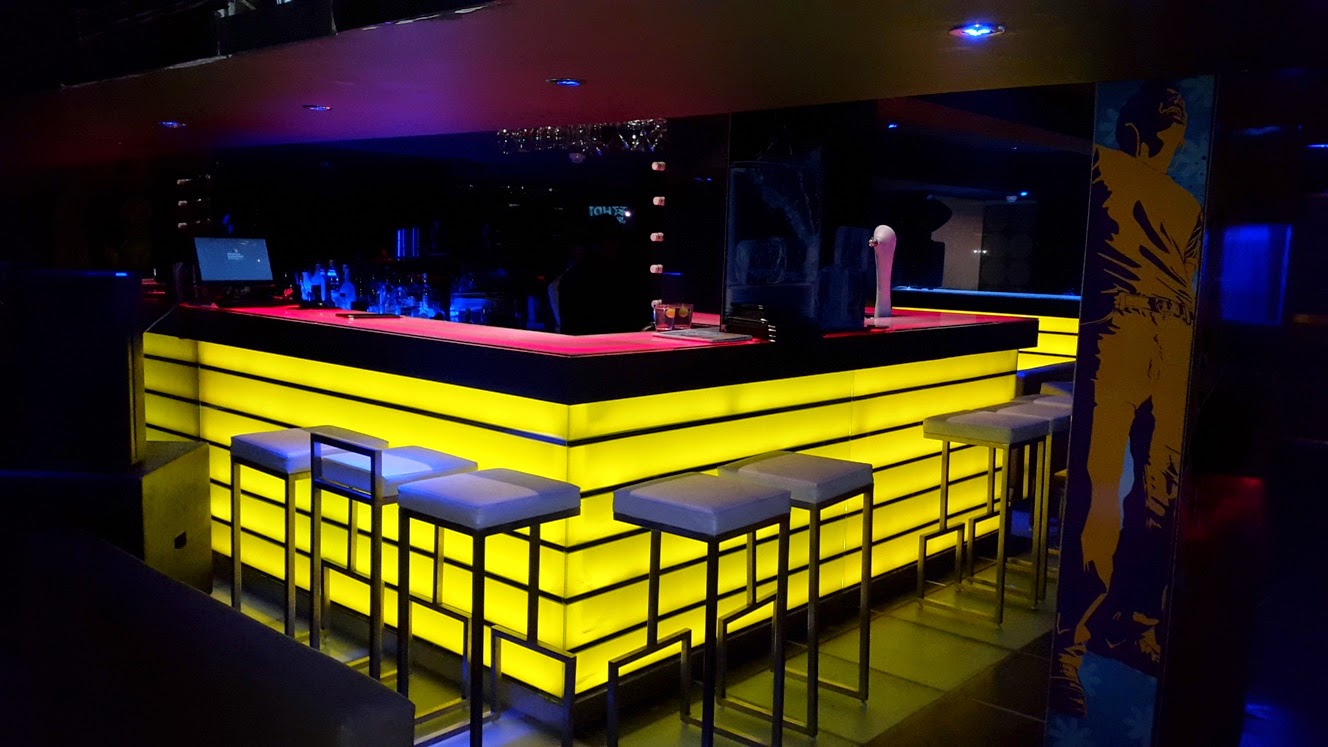 4Play is an obvious reference. When you work the whole week, it is only fair to play a bit or lets say 4Play a bit. I visited 4Play as a part of a meet up organized by Food Bloggers Association of India(FBAI). The day selected was a Friday. The time was late evening. Yep, it was prime time. Time to grog down my tiring week.

4Play is located inside New Castle Hotel which is at a walking distance from Khar Railway station. And it lies on Linking road so its easily accessible by bus or car. However, the building itself feels very residential and one cannot believe how narrow the entry to 4Play is. It feels like a hole in the wall kind of an establishment or perhaps a Narnia like world whose entrance is a small cupboard. 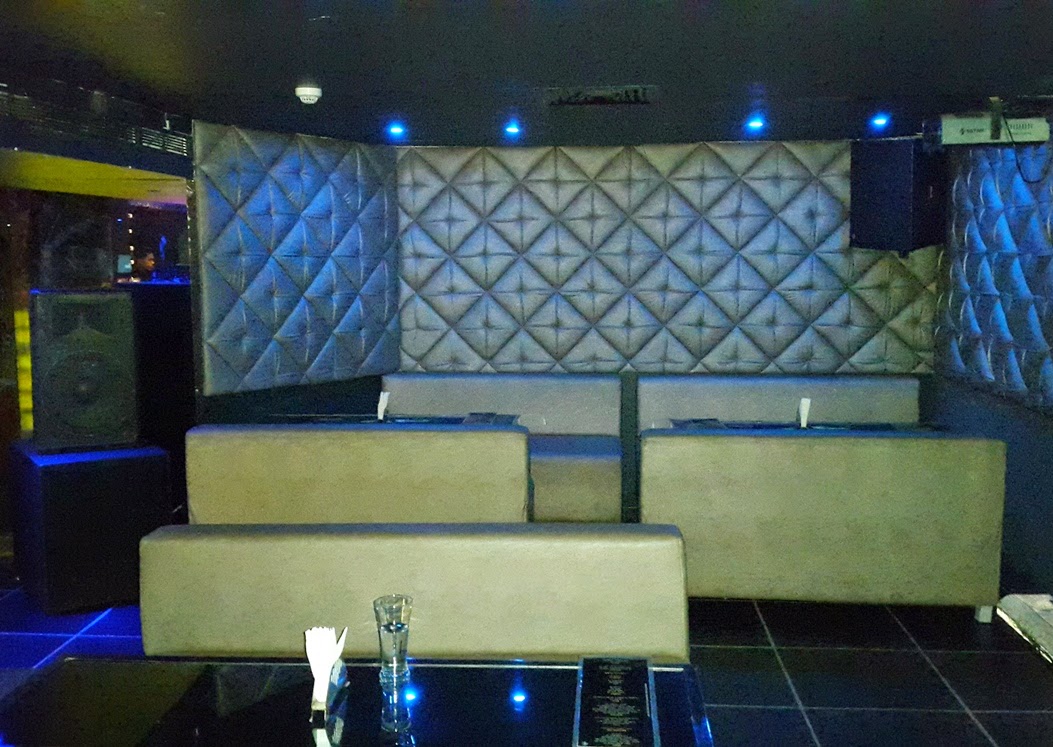 However once inside, a nice lounge awaits you. The atmosphere is electric and the decor is decent. There are a few anomalies with the decor, however the establishment is still new and the management assures us that they will be working on that. Its has a typical dim lit appearance and is great for dates , brodowns or just getting away from the stressful week. To be honest I prefer blue lights over green or orange for lounges. So I found the ambiance quite cool. Lest I forget, there is also a large projector screen to see your favorite sports. Great place to enjoy a Gayle storm or the English Premier League. 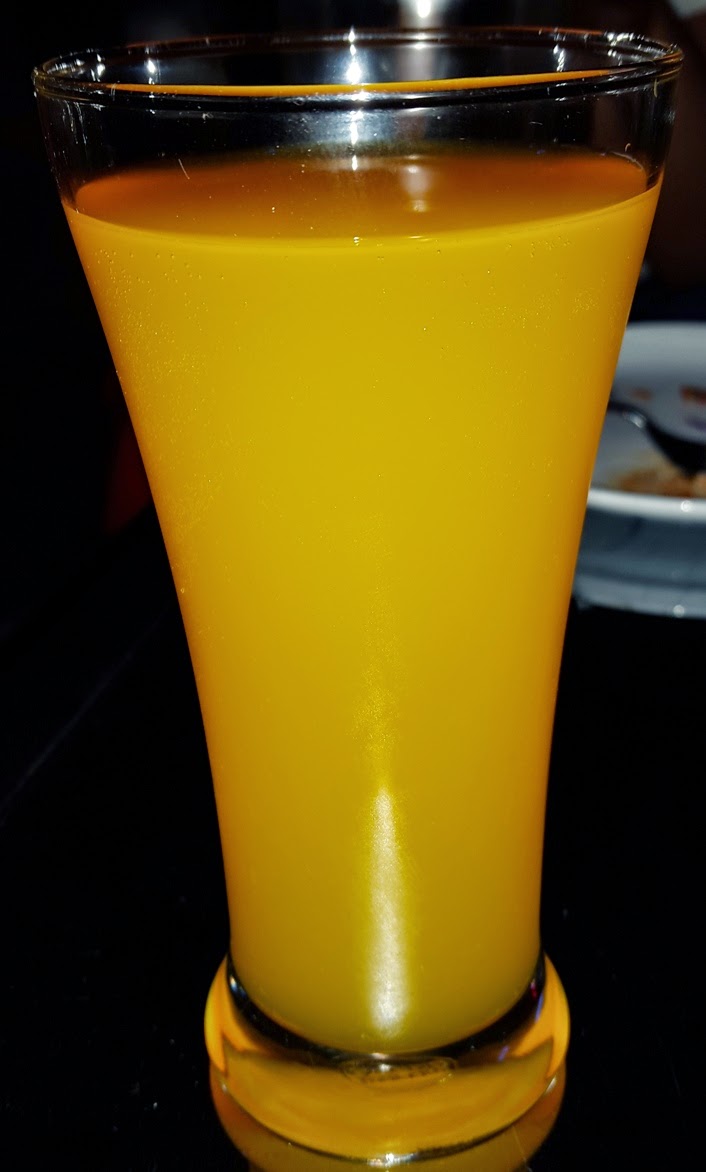 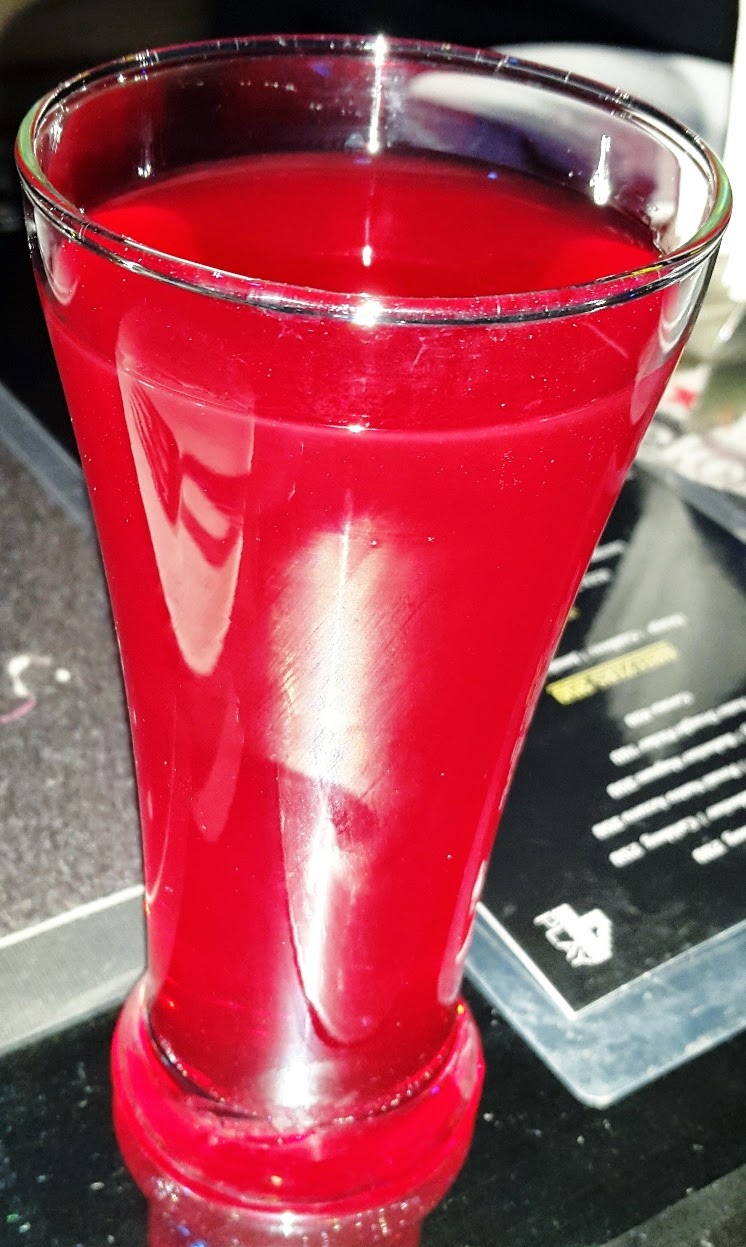 As fellow connoisseurs poured in one by one, the twilight sojourn began. Preferring something mild, I chose a Bacardi Breezer alcopop. The selection for drinks is quite good as expected. Those with a ravenous appetite for grog can get some of the best drinks money can buy and the teetotaler kind can sip on some mocktails.

As time progressed, we were served with an assortment of some fine finger food. 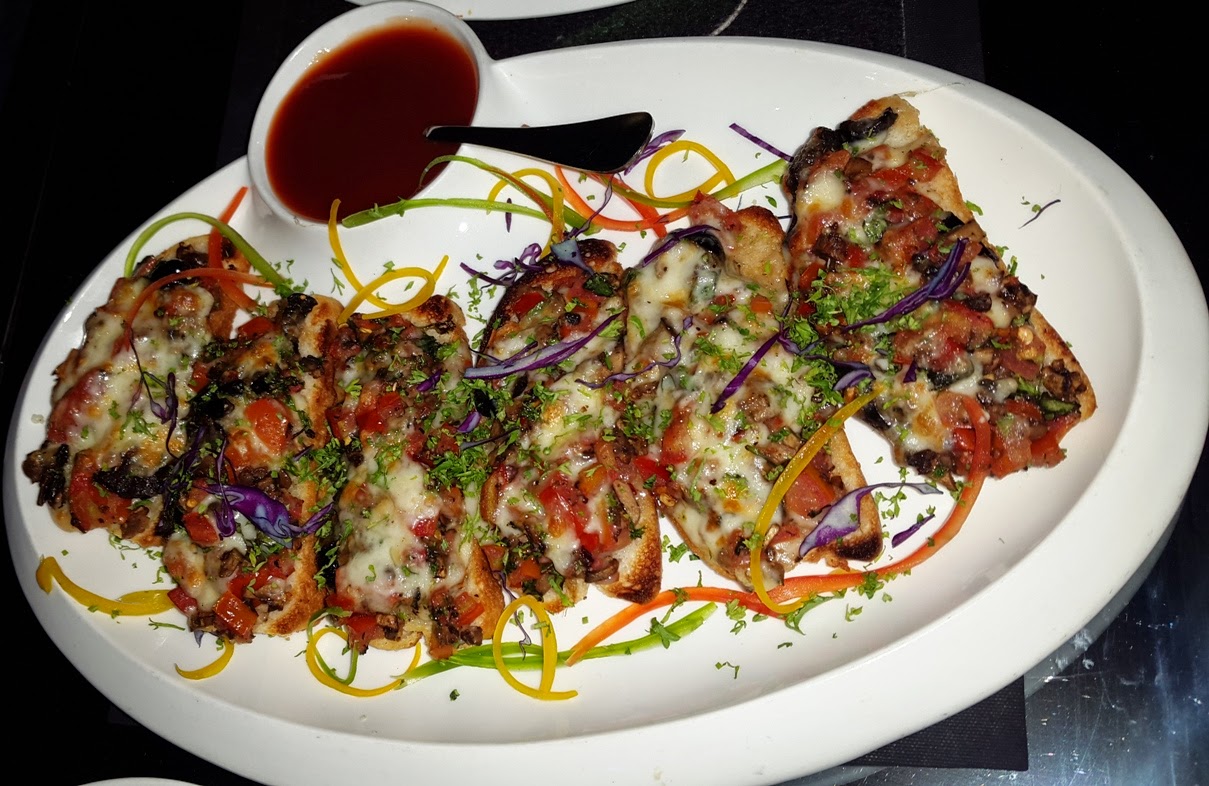 Veg Bruschetta is a classical antipasto dish that is found in most fine food installations. 4Play's version was definitely better than the standard, tomato-basil-olive oil combo. The cheese added to the preparation.The small Bruschetta toasties were definitely a good way to flag off the evening. The presentation was great and it appeared as colorful as multicolored confetti sprayed on a Holi crowd.

Captain : It looks too beautiful to be eaten.

Crewmate : But it must be eaten, You once said that food is meant to be eaten to complete...

Captain : Shush lad, don't ya remind me of my own words. 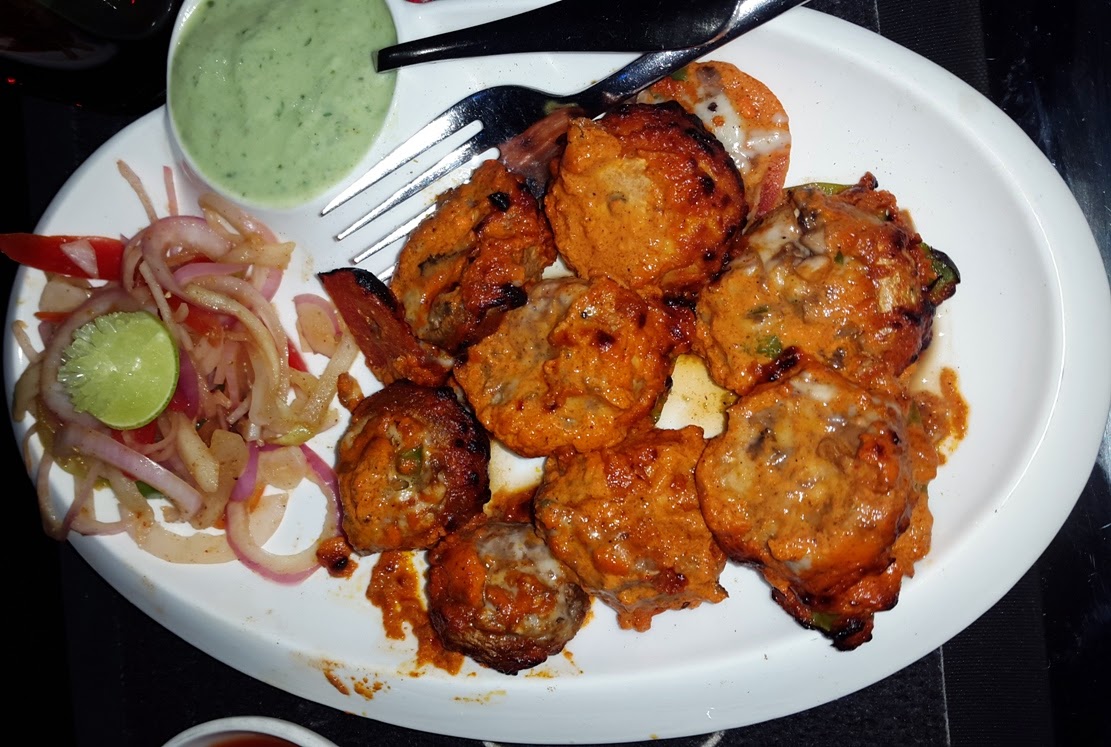 Tandoori Mushrooms - Its rare to come across this item and it was tasty fun. Tangy and savory with marinated mushrooms which appeared to be wrapped in a bit of cornflour. They were tasty although the capsicum slice in the base of each piece felt a bit of a mismatch. This item was one of the favored dishes of the meet. My friend on the other side of the table seemed to enjoy these thoroughly.

Captain : Do ya think these Mushrooms grow in the wild? 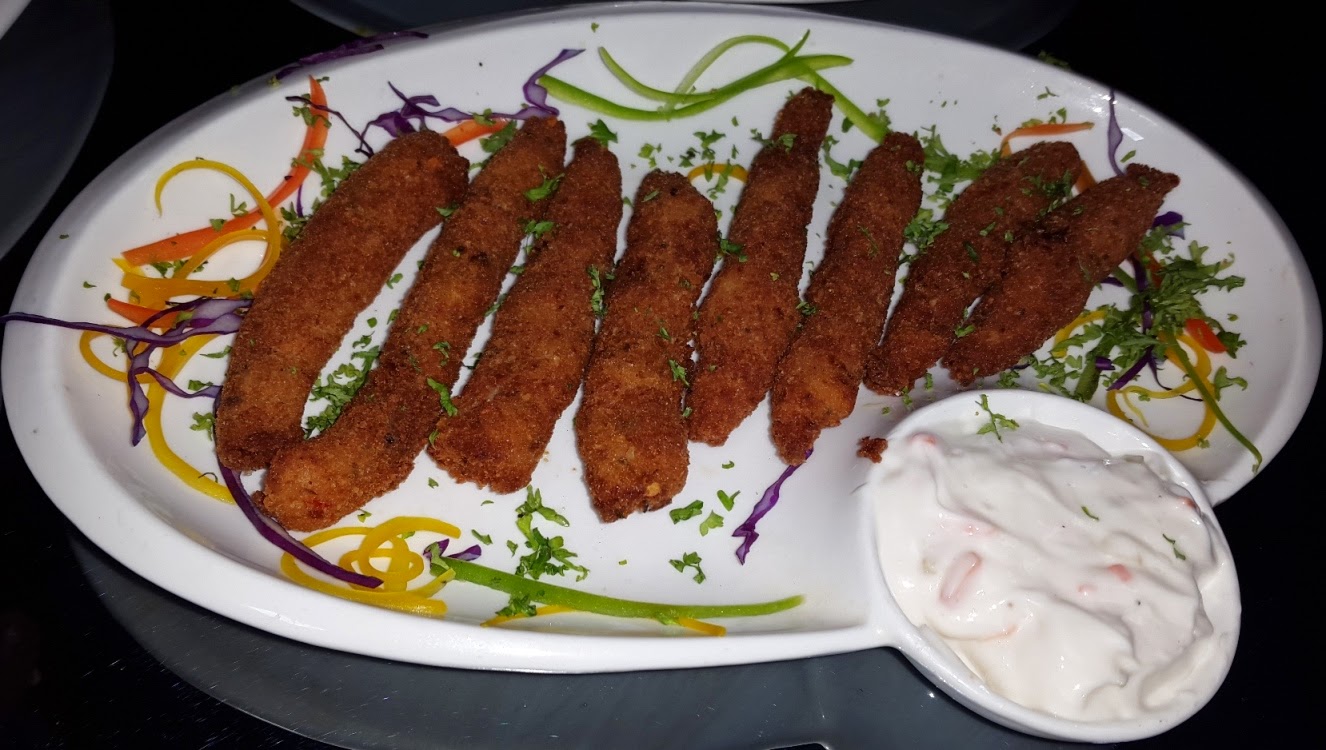 Fish Fingers was one of my two favorite dishes of the day. Wrapped with crumbs and coated with a savory-spicy-tangy mixture, these were an addictive part of the meal. Each bite revealed a soft gooey and white Basa filling inside. For a supposedly deep fried item, 4Play's Fish Fingers was barely oily and full of taste. I found myself eating several fingers. I felt that these were some of the best Fish Fingers I have ever had. The creamy dip went great with each bite. And as visible from the picture, the plating was beautiful.

Captain : Fish Fingers are me favorite.

Crewmate : I understand Cappy, but I would like to try some too.

Captain : Sure lad, Each finger for one day of desk sweeping duty. 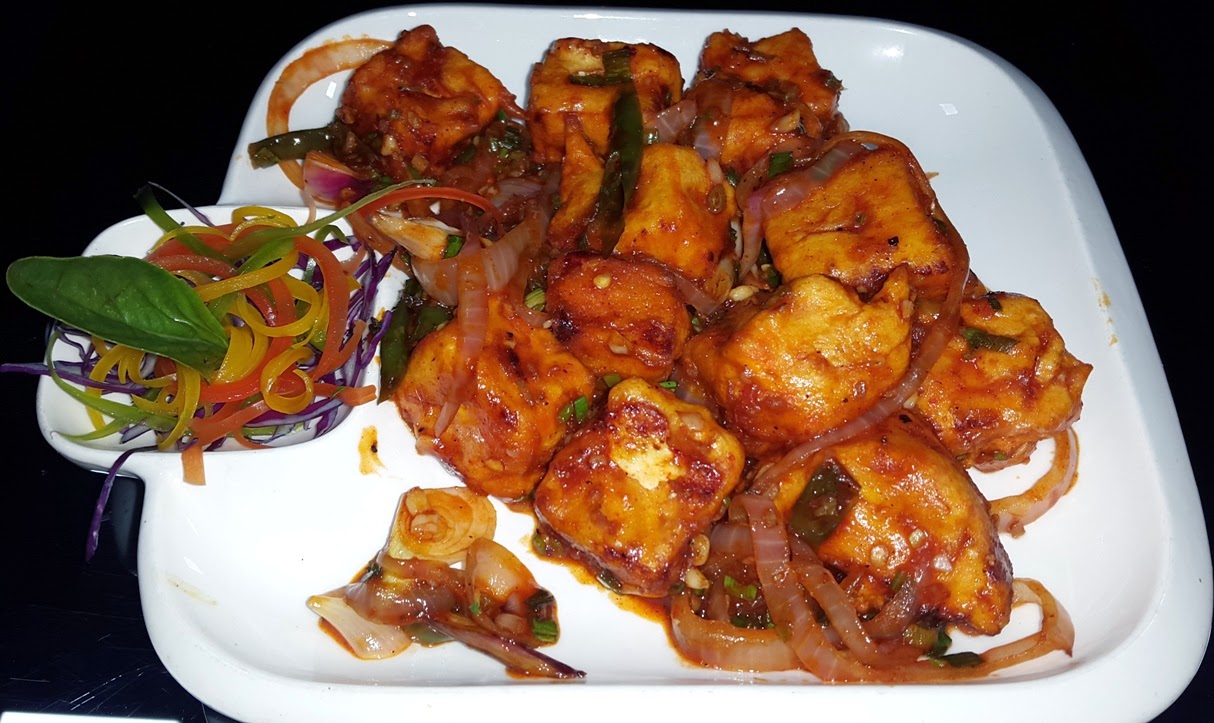 Mongolian Paneer - Again a rare preparation. Was great on the plating part but a bit messy on the eating part. It was oily and lacked the zing that it was expected to have.Seemed to lack chilli sauce as the sauce present on it was quite sparse in density. Somehow the flavor didn't seemed to extend to the Paneer. Methinks this one needs some fine tuning. 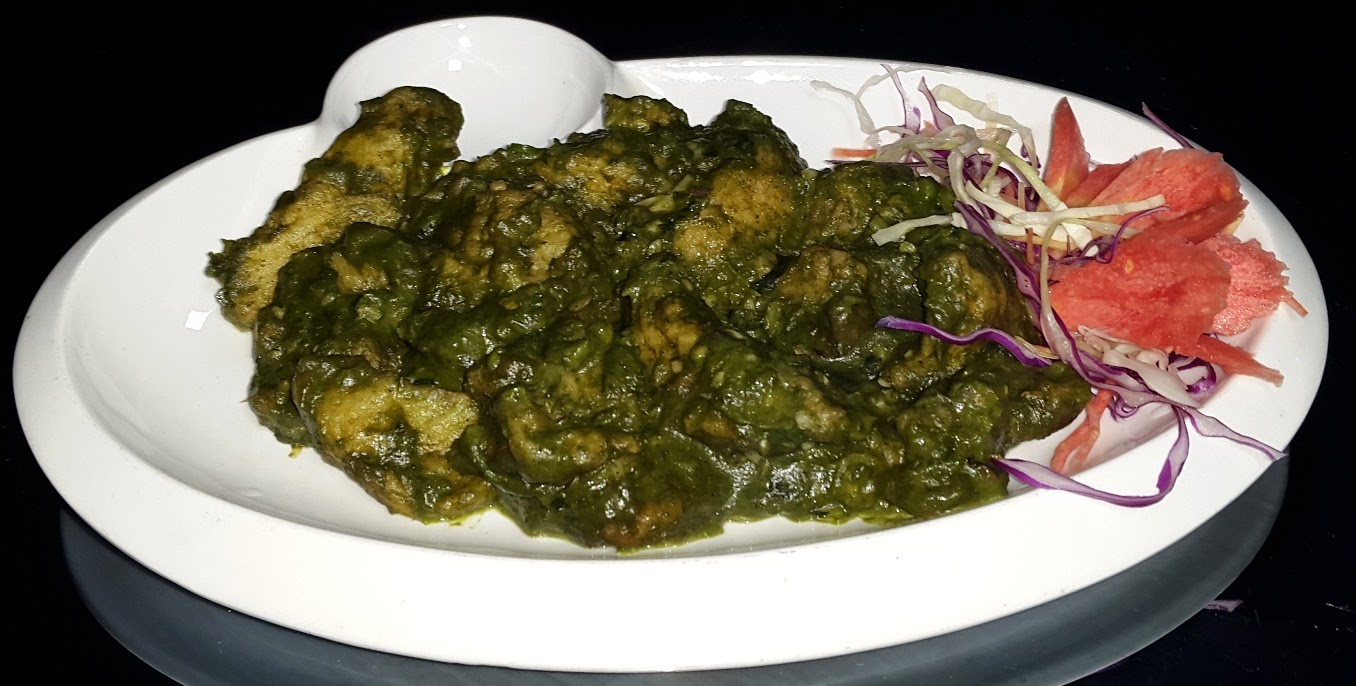 Fish Pattaya was supposedly a new preparation for me. I do not recall having this anywhere before and I need to make that clear to explain my bias. This was an ultra soft melt in your mouth Basa cooked with a spinachy concoction. It suffered from the problems of being far too messy and greasy. The green concoction could not add much to the flavor and it just tasted like gooey plain Basa. 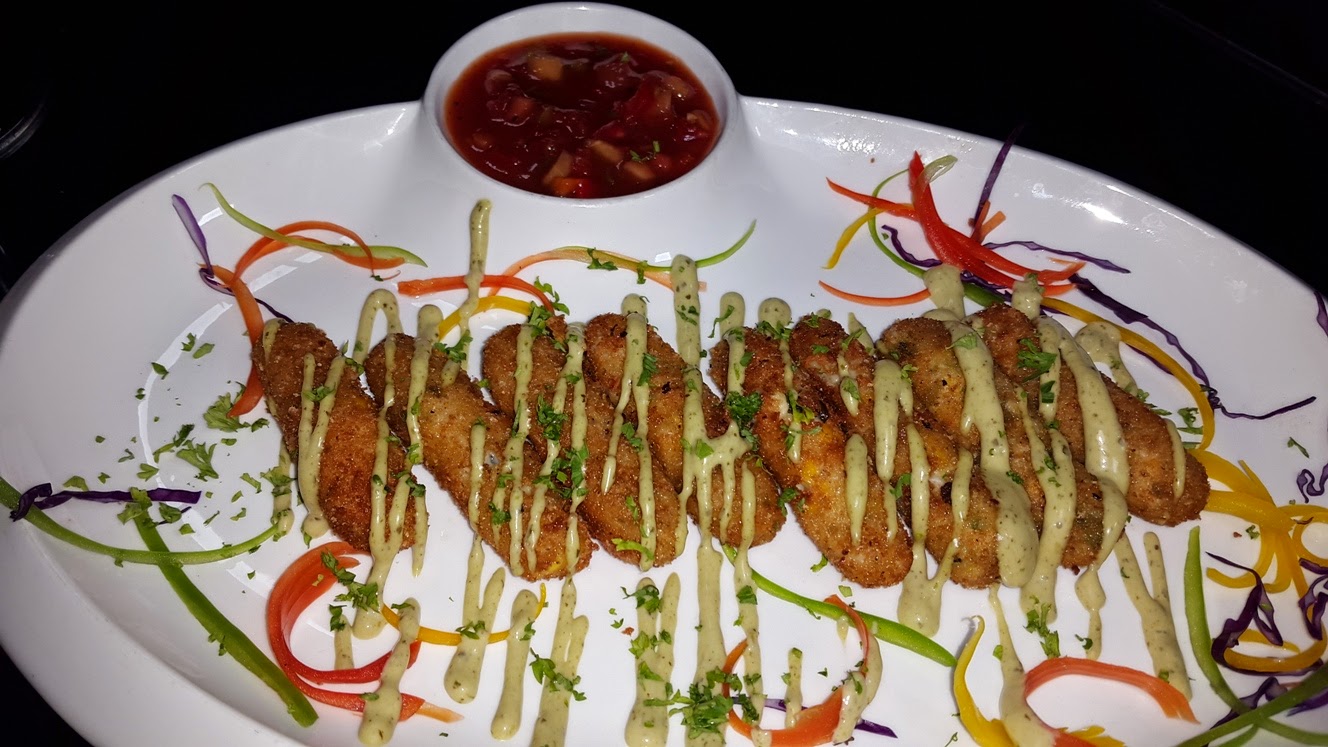 Corn Cheese Croquets were without a doubt, the best item of the evening. From the start itself, the item impressed me. The plating was excellent, it almost had an artistic feel to it. The crust was barely oily, soft, crispy and cooked to perfection. The aroma played games with my olfactory senses. And as I took a full bite, the soft river of cheese and corn overwhelmed my gustatory senses. I had a glimpse of food heaven. The savory crust and the salty insides were a great combination. The dip added to the experience. This was definitely the best Corn Cheese Croquet that I have ever had so far. And do remember, that this is coming for a vegetarian item from a carnivore.

Captain : Never have I eaten such toothsome croquets.

Crewmate : Its not even meat Cappy. 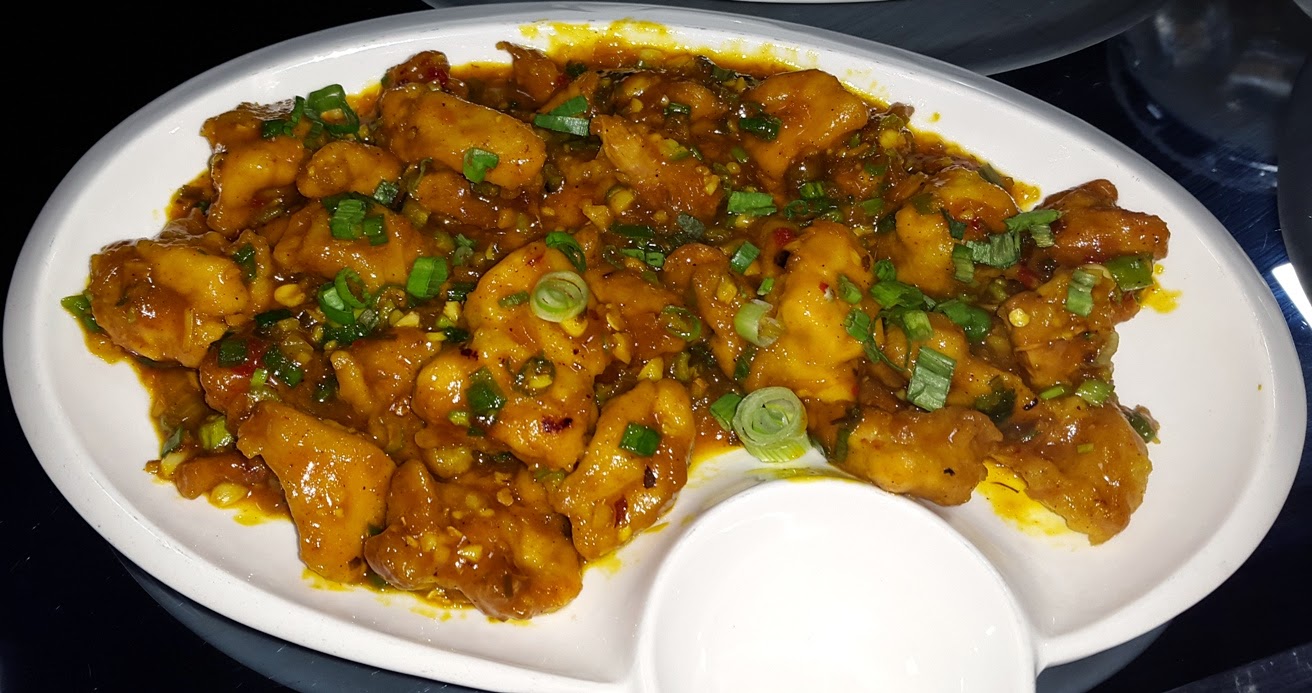 Chicken Peri Peri had a glitchy start for me. It felt greasy and low on taste at the beginning. However, I found that it was an issue of uneven plating. The chicken on one side had too much liquid while on the other end it was a bit dry. The chicken itself tasted great but somehow the liquid was causing an issue. I promptly stirred my serving a bit and the taste then became acceptable. It was soft chicken cooked with a garlicky sauce and a hint of Peri Peri. It was definitely not one of 4Play's best cards but was a satisfactory item. 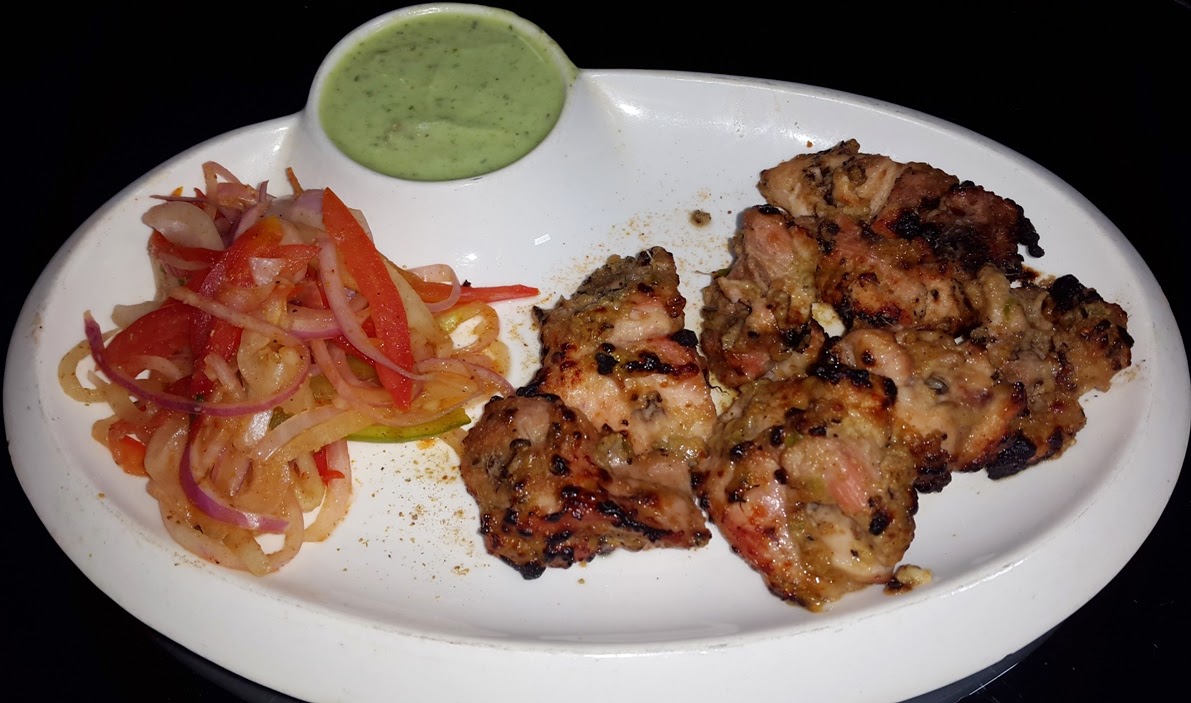 Named Chicken Kali Miri, this preparation seemed like the classical Chicken Kaali Mirch Kebab to me. This one is an old favorite of mine and 4play's version wasn't bad either. Soft marinated chicken with the enticing flavor of pepper. It had a nice aroma and definitely had the ability to make anybody hungry. It was well cooked with no burnt edges and uniform texture.

Captain: Kali Miri? That sounds like Calamari. Its confusing.

Crewmate : These are Kali Mirch kebabs.

Captain : I agree lad so why in the seven seas would someone name it like that.

With some chitchat over food, our evening came to a close. Full of player food, I was ready to head home.

The service is decent. The staff is both professional and well experienced. The test of a good lounge service lies in the server's knowledge of serving drinks. Our server made no mistakes while serving different drinks to different members of our rather large group.

4Play has a pricing that is on par with similar Lounge and Restopub restaurants. The wine options feel cheaper than most other restaurants that I have been to.

"Enough celebration and enough chatter lads. The winds are right and we must sail under the moonlight. Until next time."

-I was invited to a preview meal as part of a Food Bloggers Association of India(FBAI) meet up-
Posted by Rishabh Mittal at 3:49 pm