I opened me map and saw the marked spot again. It read "Hoppipola". It made no sense to me but the fact that the word Tavern was marked along with it was enough to pique me interest. We were sailing by the coast on familiar seas and making a list of places. This coast was full of restaurants that tis' Captain would like to have future grub at.

We were at the right co ordinates when suddenly me lookout made a loud sound...of his snoring, the daft lad had fallen sleep. Aghast, I took out me looking glass and studied the coast. As they say, never send a lad to do a man's job. I found our destination inside one of the lanes on the coast. I smiled and said, "Lower the Dinghy mates. Grog ahoy."

We all loved jumping into rainy puddles as children but as we grew older, we became refined and matured forgetting the little pleasures of yesteryears. Hoppipola apparently means "jumping in the puddle" in Icelandic and perhaps strives to emulate that very experience that we have forgotten. Though not by literally jumping into puddles. Its brought to you by the same people behind Mainland China and Oh Calcutta, so it does bring with it an air of experience.

My visit was part of an event which introduced me to Hoppipola's new cocktail menu. So it was going to be a very boozy afternoon. Being more of a grubber and less of a grogger is always a tricky situation for me but I am still glad that I attended this event. 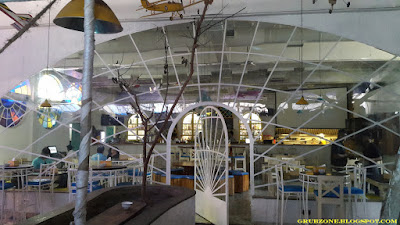 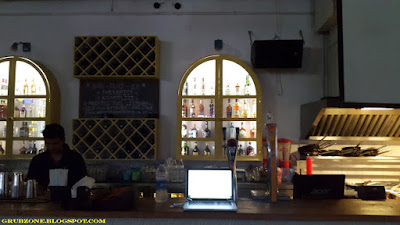 The ambiance felt very much like a marriage of an airport lounge and a cafe with a little bit of fine dine thrown in. While the lighting was dim and the place was completely indoor, the large vents made the place appear like an Al-fresco. It was a strange and an intriguing illusion. So that gave the place an appearance of both an indoor dining and Al - Fresco.

I soon met other food bloggers and Hoppipola's Chief Drinking Officer Sandeep who is a veteran mixologist with seven years of experience under his belt. That is much more than the period most Mainstream Karate schools take to give a pupil a black belt.

Whiskey Sour - We were given a warm up before we tried the new cocktail menu. And what better warm up than a classic cocktail like Whiskey sour. Potent, sour, tangy and sweet at the same time- This got my mood up. The egg white in it gave it a smooth texture making this literally the cheesecake of cocktail drinks. 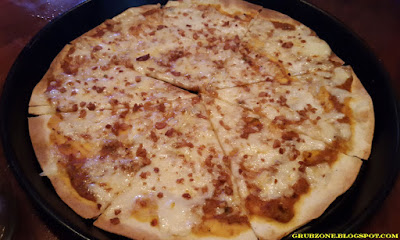 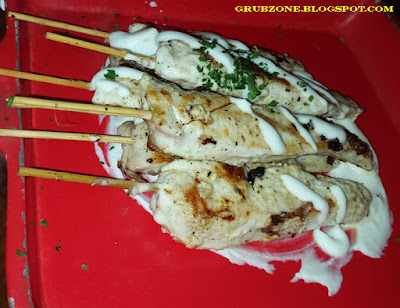 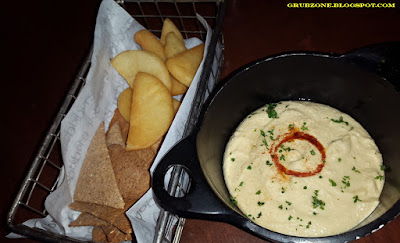 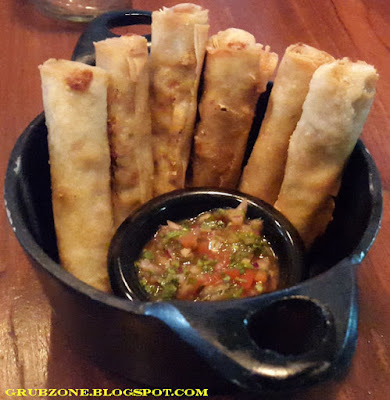 Margeritha pizza, Chicken Skewers, Bread(Pita and Ragi bread) with hummus and Smoking Carlos were served along with the drinks as bar nibbles. Decent stuff and the skewers tasted really nice with the whiskey and vodka base cocktails.

Captain : Whiskey and Grub. I am already lovin' this place lad.

Crewmate : I agree Captain but why are you keeping all the grub near yourself? 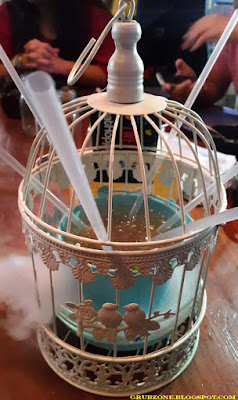 Birdcage lived up to its name literally. Served in an artsy cage with dry ice surrounding the mixture to keep it cool and protruding straws, this had one hell of a presentation. The base was white rum with additions of orange liqueur, pineapple, Kiwi, hazelnuts and pomegranate. It was a not a very strong drink and had a lot of sweet and sour to it. I felt that the flavor of the Cointreau dominated the drink. Think of it as an all grown up version of orange juices. 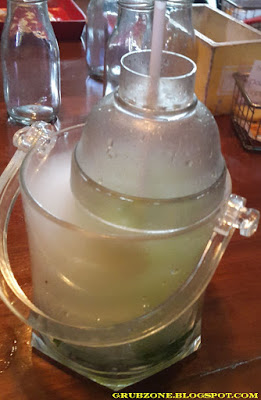 Auckland Ice Freeze was my favorite drink of the event. This was made with White Rum, Tequila, Vodka and hints of Triple sec. The kiwi was the power ingredient in this one and the cocktail tasted much like a Kiwi flavored liqueur. It had an addicting and mystifying flavor unlike anything I have ever drank before. I am told that the base recipe is based off Long island Ice tea but I don't really see the resemblance. Despite not having the best presentation, this was an amazing drink. If I were to go to Hoppipola again then this would, without a doubt be my drink of choice.

Captain : This brew has all me favorite things in it.

Captain : I loved the Rum and Vodka.

Captain : Wait you didn't mention Rum? WHAT KIND OF SAILOR DOES NOT LIKE RUM?

IQ(Intelligence Quotient) - Imagine all those bulbs that appear as a metaphor for ideas, now imagine if they contained a drink that one could sip on. Ah that's a novel idea. I was thinking of a drink that would be made of my favorite vodka and maybe some sweet stuff and ding - I got this over my head. Before it dropped and made a mess all over me, I promptly grabbed it and took a sip. Vodka has the odd ability to let any flavor dominate the drink but yet maintain its potency. This was a sweet cocktail(In both smell and taste) with additions of cranberry, passion fruit and watermelon. Having it in a bulb shaped glass was fun too. 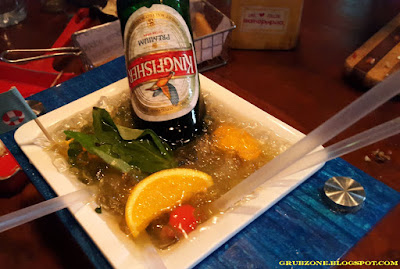 The Hoppi Bath Tub was visibly pleasing and quite a novelty. Made of White Rum, Beer, basil and burnt orange - this had a base flavor of rum with aftertastes of beer. The orange additions subtly added a bubbly citric twist to the concoction. I am not a big fan of anything with beer in it but the mixer really blended the other ingredients well into the cocktail, and I found myself taking more than just a few sips. Now having a life size bathtub with this concoction would be quite an affair, but thats a story for another day. 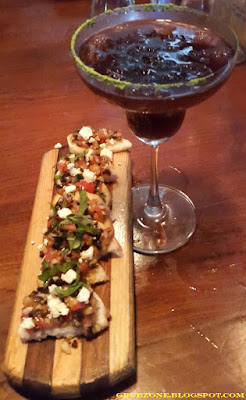 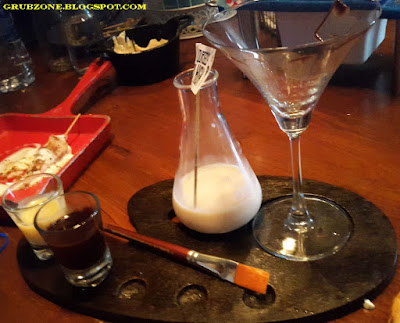 Da Vincitini had an interesting presentation. You know somethings up when your drink is served up in a palette. Made of Vodka Expresso and Baileys, this one can be enjoyed with dark, white or caramel chocolate. While the drink smelled sweet and the presentation was amazing, I was not quite fond of the flavor.

I felt that there were too many voices talking at the same time in terms of flavor and they seemed to cancel each other out. But that could be due to the fact the drink served to me was mixed with the wrong chocolate. For example, I would have gone with White chocolate and skipped dark and caramel. 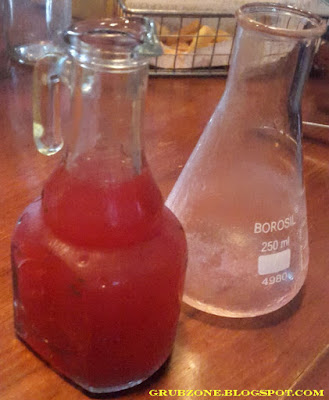 Desi Martini was made of premium Swedish Vodka(Absolut brand which claims to be distilled an infinite number of times), pomegranate, coriander, chilli and a spice mix. The drink wasn't very strong but had an interesting flavor. The after taste positively resembled Bhelpuri. I'd say the desi was successfully fused with the martini. Not just Desiness but this infuses the street food spirit of Mumbai into the martini as well. This makes a good drink to try for cocktail lovers and curious fellas like me. 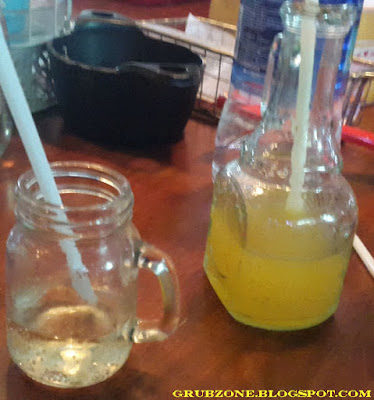 Captain : Hmm strange. This drink doesn't remind me of Jenna, Maria or even Sunny.

Crewmate : I don't think the drink is supposed to do that.

Captain : Nonsense. The only reason I drank this was because I thought it would show me previously unseen images of those fine lasses.

Crewmate : And Davey Jones mops the deck for us, amirite?

This wrapped the cocktail tasting session up and got me a little high...on happiness, just like jumping in puddles.

The pricing seems apt for the experience and quality. Though you'd probably like to be careful which poison to go for.

The service is amazing going by the visual delights served to me during the event. It is an art to make an artistic cocktail and another to serve it, without disturbing the work.

I am not the drinking type of bloke but Hoppipola does present a compelling scenario. Sandeep has come up with some interesting concoctions and these are definitely worth a try. The restaurant also offers a diverse collection of wines and other pure drinks if you are not up for a cocktail.

"Enough Rum and Vodka to keep us going for the week lads. Yer sailor engines should be up for some high adventure now."

-I was invited by Food Bloggers Association of India to sample the new cocktails as part of a bloggers event.-

Posted by Rishabh Mittal at 2:09 am