The mountains adorned the far side of the horizon as we sailed towards our next destination. The island of six mountains and four rivers lied ahead of us. Though grapevine suggested that its not four rivers but rather four roads. I wondered if I would find the blue compass on this island. That could possibly not be true. The most coveted artifact in human history cannot be found so easily after all. A part of me wanted the compass on the next island while another yearned for greater adventures.

Radio : This is the Navy, state your business for visiting this island. 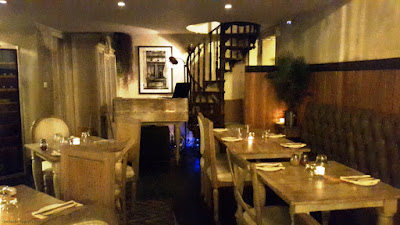 Farmer and Sons (Hereby known as F&S) takes the place of the erstwhile Nico Bar. The management is still the same but the re branding exercise seems largely pointed to right the wrongs of its predecessor. While the place may not seem as popular as Kapoor & Sons, this Farmer has his heart in the right place.

The eatery feels like a mix of a small bistro and a bar. The narrow bar comes before the slightly wider dining area. The entrance can thus get a bit of a bottleneck if the bar gets too crowded. The bar resembles classy taverns found in West European destinations. The Golden light also felt comforting and calming, though it could be a little troublesome for food photography.

I was part of a Blogger/influencer bunch invited by Food Blogger's association of India. The bunch gladly occupied most of the bar area creating the aforementioned bottleneck. The first course of course(ha) were the drinks. The barkeep Sylvester explained the house specialties like the Drunken Dragon Milk or Mumbai Ice tea for example. His explanation was accompanied by busy food paparazzi gulping the cocktails with their cameras. 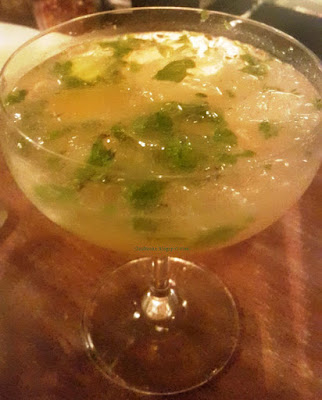 Rhubarb and Rose Mojito - After patiently waiting for the battle field dust to settle, I managed to get Sylvester to whip me one of these. The mixture contained Rhubarb compote, Rose Syrup, White Rum, mint and lime. It was a sweet take on the classical Mojito. It was quite an interesting flavor. This was pleasantly sweet(as opposed to traditionally sweet sour Mojitos) and yet was still a Mojito.

Navigator : Rum with Rhubarb? That is quite unheard of. Could this be our clue?

Captain : Unheard to you perhaps. Stop looking into your drink for clues. 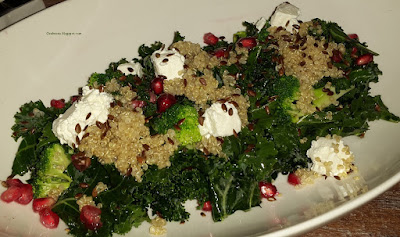 Salads make an odd course for a dinner but that is easily forgiven with F&S's stellar salads. This little forest in a bowl was made out of Quinoa, Kale and Broccoli. It was dusted with flax seeds, pomegranate and feta. A bit of Honey mustard dressing added a sweet and tangy flavor to the otherwise leafy salad. It easily pleased my palate and I could heartily hog down spoonfuls of this. 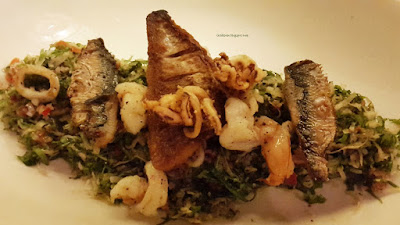 The Grilled sea food salad however was the one that took the cake.(That sounds like such an Oxymoron) This salad resembled a sunken island which had re-surfaced after many years. Containing Fish, calamari and prawns - this salad had quite a flavorful depth. It also had a rather generous amount of spade leaf which dominated the salad. The Tamarind Vinaigrette dressing added subtle sour undertones.

Chicken Doner sounds like a homage to Kebab Doner and sounded similar to Kebab Doughnut(I swear that I heard one of the servers say this). This pita pocket was full of a mixture made out of roasted chicken and Tzatziki. It also had pickled beetroot and house made fresh Aioli. One cannot help but sense the flavor resemblance to Shawarmas. The only problem that I saw with these pockets were their inherent ephemeral nature. They got over too fast. 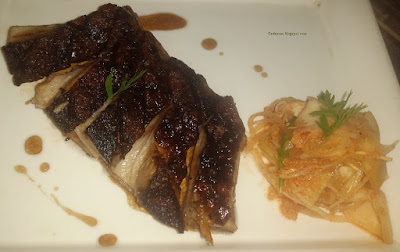 The Braised Pork Belly with Kimchi was quite pedestrian. The Pork belly had an acceptable flavor but it felt far more buttery/fatty than normal. The salty meaty flavor was overshadowed by the uneasy feeling of oiliness. The accompanied Kimchi was a damp squib in both visuals and flavors. It felt like cabbage leaves coated with some sauce. Have easily had better Kimchi than this. 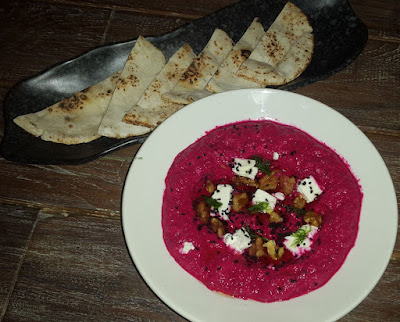 Beetroot Borani is a rarely found variant of the famous Irani yoghurt dip. This was sweet, slightly savory and all around fun. It also had a "just right" mixture of spices which enhanced its flavor to near perfection. The visuals, aroma and the taste all worked well with this one. Vegetarians would enjoy this dish. 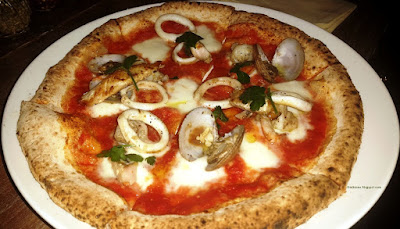 Sassoon Dock pizza was recommended by a few Zoman reviewers that I follow. Thus I made it a point to sample it while at F&S. True to its billing, it was a genuine Napolitano pizza. The rustic crust was a hall mark of a genuinely wood fired oven pizza. It had the aroma of Naples and was loaded with sea food. Calamari, fish, clams and fish - all cooked to perfection. The toppings felt very Mediterranean.

But just like how a bad singer can adversely affect the performance of a choir, the pizza sauce somehow felt excessively salty. Mistakes do happen and I am told that I may have drawn a bad straw with this one. Well, I guess that I may try this again on another day. 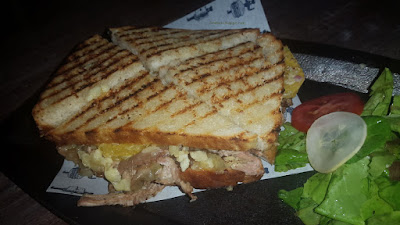 The Finger Lickin Duck was the star of the night as far as my opinion goes. This sandwich was made of whole duck, caramelized onions, Gruyere Cheese, poached orange segments and a bit of house made mustard sauce. The flavor was a mix of salty, slightly zesty, sweet and pungent flavors. The flavor captured me taste buds like a veteran cowboy rounding up cattle. There were many things happening with every bite. This sandwich was an experience in itself. Despite being a bit pricey, the experience felt well worth it.

Captain : Poseidon be upon us. This is quite juicy.

Captain : Why are you staring at the map?

Navigator : I think I saw something interesting. But I am not sure what it means.

Captain : Tell me when you figure it out and stop wasting precious dialog space mate. 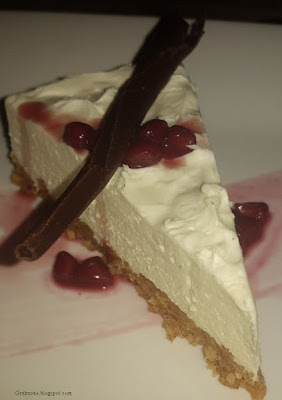 The White Chocolate cheesecake was sure a strange one. On visuals, it did not appear to be a traditional cheesecake but yet it was made of cream cheese and tasted like a genuine Philadelphia cheesecake. It also had a sweet and pleasant aroma. The chocolate scrolls and pomegranate coulis didn't seem to augment the flavor and were merely added for visuals which ironically could be improved.

The service was decent but greatly stressed under chaos since a ton of bloggers had dropped upon the small place. But I think that under the pressure, they acted quite professionally and decently. Though, they could be a little more informed on the names and ingredients.

The pricing is on the higher side of the scales. While its a welcome climb down from the steep pricing structure at its former avatar, the pricing still feels a bit high. Some items on the menu feel well worth the moolah though some feel a bit of scroogey on the portion sizes.

As I mentioned before, the farmer has got his heart in the right place but there is still a long journey that needs to be covered before he reaches his zenith. The food is good, the pricing can be adjusted and may give this place another shot in the future.

"
Captain : This place shows no sign of the next clue. Maybe we should ransack the place till we find it.

Navigator : That may not be needed Capitan. Have a look at the map.

Captain : What the...? Why did you draw these lines on it?

Navigator : Have a look closely. I took the four places that we have been to so far including this one. Then I drew lines between this place and the Daily Bar. And another line between Cafe Free India and Please Dont tell.

Captain : And what of it?

Navigator : These lines intersect at a certain point. That point is a small but popular isle in the blue yonder.

Captain : Sounds like co - incidence to me. You are over thinking it mate.

Navigator :  Perhaps I am but the intersection happens at the exact center of this tiny island. It cannot be co-incidence. I think that this restaurant's location itself was the clue.

Captain : Hmm, I don't like this theory but you do make it sound intriguing.
"


-I was part of an invited Food Blogger(FBAI) delegation, hence the meal was on the house . But my post is objective and neutral.-

Posted by Rishabh Mittal at 6:27 pm