We had sailed to a rather strange area in the sea. The map showed no land but yet there was a small island with a village over here. It wasn't just this ancient map but all other maps had nothing here. Bizarre! A small red rectangle and a number were scribbled on the supposed spot. I wondered what it meant. Was it some riddle or a joke the map maker played on us? One of me mates then pointed at a red colored phone booth and mentioned that those kinds of booths had not been seen for decades.

Red Rectangles, Red booth! Could this be our clue? Lets find out if its true.
I went inside the booth which was facing a wall. I picked up the phone and dialed in the number scribbled on the map. Suddenly a wall moved and a secret tavern was revealed behind it. What in the sweet name of sweet Calypso just happened? Moreover, how does an ancient map point to a telephone booth which is a modern invention? The Blue compass mystery deepens.

Please Don't tell pays homage to the 1920s when the Prohibition act banned alcohol in the United States. Grog could only be obtained in hidden breweries and pubs which operated beyond the Government's knowledge. Getting caught meant jail and alcohol lovers had to go through great risks for their favorite brews. Ah the adventure of being a rebel. 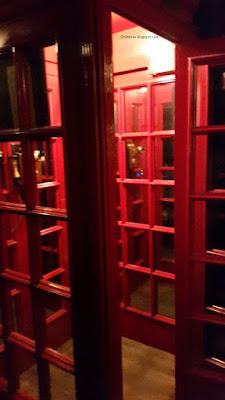 An innocent looking Paan shop with a telephone booth next to it is the first thing you find at the perceived location of PDT. At this point, I wondered if I was at the wrong address until one of the staffers asked me to step inside the booth. He then picked up the phone and punched in a secret number.

And presto! The wall adjacent to me was revealed to be a secret door. A large tavern was completely hidden behind the booth and the paan shop. Oh yes, the hidden den thing is real and not just a namesake novelty. Though it only works the first time. 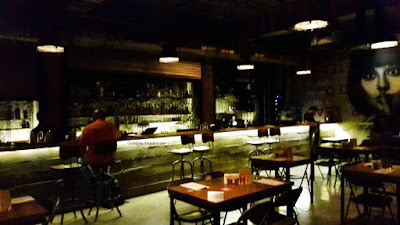 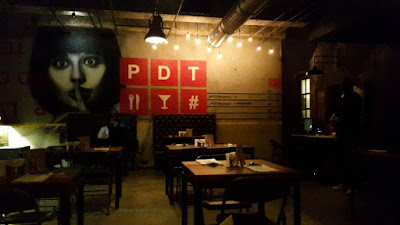 This large dim lit pub is excellent for an evening binge. The furniture seemed like an archetype of the early twentieth century and the chairs resemble those found in old underground gambling dens. The music is nice although the volume could be a little lower since loud music tends to blow the cover of a hidden society(get it?). The lighting is comfortable and time can pass really fast in here.

The food is great but totalers and the purely vegetarian folk may find lesser options. That doesn't deter me of course since I am neither. I was here to sample some goodies from their new grub menu. But before that, I sampled some of their Grog. 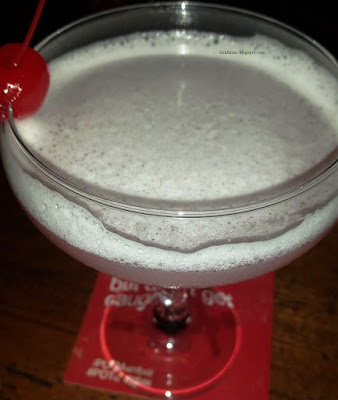 Mary Pickford named after a famous 20's actress is a prohibition era cocktail made out of White Rum, Maraschino(Cherry) liqueur, grenadine syrup and pineapple juice. PDT managed to replicate this perfectly. The cocktail was not too strong and had a mix of tang and bitter sweet flavors inside it. It paired well with the appetizers. It was a great experience for a Rum connoisseur like yours truly. 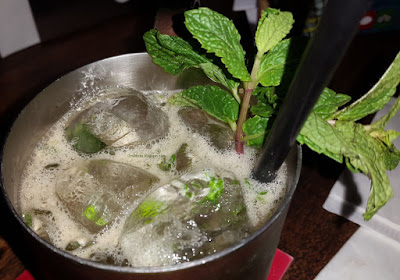 Puzzle Guzzle is a mystery that you gulp down with yer grub. Though it was a lesser experience compared to the concoction above, it still had its highs. This was a moderately strong Vodka cocktail mixed with ginger, grape fruit juice, lime, mint leaves and some cinnamon. Potency aside, I personally was peeved with the mint leaves floating at the top. The leaves may work with some drinks but not this.

Captain : Could this puzzle be a hint to our next clue? 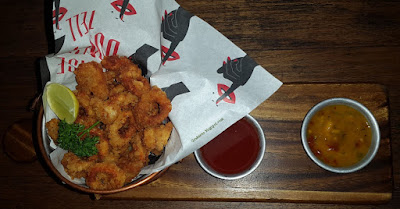 Squid Pro Quo was an average calamari. I felt that the batter coating on this was far too much than required. More than calamari, I felt as if I was eating salted fried batter with Louisiana sauce and Mango salsa. 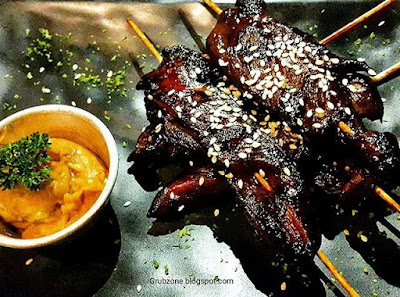 Chicks on Sticks were teriyaki skewers served with a dip made out of peanut butter. These felt like something in between Yakitori and Satay. I love skewered chicken and these juicy bits were quite sumptuous. Though the lack of saltiness may trouble Indian palates not used to this kind of food. 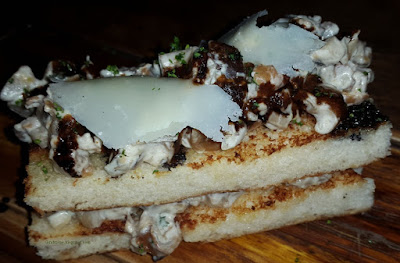 Shroom with a view was an open sandwich with mushroom and cheese. Rosemary rock salt focaccia adds a dominant savory flavor but rejects saltiness. The balsamic reduction enhances the savoriness further along with some sweet tones. I quite enjoyed this sandwich and its unique bitter savory flavor. It felt very earthy and very Mediterranean. However, once again this may not appeal to a person who likes their food salty. But it works well for those who enjoy authentic western food. 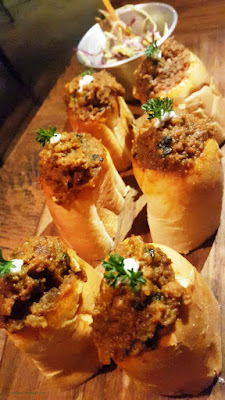 The Keema Pav took a long time before finally making it to our table. And this platter was well worth the wait. The heavenly aroma was both mesmerizing and appetizing. Soft minced meat mixed with spices inside a soft fresh bun was a combination meant to please. This was the best Keema pav I have had in recent times. The only flaw was the liberal use of whole spices. It is a major turn off to encounter cardamom bags while chewing. Other than that, this item is not to be missed while at PDT. 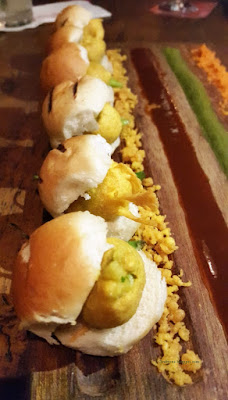 The special Vada Pav platter is a treat for herbivores and carnivores alike. These bite sized Vada pavs were artistically plated with sweet chutney, spicy chutney and onion garlic powder. The patties melt in the mouth and feel very homemade in flavor.  Though not as amazing as the Vada pav at Ashok or Mithibai, this is good comfort food. Additionally, these weren't oily at all.

Captain : Ya, you are right. Hey aren't ya being repetitive now mate?

Quartermaster : I had too much grog mate, gimme a break. 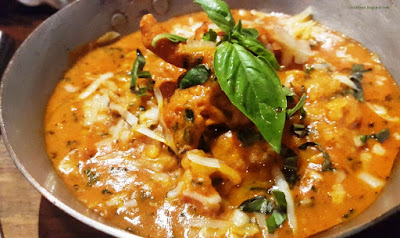 Butter chicken Risotto successfully combined two of my favorite dishes. The Butter chicken was A-ok as far as flavor was concerned. The meat was soft, juicy and savory. The butter was just right as the dish was not greasy. The tomato did not overpower the curry as in most places. The spices were used in moderation. The aroma was delectable, the kind that makes you dash across the room to grab a bite.

The risotto though overpowered by the chicken felt authentic. I forgot to observe whether it was Arborio or not but I enjoyed this dish too much to care. This dish was the highlight of the night. A successful marriage of Indian and Italian. Two of the world's best and ancient food cultures rolled into one.

Quartermaster : Stop wastin yer time and hunt for the next clue.

Captain : What the barnacles? Who was being the hearty one? 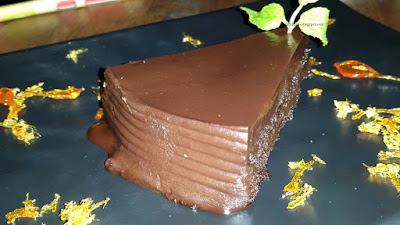 This Chocolate cake was soft, rich, creamy, decadent and full of sweet ganache. It was plated well but its dark coloring on a dark plate made it a challenge for photography. But trust me on this, it looked GOOD. 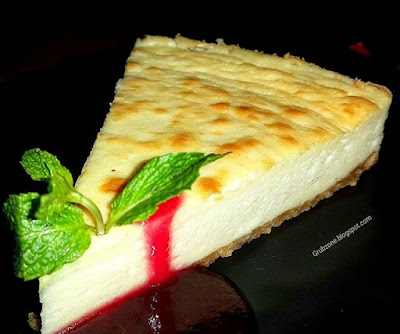 The Baked Cheesecake had amazing optics but the flavor was a polar opposite. The cheesecake felt close to a caramel pudding in taste, strangely. The typical cheesecake flavor was absent. And I could not associate any of the three cheeses(Cream cheese, Ricotta, Mascarpone) used to make different Cheesecakes with it.

The service was decent. Since the place wasn't full, we were attended by two people. As were other tables. Though, one of the servers was not very well informed about the food.

The pricing seems to be tilted towards the higher side. While many items such as the chicken skewers or the Calamari seem to be at par with similar pubs across the city, the drinks and the mains were priced higher. While the food was great and the drinks were simply amazing, I am of the opinion that the prices could be a wee bit lower.

To round this up, PDT is an amazing theme based pub which lives up to its deal. Visit this place for the vibes, the feeling of an underground community, prohibition cocktails, Keema Pav and Butter Chicken Risotto. Given its unique offerings, I suppose that all food lovers should at least visit this place once.

"
Captain : No sign of the next clue. And the puzzle has gotten even more complex. How does an ancient map have a telephone booth marked on it?

Quartermaster : I be pondering on yer six mountains and four rivers thing.

Captain : What of it?

Captain : Is it on our map?

Quartermaster : Doesn't seem to be marked but the co-incidence is too much. Don't ya agree?

Captain : I don't but what choice do we have mate? That is the only lead we have. Six mountains and four rivers ha. Must be quite the fertile land.

Quartermaster : A Land of farmers and their sons.


-I was invited by the restaurants PR to sample the new menu. But my post is objective and neutral.-

Posted by Rishabh Mittal at 2:15 pm