We sailed on the Sea of shipwrecks for the first time. Till now, it appeared calm just like any other day in the ocean. However, we had not seen land for quite some time. It was as if there was no land in this part of the world. But what of the legendary islands and the great taverns that were said to be located within this sea? Were their existence mere myths? Our ship was running dangerously low on rations. We just had two days of stock left. Perhaps, there was a deeper sense in why this sea is called a ship's graveyard. Sailors starve and die. Just then the lookout rang the bell frantically.

I took out me looking glass and saw where he was pointing at. There seemed to be a lighthouse in the distance. It stood on a small island. There was also a small village around the lighthouse. I almost jumped with joy as I directed me mates to set course for the Lighthouse. We could restock now.

This was my first trip to Lighthouse cafe, Worli but second trip for the brand. I had visited and enjoyed the burger festival at the Khar outlet a few months back. This time it was a Food and Wine festival. 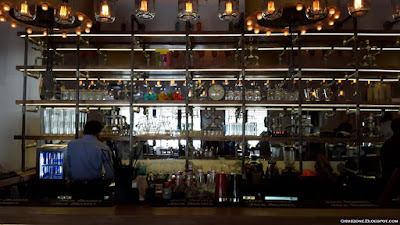 The Worli outlet has about the same area as the one in Khar but it divides itself into two sections. A glass walled and air conditioned outer area faces the Worli roads and feels like a Al-Fresco. While the interior area feels like a bar or a lounge. The decor is a mix of contemporary and a bit of steampunk. The steampunk bit comes from the decor that resembles the inside of an old lighthouse like pressure gauges and industrial pipes. The lighthouse is a dim lit pub ideal for evenings.

Lets say that if the road outside is like a sea then this lighthouse directs hungry and thirsty sailors towards a satiating meal. Makes sense right? 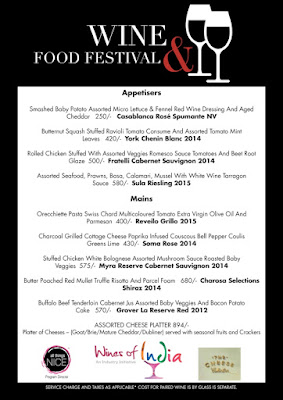 I tried an appetizer, a main paired with its wine and a dessert. 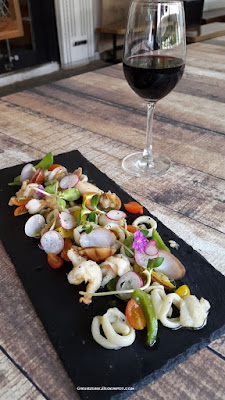 Assorted Seafood was colorful and pleasant to the eyes. For those into Foodporn, a different version of this picture can be found on my Instagram. This dish had Prawns, Basa, Calamari and mussel marinated with white wine and Tarragon tossed in. The taste was almost perfect. It was a nice mix of Mediterranean and French themes.

There was but one problem with this, Basa isn't seafood. A sea fish would have worked wonders adding natural saltiness and an oceanic feel.

Captain : What? Potatoes for 200? That's four times more than what we paid elsewhere.

Grocer : Well, this ain't elsewhere. We don't grow stuff here. We buy it from passing traders.

Captain : But reselling it at this price? You are robbing me.

Captain : Don't judge me from my get up lad, I am no pirate. 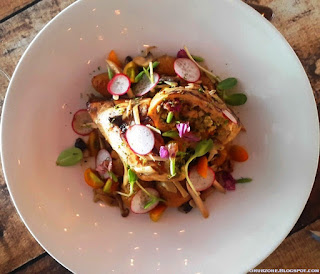 Stuffed Chicken with White Bolognese. This was a well done breast of chicken stuffed with a mix made of white Bolognese, different kinds of mushrooms and roasted vegetables. The insides tasted amazing and pampered the tongue. The exterior felt a bit too well done to me, though this was not any different from chicken breast mains served in other Mumbai restaurants. This problem was compensated by the wine which completed the experience. 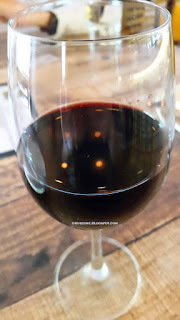 Myra reserve cabernet sauvignon 2014 had a better flavor than the Sulas and other young wines. It provided just the right balance needed to overcome the harsh Chicken breast exterior of the above. I am no wine connoisseur but I can tell when two things taste well. 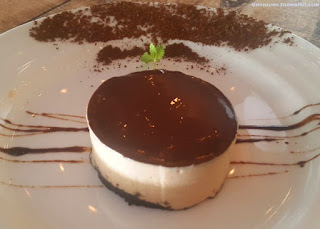 Cappuccino Cheesecake did not taste like a traditional cheesecake. It was too soft and creamy to be one. But it did seem to be made of cream cheese and was quite delectable. I was almost tempted to ask for another portion of this. The sweet cream cheese blended well with the Cappuccino making the dessert feel like a mix between a pudding, cheesecake and a Tiramisu. The base was made of Oreo crumbs rather than Graham crackers which gave the dish a very decadent feel.

Captain : This is so delightful, so heavenly. I could have one more of this.

The service was very professional throughout most of the course. The serving staff looked well kept, spoke English and was polite. The only flaw was that they did not follow the wine serving protocol. I was not shown a bottle and the wine filled glass came directly from the bar. In a wine festival, it is important to follow the said protocol to maintain the theme of the event.

The pricing at LHC appears to be on the higher side. While the quality of the ingredients and the fine dine finish justify a large part of that, the prices could have been a little lesser - say about twenty percent lesser.

Between the two Light house Cafes, I would actually bat for the Worli outlet. It felt better in both crowds and ambiance. The Khar outlet was a favorite of college students while the Worli outlet seems to cater to the working professional crowd. It could simply be an age thing though ha.

"
Captain : So the island was expensive but at least we are loaded for another week.

First mate : Here is hoping we find more islands inside this sea. Dying from hunger is the worst way to go.

Navigator : We can still turn back. One week of rations can take us back to start of this sea. Moving forward would be the point of no return.

Captain : Barnacles, we did not come this far to turn back. Open the sails and move at full speed ahead.
"


-I was invited to sample the festivals offerings and hence the meal was on the house. My review however is objective.-

Posted by Rishabh Mittal at 9:02 pm