The sun shone upon the high seas. The battle was upon us. The flags were raised. Our cannons against their artillery and bazookas. My cannoneer was a much better marksman hitting the enemy ship hard. They had advanced weapons but poorly trained gunners. One of my cannonballs pierced the hull of the enemy vessel effectively sealing its fate. The rogues then steered their sinking ship towards a small isle. This battle will now move to the land. But hark, what does my looking glass see? A small restaurant on the island. Battle does make me hungry. 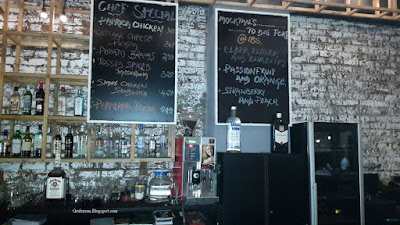 I had visited Boveda(Catalan: Vault) a few months back. A lot has changed since then. Boveda has transformed itself into a bistro from its past bar avatar. Hence, its more in the food mainstream now. I received a mail(My inbox is really tasty these days) from Syesha Kapoor to come sample the grub at her restaurant - Boveda. Not privy to the developments, I mentioned that I did visit Boveda a while back. Syesha however told me of the redevelopment and requested that I give the new place a try. 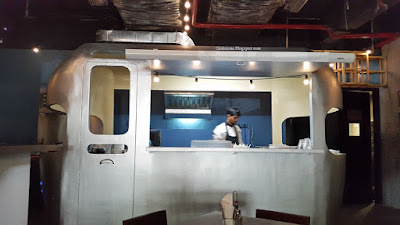 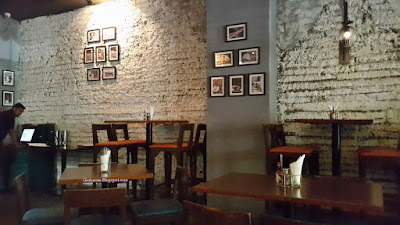 The establishment retains its ambiance. The walls look more elegant with a touch of subtle artistry. The lighting is still dim from Boveda the Bar days. The restaurant is located in the popular food district of Andheri Lokhandwala. It is surrounded by dusty lanes which are quite parched in the summer. As such, the restaurant tends to feel like a calm, cool, dim and comfortable retreat. It is almost like an oasis in the middle of the desert. The bar with its cage like woodwork and bright lighting mimics a rock concert stage.

One new addition to the interior is a live counter fashioned like an American food truck. It feels like a novelty to the ambiance.

Oldies from the 30s and 40s echoed in the premises when I entered. I actually liked that, though I was told that the music was random. In my opinion, the music added to the tranquility of the Bistro.

The culinary commander(because that sounds cooler than head chef) Swapnil Mulundkar helped me with my choices for the main course. Vinod(The resident Captain) helped me choose the new appetizers and cocktails. So lads and lasses, time to move on to ze grub. 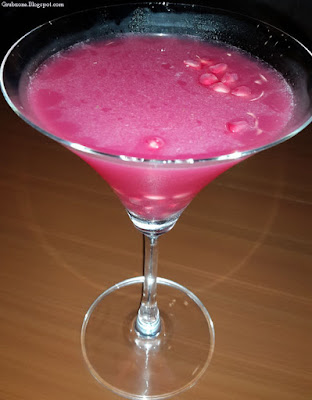 Maiden's Prayer - Legend has it, that once the Gods fought the Titans at the edge of the world. Their thirst was significantly weakening their abilities against their enemies. Seeing this, Hera the sister of Zeus prayed to the heavens and out poured a pink elixir that instantly energized the Gods. Since that day, the elixir came to be known as Maiden's prayer.

If you believed that, then my story telling ability is improving. Coming back to reality, this is a concoction made out of vodka, pomegranate, passion fruit and lime. It feels sweet and tangy while its kick feels spicy. This is not to be confused with 1930's New Orleans cocktail by the same name.

Captain : A battle makes a man thirsty and crazy, this pink elixir be me savior.

First mate : We must find those ruffians. They are hiding somewhere.

Captain : They are after the blue compass, they must be in one of the eateries.

Unkempt Stranger : Psst. Heard ye folks are looking for someone. 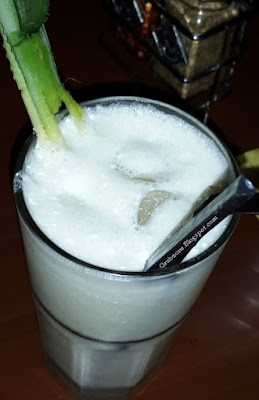 The classical Pina colada was perfect with its flavor and proportions. This sweet cocktail cooled me completely. Wait, has Summer started already? 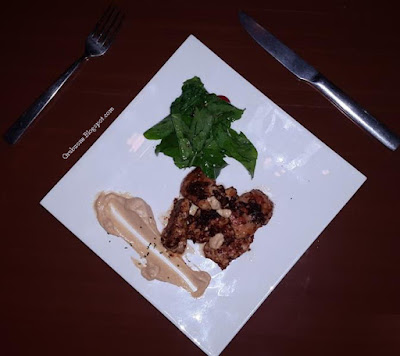 Aioli Scented Chicken was among the establishment's top sellers. This chicken was marinated in aioli and delectable flavors would simply burst out the moment I thrust my teeth into the meat. The flavor was quite addictive. This entree was served with a side of paprika based sour cream. The protein went well with the dip. I am glad I listened to Vinod.

Captain : We are looking for a bunch that appears beat up and smells of defeat.

Unkempt Stranger : Name's Narakdu, I saw the men you describe hiding in an alley.

Captain : Good, can ya lead us there mate?

First mate : And ya don't want anything in return?

Unkempt Stranger : A piece of chicken would be nice. 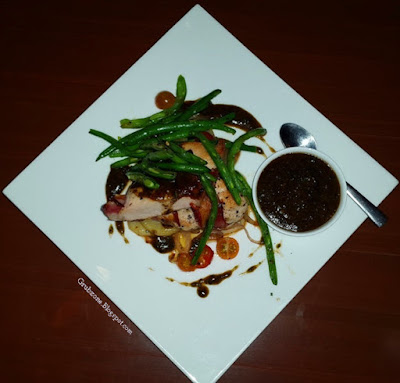 Bacon wrapped Chicken was served with lyonnaise potatoes, pesto jus and a ton of French beans. The Bacon tasted well, though the chicken felt a little insipid. The beans were far too many for my liking, it affected the plating. In my opinion, the quantity of the beans should have been halved and probably chopped into smaller pieces. The pesto jus rescued the day as it countered the chicken's blandness. This dish however does need improvement. 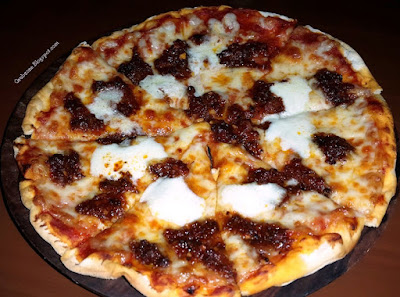 Chorizo Ragout and Mascarpone pizza - This pizza was loaded with stewed Chorizo pieces and loads of mascarpone cheese. The pizza felt creamy, savory, smoked and slightly sweet in flavor. It was an interesting use of Chorizo, the flavor was a first time for me. The pizza was delectable but I felt that there was scope for improvement. For example, a bit of increase in the savory content would work wonders. 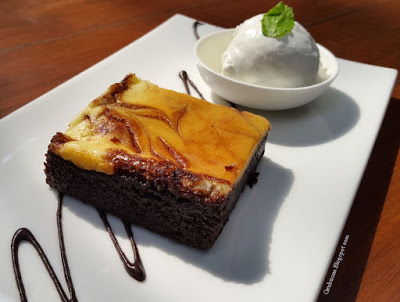 Chocolate Gooey Cake looked really pretty and tasted well. I however felt that it was a bit pedestrian in flavor. The cake itself wasn't very gooey rather being a bit dry and crumbly. This could however be because I was comparing it with the Gooey cake that I had last week. The last one set the bar really high.

The service was perfect, Vinod was very professional. The crew appeared a little small and could be under strain during rush hours.

"
(Party walks to a dark alley)
Captain : Where are the people we talked about?

Narakdu(laughs) : You don't get it do you?

Peter the Cheater(approaches from the shadows) : Gullible lads walked right into my trap.

Rocky : We are going to end this here. And we will take yer ship in exchange for sinking ours.

First mate : (Takes out a sword) My my, things keep getting interesting don't they?

Captain : Peter, Rocky and Narakdu. I offer you a last chance to walk away. Your lives will be spared.

Peter : (Laughs with Rocky and Narakdu) Fat chance Captain, yous gonna leave this world and yer map, ship and treasures will be mine.
"


-The meal was on the house as I was invited by the owners. My review however is objective.-

Posted by Rishabh Mittal at 7:31 pm