A dark night she be. Lit by the stars in the sky and the bright lights of food islands in the distance, the course is set. I be invited to a convention of fellow foodaneers. Yes there be such a word as foodaneers. Excited and intrigued to visit fellow Captains, I move at full speed towards my destination, The little door. What lies behind it, no one knows.

"Let's make a deal. Would you like to go with Door number one ?
But Monty there is just a single little blue door there.
So let us open it then." 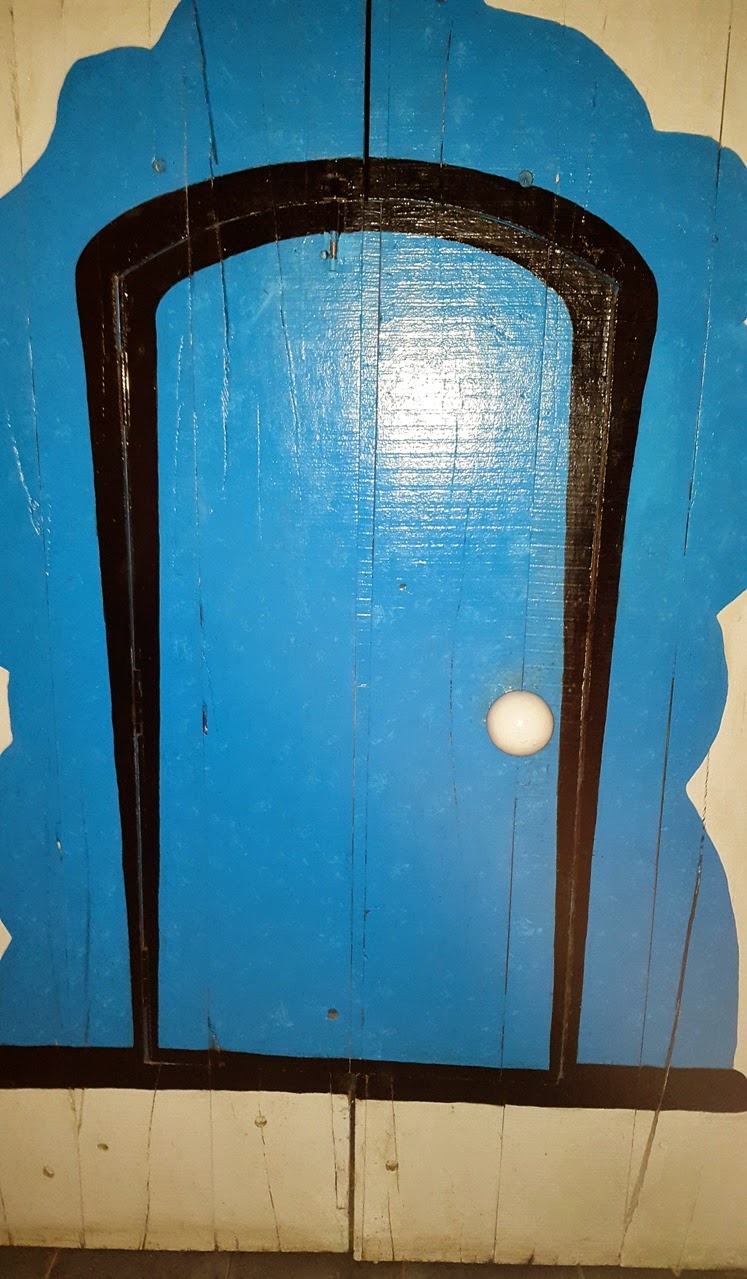 The Little Door is a restaurant lounge which is quite popular in the Lokhandwala food district. Away from the congested Linking road, away from the pollution and in between hotels and residential lanes is The Little Door. This door hides a small world full of cheer and arcane. It was a year's end event hosted by Zomato and quite a few fellows had been invited. Upon meeting a few familiar faces and a lot of unfamiliar ones, I socialized for a bit before I settled for a bite. We were greeted by our hosts, the pleasant faced Zomato team.

The restaurant is split into two zones. The interior area which is a small but a typical lounge with live music and DJ. The exterior is a slightly larger area that would have been classified as Al Fresco if didn't have an organic roof overhead. The lounge was full of college kids and the like. It was noisy and full of cigarette smoke but nevertheless had a special feel to it.

It is not a typical place where one goes for a meal. Its a place where one goes for a celebration. Whether its your promotion or your neighbor's second cousin's friend's promotion - feel like celebrating? Come to TLD.
It may feel a bit off to those looking for good food in a peaceful environment; but hey if you want to down a few pegs and chill then come right here.When you win, you party. When you lose, you party harder.

The ambiance is not perfect but does fare satisfactorily. The crowd could be a bit noisy so it may not make the best place for a romantic date. The area however is clean and there are no annoying insects bothering the patrons. It also feels much more classy than most watering holes in Mumbai.

Our sojourn was flagged of with drinks and entrée from a special menu prepared for us. 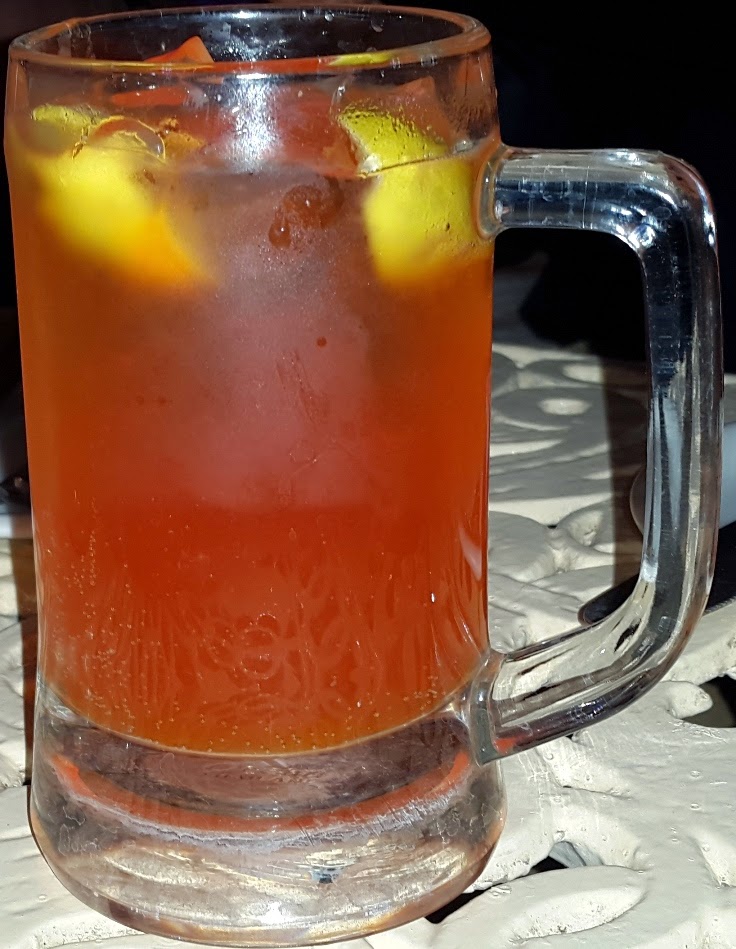 I started with a Peach Beer. It was all right. Tasted a bit mediocre but didn't give me a good reason to complain about. I was told post event that Blushy Pink Sangria would have been a good choice but I was not briefed on the same by the serving staff when I asked for suggestions.

Captain : No rum on the menu, Blasphemy ! 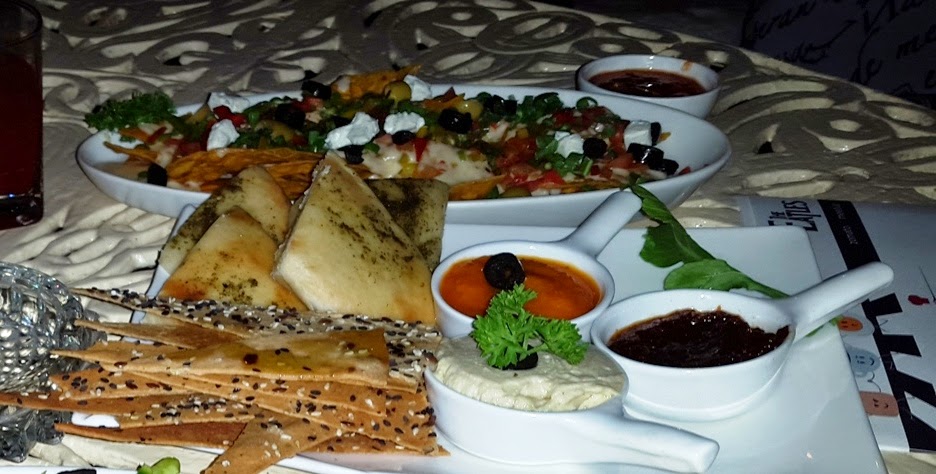 Called Tlata or three in Morrocan, more specifically TLD tlata-this was an interesting starter. Comprising of Pita and thin Lavash, it was an ideal thing to pass away time while talking with other epicures. The Pita was tasty but had a hint of Indian adaptations to it. It went well with the hummus bread. The Lavash was crispy, savory and went rather well with the orange sun dried tomato dip.

Next up were Greek Nachos. A fusion between Greek themes and classical Spanish Nachos. The Nachos tasted great with the feta cheese addition. Despite tasting great, the flavor had an undeniable infusion of Indian spices and flavors to it. My palate loved it but my mind suggested that it wasn't quite continental. However, it served as a great starter.

Next up were the Three Amigos. From left to right - Pita slider, Baby Brava and Vol au Vent. The Pita sliders were undeniably the best of the trio. Had a wholesome Lebanese flavor and left a good after taste.  The Baby Brava was all right, felt a little low on flavor. The Vol au vent is a doughy puffy pastry filled with a dip. The dip did feel nice but somehow the doughy flavor of the pastry felt a wee bit overpowering over the rest of the item. 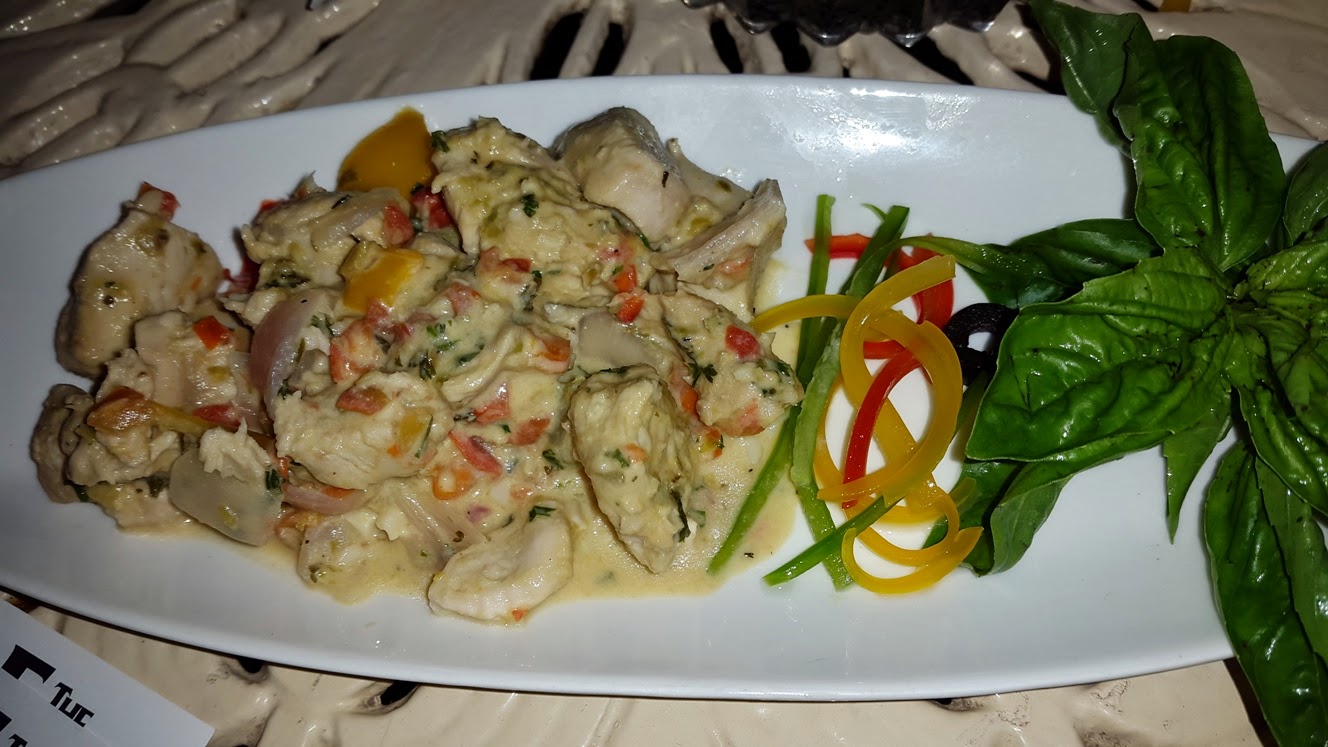 The Pollo Verde was undeniably one of the highlights of the day. Visibly and aromatically enticing, it satiated my gustatory senses to the max. The Chicken chunks were wrapped in a mesmerizing chilli wine sauce with onions, peppers, a hint of garlic and feta added to the mix. Each bite was a delight and if I have to give a golden plate to one item in the night, Pollo Verde gets it easy, That's Right. (Had to make that rhyming)

Captain : I am having this alone. All mine. You can have the rest of the grub lad.

Named Strixxi Mimli, it sure confused me. What in the world does that even mean? Apparently it means stuffed strips in Maltese (Thanks Google Translate). These were chicken strips with a cheesy gooey filling and Mediterranean herbs. However, these resembled croquettes despite the naming. They were tasty and quite addicting. Chicken and cheese are always a good combination. The dip served was Onion garlic mayonnaise which seemed to complement the strips well.

Captain : (Takes out reading glasses and takes out world dictionary) I can't find it in here lad.

Crewmate : Why are you still using that little handbook Captain ? Don't you have a smartphone? 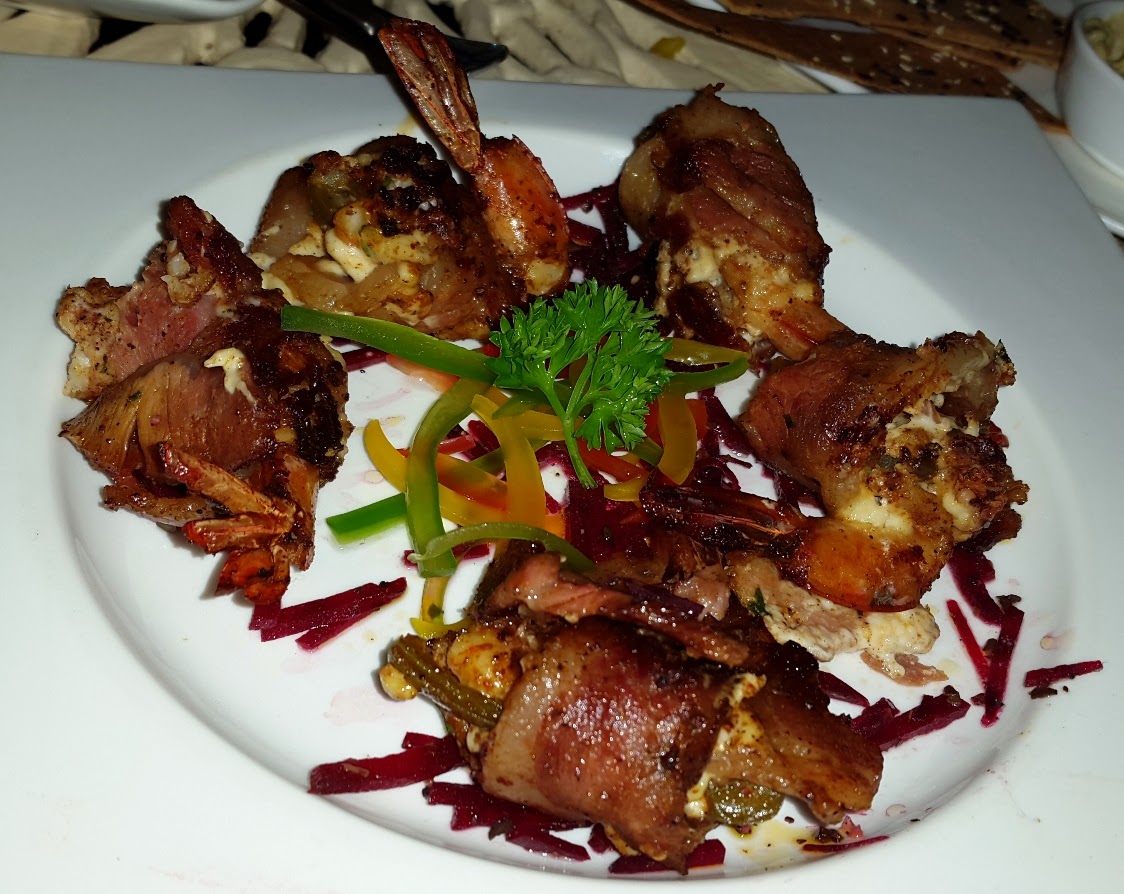 At this point, I was beginning to wonder whether we would have a main course at all or not. But thankfully Shrimp Brochette marked an end to the Entrees. A house specialty wrapped with tasty cheese and bacon, it was one of the best Shrimp preparations that I have ever had so far. Chewy, cheesy and tasty. I would have actually had more of this, had the main course not been there. Takes a close second after the Pollo verde. The chef also left a bit of an artistic touch to its visual appeal. 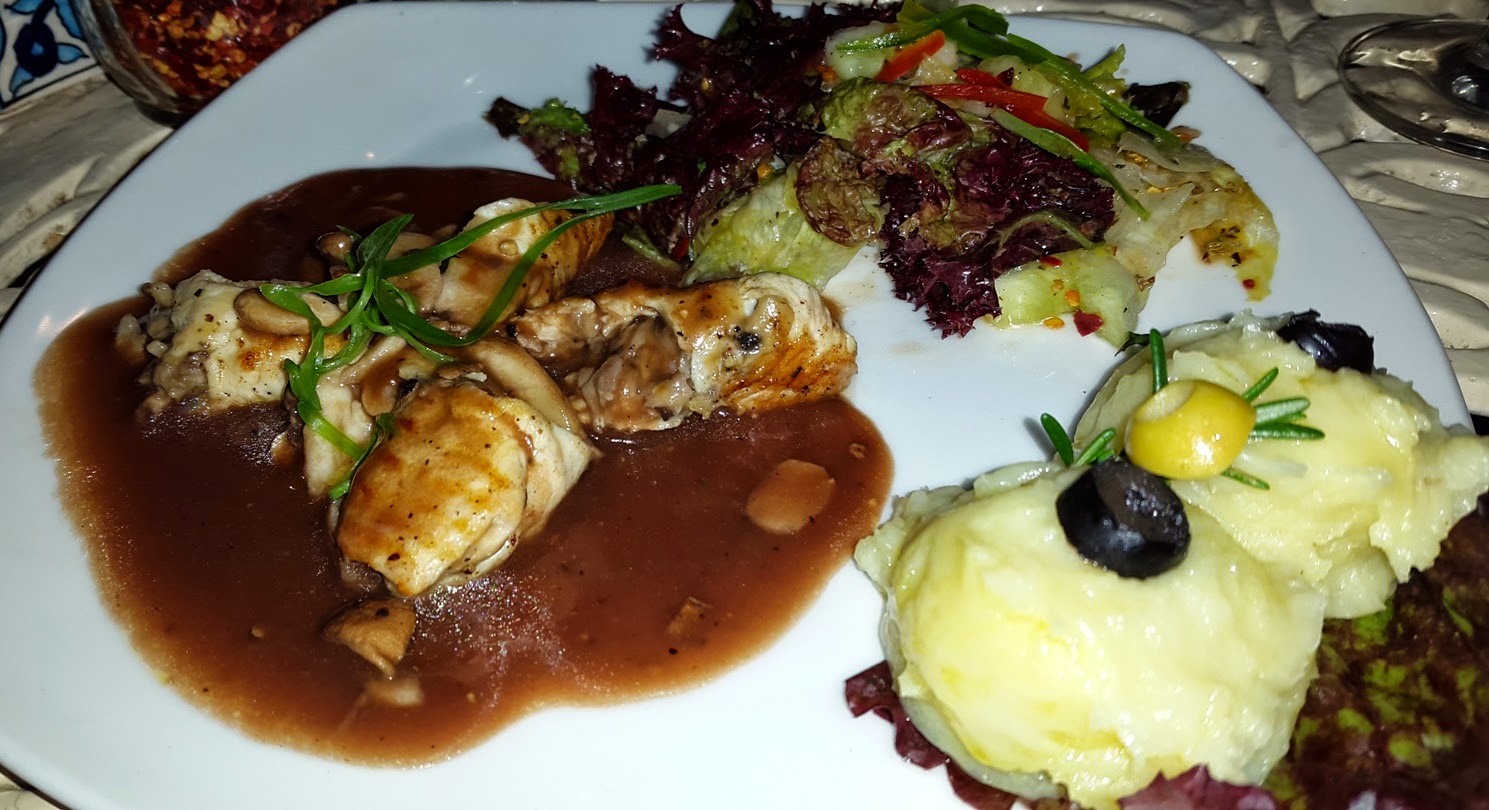 My choice of main course was Pollo Con Salsa Al Pepe (Chicken with Salsa in English). Thin portions of chicken breast rolled with mushroom. Then grilled and served with pepper sauce. Complemented with a creamy potato mashing. I have had a similar preparation to this before in an Italian restaurant. The taste here seemed to lack bang in comparison. It felt quite mild. The portion sizes also were not filling and the dish somewhat felt like an extended part of the entrée course rather than the main course. 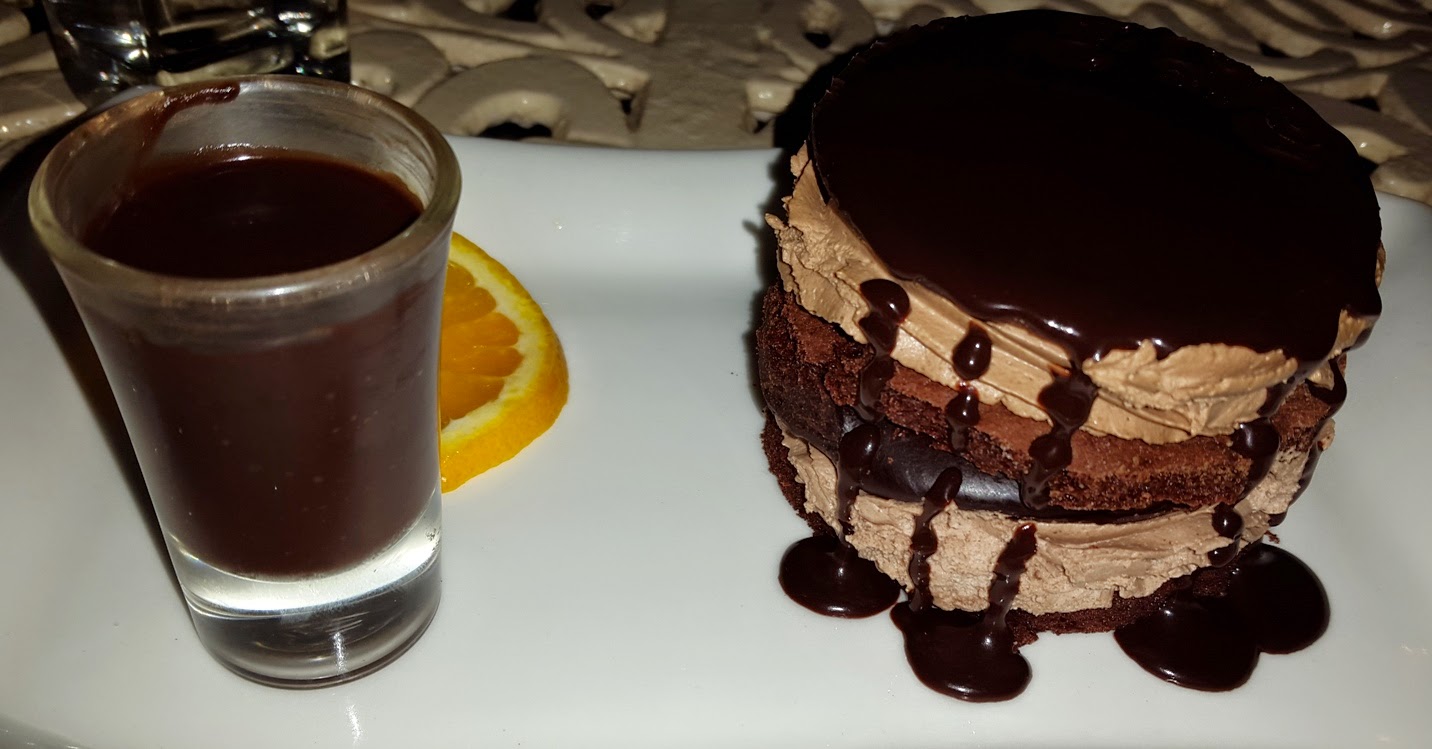 The Rum drum is a house specialty and the invention of the restaurant. It is visibly enticing, full of rich chocolate and good quality Rum. Billed as an eight textured chocolate cake. It definitely has several layers of cake, chocolate, mousse and rum filling. The mousse was very well layered and looked like a fine work of art from the outside. It was one of the favorite creations of Head Chef Nikhil Kedar. He spoke about it with such pride that I knew that it would be special. The upper hard shell was a little tough to break and it presented a risk of demolishing the entire dessert. However, I managed to get past that hurdle and enjoy my dessert. Loved the soft mousse mantle, the cake core with the rum surprise hidden within. A great end to a good evening.

Crewmates : (Wiping the Captain's sweat) Are you all right Captain ?

Captain : Yes, I managed to cut this thing without blowing it up.

To conclude, I'd say that it was a great experience. A little noisy, cramped and smokey but works well if you are in the mood for a celebration. It is reminiscent of premium watering holes and good pubs across the city. In comparison with similar premium pubs, TLD has lower prices. It is the kind of place where you could have a drink or two with your buddies every day. Does need to improve on the food and perhaps un-cramp the space.

"Lift the Anchors and unfurl the sails! Let's cruise under the stars, singing the ocean's song."

-I was invited to a Zomato (#ZomatoFoodieMeetup) event where I met fellow food writers and restaurant critics.-

Posted by Rishabh Mittal at 3:00 am