These were uncharted waters. Dodging an ice berg and a possibly a Kraken, me ship made it to Powai. I took out the map and me compass. I felt, I was a bit lost. I could not spot land anywhere. After a tiring journey which is best described in my other bulky journal, I made it to my destination. A land full of fancy restaurants and grog holes. I stepped in front of me destination and raised my hands in joy. Hurrah! Land Ahoy at Chili's.

It had been a long trip from the Northern suburbs. There I stood staring at Chili's logo. It looked like some kind of a UCO. An Unidentified Chili Object to be precise. Chili's is yet another American chain of restaurants to enter India. It specializes in American food and most notably the Tex-Mex cuisine. But its level of food classifies as Gourmet grade or fine dine. No you have not tasted true Mexican food at Taco Bell's. If you want the real deal and good food, Chili's is a far superior and genuine option.

When I sat down inside Chili's, I only thought of one thing, "The food better be darn good. It has to make up for the long trip." And it was. 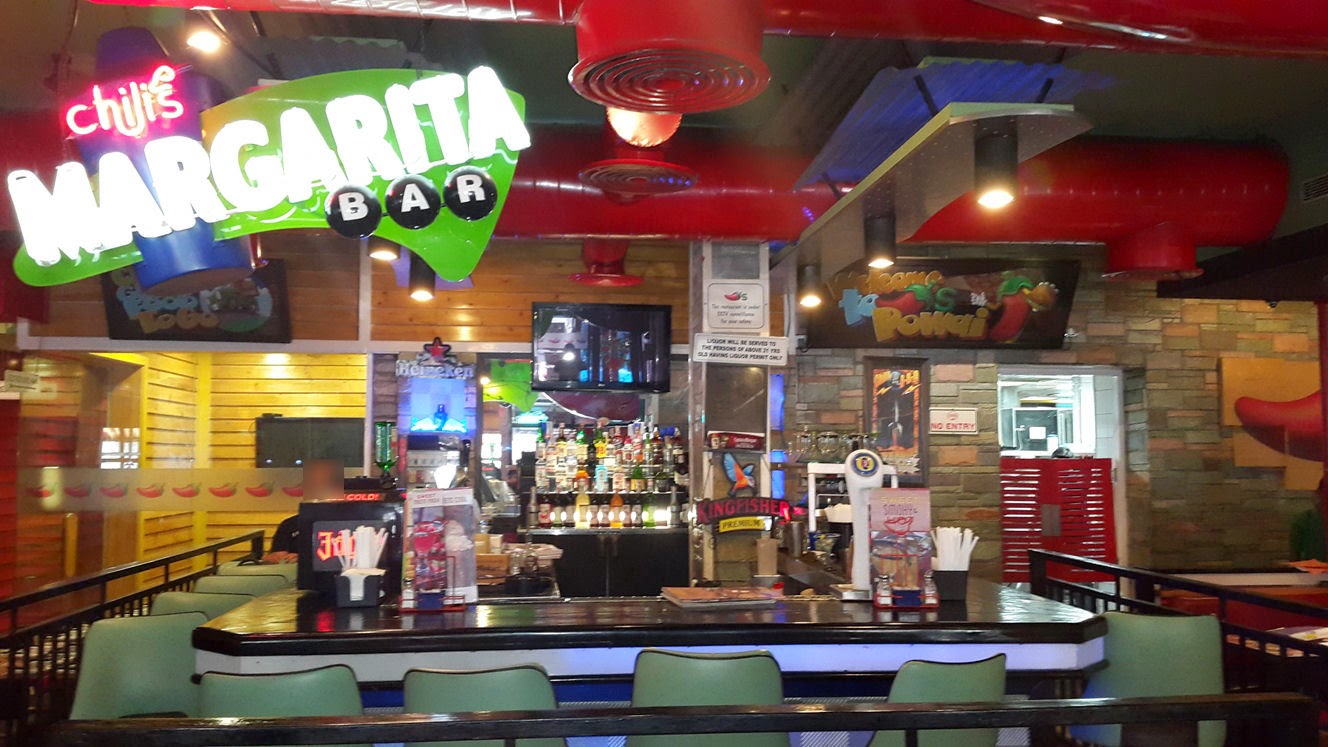 Captain : A fine restaurant this be. Its crew be so well mannered.

Crewmate : Captain your eyes are glittering with admiration.

Captain : Shut yer trap lad. I am a man of the sea. My eyes don't shine like an anime character.

The service was excellent. I had read a few complaints regarding Chili's service but I found no issues on my trip whatsoever. The staff is pleasant and well trained. They handled my table and the ones around me quite well. It is probable that it maybe a bit slower during rush hours but that is excusable.

The restaurant has a grand ambiance. It has a large dining area and a really classy cocktail bar. The bar seems to blend in well with the surroundings. But once you step into or near it, it transports you to an other realm. It feels like you are in a pub and not a restaurant. I really liked the large Margarita sign. Pretty sure it has been clicked a hundred thousand times before but I shall click one for keepsakes anyway. Good memories.

Before my meal began, I had an opportunity to meet with Chef Abhijeet Gomare who is the culinary contact for Chili's South and west India. He is a bit of a celebrity in the culinary world with articles related to him appearing in mainstream media. He told me about Chili's plans and vision for the future. It was a great experience talking to him. When he is not busy coming up with new menus, he is probably busy collecting flyer miles traveling back and forth between Chili's restaurants across many cities.

People from the Western suburbs and Sobo area do not travel to Powai that often. It is often considered too far away but it is quite developed and to some extent even more than Sobo area itself. Chili's was a good reward for my quest to Powai which surprisingly is easy to reach from western suburbs.

Service check, Ambiance check, Time to move on to the (Drum rolls) Food ! 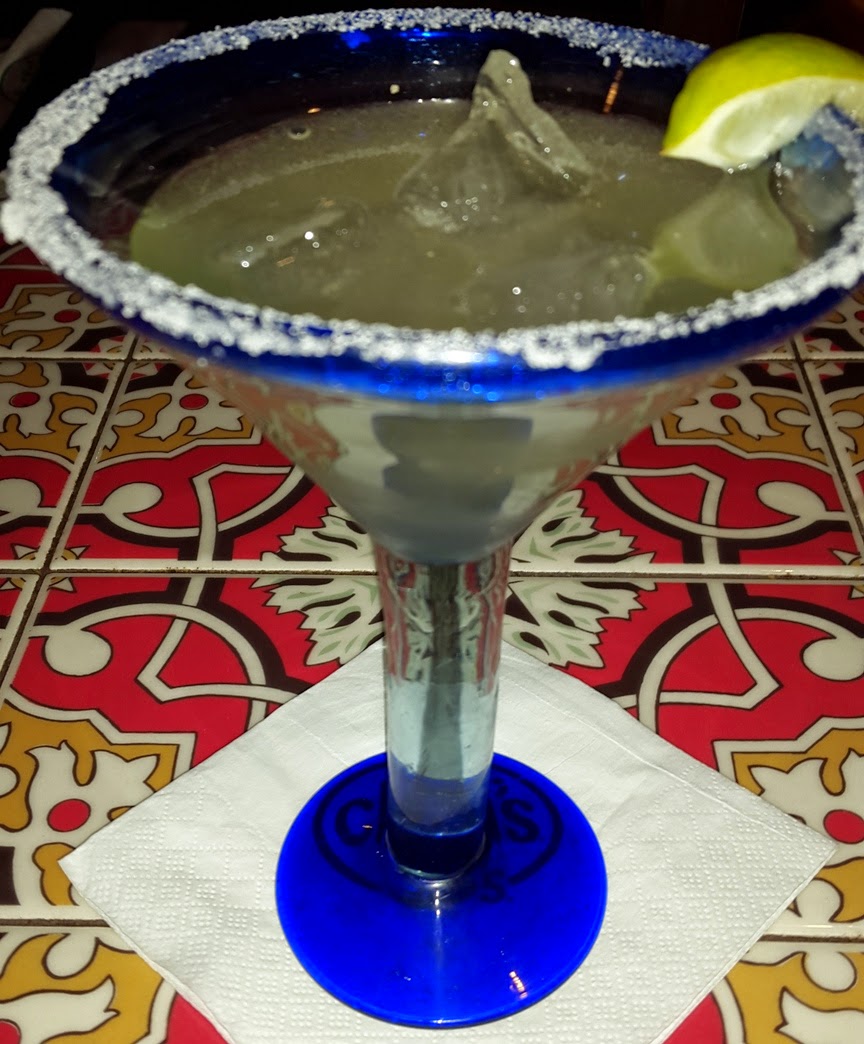 Before my appetizers were served, I chose to start with a drink. Anything made at that awesome cocktail bar has to be awesome. I started with Chili's El Presidente Margarita which was a recommended drink. The glass, the appearance and way the drink was served out of a blue mixing tumbler. It made an excellent presentation. The drink was a mix of lime, Brandy and the good ol Tequila. It was tangy, sweet and fizzy. The mixer knew what he was doing. I think it could be my regular for my future Chili trips.
"You ain't had Mexican till you have Tequila pardner." 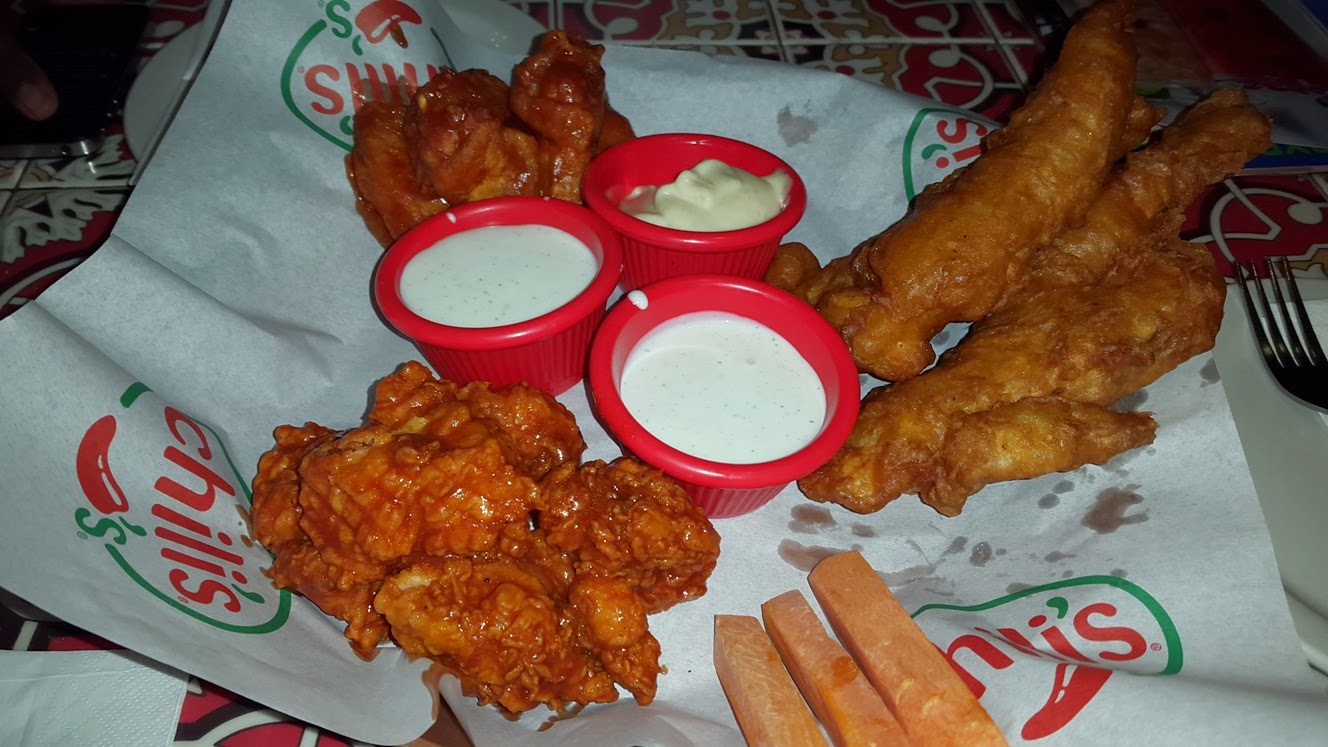 I chose the Triple Dipper option on the menu as it allowed me to experience most of the non vegetarian appetizers. The Chicken crisper was hands down the MVF (Most valuable Food) among the three. In the picture they are located towards the upper right corner. These are Chicken tenderloins wrapped in flour. Finger licking good and went great with the ranch sauce and honey mustard dips. Although, its best suited to be eaten with Honey mustard.

The item in the Top left corner is Buffalo Wings. It is the big daddy of all chicken wings. Much better than the sham you have at KFCs. It is bony but tasty with the sauces wrapping the deep fried chicken adding a bit of tang to it.

The last item at the south end is the Boneless Chicken wings. Same as the Buffalo wings but no bones and more meat. Good for those of us who don't like to deal with messy bones in their food. These felt juicier than the Buffalo wings. If I had to choose between Buffalo wings and the boneless ones then the latter gets my favor.

They were served with carrot sticks which were part of the combination.

And let me assure you, these were served in large king size portions. It was difficult for me to even finish these alone. Totally worth the money.

Captain : Its so tasty but I cannot finish this.

Crewmate : I often wonder Cappy, Why don't we get the rest of the crew to join us in restaurant trips?

Captain: Ever heard three's a crowd? Imagine that with ten lad.

My main course started with Sweet Mustard seed baby back ribs. I have never had pork ribs before. And this was certainly a large and an overwhelming dish. Served with a Good ol' corn on the cob and french fries. The corn was sweet and juicy. Not something we are used to here in India where Bhuna Bhuta is crispy and salty. The fries were rich and definitely leagues better than what one has at a certain clown themed American burger chain.

The ribs can be a bit of an effort to eat. But its worth it. Juicy Tender meat on ribs coated with Chili's own Barbeque sauce. The sauce is made with mustard seeds, honey and Worcestershire sauce. It is one of the best BBQ variants I have ever had. I am instantly won over by anything with BBQ sauce, so I really loved the ribs. Despite not being a person who likes bones, I found myself enjoying this. The meat was tender and the taste had sunk in quite well. There was not even a single bite that felt dissatisfying.

This item was found on their special event menu which is an ever changing list of items they test with their customers. The best items make it to the main menu while the rest are given a Spartan farewell. I am told that this item is most likely to make it to their main menu but just in case if its not, now would be a good time to have a portion of this because "Zindagi Na Milegi Dobara" 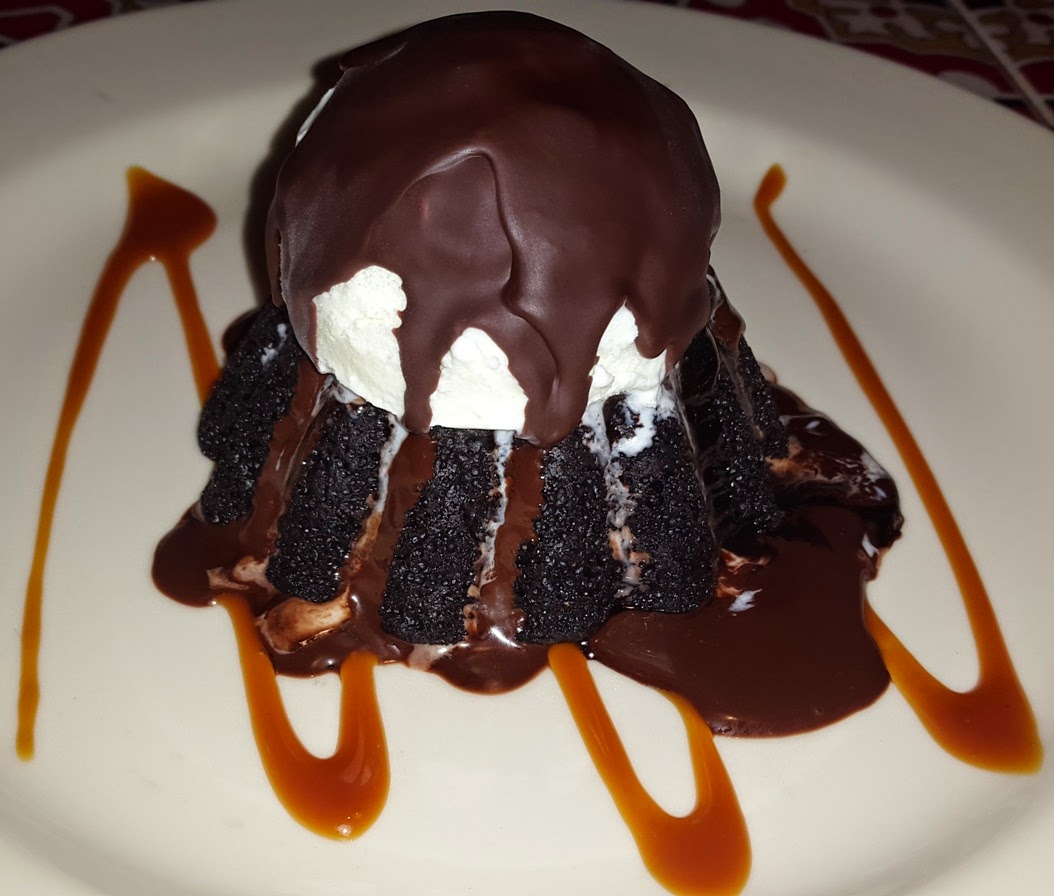 This is a volcano that I would love to see go off. Chili's Molten Lava Cake is one of their most popular desserts. Despite me being on team Cheesecake, I still opted for this on the restaurant's General manager's recommendation. And a great recommendation it was. Soft Chocolate cake filled with rich gooey chocolate lava. Topped with a dollop of Vanilla ice cream and covered with rich chocolate sauce. And the Caramel artwork for presentation.

This item was visibly enticing. Looked like a fine work of sculpted art. The chocolate sauce trickling down the cake ridges was a clever way of enhancing its presentation. Such shame to destroy it and a bigger shame not to eat it ha. The best way to eat it is to have all layers in each bite. That is the way that it is intended to be eaten. If you attack the layers one by one, you will ruin the experience. It is hard but having a bite with the cake, choco lava, ice cream and sauce form the complete alchemy in your mouth and taste great. Definitely Recommended.

Captain : This lad be a true treasure of the culinary sea.

Crewmate : I understand Captain, now please share some with me.

With the dessert gone, it was time wrap things up. The meal was memorable. The people were memorable and I would definitely remember that cocktail bar.

Chilli's can be a little expensive. But it is completely worth it. Their portion sizes are King size and they definitely fill you up. It is one Mumbai's better restaurants and a nice stop for food lovers everywhere. Also, makes it to my list of top five for 2014. 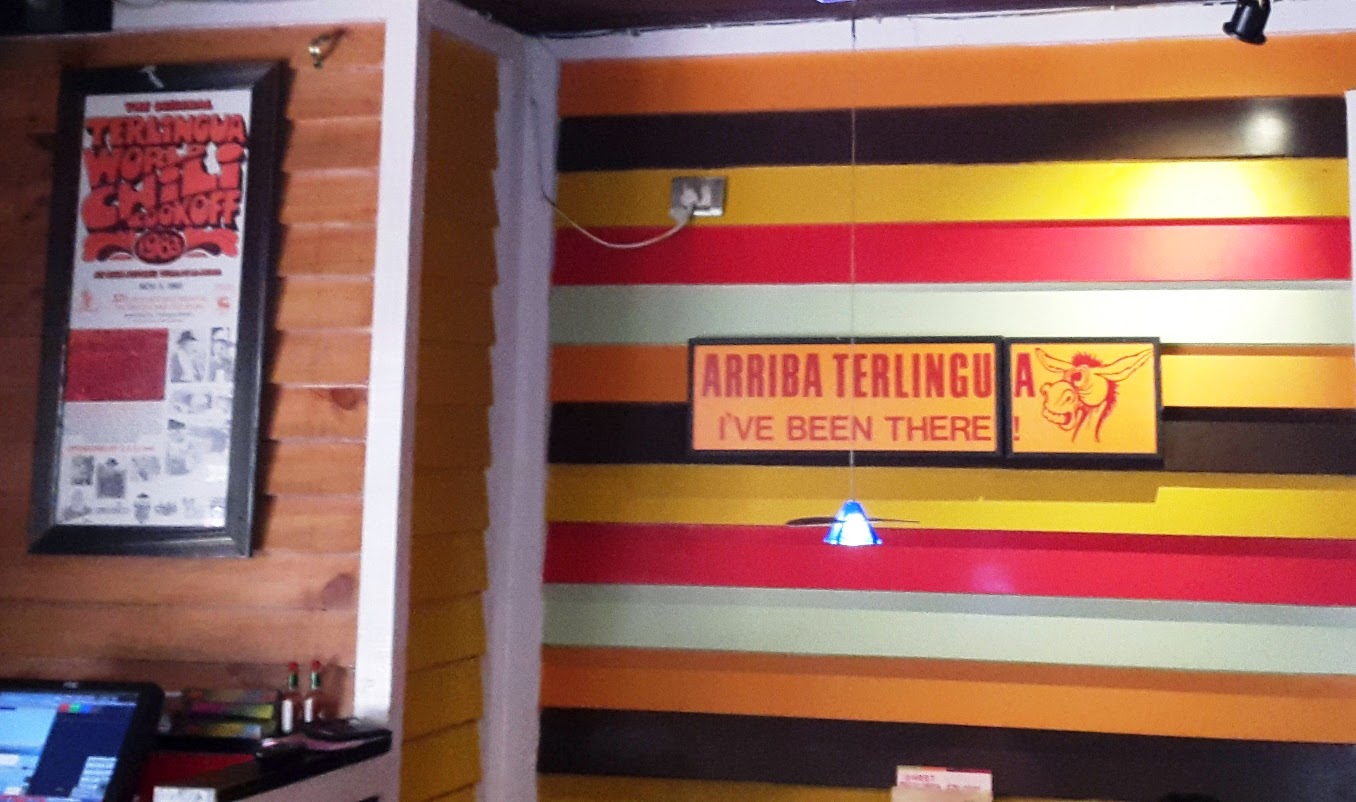 I found this as a nice keep sake. To show future whipper snappers a memento of my First Chili's trip. 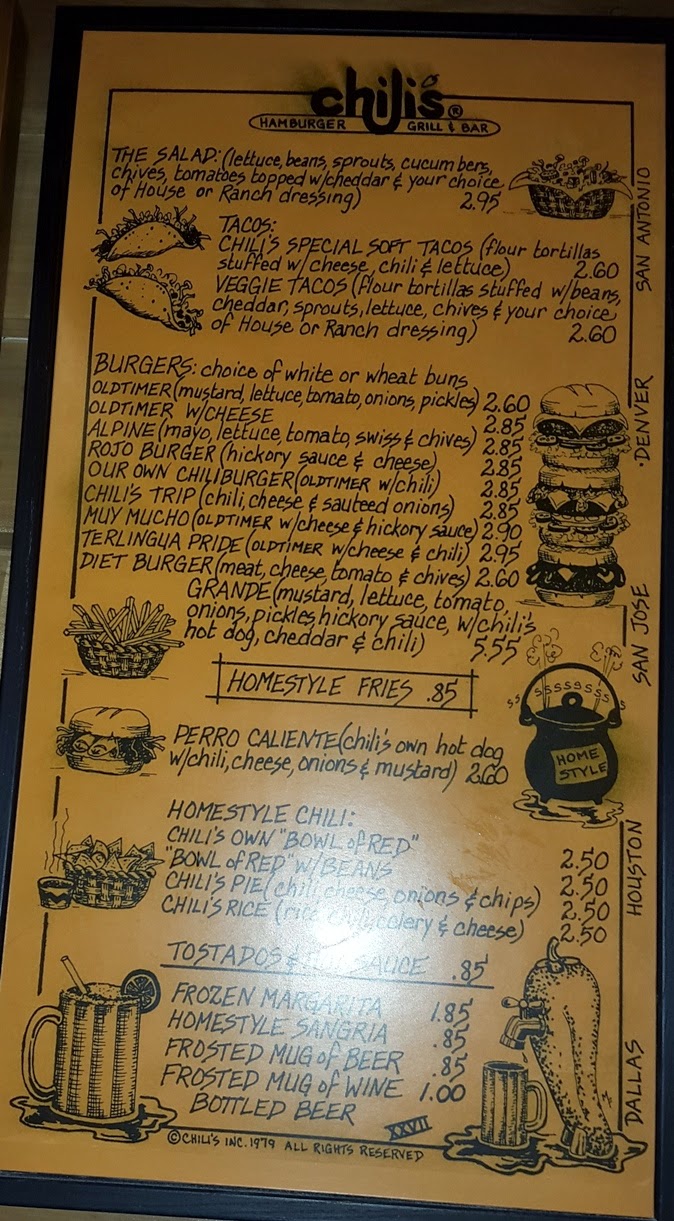 Here is a picture of Chilli's first menu when it opened shop in the 70s.

"We will probably be back here someday lads. But for now, it's back to sea faring for us."

-I was invited by Chilli's to sample their food. Special Thanks go to Anisha Dalal from El sol who arranged the meet.-

Posted by Rishabh Mittal at 5:39 pm