During one of me island runs, I sailed through well known waters. Several islands dotted with hundreds of restaurants passed me way. Too much choice as the crew looked at me to make a decision. I finally decided to drop the anchor at a reputable pizza place. The place appeared small but promised better food.

I just decided one day to land in Andheri Lokhandwala and try out the nearest reputable restaurant. I called it my weekly epicurean quest or Foodie run for those with vernacular appetites. Being in an area full of restaurants, I got confused easily. So I pulled out my phone and browsed nearby restaurants. And I decided to choose Debonair because...it was the closest place nearby and had a decent Zomato score.

However, my enthusiasm reached a plateau when I found that it was more of a takeaway place with a small Al Fresco for diners who preferred eating there. 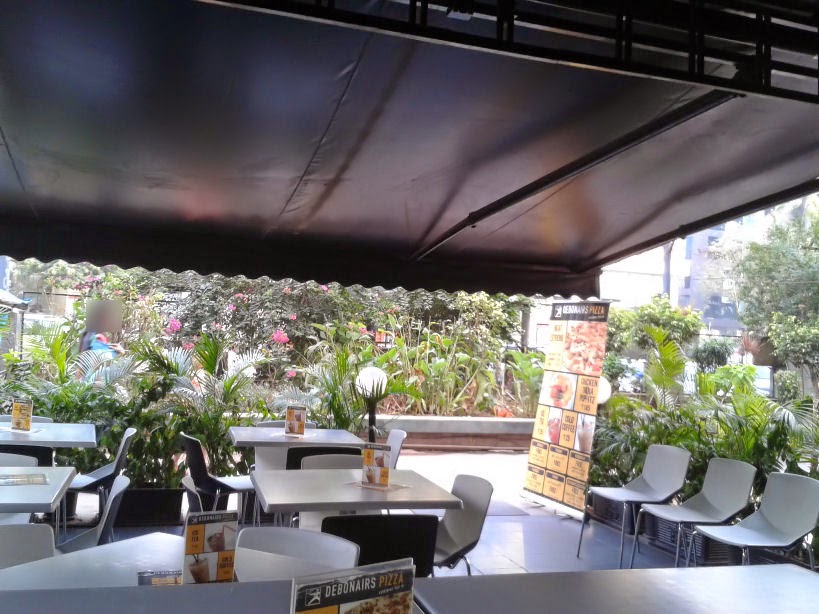 Captain : I am having second thoughts mateys. So much smoke and noise.

Crewmate : Maybe we should take their advice Cap. Order Pizza instead.

Captain : Have you gone Bonkers lad? Who would deliver across the sea?

Debonair's is a South African pizza chain that has recently opened shop in India. However, the pictures of its South African menu card and its Indian card are remarkably different. The pizzas on the Indian menu appeared less appealing. It was as if they were the no-frills version of the South African variants. Unfortunately, the pricing appears to be similar. (Yeah I converted rands into Rupees.)

The crew was a bit pushy, trying to convince me to order instead of dining on spot. I smiled and told them how far I lived then they took my order. There was some special offer going on and I would get a smaller pizza over a larger one for free. Good for people nearby I guess. Free pizza is always good.

The Al Fresco is not very impressive. Flying insects, smoke from the nearby main road, too much noise and the curious passers who love to stare at what you are eating. But well, the place is a take away joint after all. 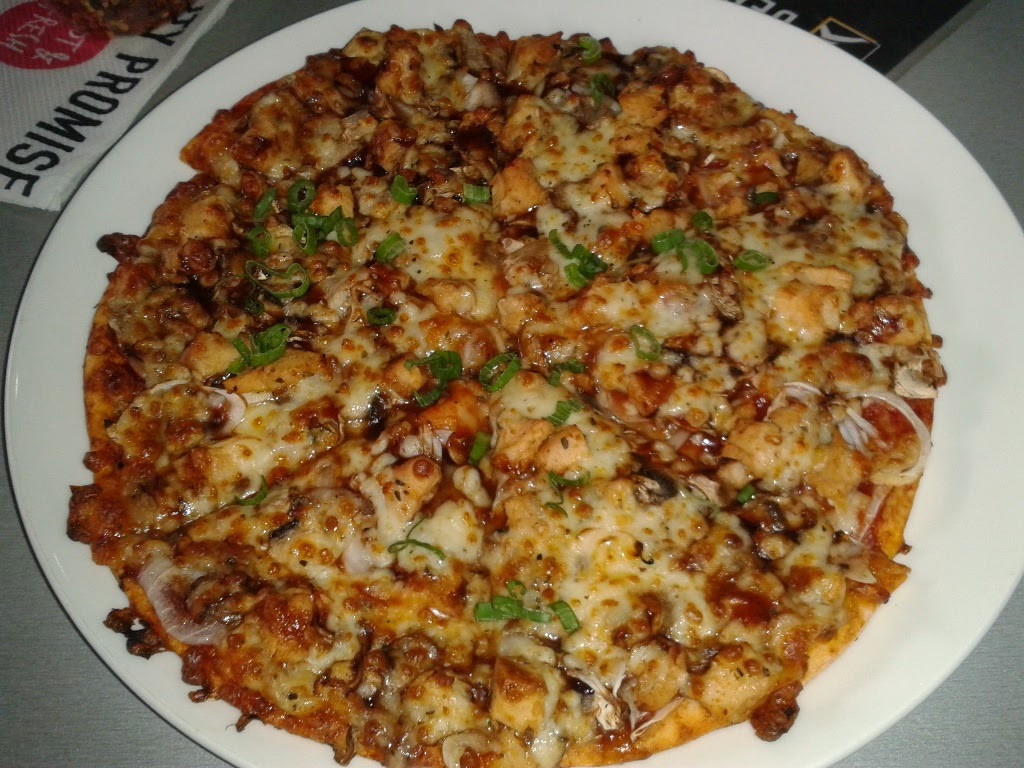 The Barbeque Chicken pizza was very mediocre in taste. Not something, I would rave about. The base was the standard bread found in most run of the mill pizza parlors. The cheese was ample but the the barbequed chicken was a downer. Too many greens for my comfort as well. The taste was mild and I had to load it with Oregano seasoning to get somewhere. This pizza was still better than what I am used to having at Dominoes. But still scores much below Smokin Joes and Pizza hut. The pricing feels affordable with the offer so it makes it an attractive option compared to Pizza hut. Good to go if you want a quick pizza fix at your home. Not that good of a choice if you are on the hunt and looking for good pizza. The greasiness can be on the annoying side of the spectrum too. 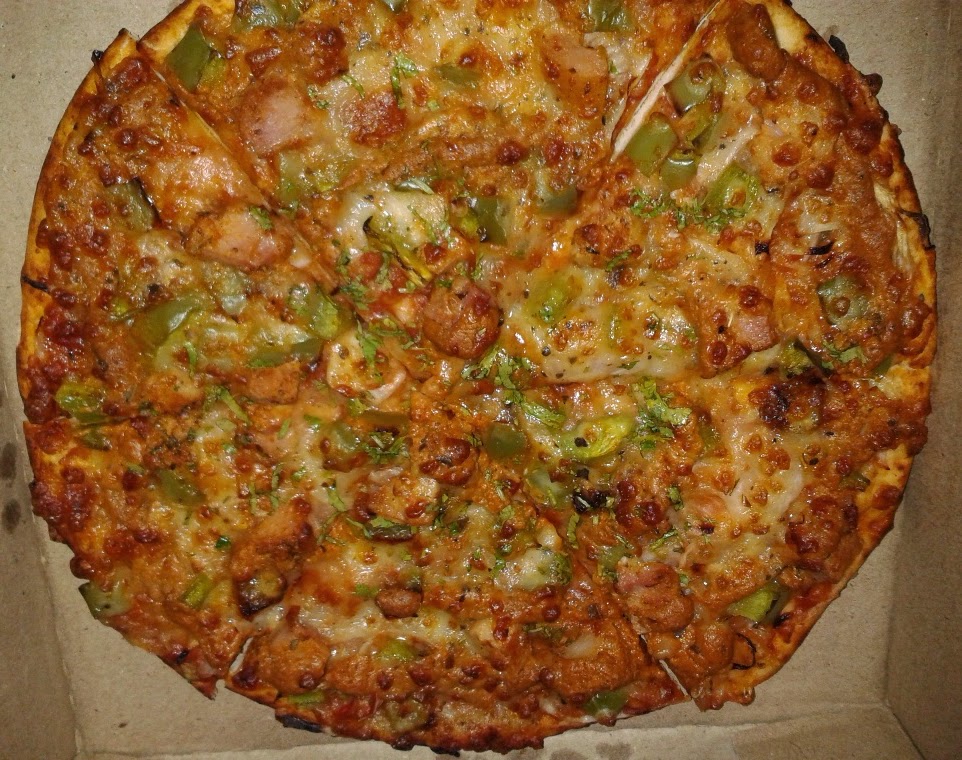 Chicken Makhani or Butter Chicken pizza had a better visual appeal but suffered the same anomalies as the first pizza. Note the sheer number of greens for a meat pizza. This pizza is a classic Indian-Italian fusion and borrows heavily from the North Indian delicacy. However, Debonair's variant did not make the cut. This one felt low on cheese. The chicken tasted much better than the BBQ variant but it lacked the distinct butter chicken flavor which I sought.

Captain : The pizza be lacking something.

Crew mate: I heard its better across the ocean.

Captain : Then, I shall try it across the ocean. This outpost be a disappointment.

Debonair's has a lot of potential but they have not tapped into it. The Indian variants feel like poor cousins of the South African variants. Even the menu pictures of the South African branches appear more appealing. One feels that they need to work on the taste and be a bit more generous with the toppings. It is meant to cater more to a mass market audience but even on that front it loses out to the likes of Smokin Joes. They should try and bring the Indian standards up to the South African one.

Would be fair to say that the pizzas lacked pizzazz.

Pizzas can be expensive without offers. So it is better that you order on a day with the offers. The offers change depending on the weekday so you may not get a free pizza every time.

On a positive note, I found it funny that they named a pizza Jonty. Clear reference to the popular South African cricketer who has a huge fan base in India.

"All righty lads, back to the salty seas for us. Let's see where the winds take us next time."