I sat bored in me bridge as the ship traveled through well known routes. The quartermaster suddenly barged in looking all zealous. His eyes suggested that he had seen something new. I quietly followed him out and he handed me my looking glass. I looked in the direction that he was pointing at and saw a tavern in the distance. Not just any tavern mind you but the famous Harry's which I last saw in my trips to the Straits of Malacca.

"This better be the real deal," I said as we steered our ship towards the closest dock. 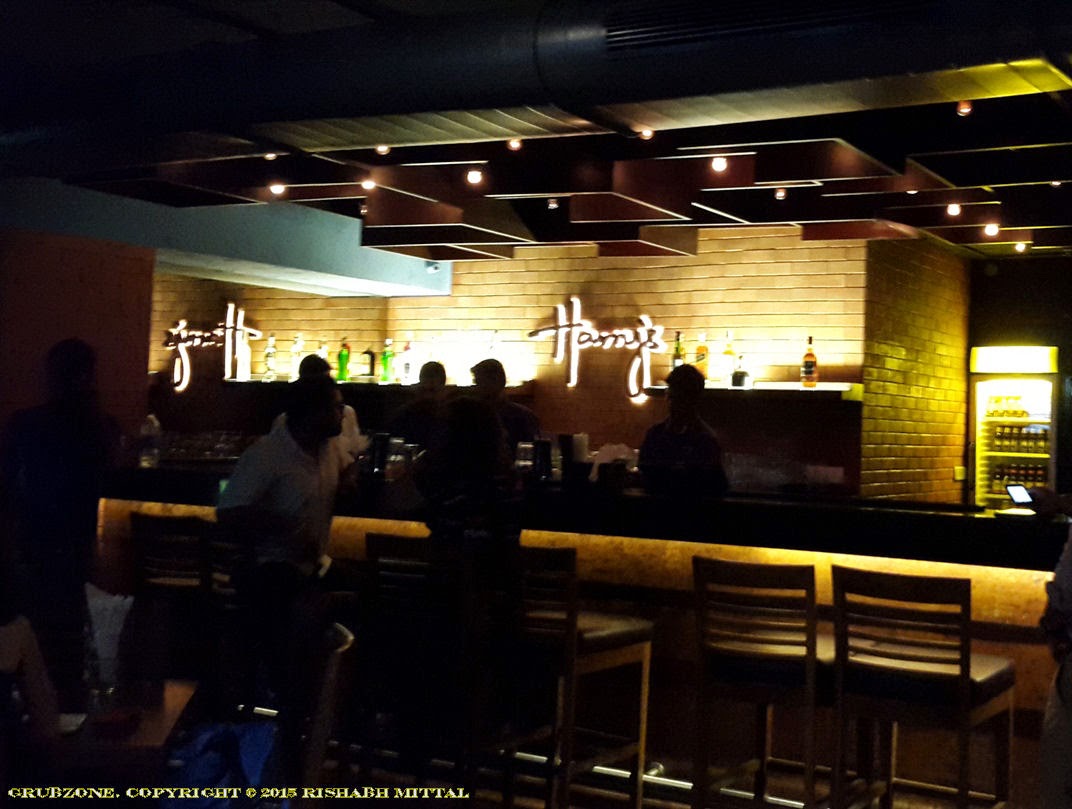 Harry's Bar + Cafe is a well known brand in Singapore and has recently opened shop in India. When I first read this outlet's name, I erroneously read it as Harry's Fun Republic(Combining the name of the place its located in) but wow that actually worked to good effect. Friday Evening at Harry's was indeed fun.

The ambiance comes off as a classy uptown pub. Indeed, one forgets that they are down in the suburbs when they pass the door. The pub was already full of early evening comers. And thanks to an IPL match on the weekend, a good lot was noisy as well. Dim lit with golden lights, it felt quite cozy to settle in for some evening entertainment.

The pub feels very western and has everything one would expect from it. A DJ, a bar counter, a large screen playing the IPL and even a pool table at the end. Whether you are alone or chilling with your buddies, Harry's is definitely for a great choice for some grub-grog. As for me, I was part of a Food Bloggers Association of India meetup and had the honor of meeting some of Mumbai's finest food bloggers.

And the evening reached stellar heights with the presence of celebrated Chef Vicky Ratnani (Vicky Goes Veg fame) who joined our table. 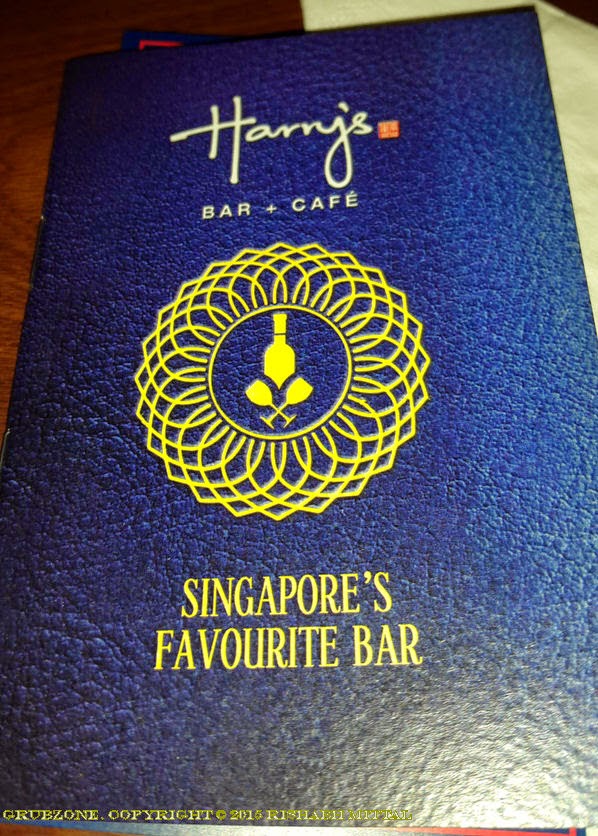 This be the passport to Fun.

Moving on to Grog and Grub. 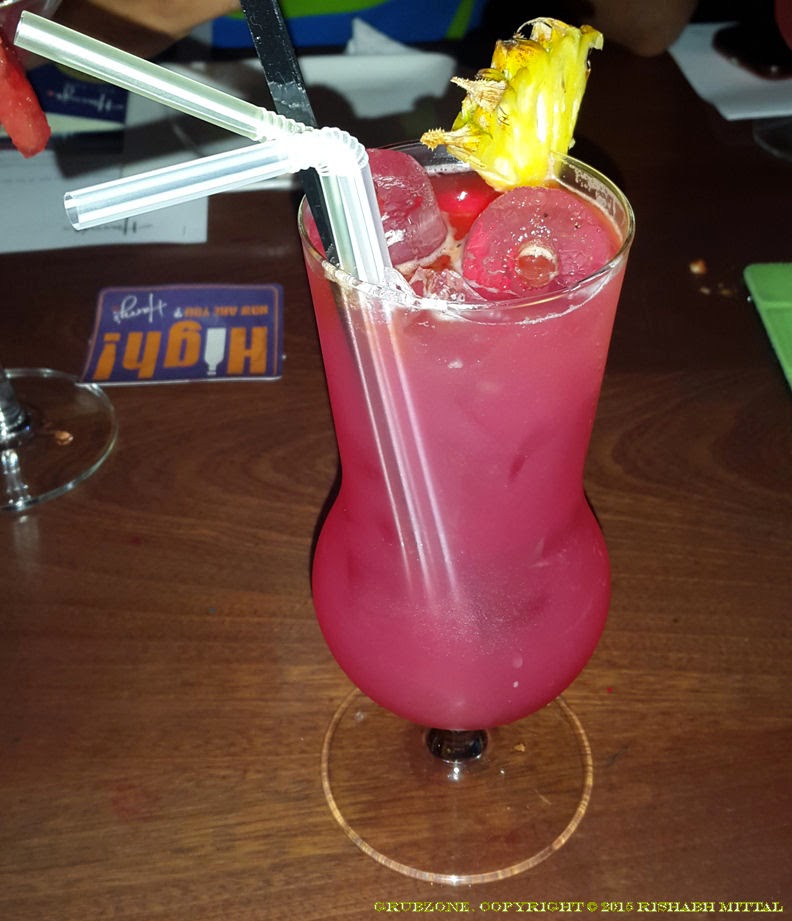 Harry's has a large number of beverages including a large selection of wines. There is also a large number of popular cocktails. But what a shame it would be if I don't try the house specialty - "The Singapore Sling".
Slingshot into divine oblivion with this sling. Made with a blend of Cointreau, Cherry Liqueur and pineapple juice - This is a mild cocktail that feels very tropical.

Do note that the drinks were served with Marinated Olives and Feta in a jar. This item was mildly addicting but sadly the dim lighting and its color did not allow me to get a legible picture for the same. 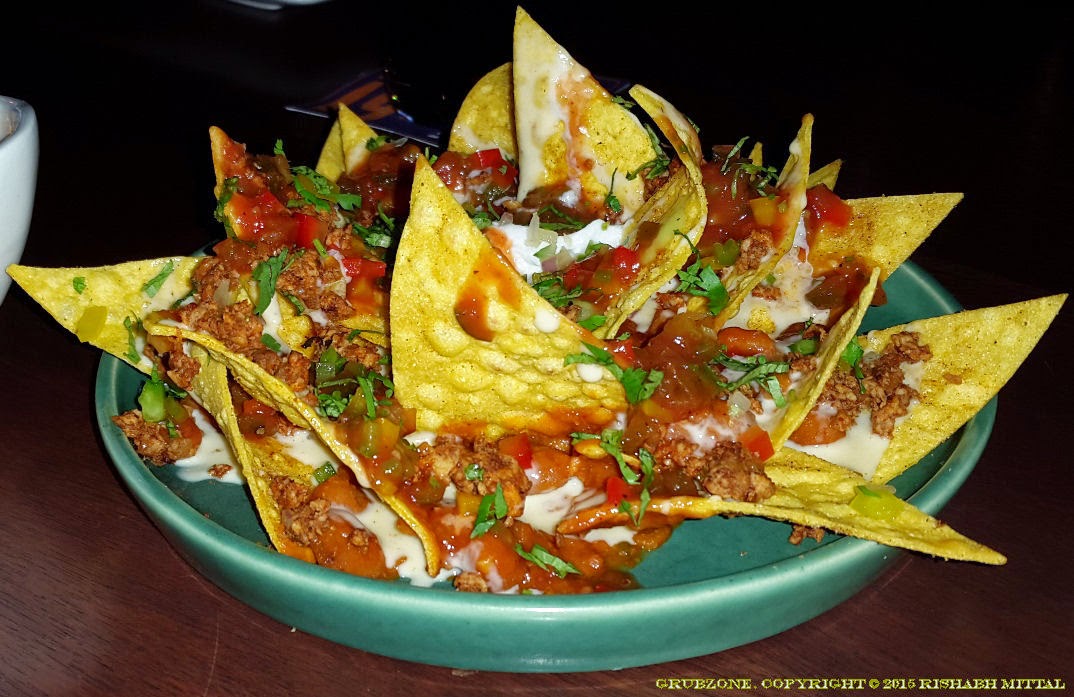 Harry's serves quality finger food and expect vast diversity in that as well. We tried a lot of different things, so this will be one colorful post.
Our Evening started with Muchos Nachos Con Carne, which to be fair tasted well but had Indian influences. The balance of chicken, veggies and spices was good and the nachos weren't soggy. 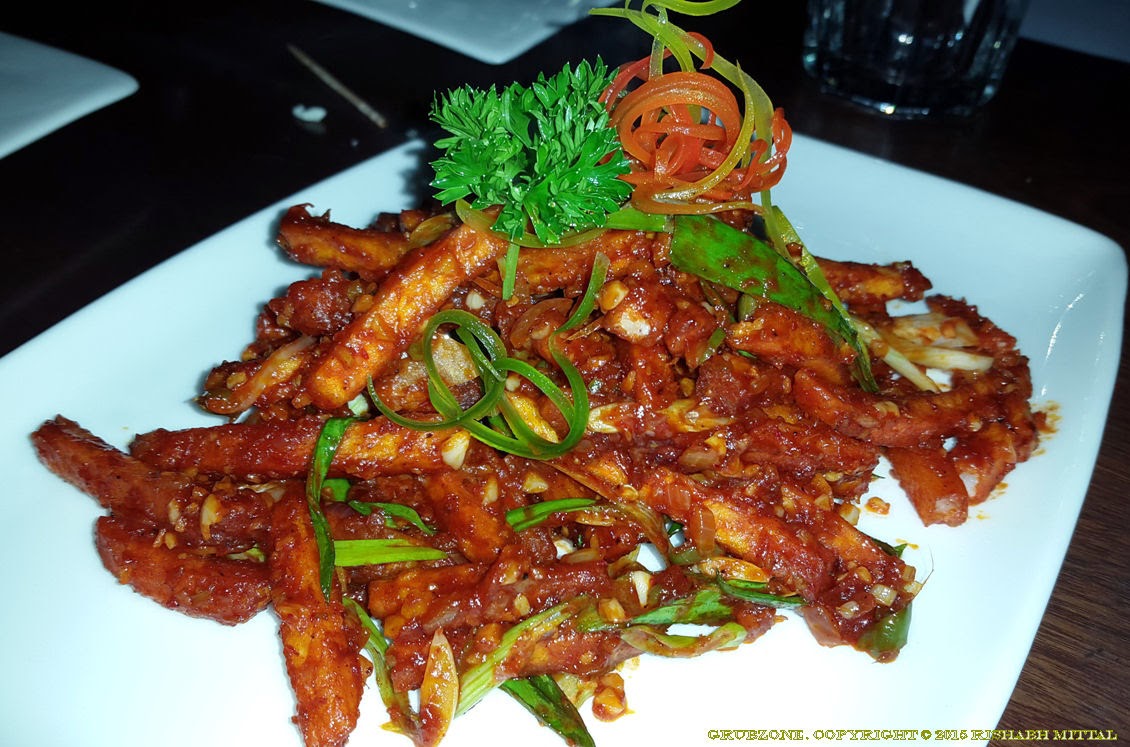 Crispy Chilli Potatoes was one of the stars of the night. These were made with a mix of potato crisps wrapped in chilli and soy.  Tangy, addictive and full of flavor. No one can eat just one...plate. Goes well with any drink.

Captain : Tangy Matey! I could eat this all night.

Crewmate : Better leave some space for the rest of the grub Cappy.

Captain : I am quite sure that four plates of this wont hurt my appetite that much. 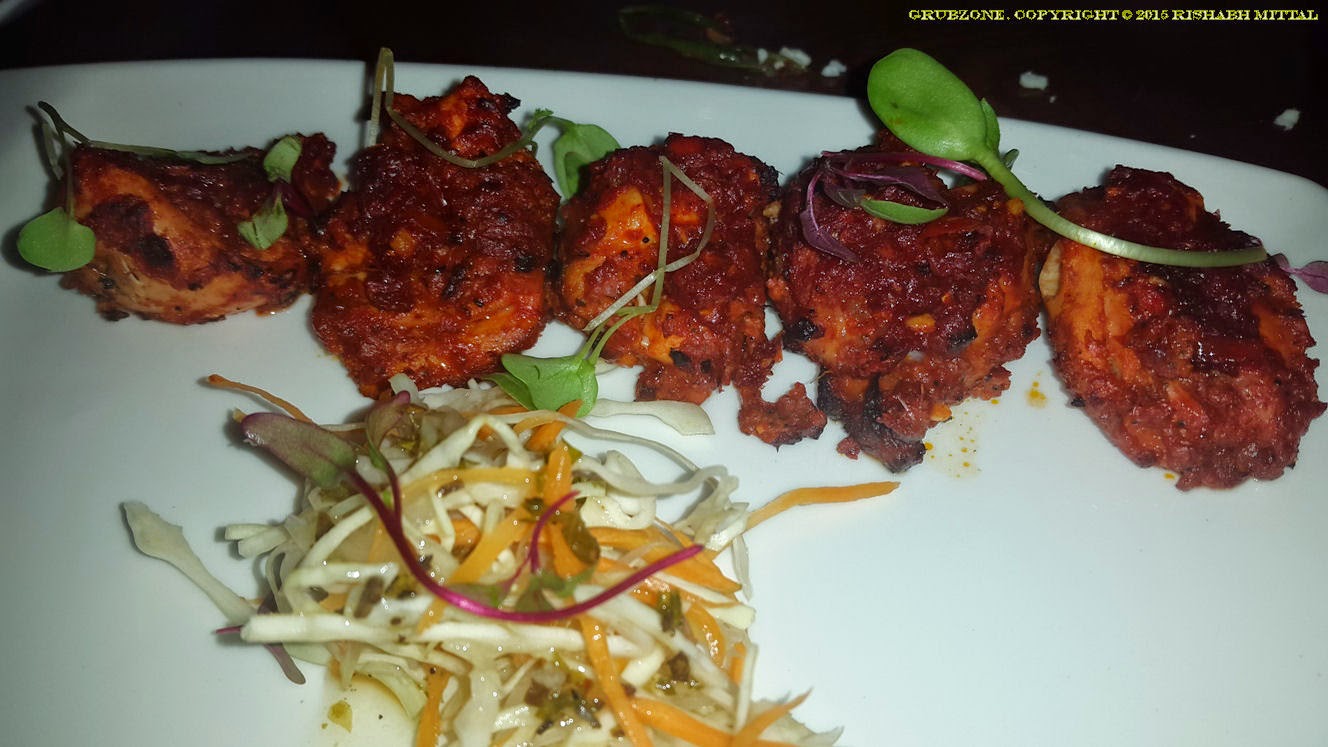 Sichuan Barbeque Chicken was charcoal grilled chicken loaded with spice. While the flavor was great, the extra addition of paprika flakes made it a tad bit too spicy for me. 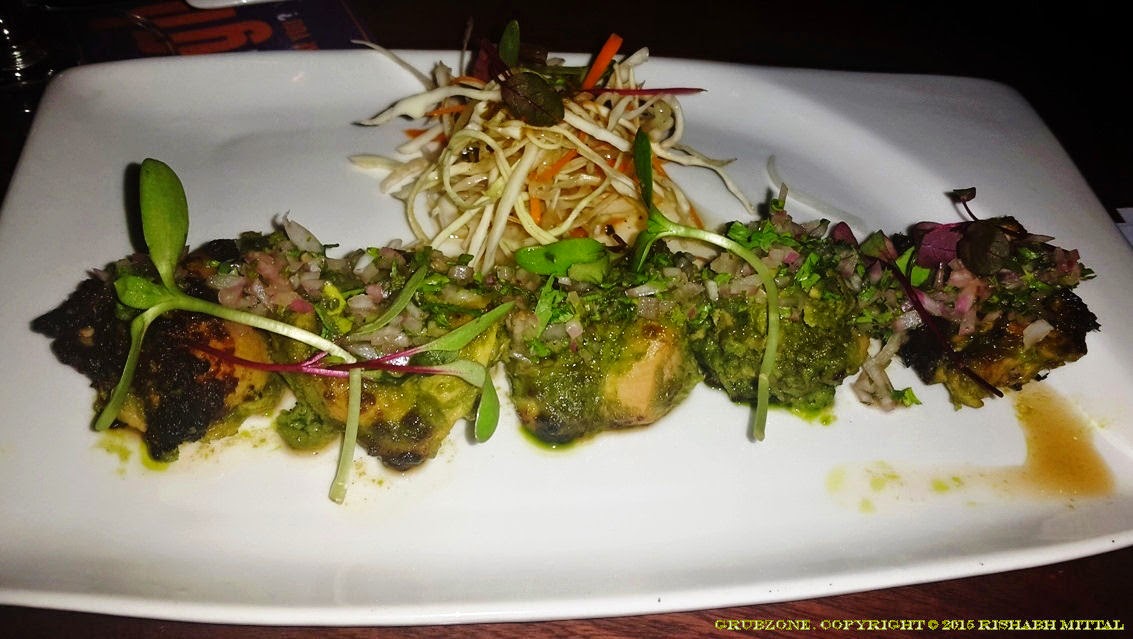 Chimichurri Chicken is an Argentine Chicken dish which is made of grilled chicken. It is then wrapped with Chimichurri sauce. And finally rubbed with extra Coriander and Parsley. This was my first time with this exotic dish from across the oceans. It certainly had a flavor that I had never tasted before. It was aromatic and mystifying. The food universe is vast indeed.

Captain : How much do we know about Argentina lad? 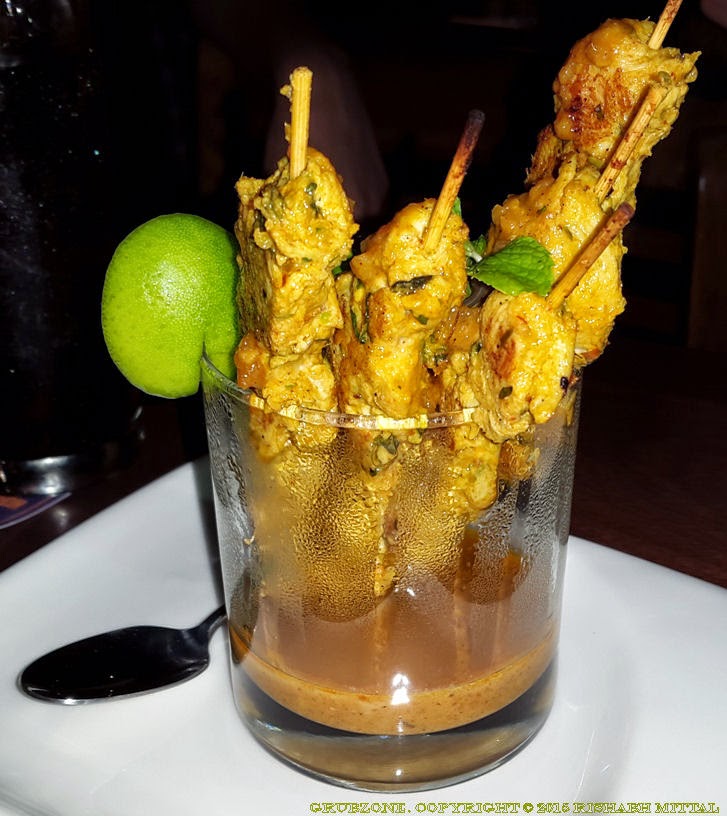 Spicy Chicken Supreme Satay is the ideal Satay as its meant to be. These Big lumpy tender chunks of meat on a skewer were thoroughly satisfying. Many mainstream restaurants in India serve flattened and leathery preparations in the name of Satay. It was pleasing to finally find a place which knows what Satay truly is. The sauces and spices were in the right amount.

Crewmate : Captain, where are the Satay sticks?

Captain : Here lad, I saved you one.

Crewmate : That's mighty generous of you Cappy. What about the rest? 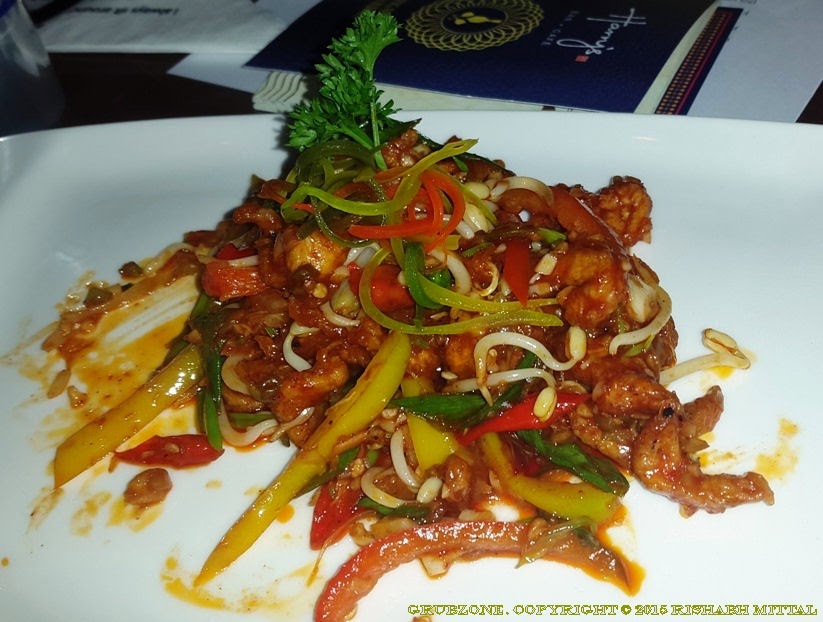 Crispy Chicken was a colorful dish with tender juicy chicken pieces. The color-taste diversity was aided with bell peppers, shallots, sprouts and chilli. The colors and flavors came in well resulting in a dish that was pleasing both to the eye and the tongue. The Fisherman's basket was an assortment of Calamari and prawns wrapped in a crispy batter. These crunchy snacks were served with Remoulade sauce. Again addicting and go well with the drinks. 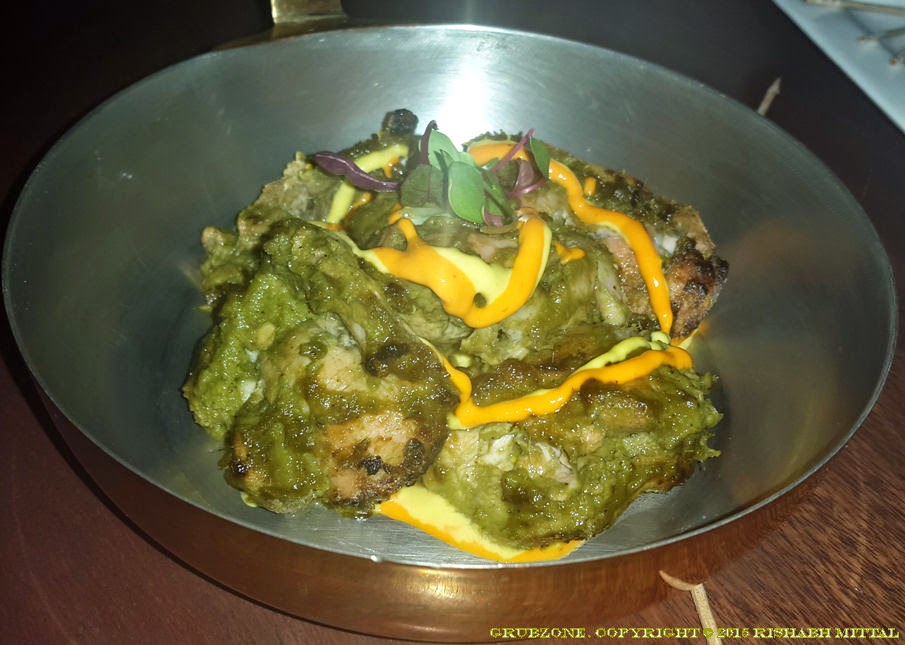 Jamaican Spiced Jerk Chicken was another new for me. This was wrapped in Jerk spice which is usually hot and flavored with Thyme. The minty pleasant flavor of Thyme dominated the item. The chicken was tender and succulent. The plating was top notch as well.

Crewmate : I wonder if we will find this in the Caribbean?

Captain : Yes and because all sailors must mention the Caribbean at some point of their journey. 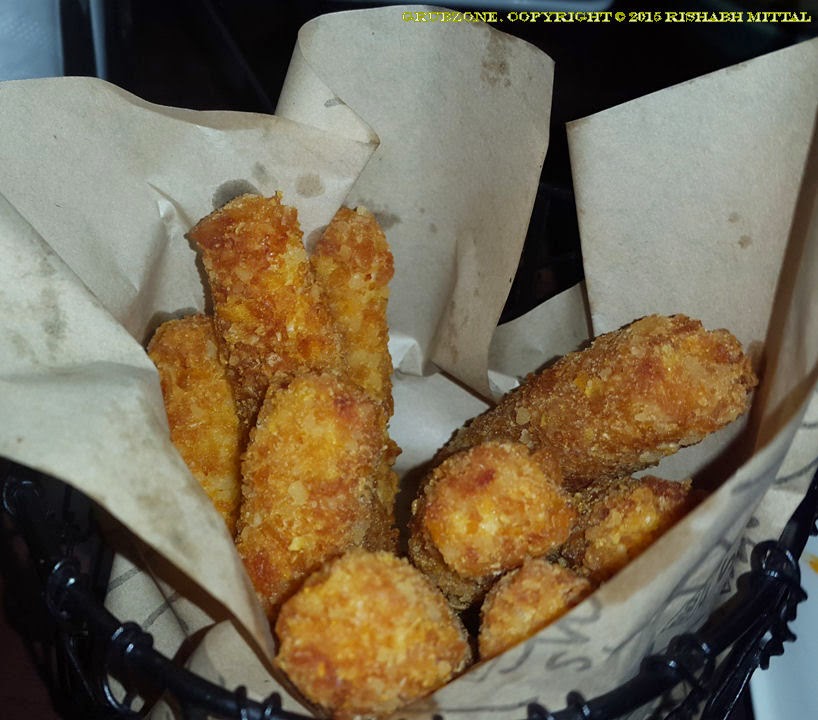 Paneer Fingers was a vegetarian take on the classic Fish fingers. This was a very ordinary item and was bland on its own. Thankfully, the provided dip helped provide taste. 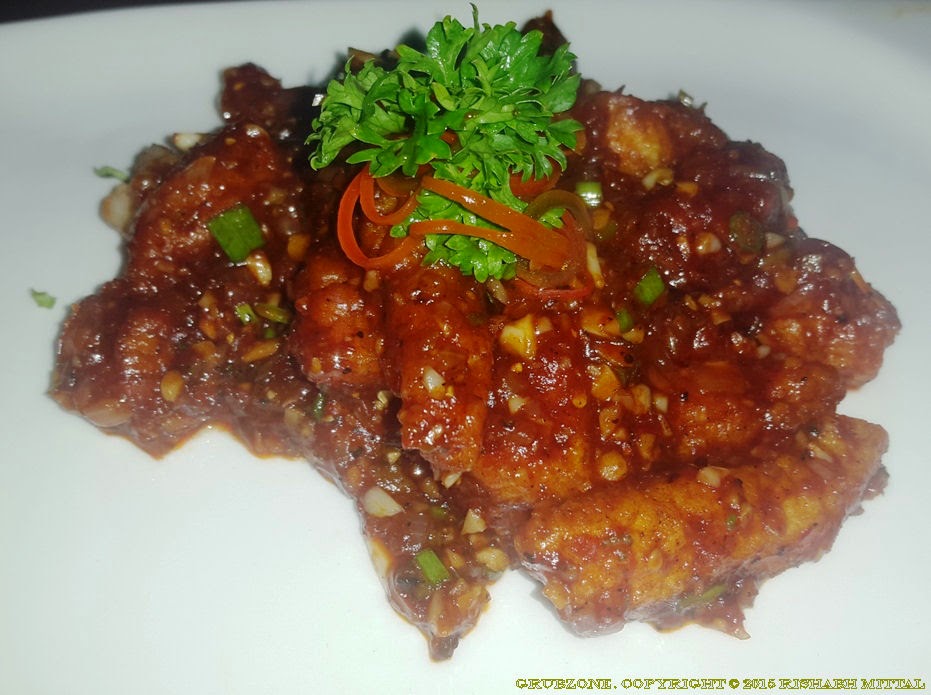 Pattaya Beach Fish Goujons was a spicy and flavorsome preparation of Basa with garlic and Soy. Though the overuse of Basa in Mumbai eateries has been a troublesome thing for me, the Basa here was cooked to perfection and complimented well with the sauces. This is one of the few Basa preparations that I have come to love. It was so good that I would have been happy to have ONLY THIS all evening. Yes, that good. 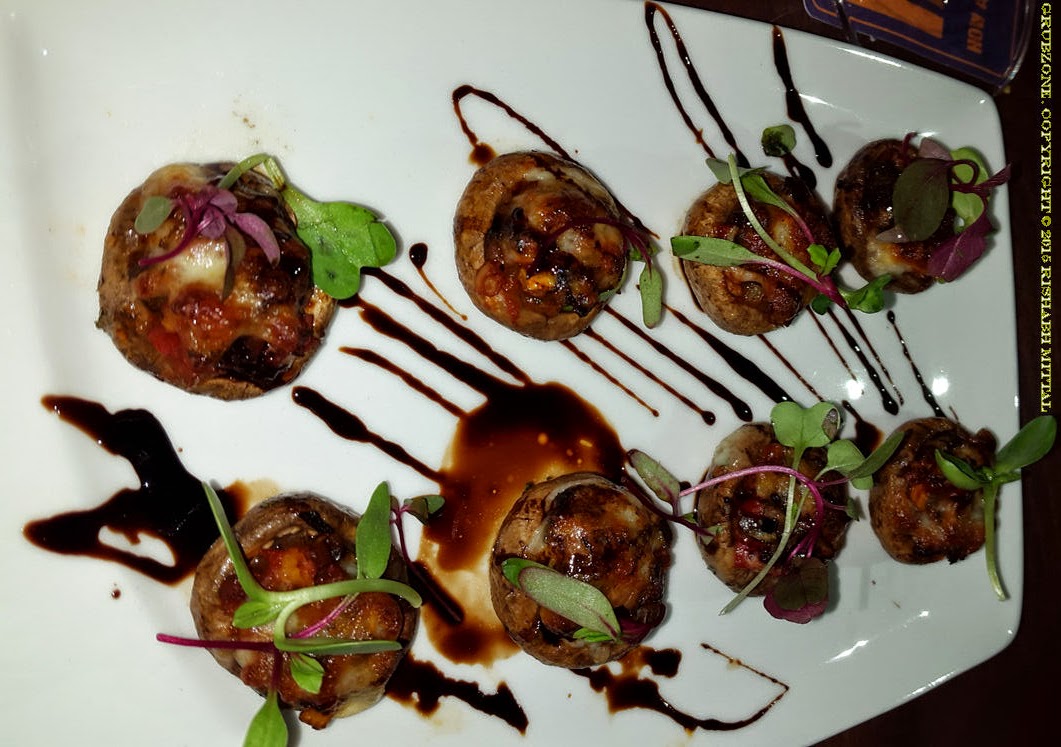 Ratatouille stuffed mushroom caps - Long before the movie popularized the word, it always stood for Ratatouille Niçoise. It is one of the few vegetarian dishes found in the west and a popular French delicacy. Harry's converted it to a Finger food variant by stuffing the dish inside Mushroom caps. Although I doubt that it would be an exact replica of the French Delicacy, it was certainly a good dish and my vegetarian friends went through it like Pacman on power pills.

Crewmate : Did you know that the word Ratatouille wasn't invented by that movie?

Captain : Of course not, the movie was based on a real life story right? 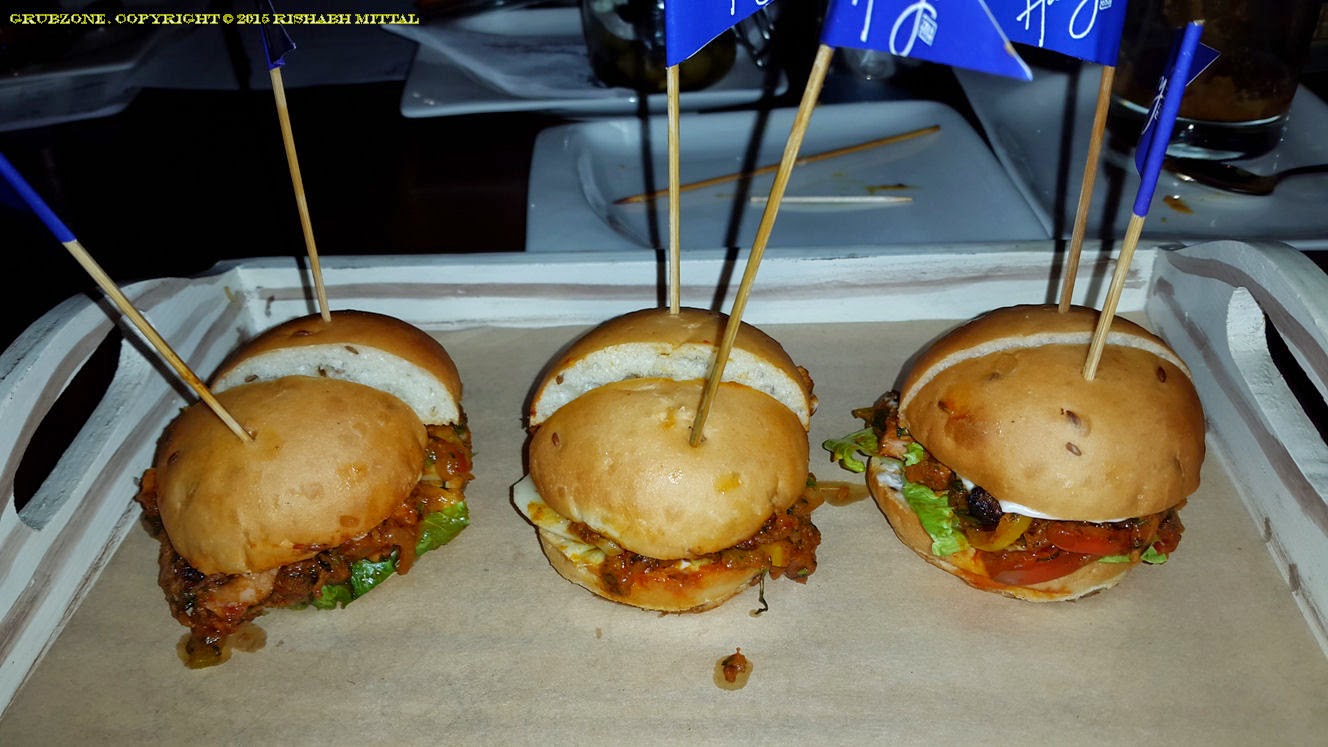 Spicy Potato and Bean Sliders were a tad bit better than their chicken counterparts. The flavor reminded me of home cooked Sukhe Aloo. It even had cumin inside. As I am not too fond of Sukhe Aloo, the flavor did not please me much. However, my vegetarian friend on the other side of the table gobbled these up pretty fast.

Singaporean Chicken Lollipops were tasty and juicy morsels wrapped with Sichuan Garlic sauce,sprinkled with Lemongrass and enhanced with Galangal. These were some of the best Chicken lollipops that I have ever had. The meat easily came off the bone and there was quite a lot of it on each Lollipop. It had an appetizing aroma and a fulfilling taste. A self sustaining and wonderful combination. Carnivores absolutely must go for this. 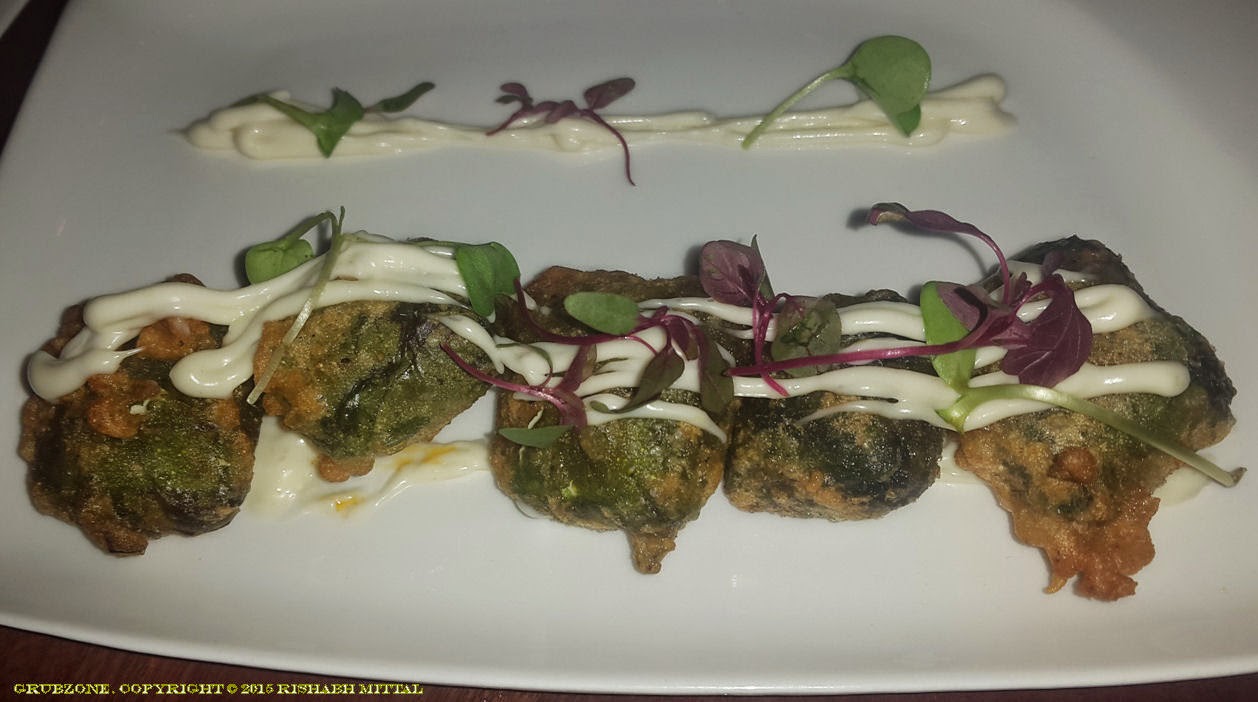 Wasabi Cottage Cheese cubes or Wasabi Paneer was a savory preparation of Paneer, Spinach and Wasabi. While I did enjoy this dish, I felt that either the Wasabi was too less or absent since my taste buds found no trace of the typical Wasabi zing. It was more spinachy, if there is such a word. 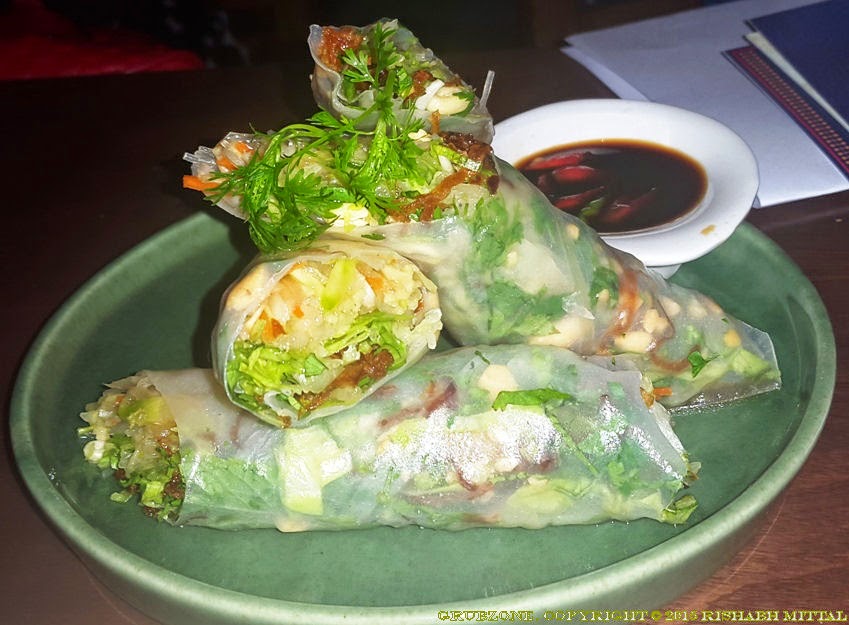 Vietnamese Spring Rolls were visibly pleasing and transparent Spring rolls. However, the flavor of this item was too flat and it was quite soggy. It was perhaps the only dish that I found myself disliking completely in my Harry's experience.

Fondue Stuffed Mushroom was visibly similar to the Ratatouille. However, it had cheddar cheese stuffed in mushroom caps and was laced with spring onion sauce and paprika. The flavor was very ordinary for this one. It was lacking the zest that it was supposed to have and the flavor was largely overpowered by the sauces. 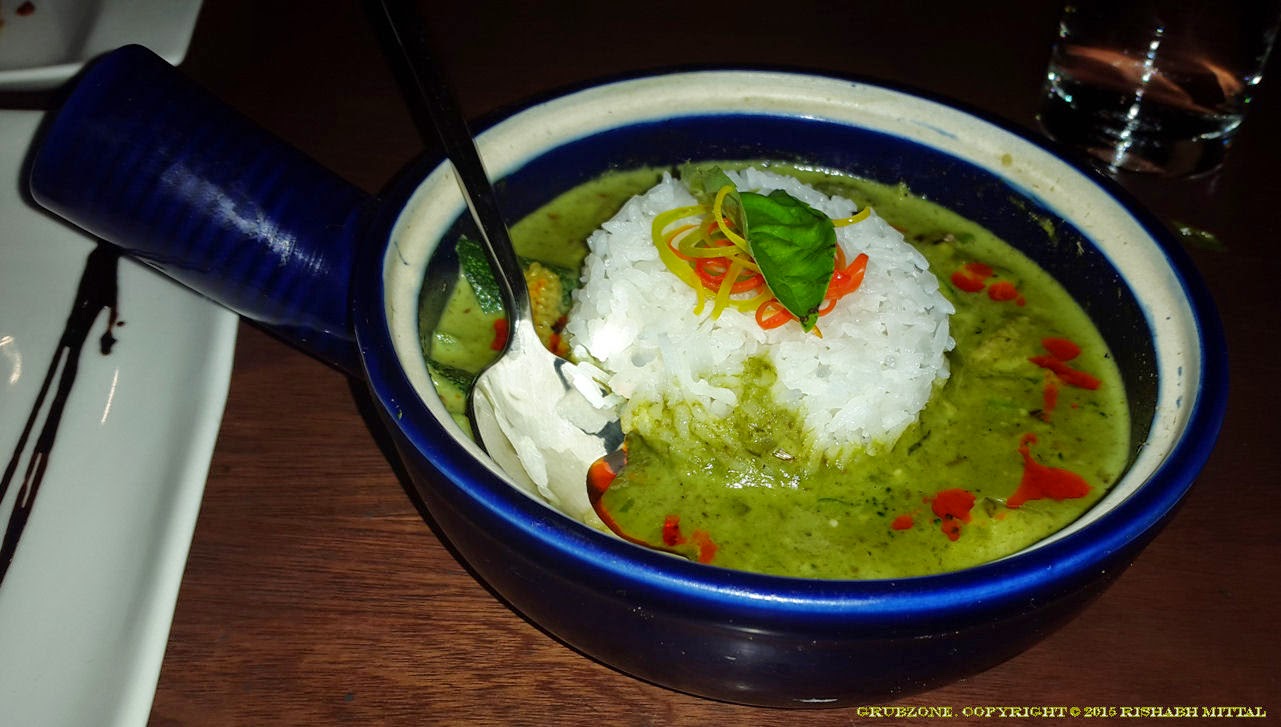 Although, Harry's does have quite a few mains. Its principal serving is the finger food and drinks. Nonetheless, our group decided to try Thai Green Curry.

The curry looked beautiful to the eye and it tasted equally well. This was the vegetarian variant and as a carnivore I found it pretty good. Sadly, I was full and could not relish it more but that's definitely a thing to do for my next Harry's trip. 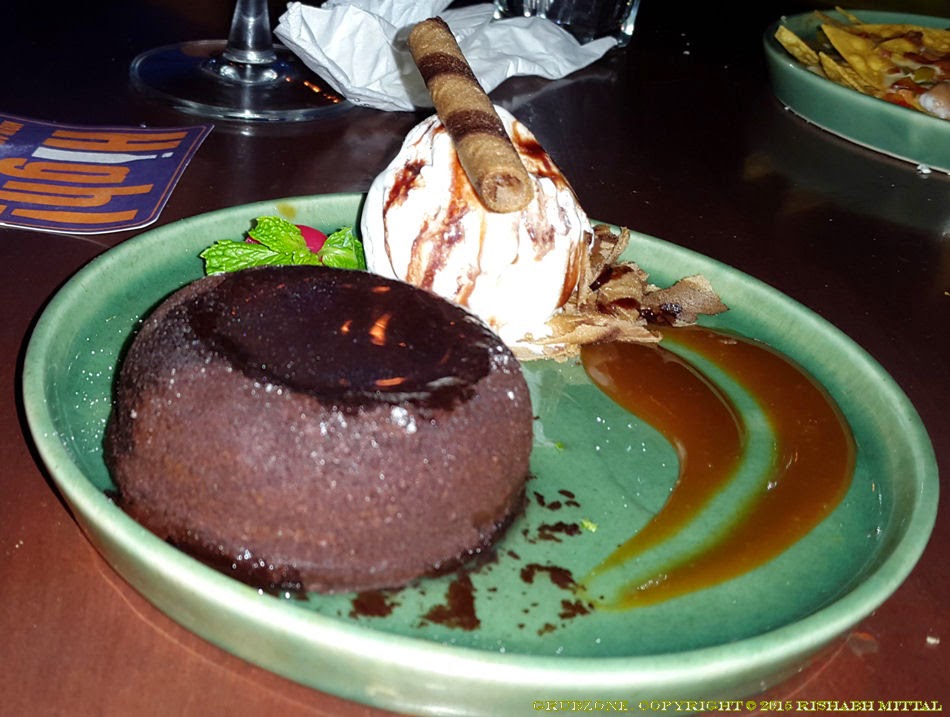 The Dessert that marked the end of the grub session was the Drunken Volcano Cake. Harry's doesn't have a wide diversity in desserts so that is definitely a department they need to work on. However coming back to the Volcano, this was the real deal. It was served in flames literally. My picture does show a few flames but I missed the exact moment when it was aflame in a flamboyant style. A real cool dessert that was served in flames. Pardon me for the bad Oxymoron.

It had a sweet rich chocolaty flavor. And as is tradition with such desserts - one has to have the Cake, the choco lava within and the gelato in one bite. Only then shall the circle be complete and you will taste the real dessert. This Dessert was one of the most memorable food experiences that I have experienced.


Captain : If we sail around the Chocolate lava and through the caramel straits, we will end up at the Gelato mountain.

Crewmate : You just translated Navigation into food language. Are you well Captain?

Captain : And then we climb the mountain and reach the wafer straw peak.

The service at Harry's was excellent and our server Dilip was balancing things pretty well. We did keep him busy between serving and explaining the dishes. The service appeared great at all other tables in a crowded pub.

Since this was a meal on the house, I really cannot comment on the pricing. However, I will go by the menu for objectivity's sake. The pricing tends to be slightly on the higher side but the food and the pub experience are worth the money. Harry's provided a great experience and it was leagues better than what I have experienced in many other pubs and lounges.

To sum it up, Harry's mostly had positives. The few negatives being the extreme loud music coupled with people cheering IPL becoming a bit of a conversation killer and the lack of a dessert diversity.

"All right lads, the night is young and we are full. Set out sail and sing down the grog. Until next time."


-I was invited as part of a Food Bloggers Association of India Meetup-
Posted by Rishabh Mittal at 2:15 am