There was water everywhere but there. The lookout suggested that me destination was quite away from the lake but was somehow still named lakeside. "Oh well", I said, "What's in a name?" I ordered the crew to drop the anchor lest we risk running ashore. Walking quite a bit on the land, I spotted a fellow Captain who waved at me. Behind him stood our current destination, Mini Punjab's Lake Side. 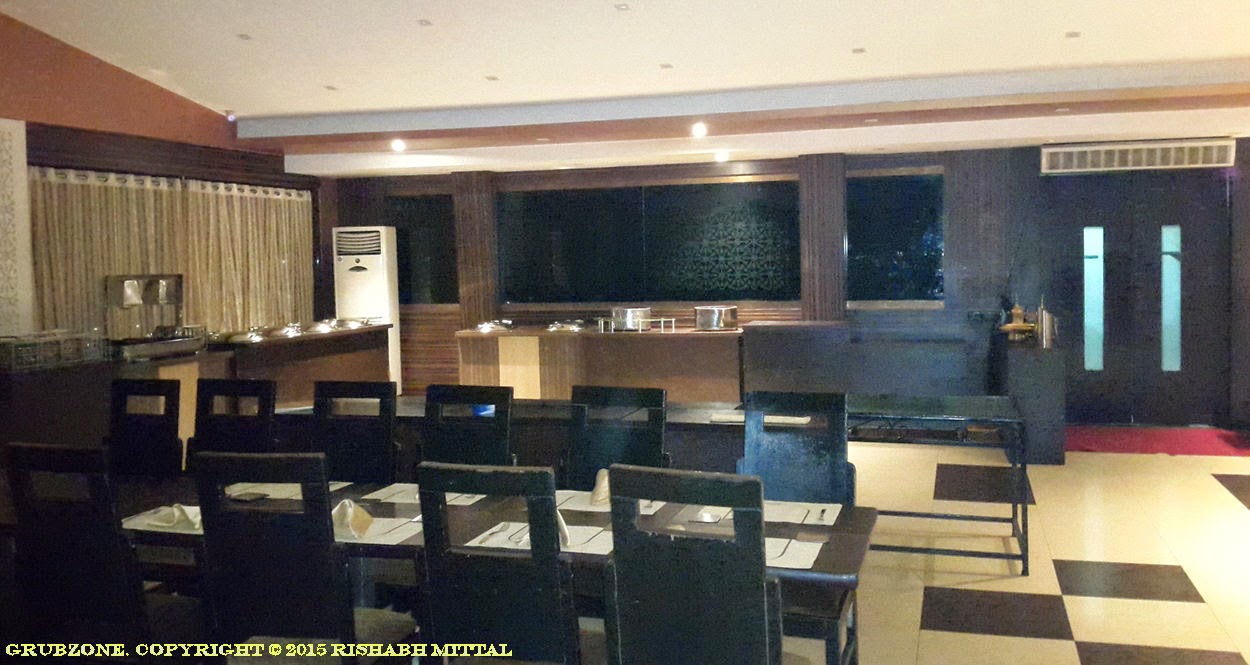 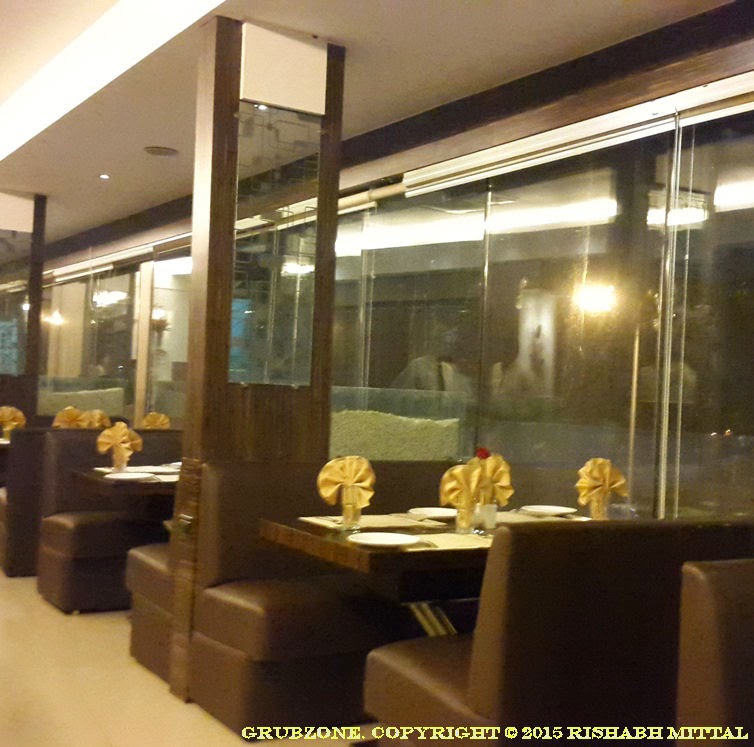 Mini Punjab intimidates most diners with its sheer size - Two indoor floors of casual dining halls and a terrace based roof top restaurant too. And to add to all of it, it has been around for several years. This goes on to show that it has a steady and a large clientele. What the food is and how it tastes however is a very personal matter for everyone including myself. Despite the decent ambiance and its long track record, I found the food quite mediocre. While the starters were great, the mains were not very satisfying.

The ambiance appeared fairly spartan with a lot of tables appearing in a communal fashion in the main dining hall. The place is known for its buffets so it did have the appearance of a banquet hall or a place where mass meal parties are conducted. We were thankfully not seated here and instead directed to a side structure segregated from the main restaurant. This looked like a narrow passage with a much more comfortable ambiance. The glass windows overlooked the busy road and not the lake. The restaurant's name is sadly a misnomer. It could very well do as just Mini Punjab.

This was a meet of the epicurean sort. I met a few food writers and we chatted over dinner. Due to the presence of friends and friendly strangers over the table, my experience was ultimately a good one. But the food had a very little part to play in it. 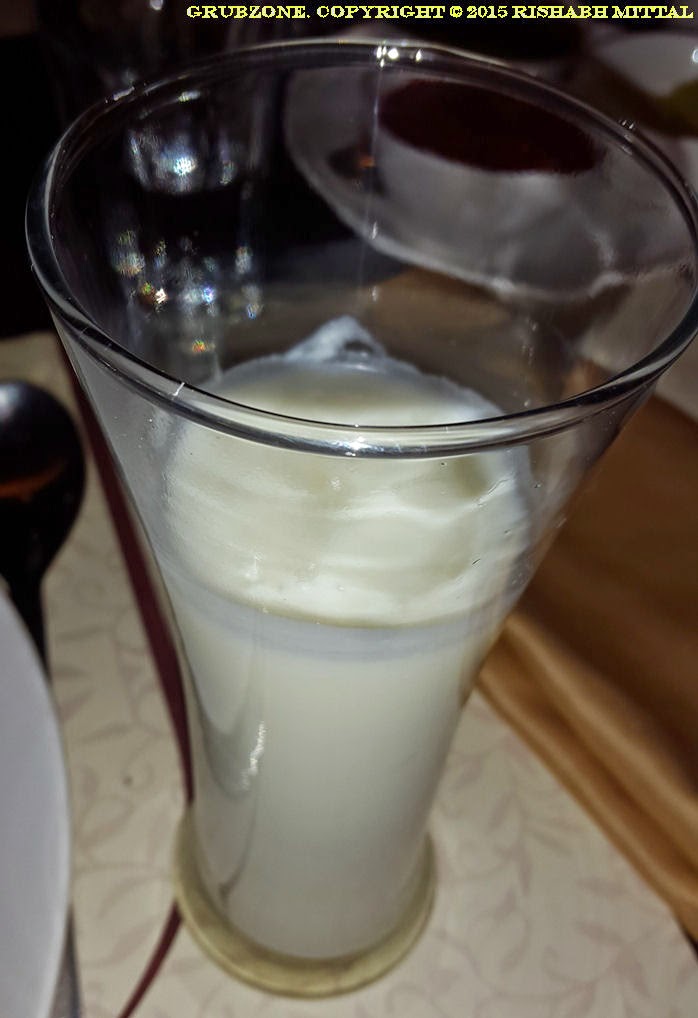 The evening tale began with a Lassi. It was served in a very unpunjabi glass so to say but the beverage itself was quite good. The Lassi was thick and creamy. The taste was sweet with hints of a citric sourness. It was not watery and was better than most Lassis that I have had.

Captain : This is quite creamy. Make my heart all screamy.

Crewmate : It also made you older.

Crewmate : You got a Lassi mustache on you Captain. 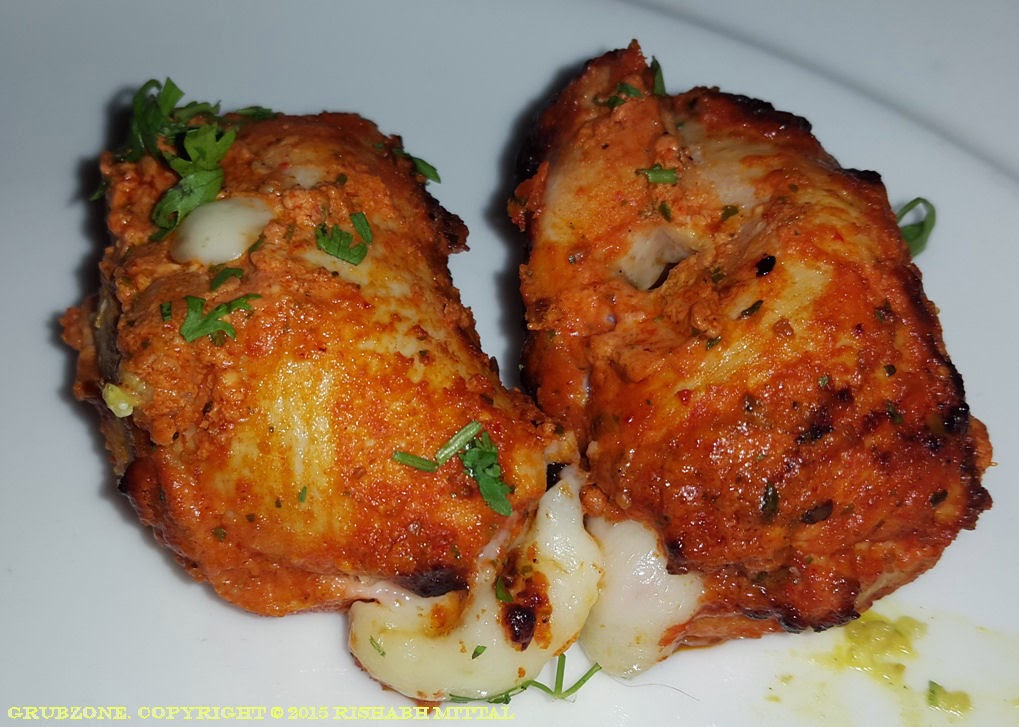 Chicken Supreme Kebabs go on to show that creativity is always rewarding. These were made out of barbecued chicken and the crevices were filled with liquid gooey cheese. One bite and one could trigger an avalanche of liquid cheese which would ooze out of the preparation. The crust was crispy and loaded with the right amount of spices. The upper crust combined with the cheesy core was a pure bliss. Very addicting and definitely the best item of the night. This was a fusion food created by the house.

Captain: These are so tasty, that they land me in ecstasy.

Crewmate : That Rhyme is quite cheesy. 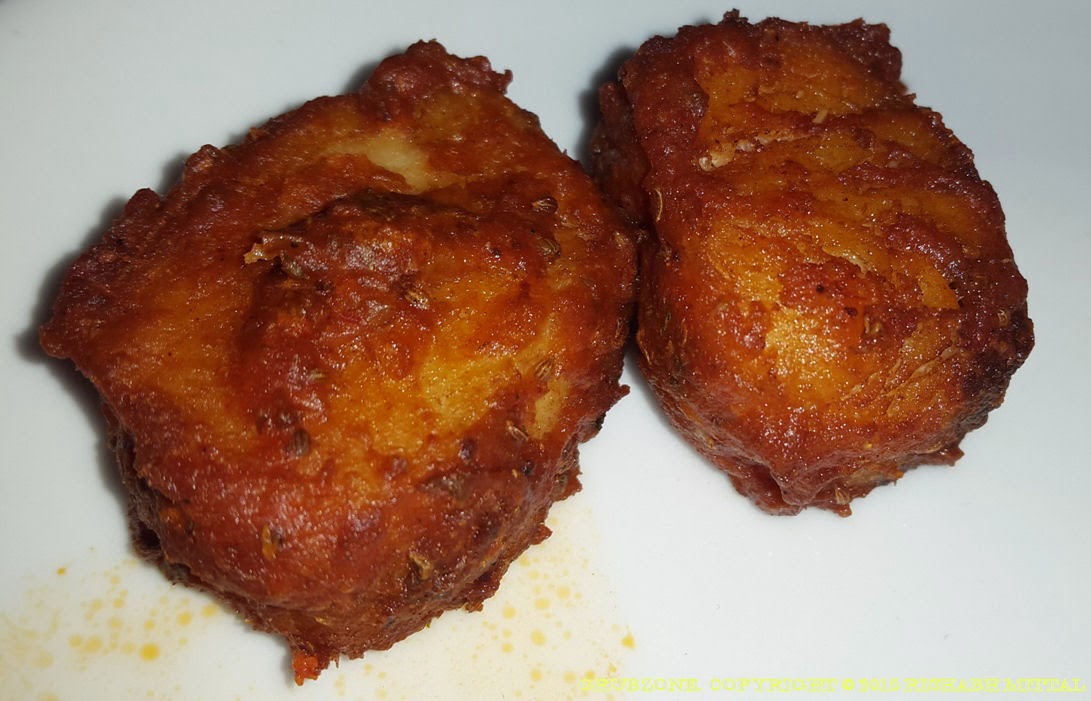 Fish Koliwada were average snacks which were made from sea fish. (Thankfully not the over used Fresh water Basa.) These were deep fried and coated with a batter. Had a great appearance with their texture. However, they felt a bit tough and leathery to me. There was very little inherent flavor and I had to use a lot of Mint Chutney to make amends. Although this appeared to be an issue with that particular platter, the next batch had softer chunks as opposed to the tough ones in the previous platter. The restaurant could very well improve on the consistency of the grub.

Captain : Finally, some sea fish. I was beginning to think that they no longer exist.

Crewmate : This preparation feels tougher than what we have had before.

Captain : Maybe the cook needs to explore the sea more. 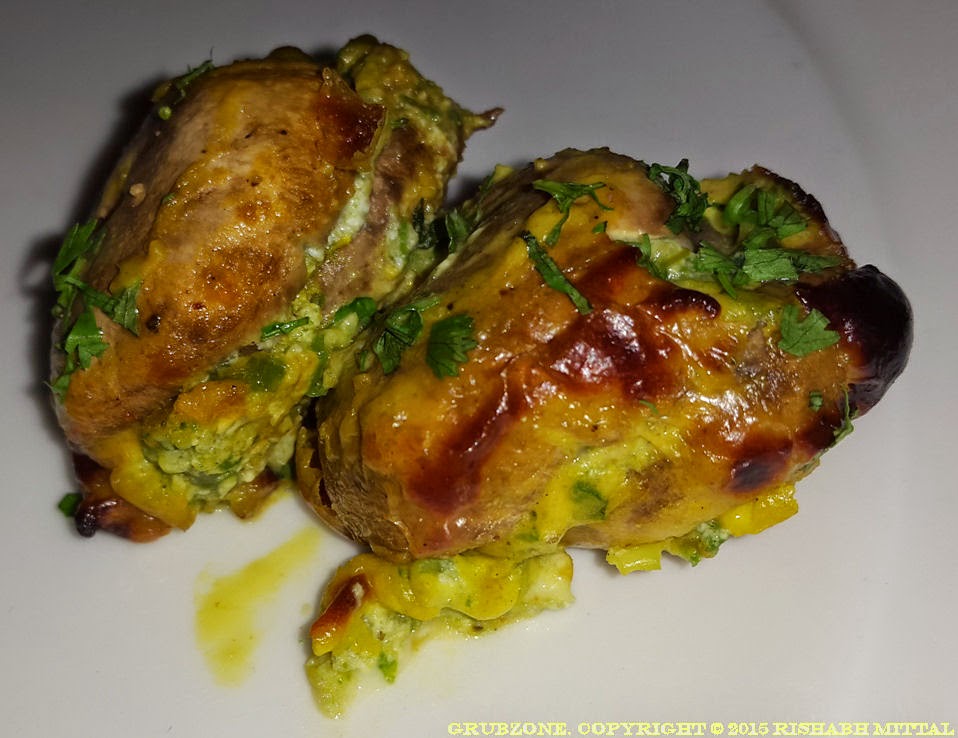 Stuffed Tandoori Mushroom - One could stuff almost anything in a mushroom cap and make something edible out of it. However, the skill in making something good out of it varies from place to place. Mini Punjab's variant was decent. These were savory, a tad bit cheesy and flavorsome. The fleshiness of the mushroom caps with the stuffing inside made it a very great dish for a carnivore eating vegetarian. 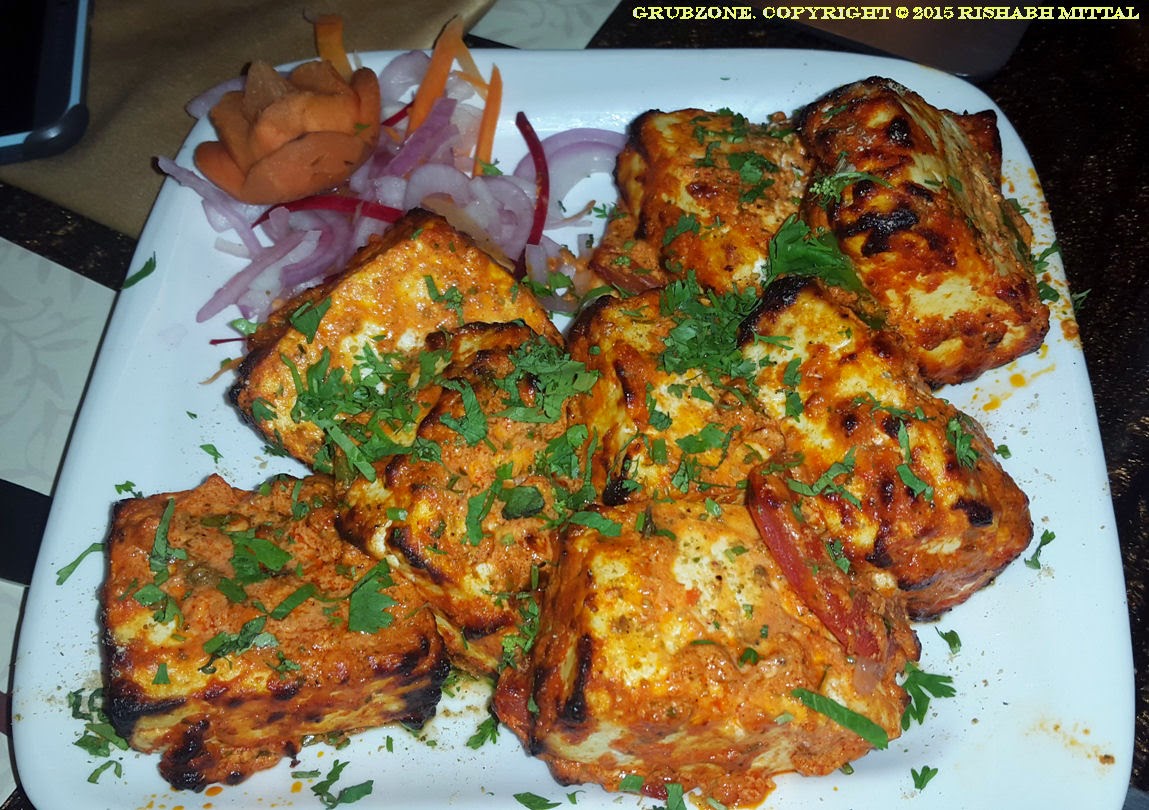 Paneer Tikka was a visibly enticing dish with a lovely aroma. Marinated in spices and grilled in a Tandoor, this was quite a tasty morsel of a starter. Though not the best by a long shot, I do feel that Mini Punjab's variant was quite good. The roasting was uniform and no part of the cottage cheese chunks was burnt or hardened in the process. This is the closest thing to a Chicken Tikka for a pure vegetarian.

While the Starters were an overall decent experience, the mains sadly failed to satiate the taste buds. 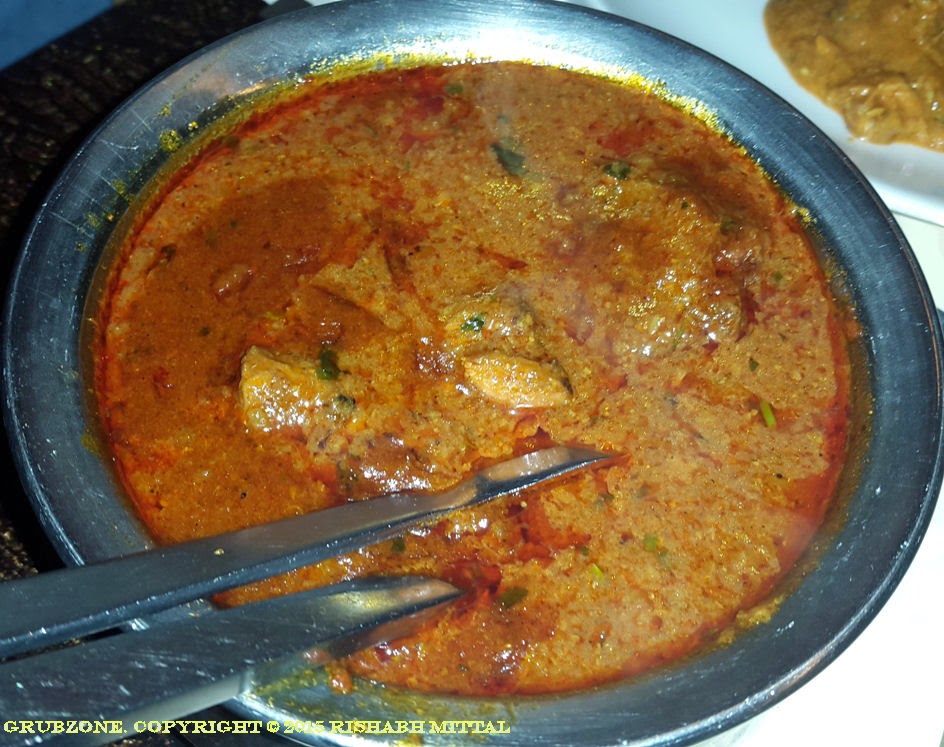 Often mistook to be a Mughlai/North Indian preparation. Rogan Josh is actually a Kashmiri Lamb dish. It was probably assimilated into Punjabi cuisine when the Sikh emperors ruled Kashmir. This dish is always a fine balance of meat, bones and flavor. While Mini Punjabs variant scored in flavor and aromas, for me it lost on bones and meat. Though my friend found it good, I found it more bone than meat on my servings. The enticing aroma and tasty meat meant very little when I had to wrestle small bits of meat off a large piece of bone. Such effort often turns off the appetite. 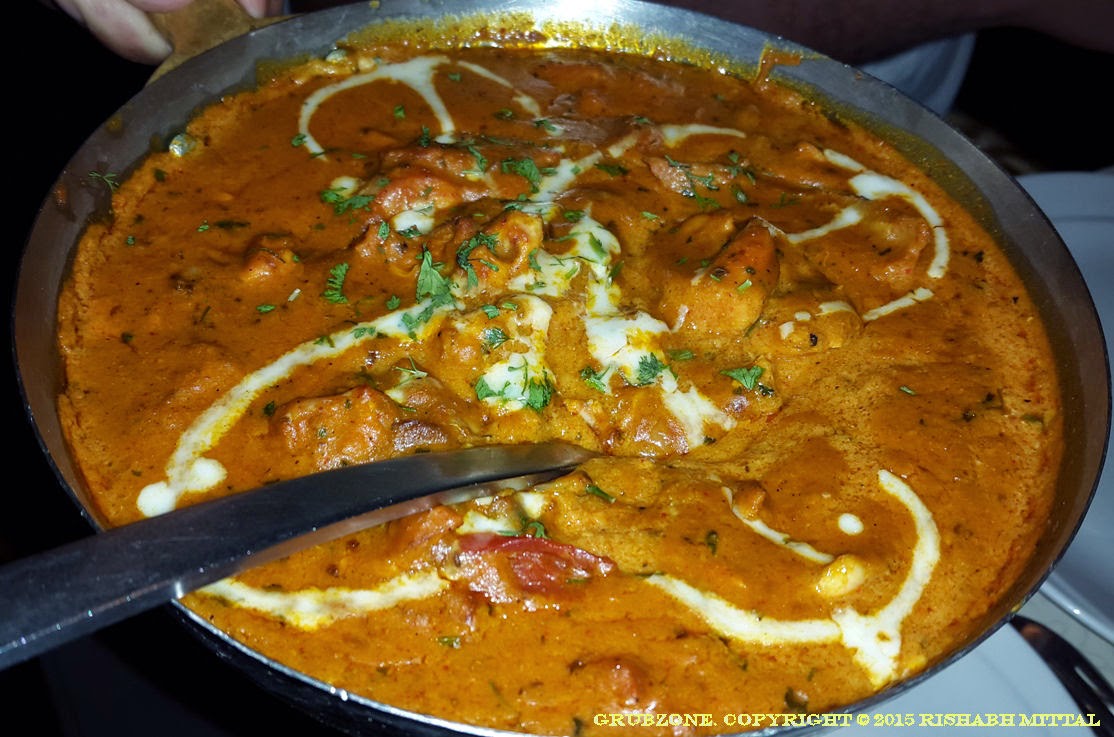 Chicken Amritsari looked visibly pleasing upon arrival. One has to give the chef points for working on excellent presentations. The taste however felt quite a bit off. It was absolutely devoid of any spices or masala. Though Chicken Amritsari does not traditionally have too many hot spices but a light flavor from hot spices is still an absolute must. While Mini Punjab's preparation was definitely North Indian, it wasn't quite the classical Chicken Amritsari. 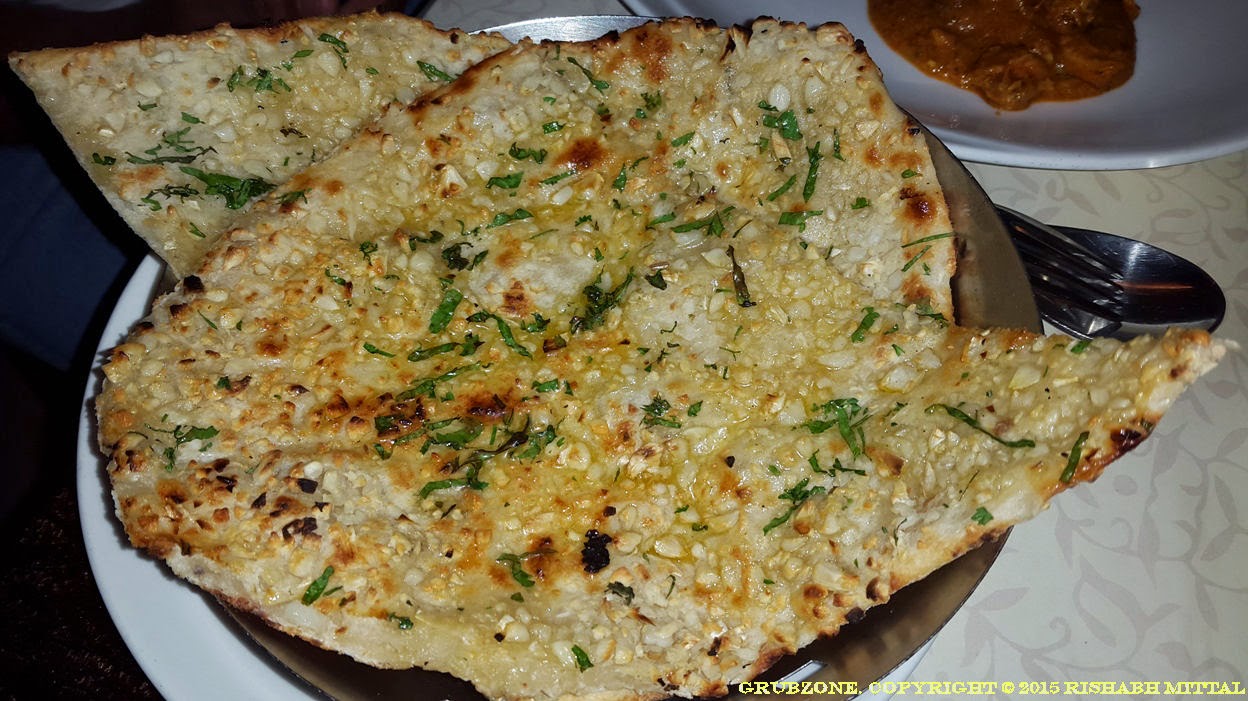 The Garlic Naan was a bit too buttery but was quite tasty nonetheless. It helped me finish my small servings of the mains. More Naan, less main.

The desserts looked colorful and nice but once again the taste was below average. 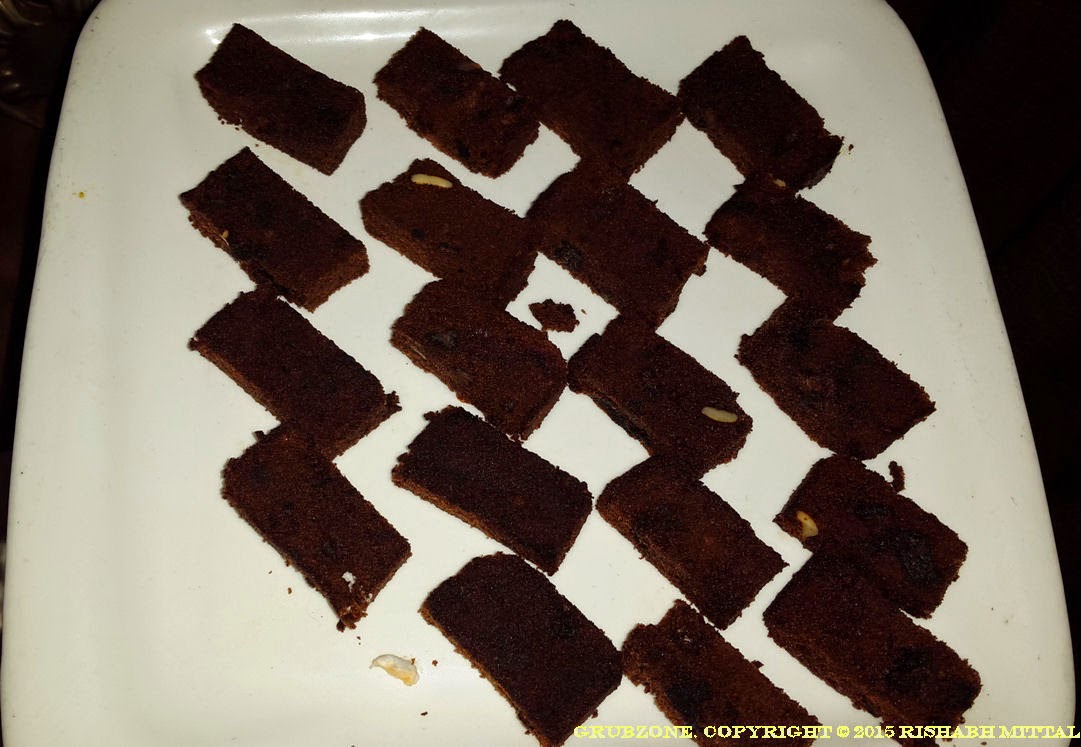 The plum cake was very ordinary and crumby. It was much similar to the cakes found in Iyengar bakeries. 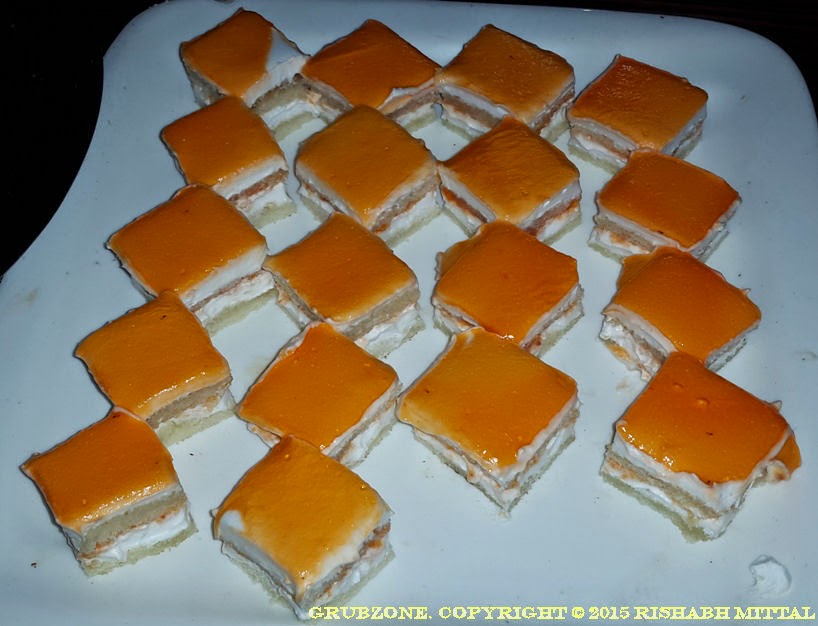 The mango pastry was a bit over sweet and despite its glazed cream and regal appearance, I found it to be my least favorite amongst the desserts. 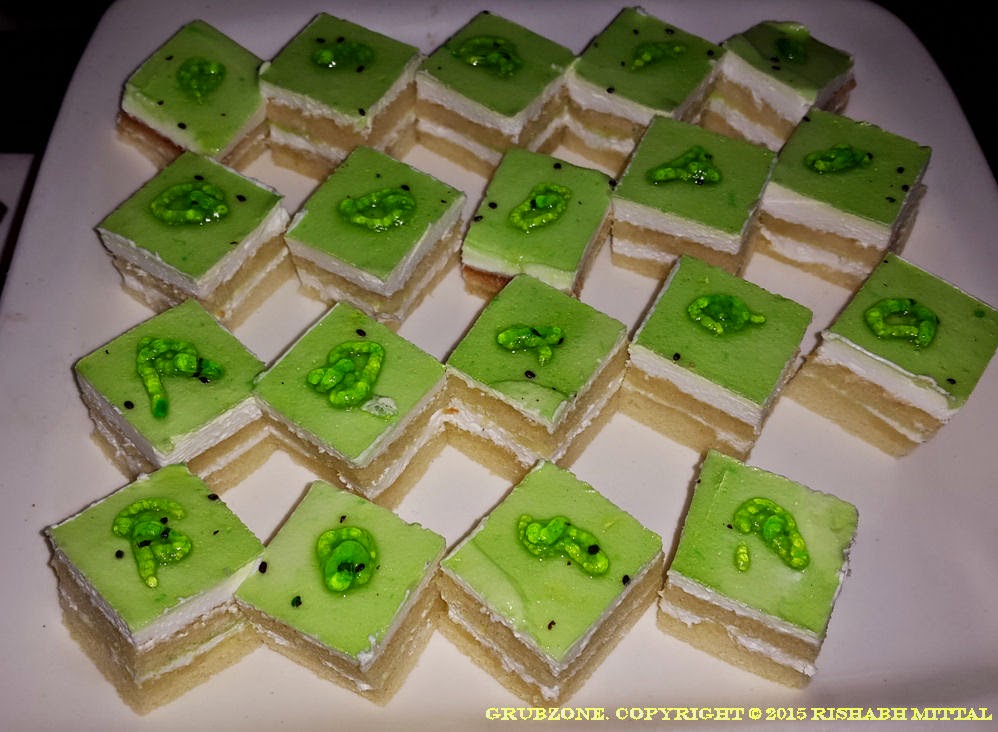 This Kiwi cream pastry looked great and tasted well. Although not as well as its appearance would suggest.

Crewmate : Funny thing food coloring be. One extra drop of green and it goes from pleasant to toothpaste green. 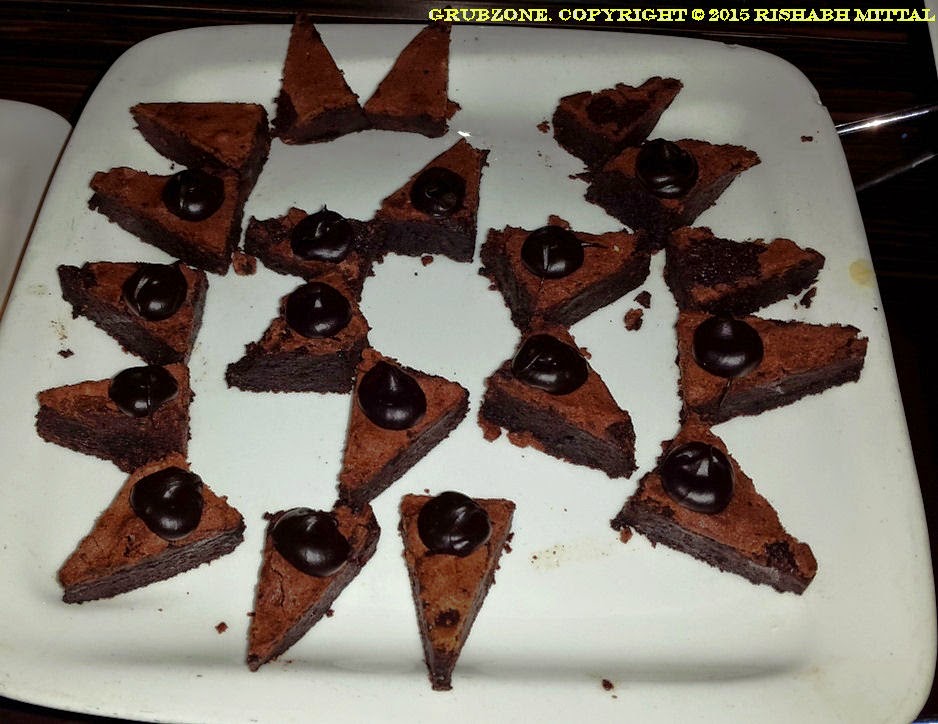 The Gooey Chocolate cake had a brownie like appearance and lacked sweetness and firmness in the core. Maybe some extra sugar from the Mango pastry could have been added here. 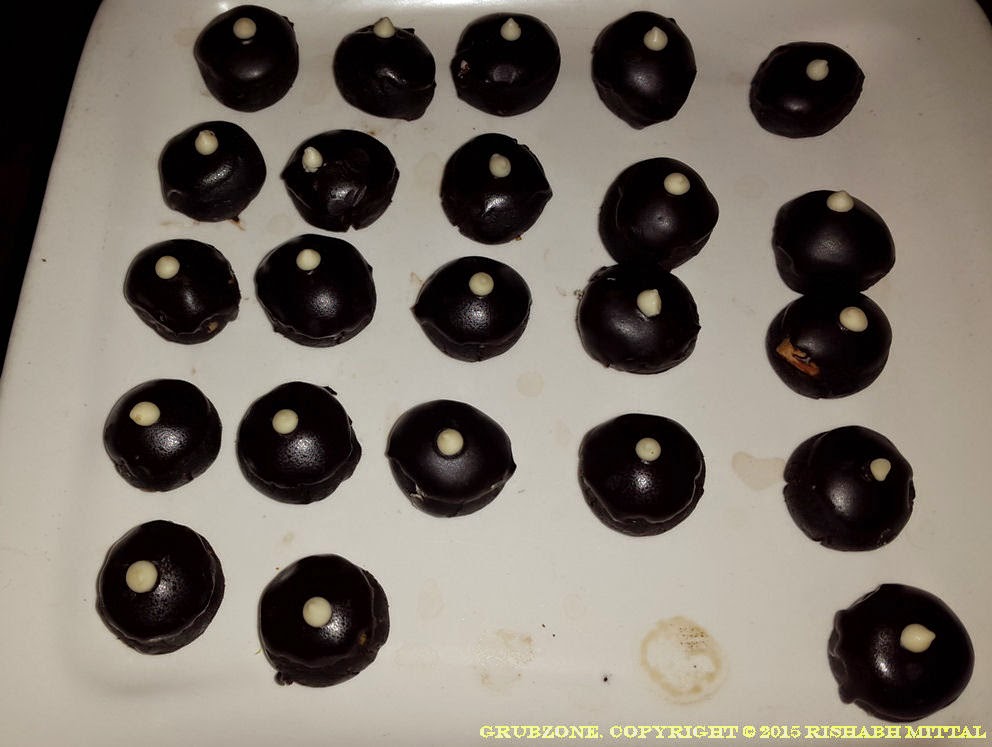 These Chocolate balls though not the best, were the only desserts that I found palatable. The sweetness was right and the chocolate core tasted authentic. They bounced well with me so to say.

The service was acceptable. Cannot say that it was stellar since the servers would often understand instructions slowly. Thankfully the Captain was smarter and sharper as he insured a decent experience.

The pricing appears to be a tad bit more than the standard North Indian places that I find all over Mumbai. But all said and done, the prices are acceptable and suit most patrons. The restaurant boasts of high clientele and thus I feel that the prices are not a problem.

To conclude, I shall say that I was somehow satisfied with the Mini Punjab experience. But for a full scaled North Indian restaurant, it certainly needs work on its mains. The desserts have a large diversity which is nice but then the flavors are very meek which is not quite nice.

"Lets find that lake before we leave lads. Then its back to sea for us."


-I was invited as part of a meet and we did not pay for the grub. Thanks go to Sanjay Punjabi and Pranesh for inviting me-
Posted by Rishabh Mittal at 5:05 am