Pizza by the Bay - Churchgate, Mumbai

The sea roared as the night set in. My ship sailed along the coast and I was glued to me looking glass. I was spying the land for a good grub zone. Then suddenly me eye caught a famous place that I had never been to. I ordered the crew to dock in nearby. Pizza has always been tis' Captain's favorite and a Pizzeria is always an easy winner among choices. As the ship came to a halt, the delectable aroma of pizza was already calling me to it. Just like a siren, who calls on lovelorn sailors in the North.

It was a chance encounter of some sorts. I was in this part of town and just came out of a Jeffery Archer book signing session. While passing Marine Drive, I faced a lot of big name restaurants that I had always wanted to go to. And there stood Pizza by the Bay. It was dinner time and I had a craving for pizza. What better chance I exclaimed as I marched in.

Pizza by the Bay has a spectacular Al-Fresco which faces the sea and the busy marine drive road. It is quite a sight to see during breakfast and serves as a nice meeting place for friends and office folk. The indoors are equally impressive. Although small in size, it has a pleasant and simple appearance. When I write simple, I mean the comfortable kind of simple. One could close their eyes and relax with their drinks. The wall of jazz as I would like to put it is a wall with many pictures of Jazz Legends. If one is really imaginative, one could close their eyes and hear them playing. Which could also be a side effect of too much wine.

Due to the constant Hunger Pang sorties in my stomach, we wasted no time in placing the order. 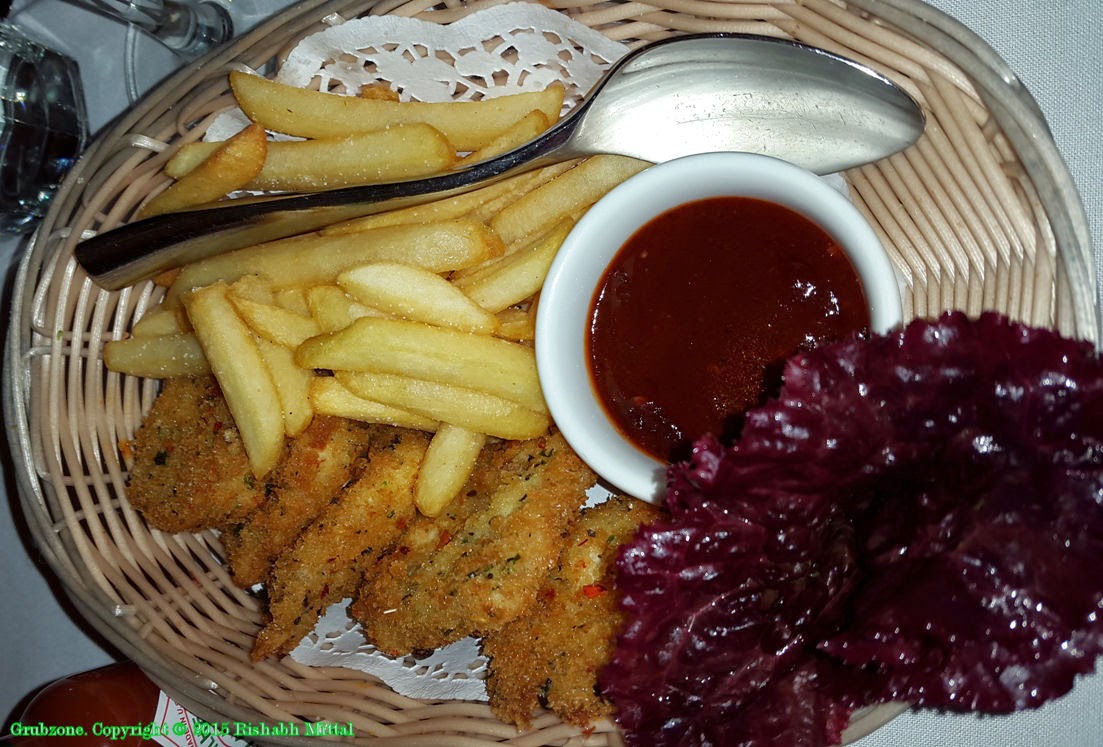 Frittelle Di Formaggio Doppio is a delicious vegetarian starter that pleases both carnivores and herbivores. It uses two kinds of cheeses - Cottage Cheese and Cheddar. These are wrapped in bread crumbs and sprinkled with Mediterranean spices. The taste is addicting and one could easily get mesmerized into Cheeseland. These Cheese fritters are some of the finest that I have ever had. These are served with a generous amount of Fries. The item wins on both plating and taste.

Captain : Oi, save some fritters for me too.

Crew mate : But I just had one Captain.

Captain : How greedy of you lad ! 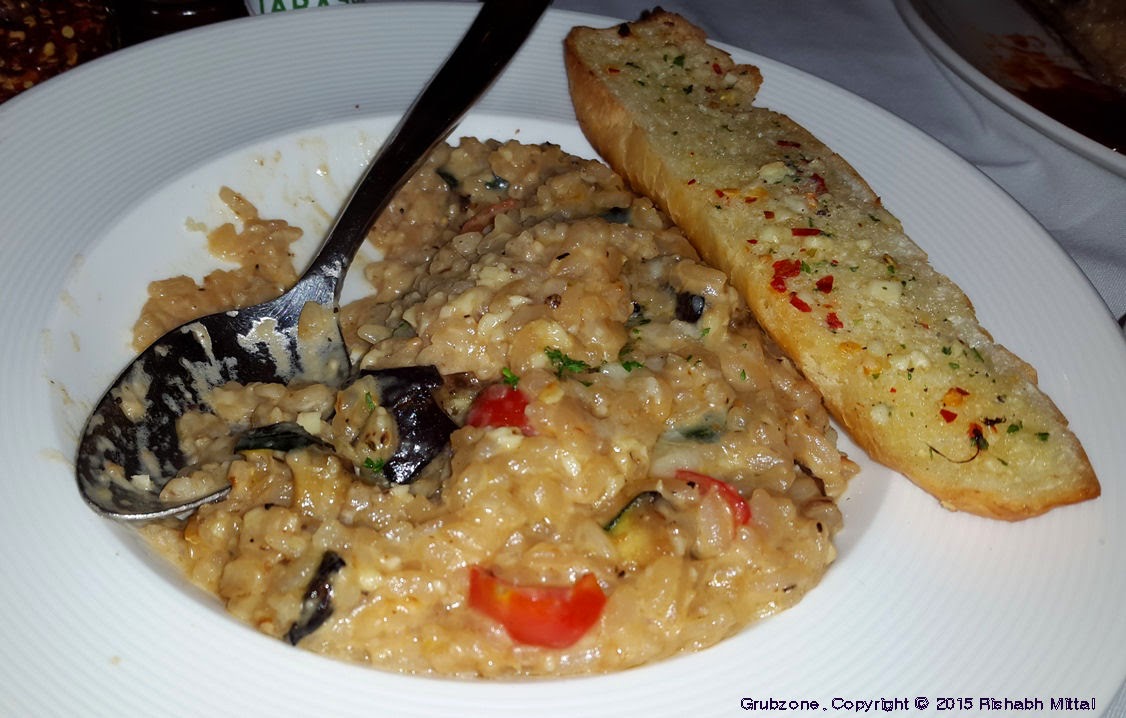 Risotto Siciliana is an atypical Risotto which mystifies you with its appearance. Despite not being served with a typical disc like shape, this is the real deal. Thankfully, it is made with genuine Arborio Rice and not long grained Indian rice varieties. A real Risotto must always use Arborio. The smell and flavor both suggest a strong presence of Garlic. Its cooked with butter and cheese which gives it a smooth-slippery texture. The dish also contains plum tomatoes and eggplant. Overall, a strong flavored dish. This is available in three variants - The plain one for the vegetarian types, the chicken variant and the shrimp variant.

Captain : Now this is how a good rice meal should truly taste like.

Crewmate : Maybe we can ask the ship cook to make this sometime. Pizza Mista reminds me of a famous Chicago pizza chain by the same name. But forget the name, the pizza is an excellent meat craver's pizza. It has an appearance that is reminiscent of a temperate forest in autumn. The colors are vibrant. I haven't seen a pizza plated in a prettier manner than this. The pizza gives out a distinct aroma of Ham and bacon along with the spices used in it. It is loaded with Ham, Bacon and Salami shreds. To provide balance, it has just the right amount of olives, red and yellow bell peppers. Each bite is almost an otherworldly experience. With each bite you get the meat, cheese and olives in your mouth. Its perfect. Also to add, the pizza is not too oily.

Captain : Would you look at that? Islands of meat sit on a sea of cheese. And there are nice little bell pepper bridges connecting them.

Crewmate : That was profound and cheesy in the literal sense. Ever considered being a food writer? 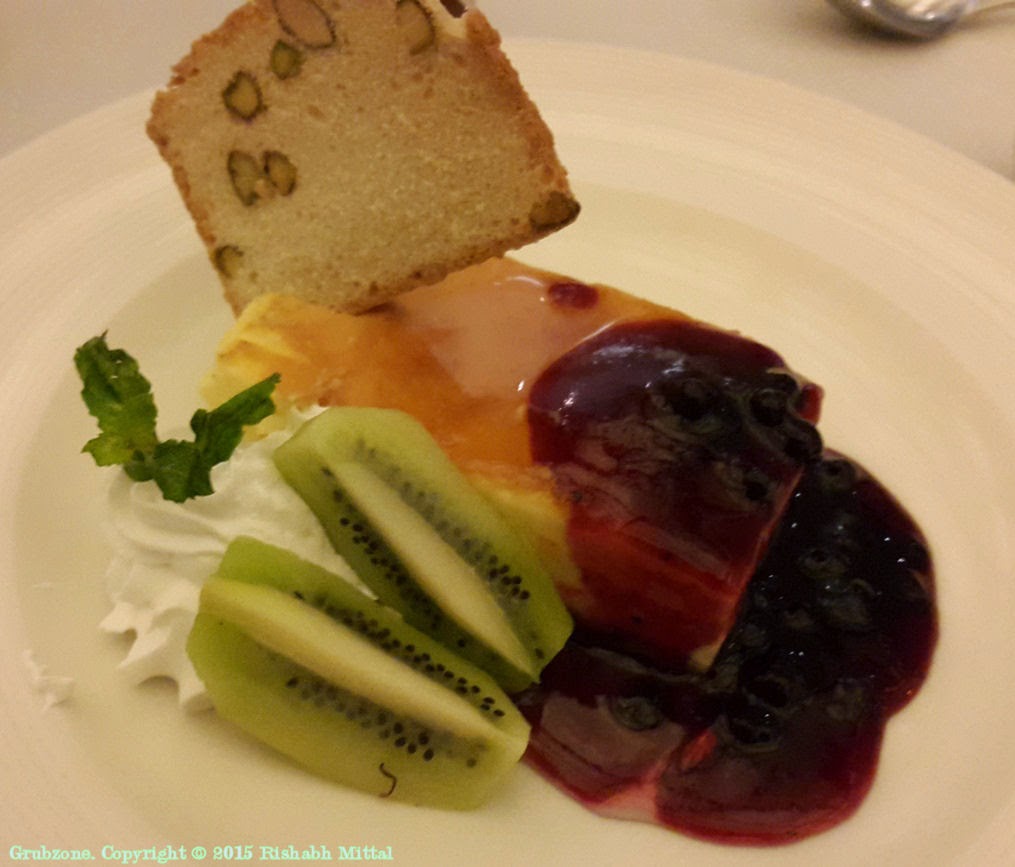 Baked Citrus Cheesecake was a regular cheesecake coated with berry compote and served with some seasonal fruits and whip cream. Though satisfactory, I will say that I have had better cheesecake.

Surprisingly, Panna Cotta was missing from the menu but that is no biggie I guess.

The Service is one of the better features of Pizza by the Bay. They are professional, polite and diligent. They did not err even once. I rarely see service equal to this, let alone better.

The pricing could be on the higher side. Although, such is expected from an eatery on this side of town. The experience is completely worth it and the fact that the restaurant has done roaring business for ages is a testament to that.

If you are in Mumbai, then a trip to Pizza by the Way is a must. For the food and for the experience.

"Back to the dark seas must we go to, on towards destinations unknown. We shalt be back someday but for now we must sail on."

Map Co-Ordinates
Pizza By the Bay