Tis' was a perfect sunny day and I was on me relaxing chair on the deck looking up at the clouds above the sea. The cries of the seagulls reminded me that despite no shores in sight, we were quite close to a coast. Without warning an innocuous piece paper flew in from nowhere and fell flat on my face. Startled, I sat upright and saw what the paper was. To me surprise, it was a restaurant flyer telling me about a new place and it invited the reader for a tasting. Not one to give up free grub, I immediately ordered the crew to set course for the nearest coast. Phoenix Market City is one of the biggest malls in India and Asia. So all trips made here feel a bit special to me. There is always something new to explore and in the past few months a lot of new restaurants have become operational over here. The place is so large that it should probably have its own pin/zip code.

Amaya was quite easy to find as its close to the main entrance. This serves as a strategic advantage as Amaya is one of the many restaurants in the mall. It would face a tough competition though. How will it fare? Only time shall tell. 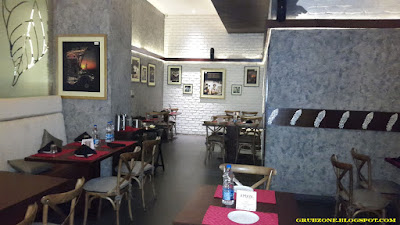 Amaya is a small restaurant with an area closer to that of a cafe. The place has a feeling of brand new all over it. It felt pristine and evoked a sense of romance. This feeling is best described as "this moment will never happen again so savor it while you can". The ambiance felt mixed. Despite being a North Indian eatery, the decor feels like a mix of a European cafe, a Victorian wall and some Rajput influences. The lighting felt just right. It illuminated the walls but was not in your face bright. Quite a comforting ambiance but it did not feel typical of a North Indian installation. 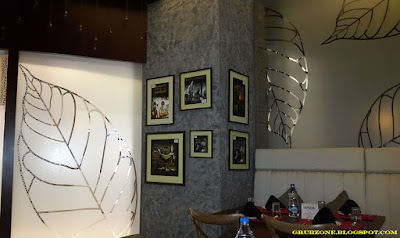 I was invited by Bellona Hospitality (is a subsidiary of the group that owns the Phoenix malls) along with some other Bloggers and Zomans as part of a tasting session. Our grub was part of a fixed taster's menu which included a large course of appetizers and a generous number of mains. 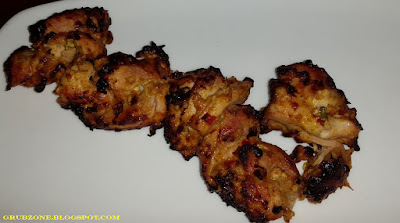 Punjabi Lasooni Kebabs were well textured, well marinated, yoghurt infused and flavorful kebabs. The garlicky core would often make these addicting to the taste buds. Each bite would bring out the flavor within. A classic well played. 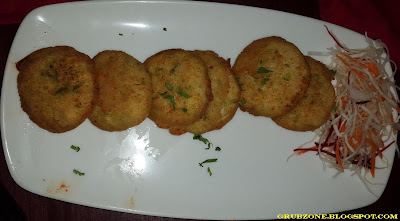 Hare Mirch aur Dhania Ki Tikki could use a smaller name as that would help people remember this tasty delight. This was the best appetizer amongst the ones served to me. The core taste was dominated by a Cheddar cheese base with balanced flavor from the coriander and spice. Despite their simple appearance, they pack a pleasant surprise within.

Captain : These Tikkis could be mistaken for Gold coins if I go by the taste.

Captain : Well put. Here is a coin for your efforts.

Crewmate : Hey! Thats a worn copper coin from your pocket. Where is my Tikki? 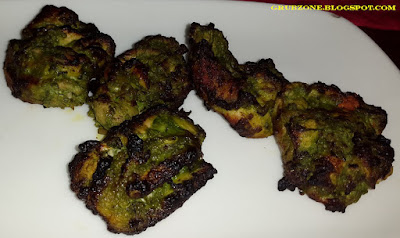 Pahadi Murgh Tikka had a strong mint(pudhina) flavor within. Even its aroma was infused with the mint. The meat however felt a little hard and there were quite many overdone areas as visible in the picture. The overall experience was still good but the blackened areas affected the aesthetic appeal of the item. 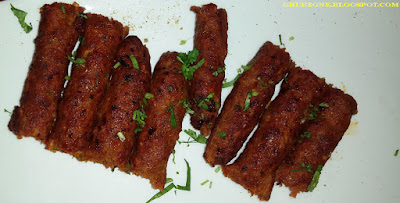 Lamb Gilafi Seekh Kebab was a little too tangy and tart for me. I suppose it originated from the cilantro added in its mix. While the item had a good appearance and texture, the flavor suffered a bit.This could however very well been a teething problem. 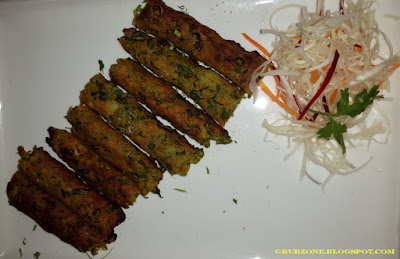 Noorani Seekh Kebab is a vegetarian kebab with a tricky name. I initially assumed that it was a meat kebab till I actually saw it. However, that did not deter me from devouring it like a ravenous monster. The minced vegetables and seasoning complemented each other like Romeo and Juliet.

Karare Macchi had a crunchy coating but the soft gooey Basa within proved to be anti climatic. I do feel that a different fish should have been used for this. Basa is too over used and feels like a misfit in some places and dishes. 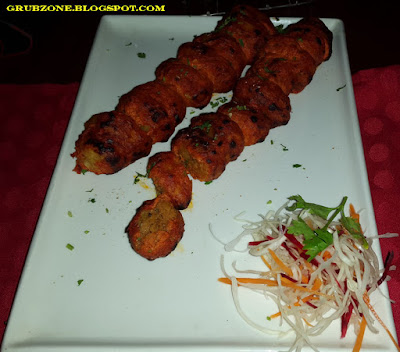 Bharwan Aloo was an aromatic and piquant preparation. Despite the humble appearance, each morsel was full of tasty potato and spices. The undertones of Tomato gave it a very Lucknow like feel. One slight issue however was that it was far too soft. It would literally melt in the mouth which shouldn't be the case for this preparation.

Captain : I'd love my potato to be like this.

Captain : Is that bad? No worries lad, I shall have yours too then.

Hara Bhara Kebab felt quite off to me. It felt too spinachy and less kebaby. This item is usually a safe choice for me at many restaurants but Amaya's version did not work well with me. The potato content felt too low as the flavor was completely dominated by the peas, spinach and cumin seeds. It also was far too soft as compared to all other Hara Bhara Kebabs that I have had.

While the appetizers had their hits and misses, for me the highlight of the Amaya experience were their mains. The Gharana style cooking made the mains a pleasant experience rivaled only by the best of fine dines. 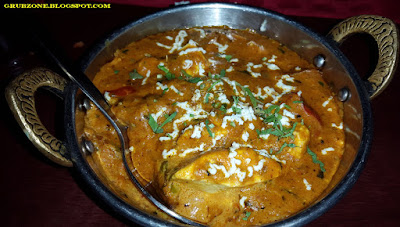 Kadhai Paneer had delectable chunks of Paneer tossed into a thick gravy made of creamy tomato sauce and cilantro. The flavor was balanced well and no ingredient dominated the flavor solely. The creamy flavor felt comforting to the taste buds and the Paneer satiated the appetite created by the wonderful aroma. The pedigree of the Gharana style cooking made this variant several times superior to all other Kadai Paneer variants that I have had. 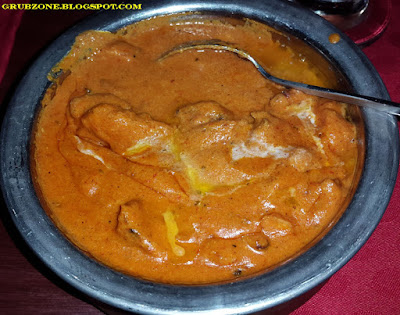 Murg Makhani or Butter chicken is one of my favorite dishes. It is one that I have had across many restaurants in India. And I must admit that this variant would easily be in my top three Butter chicken experiences. The gravy consistency was perfect. The Tomato flavoring was mild and appropriate. The creamy flavor could make a glutton out of the purest man. There was a slight sweetness that acted as the pivot to the flavor balance.

The best part was that the chicken chunks were all well done. The chicken was cut into some kind of cuboid pieces rather than random shapes elsewhere. There were no bones, burnt edges or taste anomalies in any part of the dish. The flavor had sunk in quite well into the meat. I would come to Amaya again just for the Butter chicken. Its definitely the best that I have had in Mumbai.

Captain : This is positively one of the best Butter Chicken dishes that I have ever had.

Crewmate : This is the best Better Chicken that I have ever had.

Captain : Better chicken? You mean Butter chicken. Is your tongue slipping on the cream? 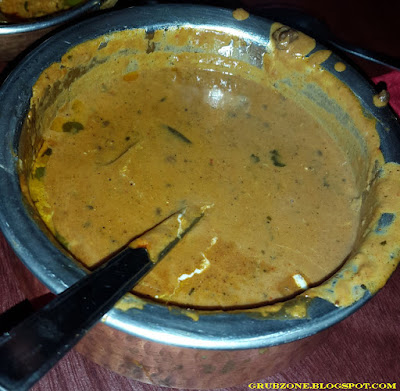 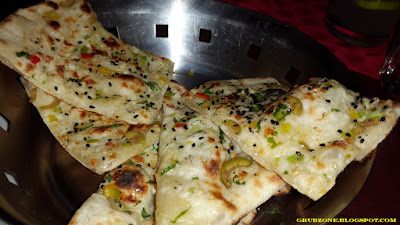 Amaya Special Butter Naan deserves a special mention here. It was among the tastiest breads that I ever had anywhere. It looked like a rainbow on a Naan. The appearance was colorful due to the different herbs present on it. All these spices and herbs enriched the flavor to something truly spectacular. It complimented Butter chicken and Dal Makhani very well. Regardless of what one orders as a main, this naan should form the bread part of the order.

Captain: I would like to meet the chef who made this Naan.

Crewmate : And compliment him?

Captain : No, recruit him in me crew. 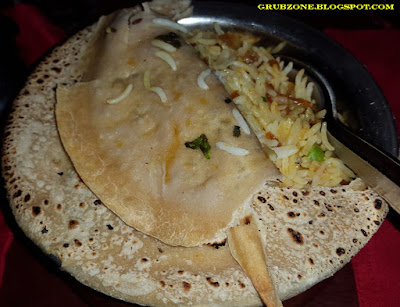 Kache Murg Ki Bhuni Biryani looked peculiar to me. It was my first time with a Dum Purdah style Biryani. It is basically covering the Biryani with a roti like dough. The dough preserves a lot of aroma and warmth inside. The chicken chunks in the Biryani were quite juicy and tasty. The rice also was flavorsome and delicious. Yet there was a problem with this Biryani.

The Chicken and Rice felt like two beautiful yet unhappy partners forced to be together. The flavors had not been married together. I supposed this too was a teething problem since everything else seemed perfect about this dish. 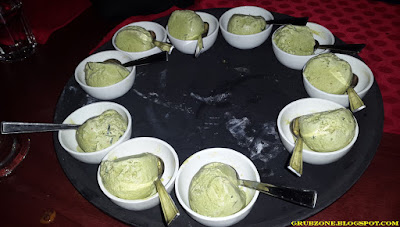 Paan Ice Cream provided a fitting end to a good Amaya story. This ice cream had a rich flavor of Paan(Betel nut leaves and Areca nut) which served as a palate cleanser, mouth freshener and a Dessert. All into one. The crushed Saunf (Fennel Seeds) also added to the above effects. I thought that it was quite odd for a North Indian place to serve ice cream as dessert but the Paan flavor made it shudh desi.

Captain : This is the Indian peppermint.

Crewmate(chuckles) : Or peppermint is the western Paan.

Captain : Trying to be clever, are ya lad?

The service was satisfactory. The servers were polite but they often lacked information on dishes. So a bit of polishing up on the service would be nice.

The pricing is higher than the average casual dining place but lesser than places like Zaffran. For the quality that was served to us, I felt that the prices were well justified.

To round this up, I shall just say one thing - If this place was close to my home, I would regularly come here for the Murgh Makhani and Amaya Special Naan. Amaya is a new restaurant which has got most of its notes in the right place. The food (especially the mains) is fantastic.

And, I will add a special note here -  the food was surprisingly light. I often feel heavy after my North Indian food outings but I felt no such thing here. Some of the grub appeared oily but yet did not feel oily nor heavy.

"It feels sad to depart lads but onward we must go. Its a long way back to the ship and a longer voyage out on the sea."


-I was invited to wine and dine at the establishment as part of a connoisseur meet. -
Posted by Rishabh Mittal at 3:26 am