The waves rose and fell as the ship traveled over rough seas. A storm was on the horizon and I wondered if I shall make it to a safe coast before hitting the tempest. I looked up at the sky as I heard a distant thunder. I took out me looking glass and stared into the infinity. I spotted something in the distance. The lookout looked down at me and smiled, "Land Ahoy, Captain." I grinned as we avoided the storm and made it to the port. "All right lads, haul in the sails and dock the ship."

Traveling to Vashi is like traveling to another town. In fact, its so far that even free grub may not be a carrot large enough to lure me. Although if thats a cooked tasty carrot, then I may re-consider ha. So when I was offered an opportunity to taste at a newly opened establishment, it did put me in a fair amount of thought. Traveling through Mumbai's rains can be quite a daunting task and if one gets stuck in traffic due to the rains then it can be a self haunting decision. So like any sensible person on the planet, I left my decision on nature. If rain then no game. 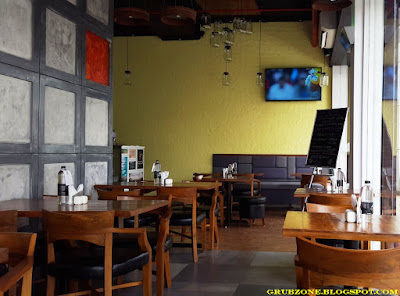 On the fateful day, there was no rain. Smiling, I picked up my stuff and went ahead with my trip. The fare was well worth the trip in the end. My destination was a little hard to find since its located inside a building whose main entrance says "Do not Open Door." Yet one must push that door to go in. The Salad Bar & Walnut Cafe is located on the first floor of Haware Infotech Park and by that I actually mean a single building. The small cafe sits quietly near the balcony facing Hotel Sheraton. It resembles an evening pub due to its decor and such but its a cafe indeed.

I would have loved to come in the evening. The lights and the colors felt like they would be more lively past sunset but I guess that is for another time. I quietly sat on a table by the large glass panes facing Hotel Sheraton and some giant beehives on a building far far away.

The Salad Bar serves healthy grub while the Walnut Cafe serves continental grub. My experience was a mix of both these worlds. Its important to note that this place offers 26 different kinds of salads so its a heaven for a salad lover. 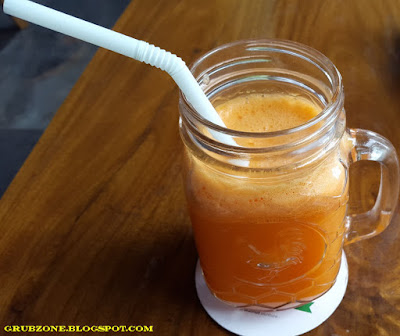 Citrus Cooler was a health drink and each of its ingredients played a key role in it. The Orange provided the color and primary flavor, the carrots added the roughage, the ginger supplied the secondary flavor and a tinge of honey for natural sweetness. Although not billed to contain pomegranate, I positively felt that there was some Pomegranate in it. Strictly for health and salad buffs.

Captain : Somehow, I feel that this little muggy would have done better with some rummy.

Crewmate : Well Cappy, we do need strong hands on the helm or we are doomed.

Captain : One for the crew then. 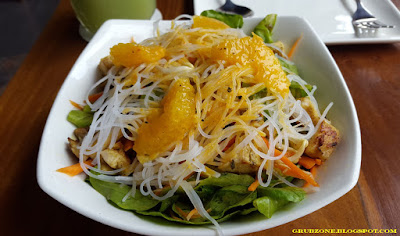 Arugula Curried Chicken Salad was a house special made of glass noodles and contained Arugula(obviously), Water Chestnuts, Curried Chicken, bean sprouts and Lettuce. It came with a Orange Carrot Vinaigrette dressing and a generous sprinkling of Orange Zest. As a vegetarian salad this item was perfect. The plating appeared appetizing and the grub was made of healthy ingredients. As a chicken salad however, I felt that it could not make the mark. The amount of chicken felt too little to make much impact on the taste. It almost felt like Irrfan Khan's screen time in Jurassic World. 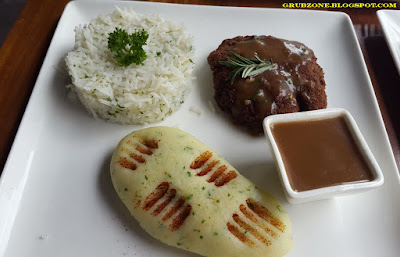 Moving towards the Walnut Cafe world, I started with a Minced Lamb Steak. The presentation was amazing. The potato mashing was very flavorsome and felt much like the potato stuffing used in Aloo Parathas. It was much better than the tasteless potato mashes served in some upscale places. The Lamb steak was made out of minced meat and served with Demi glaced sauce. Herbed Rice completed the roughage segment of the dish. The steak was very tender and full of flavor. It's taste was further enhanced by the Demi Glace which is akin to giving a buffed bodybuilder a loaded machine gun. More win on something that already wins. A bit of meat with some mashing and a spoonful of rice provided a fulfilling bite. 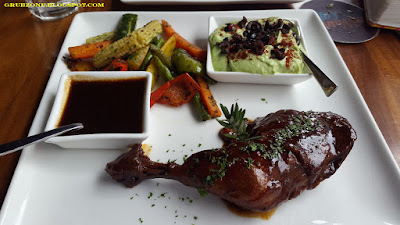 Chicken Teriyaki is a dish with which very little can ever go wrong. A nice tender leg of chicken completely draped in Teriyaki was served with some vegetables and a mixture of Pea puree and Humus. The Pea-Humus mixture(or Phumus henceforth) was an excellent concoction. I was initially worried that it will pale in front of the Teriyaki but it was a formidable teammate in itself. The flavors complimented each other quite well. The plating was good but just for aesthetics, a little Teriyaki art won't be bad.

Captain : Tis' be just one drumstick. Now how do we share that?

Crewmate : Well we can try cutting...

Captain : You can have all the greens, leave the little drumstick for me. 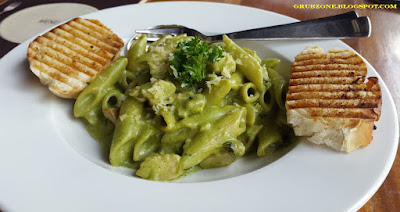 Basil Pesto Pasta was one of the best Pasta dishes that I have ever had. Toasted garlic bread topped with a portion of Pasta and chicken tastes quite heavenly. This dish pleases three senses namely smell, taste and sight. The plating may not be the best but its quite good. The flavor was a wonderful blend of Parmesan, Pesto and Basil with soft pasta (slightly beyond Al Dente). A true tease to the tongue if I may put it loosely.

Captain : So I take one slice of bread, put some pasta in and cover it with the other. A perfect pasta sandwich.

Crewmate : That be a fine idea Cappy but that doesn't leave any bread for me.

Crewmate : Are you even listening?

Brownie with Ice Cream looked good on visuals but the taste was no different from the average Brownie elsewhere. Apart from Brownies, there was an eggless pastry and cheesecake on offer. I felt that they could do with a few more dessert options.

The service was decent. I did feel that the server fumbled with descriptions and could have been more informed.


The pricing seems to be tipped on both sides of the scale for me. For Salad Bar, I think its slightly on the upper side. For Walnut Cafe, I feel its just right for the mains. Some items feel cheaper than the prices that I am accustomed to in Mumbai and some feel higher.


The Salad Bar & Walnut Cafe has a lot of highs. The highs include the health food, flavorsome mains and the pub like ambiance. The only low for me was the lack of choice in desserts on the day. 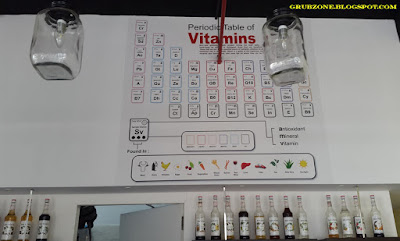 Leaving this Vitamin periodic table picture here since I felt it was hilarious.

"Oye fellas, all that health food should have powered your lazy arses up. We have dark clouds on the horizon. Put all yer sweat and power in. Lets steer through the storm."

-I was invited by Pooja Trehan Dhamecha of NaviMumbaiFoodies to try out the place. These interesting folks can be found on twitter.com/navimumfoodies -
Posted by Rishabh Mittal at 2:35 am