Continuing on our adventure from last time, we were still hunting for spare parts to fix our broken power generator. Our destination today was a large island which would definitely have what we need. These lands were brightly lit at night and I could clearly see the the glowing coast from me looking glass. Suddenly, I spotted something rather strange. This was not the Caribbean, but there was a shack which somehow resembled a Cuban tavern. "Spare parts can wait, lets have a grog banquet first men.", I said. Me crew cheered as me Engineer sighed. I promised her that we would not return without the spares. 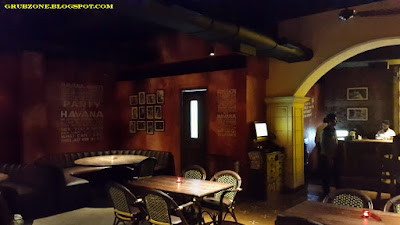 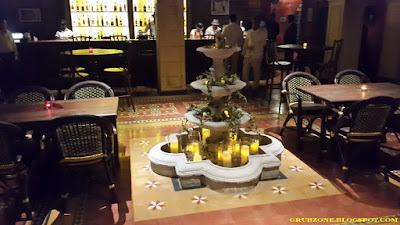 Going to the Cuban Capital may be a long stretch for most, but its certainly easier to go Havana Cafe. Located at the Gordon House hotel in the fancy part of town, this place is in a neighborhood with many giants like Cafe Mondegar. The cafe is fairly new but the commerce is running smoothly and one feels as if it has been around for ages. Finding it could be troublesome since it doesn't have many visual cues pin pointing its location and you must ask the Gordon Hotel security staff about its location on the first floor. 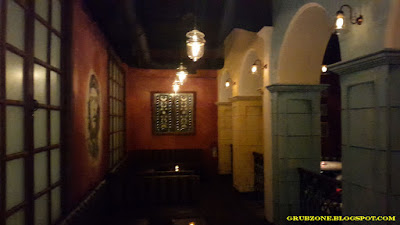 Cafe Havana is far from being a perfect replica of Cuba, but it does create its own vibe and embraces some popular Cuban beliefs. The dim lit ambiance is perfect for a long weekend evening and the cafes operational hours(open till 3 am) allow people to really chill out. The music could need some work as it doesn't feel Cuban or Spanish or Caribbean for that matter.

People wearing Fedoras in the cafe was quite intriguing. Though I have positively seen round hats and Castro-isque Caps more often than Fedoras in Cuban pictures.

This evening was almost a convention of Food bloggers, Reviewers, Lifestyle bloggers, Twitteratis, Instagram Influencers yadda yadda etc. There were a lot of guests including myself invited for an opening night party. The establishment is operated by the well known Mars Hospitality (Of Pizza by the Bay fame) group and thus it was expected that they put up a grand show.

To start this off, Cafe Havana is more of a bar and less of a cafe. Don't come here expecting good grub. This place is strictly a watering hole at least for now. There is a small food selection available which mostly can be described as bar nibbles.

There is a large selection of Grog on the offering. Many classics and some Caribbean themed mixtures like Cuba Libre, Mojito, Havana Sunrise, Zombie, Pink Flamingo etc. 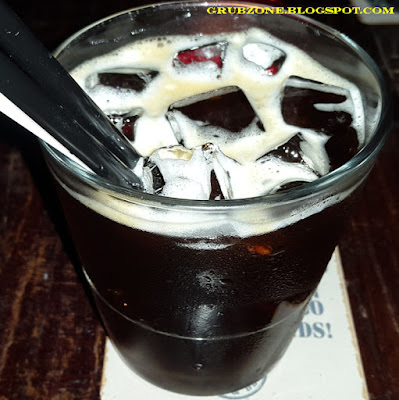 Marked as a house specialty - The Jack Sparrow cocktail is a strange one. Its different from the Captain Jack Sparrow cocktail in the west which uses Captain Morgan's Spiced Rum and Pineapple juice. Cafe Havana's variant used white Rum, Kahlua and Mocha to make an unique blend. Being a lover of Rum cocktails, I cannot say that this was the best that I have had. It was certainly fun but the flavor was mostly dominated by the coffee rather than the rum. It carried the kick of the rum but had the flavor of Coffee.

In modern times, Sparrow is probably doing a desk job(software pirate perhaps) and uses this instead of his regular rum fix. Though I think old Sparrow preferred Red or Dark Rum over white.

Captain : Mocha in my Rum? Thats quite queer.

Crewmate : Do you dislike it Cappy?

Captain : No, but methinks Jack Sparrow wouldn't like coffee in his rum. 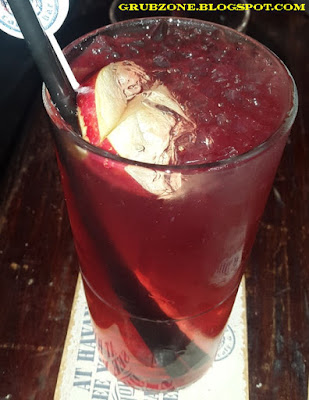 Acapulco was my choice for a non alcoholic drink.  Though Acapulco is not in Cuba, I went for the mix anyway. Billed as a mixture of Cranberry, Apple and Honey - its flavor was mostly dominated by Apple juice. The thing about most branded Cranberry juices in India is that they use a mixture of Grape, Apple, red food coloring with some Cranberry essence and call it a Cranberry juice. If one uses this concoction in a mixture that already contains apple juice, then the flavor will definitely be dominated by the Red fruit. It was lacking the tang that Cranberries provide making it a sweet red colored apple drink.

While the grog is definitely top notch and will satisfy most people's evening fix. The grub that accompanies the drinks is quite average and definitely needs improvement. 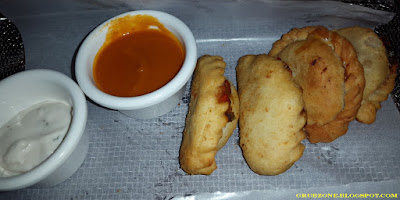 The Empanadas were tasty but did not feel Spanish, they reminded me of the savory Kachori like snacks we have in India. I am not saying that this was a bad thing but an Indianized Empanada doesn't quite fit in the whole Cuban theme. 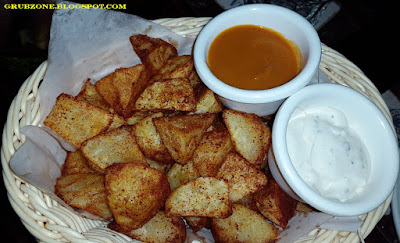 Paprika dusted Potata Brava is a decent emulation of the Spanish snack. The flavor was similar to potato wedges. It went well with the Garlic Aioli but not so well with the Mojo sauce. (which accompanied all nibbles in the evening.) 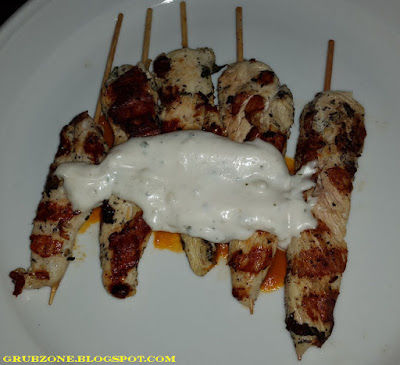 Chicken Aioli skewers resembled Satay but the flavor was distinct due to the chicken being soaked in milk. The meat was soft and felt pleasantly juicy. The only problem was that the served portions felt less. 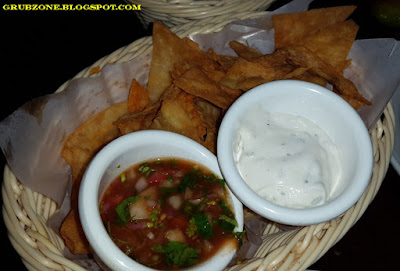 Crisp fried Nachos were quite addicting and an item that went well beyond its mark. The fried Nachos were coated with a cheesy powder similar to that found in snacks like Cheetos. This not only reduced oiliness, it also added an addicting flavor to the nibble. The item was served with sour cream and homemade salsa. Went better with the sour cream as I felt that the salsa was a bit too mild for me.

Captain : This is not tasty, you wont like it lad.

Crewmate : You seem to be enjoying it all alone though Cappy. 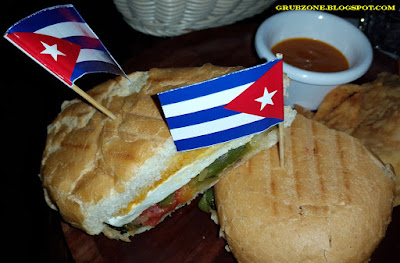 Cubanos may not really require Cuban flags but its fun to see food with flags once in a while. For a vegetable variant, this was certainly flavorsome. The paneer was well flavored and did not feel like an outsider in a savory spicy sandwich. Good for veggies who would otherwise demolish a place for the lack of non meaty grub. 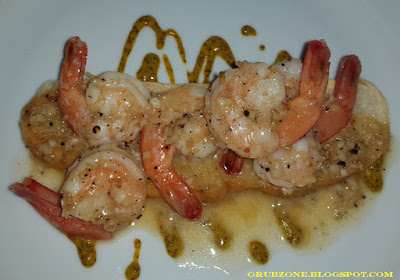 Pan seared prawns was the best nibble of the evening. It was plated well and thus felt appetizing. The taste was savory with the prawns being just right and the garlic butter sauce enhanced the flavor even further. Methinks, this is a safe bet for people looking for bites to go with their drinks.

Captain : I would love to have this at night with me bottle of Captain Morgan on a table under the stars.

Crewmate : I doubt the ship cook could whip this up.

Captain : Quite sad, isn't that lad? 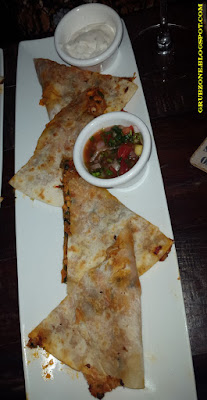 The Chicken Quesadillas were a major disappointment. The taste was below average and there seemed to be absolutely no cheese in it. The portion size felt too small as well. The flavor was very much Indianized with the chicken tasting like Chicken Keema. A shame since I love Quesadillas. 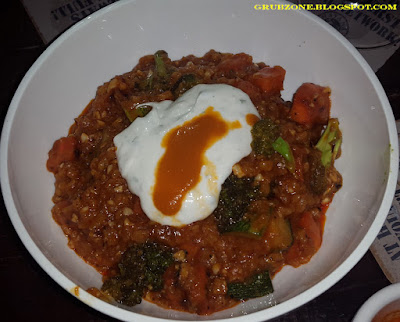 The Paella neither resembled the Valencian delicacy nor tasted anything like it. If anything, the flavor was closer to an average Risotto. I had a few bites and moved on. 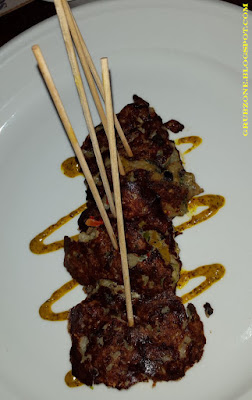 Fish Fritters had an interesting presentation but the flavor was easily forgettable. Best to stick with the prawns if you have a craving for sea food. 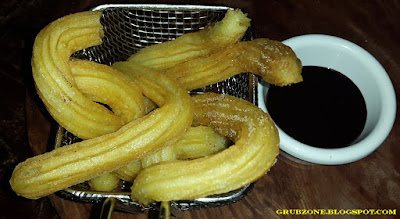 The Churros were soft and easy on the palate. Normally, Churros are supposed to be a bit tougher but I personally do not mind soft variants. The problem here was the fact that the Churros appeared undercooked due to the color and the dipping sauce was too runny. 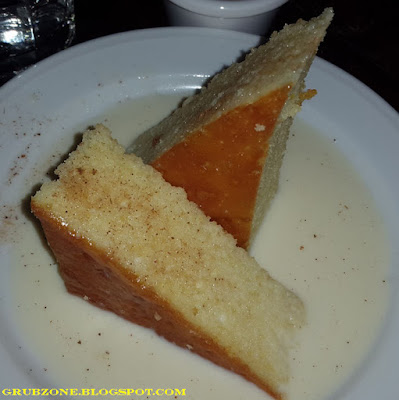 Tres Leches did not quite live up to its name. It looked and tasted very dry. Felt more like a regular cake. The milk reduction had probably been excessive.

Flambeed Bananas was a fun dessert. With a little bit of pyrotechnics thrown in, this sweet banana dessert was served with Rum and orange reduction. The Rum added the sweet tang to the flavor while the bananas added the fullness. Was a good comeback after the first two flops.

Captain : This is pretty lad but I am not fond of Flaming bananas.

Crewmate : From the bonfire of splendour, came golden flamed bananas. Soaked with rivers of rum and orange juice.

Captain : If you were trying to do an impression of me loving desserts, then that was a very bad attempt lad.

The service was average. It is understandable that our group was large and a few glitches here and there can happen. However, Havana needs to get its comrades together and work on the service.
Despite requesting the server for non vegetarian variants of certain items like the Cubano, I was never served the same. Mars Hospitality has great service in some of its other establishments and I would like to see something similar here.

The pricing tends to be on the upper side. While it is justifiable for their drinks as its some fine stuff, the grub's quality needs to match up to its pricing.

At the end, I enjoyed my Havana experience. The atmosphere gets to you. The vibes are good and the music works. Their drinks are on the mark for the most part, just that they need to work on the food. I understand that its strictly a bar but as long as food is present on the menu, it should be improved. Since the place is fairly new, it is expected that they will work on the quality and make Havana a better place next time.

"Its late lads, but the Engineer wont spare us without the spares. Lets sober up and find those parts fast. Until next time."

-I was invited by the restaurant and Boomerang Media as part of a Bloggers and Influencers meet. Thanks go to Chandni Tolani for inviting me.-
Posted by Rishabh Mittal at 9:11 pm