Me ship was docked at a major port and the crew were attending to matters of their own. I had some time alone and decided to meet a few of me friends. They had chosen a fancy restaurant in the posh part of town. The chef was apparently a superstar or so they said. Confident that nothing could possibly go wrong, I decided to join them.

My Ellipsis experience largely reminds me of the old tale about the Emperor's new Clothes.


Usually when one sees a highly rated uptown establishment with a lot of raves penned by well known food critics and newspaper journalists, one assumes that nothing will go wrong. I am not a superstar food critic or a journalist. I am that ordinary guy who loves his food, knows a little bit and writes about it. Sadly as that guy and a customer, I must say that I was thoroughly disappointed with my Ellipsis experience. 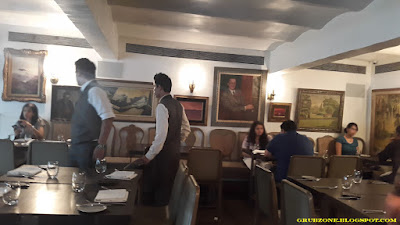 Ellipsis does not have an inspiring ambiance. It looks crowded with little space between tables. The decor looks like it was done by some hack in a hurry. The furniture is not comfortable. And the random art pieces attached to the wall feel as if they are a patch up job to make up for the mediocre ambiance. It was akin to buckets under holes in the roof. Such an ambiance is almost a cardinal sin for a place that bills itself as a fine dine. 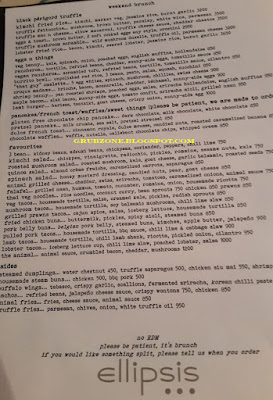 I fully understand places which have dynamic and ever changing menus. Its fun and it keeps the mystery alive. But as a human being with some rational sense still left in me, I have to question why Ellipsis changes the menu completely. And is the rotation pulled out of a random generator or actually planned?

When we planned out trip to Ellipsis, we were sure that they would keep some of their star attractions on their menu. But what I ended up with, was a menu with absolutely nothing that appealed to me. No fish, rarely any chicken dishes and full of mediocrities which at best can be overpriced appetizers and not mains.

When one walks into a fine dine, they certainly expect more than tacos and salads. If I wanted those, I would pay lesser than a tenth of the price and sit at a fast food joint like Taco bell. 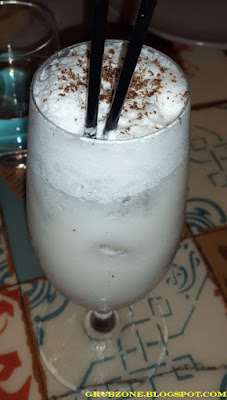 Not Colada was a virgin take on Pina Colada. More than Not Colada it was a No Colada. For a drink priced at INR 350, there was barely any liquid. Ice chunks filled more than half of the glass with barely four sips of the liquid. Such practices remind me of shoddy cafes in the 90s that adhered to this profiteering tactic. To see this disreputable act being replicated in a fine dine immediately soured my mood.

I wondered how it would be if the seas were to be like me drink. That would mean a lot of undersea ice age. 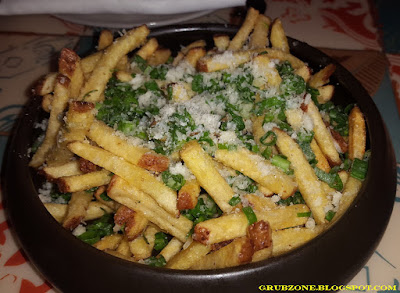 Truffle fries were well plated and tasted fairly well but in the end were just fries. I am not going to wax eloquent on how brilliant these fries were. What put me off was the price tag of INR 950. Even if the restaurant claims to import its ingredients straight from France or Ireland, this price does not justify it.  There was nothing spectacular to merit that kind of price. I do feel it was priced at least three times then it was worth.

These fries better be made of gold at that price. Or at least Silver. 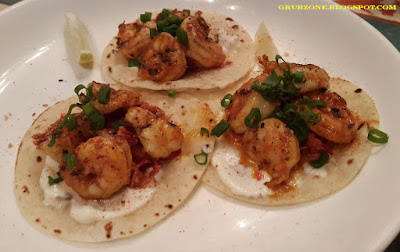 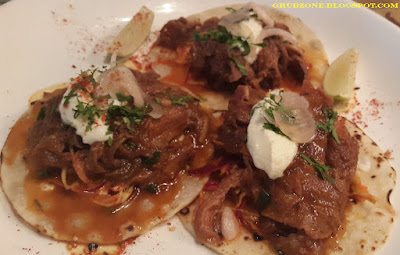 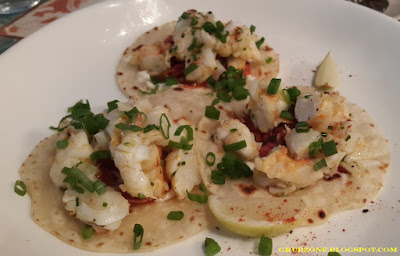 The Shrimp, Lamb and Lobster Tacos varied in quality.

The Shrimp Tacos felt like a filler snack not having an awe inspiring flavor or anything memorable.


The Lamb Tacos were a through disappointment. The flavor felt very Indianized resembling mutton curry.  It was the kind of stuff you would send straight back to the kitchen.


The Lobster Tacos were promptly showered with lemon by an acquaintance who knew his sea food well. These tacos felt quite juicy, tangy and seemed to partially make amends to the lack of fish. These were plated in an appetizing manner too.

The portion sizes were again meager for items billed between INR 850 to INR 1000 a plate. This is going to be a running theme for the rest of the post I fear. 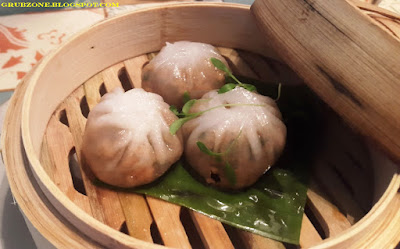 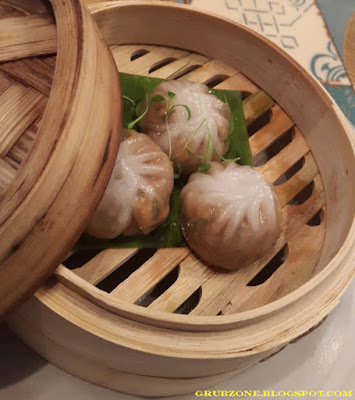 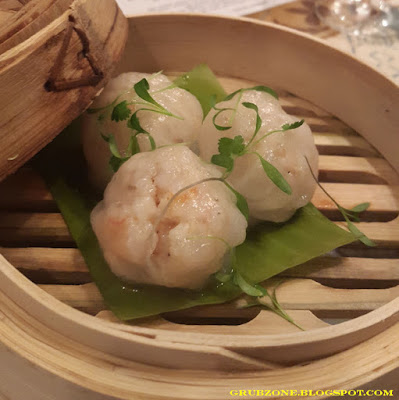 The Chicken, Prawn and Shrimp dumplings were as uninspiring in their taste as their appearance. I have been to Hong Kong, Singapore and Philippines and have had dumplings that came straight out of food heaven. And despite the last minute power plating attempt by the chef, I felt that the damage could not be undone. The meat was not minced well in any of the dumplings and felt very chewy. There was barely any flavor to rave about.

Methinks, these restaurant chaps would surpass scrooge. Maybe they need to be visited by the three dining spirits to help them fix their ways.

Lastly, it felt kind of miserly for the restaurant to serve just three small dumplings in that huge basket. I usually find five or six wherever I go. I have found eight in a restaurant in Hong Kong. And do note that all these places charged lesser for the dumplings. The appearance is very unsatisfying. At 550 INR, three dumplings is a ludicrously overpriced affair. Our motley little bunch was expecting at least five.

Pork Belly Buns were billed to be made out of Belgian pork belly containing Apple butter, Kimchi and some other fine ingredients. Though, I still didn't understand why three tiny buns would cost INR 900.

The first bun felt nice. The meat was well tenderized. The apple butter was in meager quantities but apparently present(as a sweet flavor could be sensed). The Kimchi was so less that the buns would have done well without it.

The second and the third buns however had chewy and harder meat. It's not fun wrestling with your food in the mouth. There was also no elusive apple butter in buns two and three. In fact, the buns felt very dry and lacked the juiciness the first one had. I would have been happier if all three buns had come from the good batch. Oh well, at this point I was happy that at least one piece met the mark. 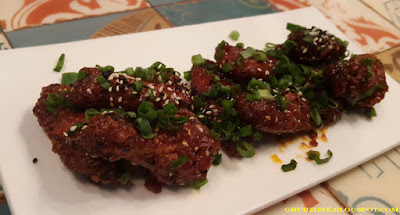 The Buffalo Wings seemed to be the only item that felt like a relief to the whole Brunchisaster. The plating was good, the meat was juicy, the coating made with the perfect batter. The thing even had a delectable aroma. Shame such quality could not reflect on the rest of the grub.

It be a strange affair to find Chicken wings to be the best dish in a fine dine restaurant. Next time I will stick to a tavern. 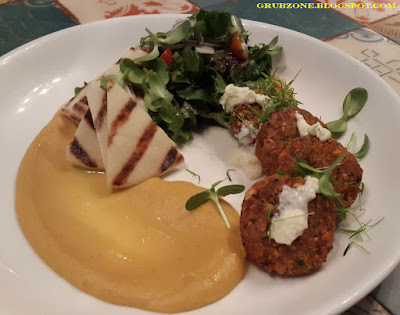 Ellipsis' Falafel was a classic example of why no chef should claim to know all cuisines, let alone try it. This abomination tasted like Indian Moong dal vadas. They were hard and the texture was not typical to the Falafels I had in the Middle East. The hummus felt flavorless and rushed. While the dish was plated gorgeously, the flavor fell flat in comparison. It reinstates the old belief that the thing that looks good doesn't necessarily taste good.

I could hear Darth Vader grumbling somewhere about the lack of desserts being disturbing so we had to make do with some of the sweet breakfast treats as dessert. 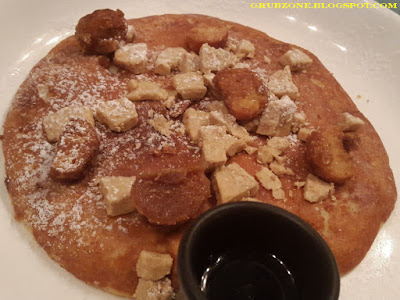 Pretzel Pancake looked more like a Pancake that gained weight and became a unpancake. The item looked like a large cookie or a deep dish pizza and deviated greatly away from being a Pancake. And I wonder whether using a bit of Pretzel Streusel qualified the usage of Pretzel in its name. I imagined that it would either have small pretzels peppered over it or atleast have a side of pretzels. That would totally be justified for INR 850. The item lacked its own flavor and relied a lot on the provided sauce. 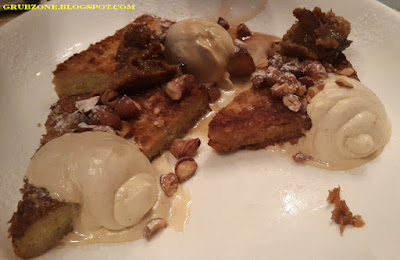 The Dulce French Toast was the better of the sweet things that we ordered. It was well plated and loaded with Dulce mousse, candied nuts and caramelized banana. The toast itself was neither too soggy nor too crunchy. It was one with everything else hence perfect. I felt that this was the only item that completely lived up to expectations and the only item which lived up to its INR 850 price tag.

This be a tasty little morsel but not good enough to write a poem about. There are better things across the seven seas.

The service at Ellipsis was definitely one of the poorest that I have ever experienced. The servers were clueless about the items on the menu, quiet impatient and lacked professionalism. It took us quite a while to get their attention and they were really dragging their feet on providing water or cutlery. Two servers almost got into a physical fight. They were having an unpleasant argument and one of them angrily snatched a serving tray out of his mate's hands. The plate could have flown out of the guys hand and landed on the customers. This is not expected of any restaurant, let alone a fine dine.

I have covered pricing within the food descriptions itself but to summarize the same, Ellipsis is over priced for the quality and portions it serves. At INR 2250 per person, I could get a far superior experience in a place like Indigo.

To conclude, nothing worked for me and my buddies at Ellipsis. The whole affair left us with a feeling of being cheated. We spent good money to get absolutely nothing. Hence, this brings an end to my tale of the Emperors new clothes. Appearances can be deceiving.

"Hope you lads had a better time in town than me. Time to haul the anchors and sail out."

Posted by Rishabh Mittal at 7:35 pm