The winds roared as me ship sailed along the coast. I love the rains as tis' be the season of stronger winds, giving me ship more mileage. I was scouting the shores for coastal taverns. Suddenly, I spotted two - A small Bistro and a large cafe. Being a sailor who has an eye for hidden gems, I chose the Bistro over the cafe much to me crew's chagrin who always assumed that bigger is better. I looked up, read the Bistro's sign and smiled. "Kurries and Burries eh? What's your story?" 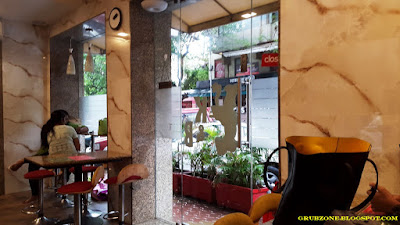 Kurries and Burries is a quick service restaurant with a very Bistroesque feel to it. It faces the ginormous establishment of Starbucks and is akin to David staring Goliath in the eye. Anyone would wonder if this little Bistro can survive with a Starbucks facing it. Well, open the doors, and dispel your doubts. This Chota Bheem can beat the great Samson.

Filled with college kids and youngsters of all types, this place seems like a popular shack that has been running for ages. All that despite being relatively new. It started as a final year MBA project by the young Kushal Todi with the aid of his elder brother Mitul Todi. But the project apparently became a massive success and the rest is Lishi. (That's Chinese for History)


A comfortable and golden lit ambiance awaits the patron. Due to restaurant's small size, the seating could be limited during lunch/dinner hours but such is always the case with all quick service restaurants. No matter, one could always order take out or pick up food to be eaten elsewhere.

The menu is mix of Mexican and Asian primarily. And its all vegetarian but there are some items that could make even the hardest of carnivores happy. 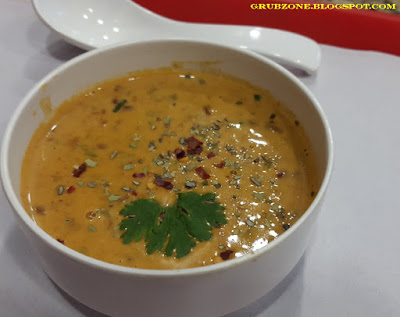 Mexicana Soup - Whenever I hear the word Mexicana, my mind automatically plugs Hermosa after that and then somehow I get a vision of Salma Hayek running on a beach. Beautiful thoughts before a grub are always healthy ahem. This is a soup made of a spicy mix, Mexican beans, coriander, Tortilla bits and I think I sensed some Masoor lentils too. The soup strikingly resembles Dal Makhani in visuals but rest assured that it does not taste like it. The flavor feels Mexican with notable Indian influences but nonetheless its quite addicting and I found myself cleaning up the bowl in no time. 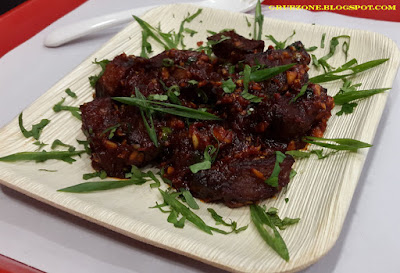 Kung Pao Potato could be really spicy. Those with a low spice tolerance should best avoid this but those with a normal tolerance must relish it like no tomorrow. Made with large dices of well cooked potatoes wrapped in Chili and Schezwan sauce, this dish was literally a party for my taste buds.

Captain : I feel all fired up after eating this lad.

Crewmate :(Narrows eyes and smiles) Do you mean that the spice got to you?

Captain : What? No, what in the name of Davey Jone's Locker is wrong with you lad? You are trolling your Captain now? 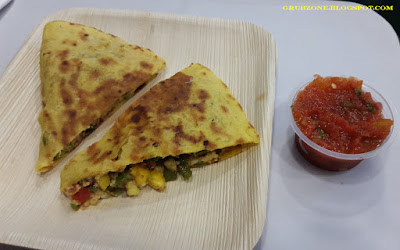 Mex-O-Fusion Quesadillas provided little entertainment as compared to the blockbusters above. The flavor was a bit flat and the tortilla somehow tasted similar to Theplas. The filling was chiefly made of corn and greens. There should have been a bit more cheese as I found it a little low for my liking. And the salsa dip somehow felt redundant as it did not add to the taste. 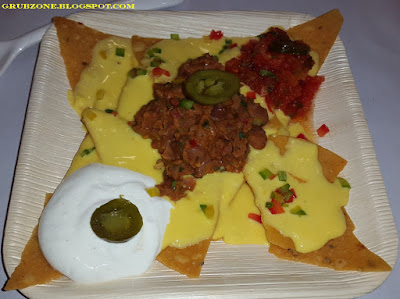 Nachos Supremo was visibly enticing but again fell a little short of being ideal. The Tortillas and the cheese were excellent. I quite enjoyed that part. But I felt that the Mexican bean mash in the middle was very mild. It seemed to lack its own identity and I promptly shifted that out and ate the rest of the Nachos. The mashing felt like a home breaker in a perfect marriage between the Nachos and the cheese. The salsa was uncharacteristically mild. I do expect the salsa to be quite spicier then it was. 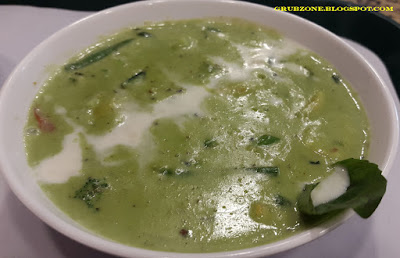 Thai Green Curry was an absolute delight. It was well plated and the flavor was far better than the average Green Thai curries. I usually avoid Thai curries since I dislike both rice and coconut but this was literally my "green eggs and ham" or shall I say "Green curry and coconut" moment.

The spices were just right, the dish had a soft texture with a creamy feel, soul touching aroma and just the right amount of coconut. The moment I took in the aroma, my hands moved on their own loading the curry and rice into my mouth. It was so good that it got over faster than the time you took to read this paragraph. Guess Kurries n Burries lived up to its name.

Captain : The spices right. The curry light. This sailor feels all right.

Crewmate : The rice is white?

Captain : There, you just ruined my poem lad. One month of toilet scrubbing duty for you.

Crewmate : The Captain's bullying me with all his might?


The place is largely a self service establishment.

The pricing is fair for a place located in Chowpatty. The fact that its always packed with students perhaps is a testament to its comfortable pricing.

They have a large delivery radius with deliveries being made as far as Nariman point and the bulk of their business comes from deliveries. There is just one thing that they need to work on, they need to improve the store visibility and store front. With Cars being parked in front of the entrance, KnB could be hard to spot and hard to get in.

But for the most part, great food for everyone and a real treat for vegetarians everywhere.

"You had yer fill lads and now I want all hands on deck, there be storms and sea monsters ahead. Hasta la Vista."


-I was invited by the Restaurant to sample some of their grub. -