It had been a rough day and I was almost falling asleep on the helm. At sea good sailors often pray that the voyage is safe, that they have good grub to eat and perhaps some love along the straits. As I steered me ship through the dark sea lanes, there was a small noise on the radio. I looked at the innocuous radio and felt that it was my imagination. Tiredness can cause hallucinations after all. Then suddenly the radio came alive making me jump on my feet.

The voice on the radio belonged to a fine young lad that I had met in me travels. He sounded excited and asked my position. On providing him the same, he asked whether I could join him in an ongoing carnival on a nearby island. My eyes opened wide. "Tired, who is tired?" I stormed out of the pilothouse.

"Lads we have a CARNIVAL going on nearby, full speed ahead." For tired men, they executed me orders almost instantly. After all - A good sailor never passes down a dame, a feast and a carnival. 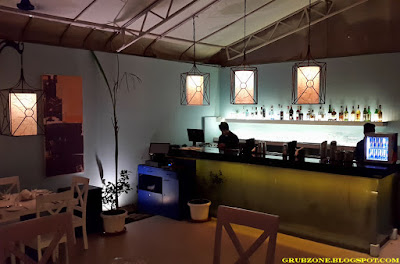 It is often said that if you think of something hard enough, it actually happens. Ever since the famous book appeared on the shelves, many food reviewers and bloggers started calling themselves as some variant of Eat-pray-love-repeat. But that wasn't the miracle we were waiting for. The miracle was a casual Italian Diner called Eat Pray Luv that appeared in Bandra. 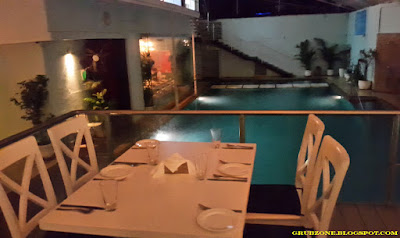 Eat Pray Luv (EPL) is a sparkling new establishment that has appeared on the rooftop of a building called C'est La vie translating roughly to "Thats life". The building is a club that houses several clubs and a rooftop swimming pool which faces EPL.

Whether by design or by sheer co incidence - The wind entering the roof from the gaps, passes over the pool becoming cool and makes the environment pleasant. Our very own Hawa Mahal if you may. That readers, indeed is life. The pool and the illumination from the dim orange lights set up quite a mood. EPL aptly sits as the crown on top of C'est La vie. 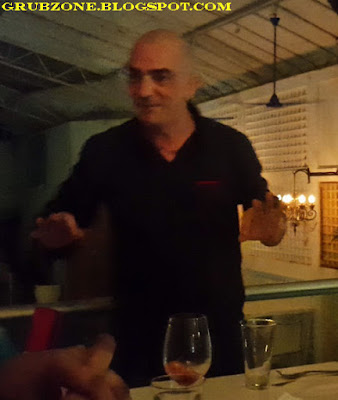 EPL is the creation of Chef Davide Cananzi who after his stint with Mariot group and Mezzo Mezzo decided to champion his own place in his image. Davide is an energetic, multitasking and a funny man with a rather zany sense of humor. He is also hospitable and seems to be a cool cat. That explains his choice of having a rooftop place near a pool. Its a place where the coolness could probably calm down even the likes of Arnab Goswami. Someone give this man a thousand cookies.

I was part of a little Blogger meetup organized by Team EPL (nothing to do with IPL I swear). Jay Dhawan, one of my young friends, suggested my name to the team hence getting me on board for the experience.

The evening started with the first course of drinks. Since I was tired, I settled for a virgin......drink that night. 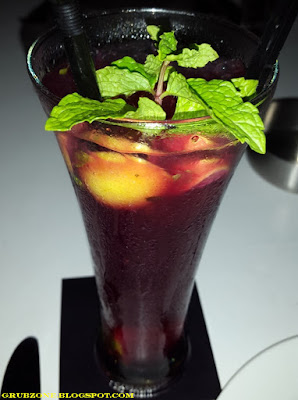 Berry Mojito was a tangy, sour and a candied version of the regular Mojito. The appearance looked classy and it worked quite well for a virgin Mojito. The sour came from lemons while the sweetness from cranberry and strawberry. Just to note, that those with a lower tolerance for sour may not be too fond of this. 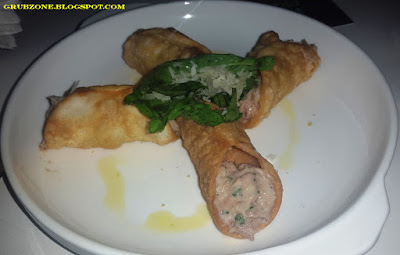 When in Rome do as the Romans do, when in an Italian place with an Italian chef - eat what the Italians do. Salted Tuna Cannoli were tube pastries filled with a delicious mix of cream cheese and soft Tuna. The Tuna represented coastal grub while the Cream cheese symbolized modern Cafe grub. Brought together and they produce a taste like none other. It would be fair to say that flavor oozed out of every bite into the pastry. Cigars of glee I'd say.

Captain : This is truly a dish for a Captain.

Captain : You can have one lad. 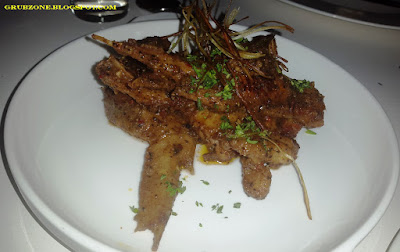 Jerk Chicken Wings is a Jamaican delicacy that I don't find too often in Mumbai. In fact, I have only been recently acquainted with this bar nibble. EPL's version was plated well but ended up being an insipid experience. Usually, a good chicken dish calls out to me and I rarely pass the plate with just a tasting portion. 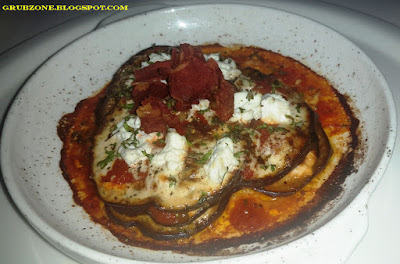 Baked Aubergine with ricotta and ham was a visually pleasing dish. It felt fine for the most part though it was not enough to surpass my dislike for Aubergines. The edges of the aubergine slices felt a bit sharp and stiff. The dish however was thoroughly enjoyed across the table suggesting that my nitpicking with it could be due to an inherent resistance against the purple bulb. A person who is fine with eggplant would probably enjoy this better. 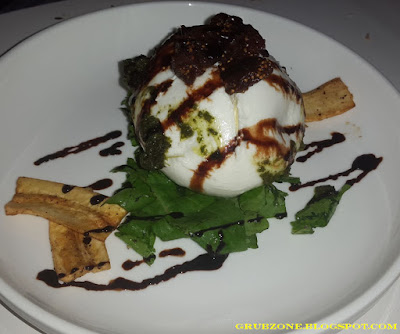 Is it a dollop of Ice Cream? a Raj Kachori? Nope it was Burrata with happiness and thrills on the side.
This was my first encounter with this dish and obviously I did an itty bitty googling on the same. I could not find a picture that looked better than what was served on my plate. It won over me visually. The item is literally the holy grail of cheese lovers every where.

The outer shell seemed to be made of Mozarella while it was filled with softer cheese and cream within. The balsamic caramelized figs addition was like a crown on a king. Salty, savory with a a bit of sweet and tangy. This complete package was quite an experience. This is one of the best things I have ever had Burrata..I mean Brotha.

Captain : This has goodness oozing out of it.

Crewmate : This is almost perfection. A Cheese casing with more cheese inside.

Captain : Yo Dawg, I heard you like cheese. So we put cheese inside your cheese. So you can have cheese while you eat cheese.

Crewmate : What the barnacles!! 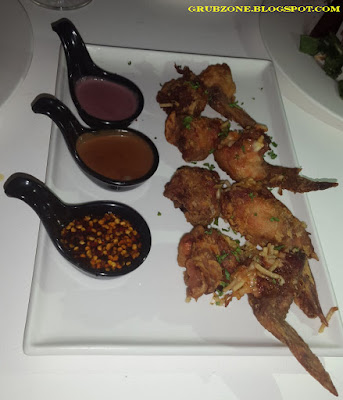 Spaghetti Chicken Wings felt like an item that was perhaps a victim of too many things happening. The item was supposed to have Mozzarella but felt a bit lacking on that part.

If one has to analyze the appetizers, I would say that EPL worked well for Italian delicacies but fell short on the foreign ones.

I eyed the servers as they brought in the main courses which were dominated by Pizza. My joy knew no bounds, after all what is an Italian place without the pizza?

Biancaneve is a very special name. Translating to Snow White in Italian, this pizza certainly lived up to its name. Its looked like a regal white monarch crowned with a Tiara of Arugula(Rucola) adorned by ruby like cherry tomatoes. The salty creamy Mascarpone provided comfort to the taste buds. It was enough for them to swoon over it akin to young women in a rockstar's concert.

The truffle oil proved to be a better ingredient than pure olive oil as it provided a savory undertone that brought out the flavors of everything else. The Parmesan flakes added to the whole experience by providing a different kind of saltiness. The pizza was the best amongst the trio of pizza served to us. And this comes from a person who usually avoids vegetarian pizzas.

Captain : Oh-my-Bianca, make me happy, make me complete, give me the joys of life.

Crewmate : Is that your lady, Cappy?

Captain : No its my pizza. 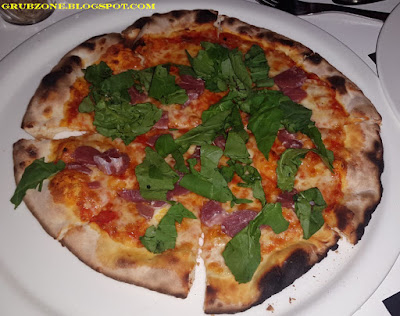 Prosciutto e Rucola felt like the Star Batsman who went out for a duck. Although, Proscuitto ham is supposed to be served thin, the ham slices used here were ultra thin and too few in the pizza to make an impression on the flavor. The flavor was largely dominated by the Arugula leaves which did not make it a good affair. 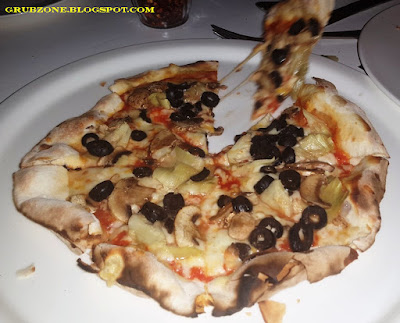 Capricciossa in some ways resembled capriccio music. It was simple yet liberally made. This scrumptious beauty was packed with artichokes, mushrooms, olives, tomatoes in a lava of the softest mozzarella cheese ever. The thin slices with cheese flowing over them provided treat to both the eyes and the tongue. EPL has to be the Eden for vegetarian pizzas.

I was full at this point and had to miss on some of these lovely delicacies. 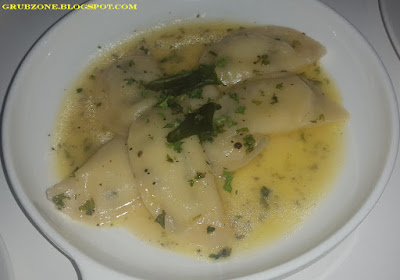 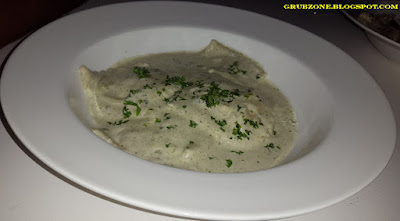 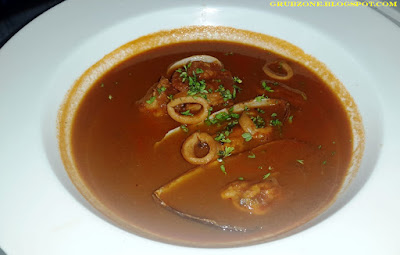 But my appetite was resurrected as soon as I laid my eyes upon the dessert. Chef Davide had been very persistent upon all of us waiting till the very end. And I am glad that we listened to him. 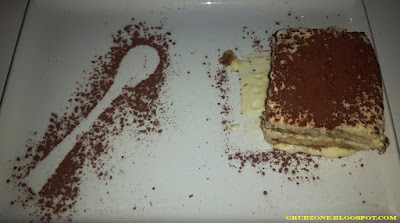 There is no spoon.
Davide's signature Tiramisu had an appearance that looked straight out of a Masterchef contest. The color, aroma and the appearance of the Tiramisu was perfect by text book definition. Made with real Mascarpone cheese, ladyfinger crumbs, coffee and cocoa, this was the paradigm of a true Tiramisu. Have a bite and fall in love with this Italian masterpiece. You will never want to eat Tiramisu from anywhere else again. If you are a dessert traveler who would travel far and wide for the best, do consider a trip to EPL. 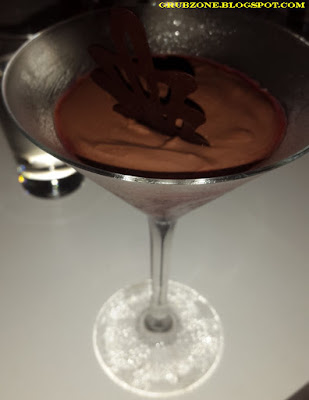 Chocolate mouse with Mystery Jam - The Tiramisu was amazing, there is absolutely no question about that. But the show was stolen by this simple looking Chocolate mousse. This dark chocolate delight felt like an oddity straight from an Enid Blyton book. The rich and dense Chocolate liquor felt like a heavenly elixir and then at the bottom was a strange red glaze. At first bite it tasted like strawberry jam making it a Choco strawberry mousse.

But upon digging even further, one found that this jam was actually a mixture of strawberry and chili. Hence sweet with a bit of tongue tip heat could be the best sensory description for this. I could have written Chocolate mousse with Chili strawberry jam at the start but that would have ruined the mystery ha. This mousse was strangely addicting especially with the chili.

Captain : Oceans of chocolate around me.

Captain : Deep within is the fabled strawberry.

The staff is well informed about all the goods on the menu. They even pronounce the goods with an Italian accent. The whole experience was reminiscent of having fine food by the pool in a classy five star hotel.

The pricing is variable. For some grub options it may feel taxing but for its excellent desserts and pizzas its quite value for money. For an overall four course experience, EPL may actually be cheaper than most fine dines in the city.

I will say it as many times necessary. The evening was amazing. Eat Pray Luv had the finest grub compared to all of my previous Roof top dining experiences. In fact, its tranquil and cool atmosphere was almost inspiring. I would love to visit EPL again.

"Eh you greedy scallywags, stop lickin' your dessert cups and spoons. A fine wind blows our way and we have rough winds to sleigh. So raise the flag, grab the ropes and lets sail away."


-I was invited by the EPL team and Disha Kotak to sample some of Chef Davide's delicacies. Special thanks go to Jay Dhawan who passed me the invite. And to Chef Davide for being such a great host.-

Posted by Rishabh Mittal at 4:07 pm