The weather looked devious and the rain would come and go. The sky was grey and the waves were rough. Most of me crew was in the lower decks as I and a few of the lads steered the ship in the storm. The roar of the thundering wind and the angry waves was almost deafening and we longed to find a sanctuary to get away from the inclement weather.

Suddenly the lookout rang the bell ferociously. And I got out me looking glass to see what he was pointing at. At first it looked like a light house in the middle of the sea but it turned out to be a small island with a tower. Whats more interesting was that there was a restaurant at the very top of that tower. Sanctuary and Grub.

The Gods of the sea were gracious as they led us to Terra. 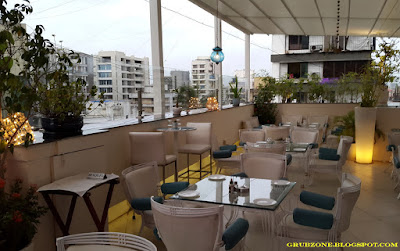 The Mumbai Zoman community is trying to catch up to some of the more buzzing Zoman collectives in London, Delhi, Bangalore, Kolkata and even Pune. What better way than to host an event in a chic Mediterranean themed cafe on a rooftop? And one of the many Zomato invitations managed to reach tis' Captain's humble mailbox. Terra was an Terra-fic name and enough for me to make the voyage. Onwards to Terra. 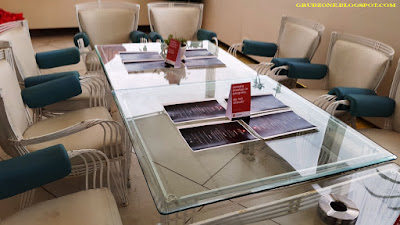 Imagine arriving at a concert and you find yourself seeing an incomplete stage and the organizers working out on issues. That is what I felt when I stepped in. But then, imagine if time passes quickly and suddenly you are in the middle of a buzzing concert. Was the first part just a dream or did the place Terra-form? As the sun went down and darkness descended upon us, the Cafe started looking complete and quite pretty too. Welcome to Terra...in the sky. 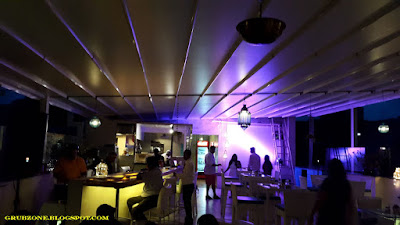 I am a person who loves lighting, the feel, the romance and the energy in the air. Cafe Terra seemed like a cool place who had these all. The music was perfect and I was a bit surprised to see an old man who would better fit into the shoes of a stereotyped office boss mixing the music. But eh, he totally brought the house down. Perhaps he was the Guru or the big Daddy-O of many a young DJs. While the daytime appearance was compared to Greek and Mediterranean Islands by a few, the night appearance definitely resembled a North Goan club. It transformed from a quaint cafe to a party zone in a matter of minutes. 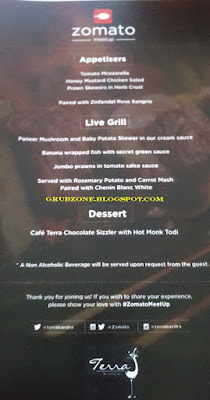 The event had a special menu which felt a tad bit restricted but eh it had a few hits of its own. 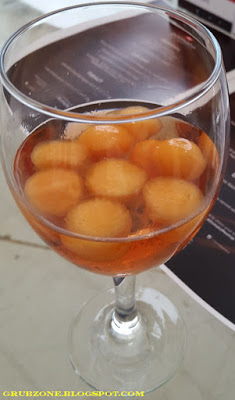 The Zinfandel Rose Sangria was a mystery mix which had Wine, Vodka, Melon balls and some other unknown ingredients. Rahul Rohra, Terra's owner and a master chemist of fine cocktails refused to divulge the secrets of this tangy and potent mix offering his smile as the only consolation. Its color was quite intriguing being very atypical of the usual Sangria. I held my glass high and looked over the city as man made lights grew brighter. To prosperity and Mumbai. 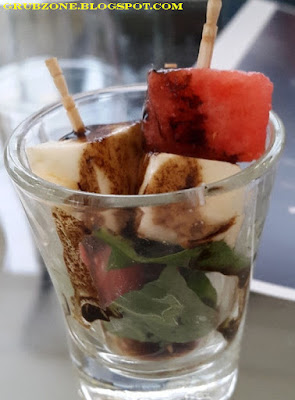 The cocktail was a nice start to the sun downer event and seemed to go well with the Feta-Melon (with basil and a drizzle of Balsamic reduction) skewers. It built quite an appetite. 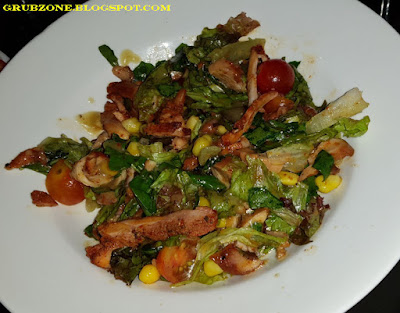 The Honey Mustard Chicken Salad was perhaps one the best Chicken salads that I have had. While the greens were in abundance, the chicken was equally abundant as well. One too often does one find places going scrooge on the chicken in such salads. The sweet honey mustard concoction stuck to the chicken giving it a mix of a savory and candied kind of sweet flavor. Even the lettuce and corn felt rich with the liquid. Never have I found myself being a glutton for salad. This mix would please both Popeye and Wimpy. 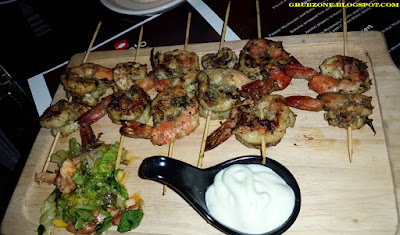 Prawn skewers in a herb crust was perhaps the finest attraction of the evening. I am not a big fan of prawns but every once in a while some chef manages to make a Prawn lover out of me. The herb coating added a very savory snackilicious feel to the prawns. They were tender and juicy. The provided dip did not quite augment the already superior taste so it felt redundant. This item paired quite well with the Zinfandel Sangria.

Captain : These would make a nice snack with me grog.

Crewmate : We could smuggle a barrelful aboard the ship.

Captain : But that would last only a day at best. 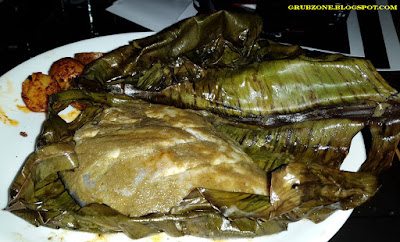 Banana Leaf wrapped fish was apparently Pomfret cooked inside the leaf. Though, I am not fond of fish with scales but disregarding that I felt that it was wee bit unnaturally salty for my linking. 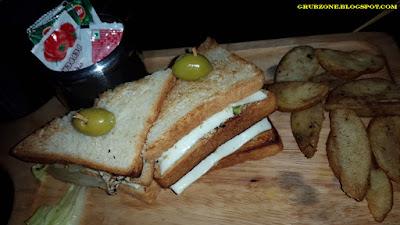 Epic Club Sandwich's naming felt akin to calling a river a great sea. It was delivered considerably later than fashionable late and as a result had become quite cold. The bread was not uniformly heated as some parts felt soft while some others hard. The flavor very much resembled a run of the mill chicken mayo sandwich that I have had in Monginis and smaller establishments. 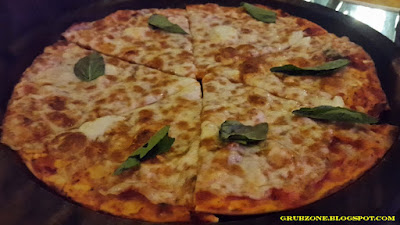 While strictly not a fan of Margherita Pizza, this was a reasonably good pie with a nice thin base and an addicting type of savory flavor. The cheese was generously added and the pizza felt light and tasty.

Captain : This is tasty but could have used some meat.

Crewmate : It feels a bit barren Cappy, a few more veggies could have added more color.

Captain : A bit of meat would have added more fun. 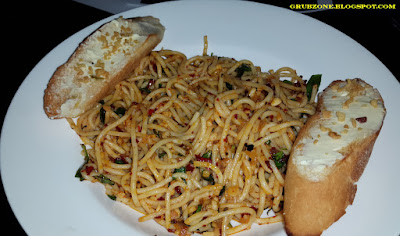 Aglio e Olio Pasta was not a part of the event menu but somehow found way to our table. There is a difference between spaghetti and noodles. And I felt it tasted less like the former and more like an instant noodle mix. Needless to say, it didn't find any fans across the table as it left the table looking mostly the way it was served. 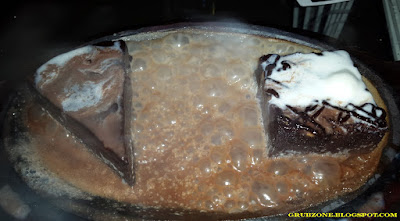 As the evening came to a close, we were served the dessert. Terra Chocolate Sizzler with Hot monk Todi felt and tasted like an average Sizzling brownie. For some reason the brownie felt a bit hard and crumbly despite being drenched in sauce. But what changed the perception of this fella from a loser to a winner was the addition of  "Hot Monk Todi". Akin to an ordinary Saiyan going super.

Served in shot glasses, this liquid paired excellently with the brownie. Perhaps their pairing was as good as Shashi Tharoor and Twitter. I am not entirely sure what the liquid was made out of and as usual Rahul offered his "main nahi bataoonga" smile. I felt that there was some cinnamon and clove in the formula, but that's all I could feel.

Captain : Well you can have mine too.

Crewmates : Really? They go so well with these Todi shots.

Captain : What Todi shots? Wait? Were they served with a secret elixir, lad?

Crewmate : I will never tell.

The service in Terra could use work, lots of work. The servers were slow and ill informed. They had to be given several reminders on some of the things. And a lot of things arrived cold. It took them half an hour to get me a fresh plate as I used my hands till then to substitute the same in a MacGyver fashion.

Since this was a meet for Zomans, the tab was taken care of by Zomato and the house. The menu pricing suggests par pricing with most Restropubs in suburban Mumbai.

As I look at the experience, Terra had an amazing ambiance. The city view was fantastic and I loved the lighting work. There was a bit of a "rain water coming in" issue but that seemed more like an ironing issue that they can take immediate care of.

In jest, I'd say that the place though named Terra had a bit of the sky and water to it as well. The appetizers and drinks were amazing but the mains served felt like they needed more love. Would I visit again? Definitely - there is a lot on the menu to be tried so tis' Captain has marked the place on his map.

"The weather is getting worse and the tavern's closing lads, we have no choice but to get back to the seas. All ya well fed mateys, on the sails immediately."

-I was part of a colorful discourse over food organized by Zomato for the Zoman community. The grub was on the house. Special thanks go to Kaiarsh, Rahul and Zomato-

Posted by Rishabh Mittal at 6:24 pm