My ship was sailing in me favorite sea lane in these parts of the ocean. In fact it was a canal where there were grub installations on both sides. Taverns, Cafes , Restaurants and water holes. Half of me crew members were on the starboard side staring at places with hungry eyes and the other half on the port side swooning about the cookhouses. And I was pretty sure that the look out was asleep, like always.

Suddenly me eyes spotted a Chinese lad in an old wild west attire shouting random Spanish phrases. "Was he crazy?", I wondered or perhaps this was part of something more subtle. I looked at a signboard above that lad and it said "Loco Chino" which finally made sense. I made up my mind, we were going to dock near the canal walls and have our grub at Loco Chino.

Loco Chino or Crazy Chinese in English is a Chinese-Mexican restaurant chain that has been around for a while. I have always associated it with the suburbs so it was pleasantly surprising to find a recently opened outlet in downtown. It is slightly away from the mainstream of the Kala Ghoda scene, located opposite the One Forbes building. But it should be easy to find as one cannot miss the huge building unless dead drunk. 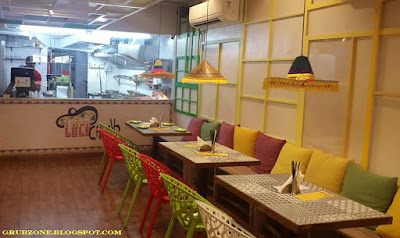 The interiors of the restaurant are quite reminiscent of cafes or bistro sized pizzerias. The place seems to target a young audience with its casual and playful design. Apart from the humorous mustached mirrors and hat shaped hanging lights there was no other Chinese or Mexican feel to the ambiance.

Since the place is new, they had sent a bunch of invites to food bloggers and reviewers. One of those invites managed to land in my mailbox. Thus the staff had served a special food set to me. 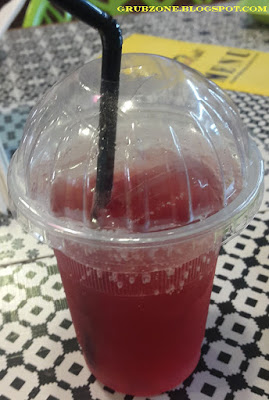 The day was hot and the Mexican Twist untwisted my thirst. Made with a mixture of Cranberry juice and non alcoholic Triple sec, this was a tangy, zingy and a refreshing drink. I quite liked it. There was just one problem with it. As the drink crossed the half way mark, it started tasting watery. This was a bit of a put off to the initial experience. This bit needs to addressed. 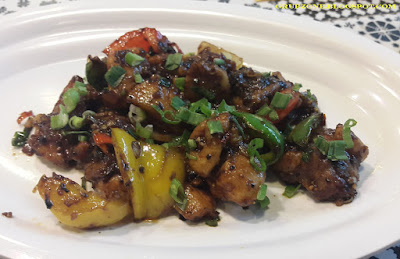 Black Pepper Chicken was a scrumptious appetizer. The sauce supplied ample savory and spice to the dish while the greens providing a depth to the flavor. The chicken pieces were tender and juicy. The preparation had a lovely aroma too. The serving in my picture is only half of what they serve. I had requested the staff to downsize the portions so I could sample more grub.

Crewmate : Yes, I can see that. You almost ate yer cutlery Captain. 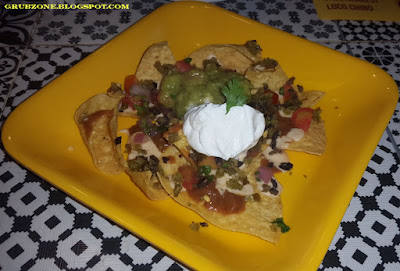 Veg Fiesta Nachos were average. The Sour cream had a salty flavor to it making it feel a bit odd. The tortilla chips were close to genuine but I suppose that I have grown to expect a little cheese powder on my Nachos Tortilla chips. 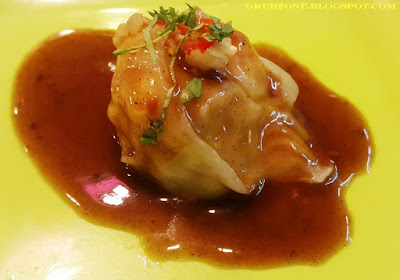 Spicy Smoked Chicken dimsum may not have tasted authentically Chinese but it was aromatic and quite delectable. It was the tallest among the dimsums served. 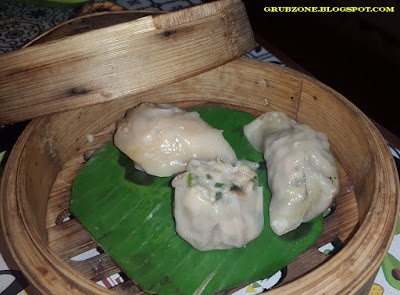 Presenting the Three Dimsum Amigos. Yes I can use a Spanish term for Chinese food at Loco Chino.
Look at the basket from right to left. Though their color and texture appears to be the same, they are shaped differently.

The Crescent shaped dumpling is the Kaffir lime coriander chicken dimsum. It was quite an amazing experience since the flavor was predominantly Kaffir lime with the subtle meatiness of Chicken. It did feel though that the Lime was applied after the chicken's cooking rather than with it, but I am not complaining. This was quite an unique dimsum, one that I can have a whole platter of.

The next one is Siu mai as you can guess by its shape. I wasn't that happy with this since I believe Chicken does not work well in Siu Mai and the traditional pork Siu mai is the best.

And the last one was Chicken and Prawns Xo. Xo is a sauce that adds a bit of spice and and a whole lot of depth. This dumpling felt a bit tangy as well. The flavors of Chicken and Prawns had fused to form a single composite flavor thus the proteins had been married properly. Its taste stood out and kept me intrigued.

Captain : Three Dimsums and two of us. How do we divide the booty?

Crewmate : Well you gobbled the smoked chicken dimsum so I should get two from the platter.

Captain : Fine you can keep the Siu mai. 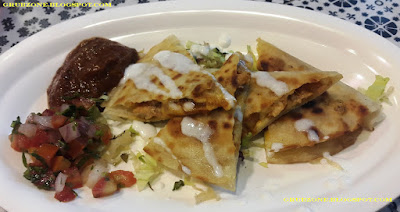 Chili Con Carne Chicken Quesadilla was not the best Quesadilla that I have had but its spice and tanginess gave it a very interesting and an "active" flavor. I think the best way to describe this would be to compare it with a superstar actor who hogs most of the screen time. There wasn't a single moment when the flavor wasn't keeping my taste buds entertained. The only improvement I can suggest for this is a slight addition of cheese. 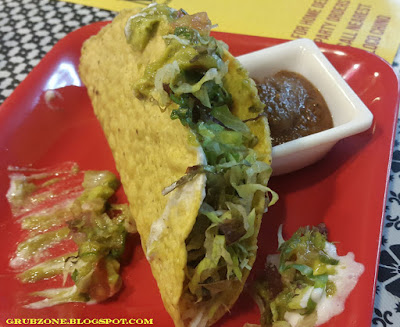 Grilled Serrano Chicken Taco was a contrast to the Quesadilla. If the above was a Rajnikanth or a Stallone then this was more of a Irrfan Khan or Michael Douglas. The flavor was passive which felt a bit strange for Serrano chicken which is supposed to be based of chili, cilantro and lemon. The greens also felt excessive for a chicken taco and perhaps they offset the flavor that the Serrano chicken may have contained. 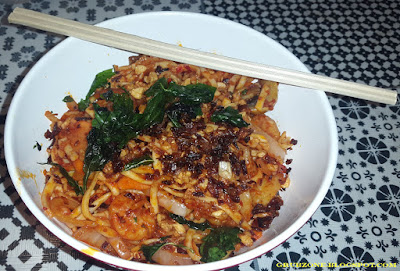 Walk to Wok is a special make it yourself Wok option where you fill in a sheet with what you want in your noodles. Loco Chino's wok noodles stand above most Make it yourself Wok installations. I made a wokwork of Udon noodles, Prawns, Hot Garlic etc. The noodles felt quite fulfilling and rich. The serving size was proper in this case and it was more than generous. At INR 250 The seafood wok seems to be aptly priced. The flavor was strong on garlic and it seemed to sync well with prawns and udon.

Captain : This is too much.

Crewmate : I agree, we could have invited a few more mates to finish this with us. 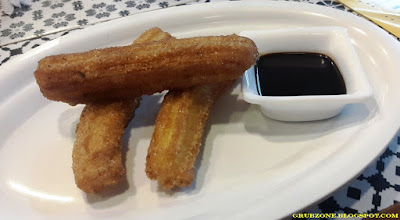 Churros were a downright disappointment. The flavor felt quite lacking. These were a bit crumbly inside too breaking very fast when dipped in the chocolate sauce. This made it hard to dip them in the chocolate without the need of Churro fishing in a chocolate pond.

The service at Loco Chino is ample and decent for now. They are professional, groomed and well informed on the menu. They have a large crew and constantly take care of you. Would be nice if they maintain this standard.

The pricing at Loco Chino is a bit of here and there. Some items feel like a steal, while some feel pricey. While most food is well worth the moolah given the generous portion sizes, I do feel that veggie folks may find their prices a tad bit on the higher side.

Loco Chino makes a fine choice if you have a Mexican craving or the fast food type of Chinese needs. Its also a good place to dine with friends and office mates. But being located in the Kala Ghoda area, it certainly needs to tighten all screws to stay competitive with the other grub zones in the area.

"Yer bellies suggest that ye lads had yer fill. Better not be sleepy though, we have a long voyage ahead of us. Until next time. Cheers."

-I was invited by the restaurant's PR to sample the grub.-

Posted by Rishabh Mittal at 6:47 pm