This was a clustered little island and there were more ships docked here than the fish in sea. All right, maybe I am blowing me tales a bit out of proportion but this seemed like a really crowded part of the sea. I held in me hand a little prize of a document. This document was given to me by some folks that I had ferried across the oceans. The document granted me free passage in a place called Sky cafe. As me lookout surveyed the place, he disappointingly admitted that he cannot spot Sky Cafe. I gently tapped his daft head and told him to look up because its a Sky cafe. Finally we found our destination. Sky Cafe was located on top of an old industrial tower

Vegetarian and Continental are two words that do not usually belong together and for a long time restaurants have fed us with Indianized Veggie versions of European delicacies. Being the naive bunch that we are, we immediately proclaim that as amazing food. However in recent times, a few restaurants have done extensive research and groundwork to create vegetarian food that actually tastes European. Sky View happens to be among those chosen few. 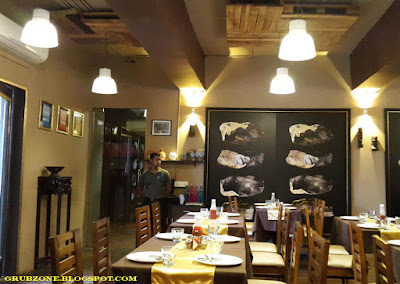 Sky View Cafe resembles a small sized casual diner with its family themed tables. The lighting colors the ambiance golden and the place resembles an aristocratic club. It is the kind of place that makes one feel comfortable and one could eat for hours to come.

I was greeted by the friendly manager Frankie who gave me the best seats in the house. 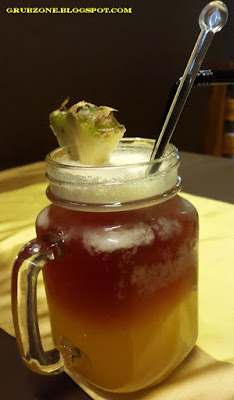 It was a hot day and I was quite thirsty. Pesca Blast was quite a relief. The flavor was dominated by Pineapple with a strong aftertaste of peach. Cranberry's tart flavor was a bit overshadowed by the pineapple. There was a hint of lime as well. 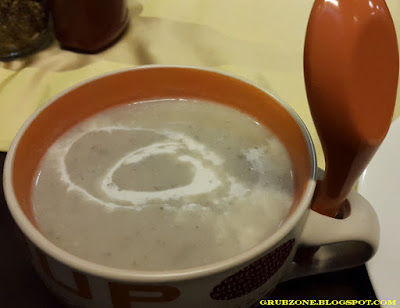 I started my meal with The Real Mushroom soup. It visually appears very ordinary and would disappoint all those colorful folks who swear by foodporn. But its taste is another story. There is a beautiful and a flavorsome depth beneath that surface. The flavor is salty with an intense taste of cream. Mushroom pieces add a bit of depth with their naturally earthy sensation. The aroma is heavenly and appetizing. I lapped up this soup faster than a hungry cat on a bowl of milk. 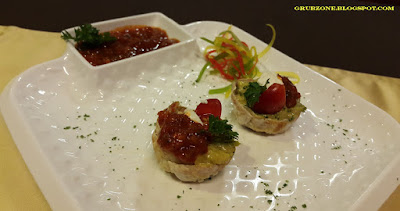 One has to admire a restaurant when it goes beyond the same old Onion rings and Garlic bread as appetizers. The Zucchini feta bites were made out feta cooked with bits of Zucchini in a Canape cup. It was topped with cherry tomatoes, spices and some home made salsa. The flavor was quite snacky and I could easily down a few plates of this without noticing. 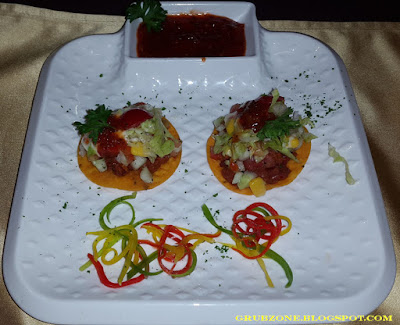 Mini Mexican Tostados were colorful nibbles with an intriguing mix of flavors. The Corn Tortillas below were laced with a bit of powdered cheese and had a savory flavor. The Mexican beans and greens provided a slightly salty and savory taste. The Mexican spices were subtle adding a hot undertone to it. The plating was also executed in an enticing manner. 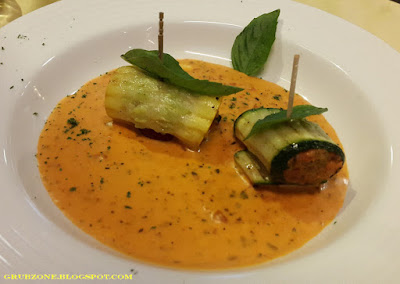 Squash Roulade was perhaps the best item on the appetizer's menu. This was a paradigm of a Western delicacy being transformed into a fully vegetarian counterpart. In fact, I will go as far as saying that this was better than all the Chicken Roulades that I have had so far. The stuffing was made of ricotta, broccoli and baby corn in a cigar like roll made out of grilled Zucchini. The bath below was made of Ricotta and herbs and added a pleasantly salty and a cheesy flavor. The liquid's taste mimicked that of the cheese used in Cheetos. This was quite an amazing dish and everyone should give this a try unless if you are vegan.

Captain : Barnacles, I am just enjoying me adventure on the other side. 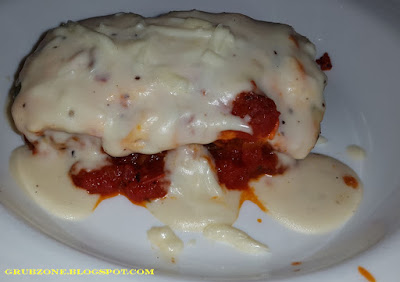 Vegetarian Lasagna followed the theory of constructing a multi layered lasagna to the book. There were several pasta sheets as required. The cheese felt nice and the chef had even mimicked the color of its meaty sibling. I would also say that it tasted remarkably better than the vegetarian Lasagna variants that I have had elsewhere but this paled in front of the other offerings at Sky View. It felt a bit unauthentic as far as traditional lasagna goes. The taste was very much Indian and similar to baked vegetable layered between Lasagna sheets. 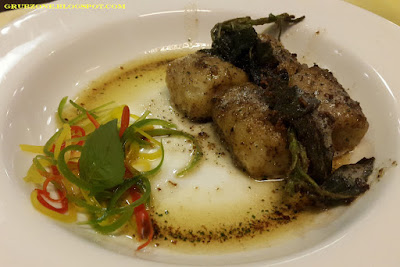 Gnocchi with lemon butter sauce was a visual treat though it may initially be slightly unsettling to a devout vegetarian. The dish was a simple craft of high grade Gnocchi dumplings tossed in a lemon and butter sauce. The dumplings melt in the mouth and taste excellent with the butter sauce. However, the critical error with this dish was the lack of tarty acidity. Lemon was used but its effect was far too subtle to be enjoyed and as a result the sauce felt to be mostly molten butter. 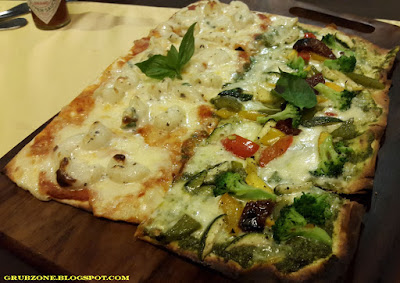 Square sheet pizzas are a new trend now days. And this pizza certainly offered a visual uniqueness from the circular delights that I have grown up with.

Mac and Cheese Pizza on the right was a flavorsome pizza though could have used more cheese.

The Veg Pesto Pizza was a delightful pizza flavored with basil and pesto. There was Broccoli, Sun dried tomatoes, Bell peppers, Zucchini and more Broccoli. 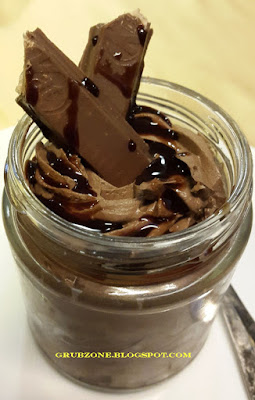 Chocolate Mousse. I am not a big fan of Eggless Chocolate mousses. They feel a bit chalky and require a lot of effort by chefs to cover up for the obvious lack of eggy richness. But hold the presses, this one is remarkably different. It is a rich mousse with a dense consistency. The chalkiness is at a bare minimum and is mostly patched over by the gooey Chocolatey goodness.

The Chocolate sauce's drizzle added a slightly bitter undertone which aided in its emulation of a true mousse. This mousse was also loaded with Kitkat bars which I admit looked pretty, just that I think these should not have been used in the center as well. Kitkat's flavor clashes with the mousse's inherent flavor.

But I'd still score this a eight on ten. It was a great dessert. A perfect vegetarian mousse.

Captain : The legends of the deep have it that beneath all that sea of chocolate lies a treasure of kitkat.

Crewmate : But Captain, I see a kitkat sticking out at the top too.

Captain : Lad, that be just the tip of the ice berg.

The service is excellent as most of the servers are well versed with the menu and extremely professional. They also entertained all of my quirky requests sportingly.

The pricing is tilted on the higher side of the scales but the quality mostly is worth it. The portion sizes are decent and the quality of ingredients is great. Thus good price for good quality.

I think all grub lovers should give this place a chance. If you are a vegetarian then this place should definitely be on your road map. They have created near perfect emulations of continental grub that is traditionally made out of meat. If they can please a carnivore like me, then I am pretty sure that they will please vegetarians.

"Oi, you greedy urchins better be done lickin' your Moussey fingers. Its time to leave for our next destination. And our Voyage is only getting started."


-I was invited by the restaurant to sample a special menu.-

Posted by Rishabh Mittal at 9:19 pm