It was a dark misty night and the seas were rough. These conditions be treacherous for any ship at the high seas. The crew was extra alert, not a lad out of place. Suddenly out of the dark mists, a brief flash of light caught our attention. I immediately changed course towards the light. As we moved into the unknown, the flashes grew brighter and brighter. Any experienced man at sea knew what this meant. There was a lighthouse nearby.

As me ship pushed though the mists, the view became clearer. There was a small island in front of us with a lighthouse in the middle. The lookout sounded confused when he claimed that there was a tavern right inside that light house. This was enough to arouse me curiosity as I asked the fellas to look for a good spot to dock at while the landing party prepared to explore the island. Tavern inside the lighthouse? Fascinating. 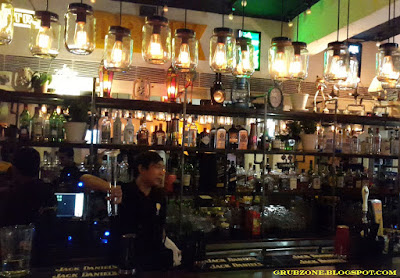 The nice folks at Zomato remembered good ol' me when they were organizing a meet up for epicures at Light house Cafe. This cafe is more of a pub or a tavern if one has to strictly go by the appearance. The most prominent part of this small sized restaurant is the bar. But a small obscure counter adjacent to the bar with a loud signboard saying FOOD reassures that there is plenty of grub too. The dim lit appearance is perfect for a sinful weekend binge. 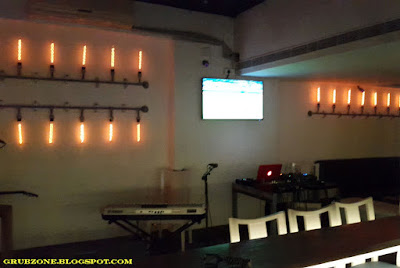 And if that wasn't good enough - There is live Music(Wednesdays) and a DJ too. So much in a little cafe is worth every moment spent here. The vibe is similar to that in a club. Food, drinks, frolic and music to go with that.


The party started with a bunch of house special cocktails. This was a part of their special Beer and Burger's menu. Some of these cocktails were made by the fellas at the meet up themselves. Fun for us to be honorary bartenders(though lousy), I reckon.

Caribbean Mix was undoubtedly my first choice. If you have to ask why then you are not reading enough of my works mate. This was a beer cocktail mixed with Vodka, Malibu, Coconut water, pineapple and some Tabasco. The flavor was sweet to start with. As the tongue bathed in the drink, the flavor of the coconut which was somewhat similar to that in Bounty Chocolates emerged. And as the drink went down me passages, a strong tangy-spicy aftertaste could be felt. This definitely got my spirits up.

Captain : No, let me enjoy me drink. 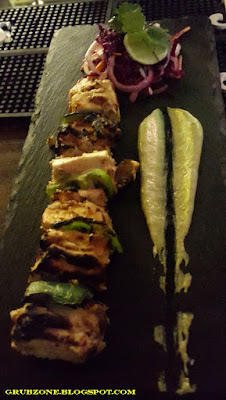 The Paneer Kebabs and Murg Alishan were savory snacks that went well as bar nibbles. The chicken in the latter was a tad bit rare but the taste was great.

The mains were greasy, messy and scrumptious burgers. These felt very much like real burgers as opposed to the basic dumbed down burgers sold in most run of the mill places like the ones by a clown and a king. And as this was a Beer and Burger festival, I was told that the line up was a special edition menu. These huge burgers were quite heavy so I could not taste em' all but I did enjoy what I could grab. The place would make a great spot for a burger lover. 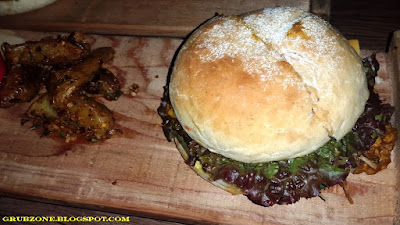 Bengal Fata Fati was a messy burger which tasted much like homemade Tariwala Chicken. I suppose Bengali homemade chicken and Punjabi homemade chicken have a similar flavor. The mayo in the burger was mixed with a Bengal mustard chili paste and added a twisty zing to the familiar flavor. The wedges were coated with Panchphoran masala which is a blend of spices used in Bengali cuisine. A welcome change as opposed to the overused and over done piri piri mixes. 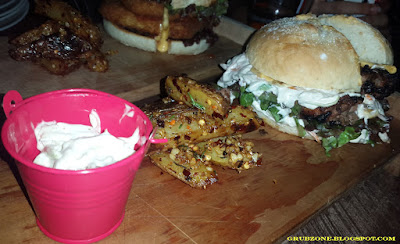 Jerk Chicken Stoner was definitely the best of the burger lot. A spicy and potent Jamaican jerk mix applied to roasted chicken and draped with lots of mayo makes a great burger. It had a great aroma too. This burger was quite messy but if it ain't messy then it ain't fun at all. To play around with names a bit, Jerk Chicken Rocker would have been more apt.

Captain : This burger gave me a high.

Crewmate : Thats why this is called a stoner.

Crewmate : I wouldn't know, you usually eat mine too. 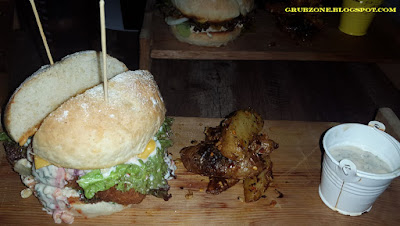 Fiery Punjabin is strangely a pure veggie burger. For folks like me, Punjabi food symbolizes meat and spiciness so this was definitely something, different. This monster was primarily made of a cottage cheese(Paneer) patty with pickled vegetables. The Yoghurt used is billed to be Bondi Yoghurt(Aussie) which I am not sure about. Appears to be a corruption of Boondi Yoghurt ha. 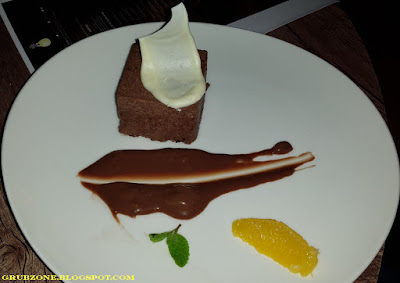 Eggless Hazelnut mousse was average. The liquor was rich but not very dense. It was quite airy from appearance. The major problem with this dessert was the unwelcome addition of hazelnut flakes. This felt like a last minute post work addition and felt very annoying as far as taste goes. I ended up flipping the mousse and slicing a layer off which contained the flakes.

The pricing seems fair for the generous portion sizes served. Most burgers are between 400 to 500 INR which feels fine. The drinks have variable prices. Some feel like a good deal while some feel on the higher side. In totality, the menu is well priced for a burger lover.

The service can be a little slow but the place was crowded beyond belief so its pardonable. The staff was professional in conduct. The bartender was extra polite as he walked us through making drinks and tolerating our sacrilegious mistakes ha. I remember not shaking the drink hard enough.

The evening was great and I can say that the complete package was well worth the trip. The Beer and Burger festival is a limited affair so the reader should make haste.

-The event was part of a Zomato meetup. Food and drinks were on the house.-

Posted by Rishabh Mittal at 6:39 pm