The deep chasm in the sea could hide an entire world below. How can one not go down and explore things? It was very risky of course. If the crack were to close above us, we will be trapped in there. Much against the crew's wishes, a few of us decided to go down there. Firsty decided to stay up and assume command if we were to get stuck down there.

Nina decided to come along as well. Nina has been lucky for us so far. With a rope, we descended down the colossal waterfall that went deep into the chasm. Another surprise awaited us down here.

Gaylord is an iconic restaurant that has stood near the sea at Churchgate since 1956. The world around it has changed but yet it still stands there, popular as ever. Men and women have eaten here followed by their children and their children's children. The restaurant has seen struggling artists who later became big producers and directors. It has seen luminaries and much more. I have myself been to Gaylord a few times in the past and the place continues to awe me. 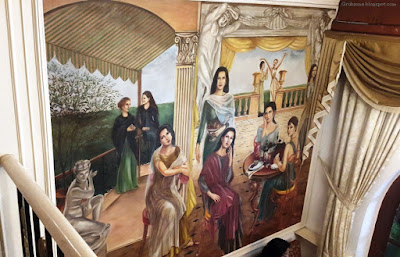 The only thing that has changed in all these decades has been the decor and the menu. But yet the restaurant retains its old world charm. Gaylord which is derived from French Gaillard means high spirited and boisterous. That is true in some sense since the restaurant does instill its patrons with high spirits. 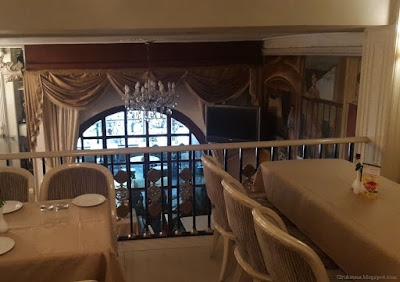 The restaurant decor feels like a mix of Royal Indian and Victorian. It has inspired many restaurants who have unsuccessfully tried to emulate its interiors. The restaurant has both an indoor dining and an al fresco exterior. The exterior area though can be a bit harsh in the summers. One can host their wedding party here, a corporate dinner or just have a fun time with old friends. The place seems to suit all occasions. I was here as part of a blogger's table to witness the launch of a new Menu by the restaurant's executive chef, Zaheer. Do note that Gaylord has a very large and diverse menu, what I sampled was but a small part of the menu. 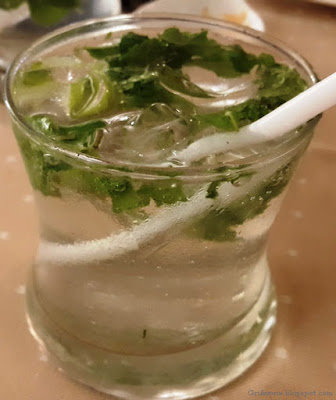 Bartenders Special Cocktail. The summers are chaotic and one could always use a pacifying drink. I started with this drink which was a customized cocktail made of gin and vodka. It had a strong kick and citric notes. It resembled the mojito a lot and could have done with lesser leaves but it had a great flavor and a potent kick. 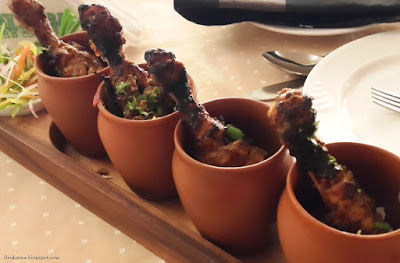 Kulhar ki Tangdi were chicken drumsticks served in faux mini earthen pots. This was a neat way of presenting Tangdi kebabs, I assume we will see copycat versions in other restaurants soon. The flavor of tandoori barbecue was strong in these and the taste was very rustic. Combined with the minty chutney at the bottom of the pot and soaked onions, these provided a great kebab experience. 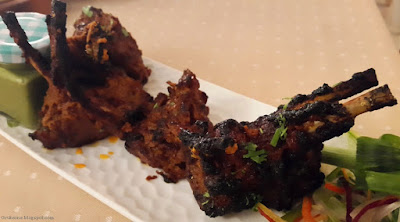 Chaamp Taajdar are classical North Indian Mutton ribs. Gaylord's version was marinated in a mix made of yoghurt and Indian spices. Those flavors could be felt in every bite. There was plenty of meat on the ribs which came right off the bone. The smoky flavor combined with the smoothness from the yoghurt and the explosion of spices made the Taajdar a treat for the tongue.

Captain : What is this? A town at the bottom of the pit in the middle of the sea?

Quartermaster : I am as amazed as you are.

Captain : How the hell do they even live in here? Doesn't this place go underwater when the chasm closes?

Townsman(eavesdrops) : You fellows seem to have descended down for the first time. Look above you. 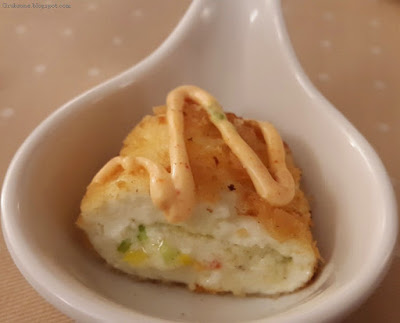 Dahi Cheese Rolls were vegetarian kebabs which oozed a cheesy curdy flavor. These kebabs were a mix of savory and tangy. It was something that was bound to leave one smacking their lips. These also had a pleasant aroma and were well presented. 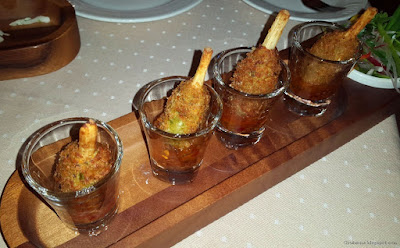 Kulfi Ke Kebab used an atypical spice mix which may not please the palates of some. I am aware of this flavor as I have had it before. The chutney and pickle mixture was made of onion and strong spices and these flavors were very sharp. This is not to say that this flavor is bad but I am one of those who is not particularly fond of it.

Townsman : That's right, the entire town is inside a gigantic geode. When the chasm above closes, the geode's two halves seal tight blocking the water out completely.

Captain : How do you get air?

Townsman : We get enough for a month when the chasm opens up. 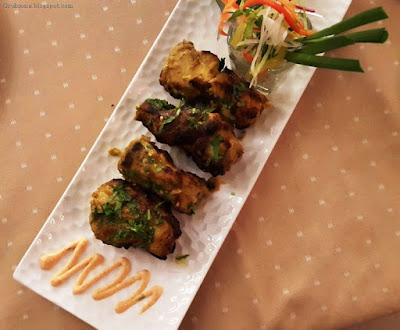 Lasooni Fish Tikka was made of Surmai or King Mackerel. There is something truly magical about sea fish being cooked with Indian spices. These barbecued fish kebabs had a garlicky spicy flavor down to the very core of the morsel and these were seasoned with coriander and other spices on the crispy crust. One of the highlights of the appetizers section, I would recommend these to the reader. 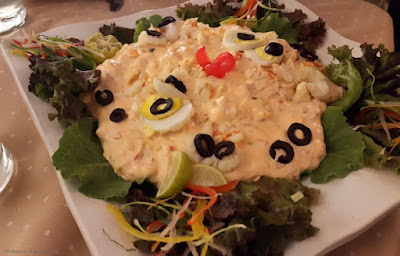 Prawn and Bell Pepper Salad was made of fresh prawns, salad dressings, eggs, olives and a lot of mayonnaise. The salad was really tasty but I suppose the excess Mayo takes away the healthy element. The salad makes a nice accompaniment to the mains. 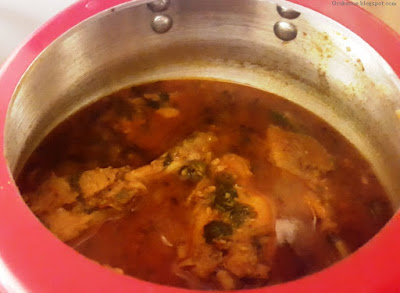 The Cooker ka Kukkad had a very homemade flavor but unlike its name which sounded Punjabi, the flavor felt closer to chicken made in homes in Uttar Pradesh. The flavor was rustic and comforting. Nothing fancy other than its plating method. It was served in a little red cooker.

Captain : I do not get it, where does the ocean's water go to then? Should the town not flood when the Geode opens up.

Townsman : It takes the outward currents back to the ocean. The sea water constantly leaves as it enters and hence does not flood. At most portions of our town are hidden by curtains of gigantic waterfalls.

Captain : This is beyond comprehension.

Engineer : I agree but lets leave that for a novel length book. 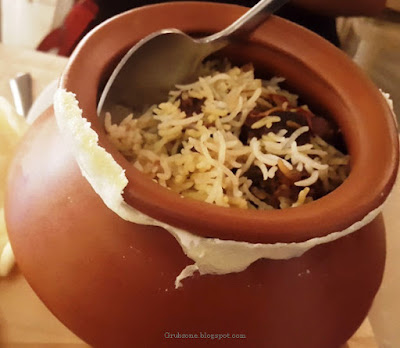 Mutton Dum Biryani was made using the traditional Awadhi style. The flavor was packed and enhanced by the use of a roti seal on top of the pot. The meat was tender and succulent. The rice was aromatic and delectable. This was the kind of Biryani one serves to impress their guests. Tough deal? Serve the client Dum Biryani. Opposition parties disagreeing on a bill? Serve them Dum Biryani. Girlfriend playing hard to get? Serve her Dum Biryani.

Hanky Shanky Korma chicken. Its queer naming aside, this tasted much like the delectable Chicken Amritsari Tariwala made in most North Indian homes. It had a soul pleasing tomato based curry with a delectable and strong aroma. Like most home cooked dishes, it evoked a feeling of simplicity and peace. Best enjoyed with Butter Naan or the humble Chapati. 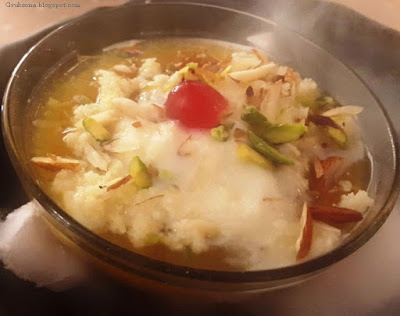 Khumani Ka Meetha (Apricot's sweetness) is also known as Qubani Ka meetha in Hyderabad. This was a variant of the famed Hyderabadi dessert. It was made of moderately aged and dried apricots, other dry fruits and a treasure trove of sweet spices. Sugar, Spice and everything nice may not give the Powerpuff girls but would surely give a good Khumani ka Meetha. A nice all-Indian dessert for the summers, this makes a tongue pleasing end to a lavish meal.

The service was very professional and the older servers seemed to have the experience of time to their side. Chef Zaheer himself visited the table to take feedback on the dishes. I also met Mr. AN Malhotra, the 87 year old CEO of the restaurant who is said to visit the restaurant every day.

The pricing seems apt for the quality and the restaurant's location. It may feel on the higher side but the food and the experience is guaranteed to be worth the moolah.

This isn't my first trip and would certainly not be my last trip to Gaylord. I would hope to continue visiting it in the future till if I have sampled everything from the menu. If one is in Mumbai and loves good food then Gaylord is definitely one of the places that one must visit.

"
Captain : We should leave before the Geode closes up. Its probably due to some weird seismic activity or sea magic.

Townsman : Don't worry. Even if the ceiling closes, we have a network of cave passages that lead us to the surface island. We actively trade with the people above.

Captain : That explains a lot of things. Hey where did Nina go?
"

Posted by Rishabh Mittal at 6:16 pm