The posh neighborhood surrounding the iconic Taj Mahal Hotel and the Gateway of Mumbai is dotted with a lot of big names and famous restaurants. Lemon Leaf, a suburban star which was quite well known in Bandra for its Pan Asian food has now opened shop in the same area. Virtually hidden in a lane behind the Taj Mahal hotel, this place is a Golden Emerald jewel. (Emerald thanks to its Edamame like Mascot and Golden ambiance)

It has three seating areas. One a semi Al Fresco that faces the street, the Golden lit interiors inside and a space on the second floor above. The eclectic mix of furniture makes the place look cosy. Whether its books by Tolstoy near the couch or the counter like tables by the wall, the place has a bit of everything that one is familiar with.

Popping Passion was a virgin mix of passion fruit, cranberry and lemon grass. As the restaurant's liquor license wasn't cleared at this pre-opening event, we had to do well with mocktails. This was a sweet and tangy fruit mix that would be good to quench thirst though nothing more than that. 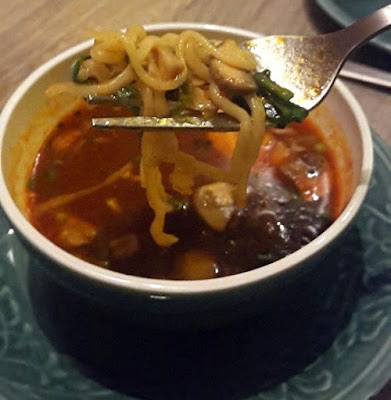 Ramen Bowl with Spicy Broth was a mix of vegetables, tofu, a bit of wakame and chicken. It was a flavorful little appetizer and its taste was a mix of spicy and savory. Though not an exact replica of the real soup and ramen that one finds in Japan, it was a decent emulation that seemed to be adapted to Indian palates. 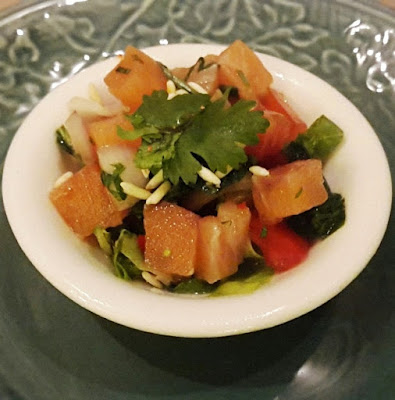 Salmon Ceviche felt much like a sweet and tangy salad. There was no salmon or seafood that I could perceive while eating this hence this was a bit of a disappointment. Its presence on the menu was curious as well since this dish is of Latin American origin but a ceviche derivative called Kinilaw does exist in the Filipino cuisine. 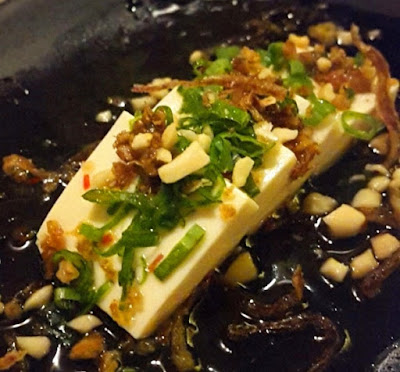 Silken Tofu was a visually alluring dish. It would also please vegetarians but it seemed to have a bit of flavoring issues as it felt very much like regular Tofu. The sauces and garnishes hadn't quite endowed their flavors upon the Tofu. 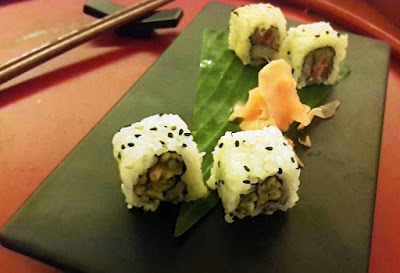 Sushi platter was comprised of two seafood sushi and two meatless sushi. The Tuna tatare was a flavorful California roll with the weed mats being inside. Went quite well with the wasabi.
The asparagus tempura and Dijon Mustard sushi rolls were all right too. May suit a vegetarian well though I prefer my sushi with seafood. 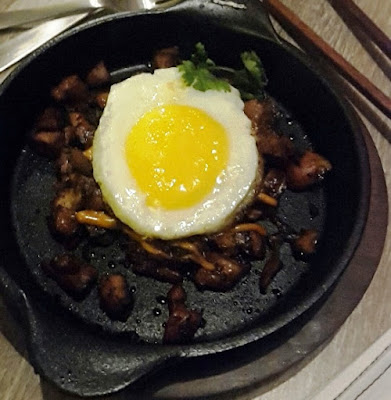 The Sizzling Chicken Sisig was a near perfect emulation of the Filipino delicacy. The chicken was juicy and full of flavor. The egg added a flavor variance. It made a good snack and one must applaud Chef Mitesh for adding Filipino dishes to the menu, a cuisine widely unheard of in mainstream India. Would go well with a Rum based cocktail. 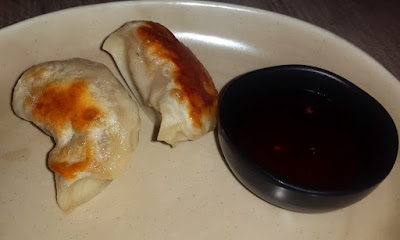 Chicken Gyoza were flavorful Japanese dumplings. The execution was perfect in both visuals and flavor. The batter did not feel invasive and the chicken fillings dominated the flavor. Again like the Sisig, these made an excellent appetizer and a lip smacking snack. 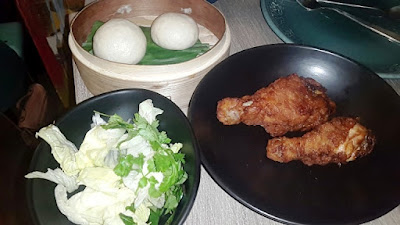 Dakgangjeong or Korean Fried Chicken is a different form of KFC. The appearance seemed to emulate the American Korean snack. Though I felt that the batter was too thick. The flavor was fine. The chicken was less greasy and felt tender. The final chicken was painted with some sauce as well. The chicken was served with Lettuce and steamed buns. While the chicken itself was fine, it absolutely had no combination with the sides. 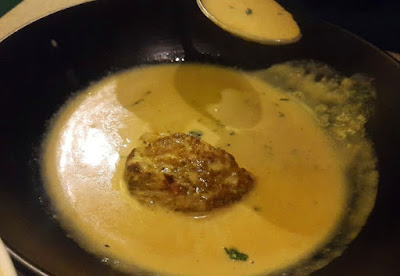 Sri Lankan curry was the dish of the night. The flavors were accurate. The curry had a coastal aroma. The fish was perfect and from the sea as it should be. I am glad they did not use Basa. The flavor made me feel like I am by the seaside. The curry itself had a soul food like flavor and went well with the rice. A must have if you are visiting Lemon leaf. 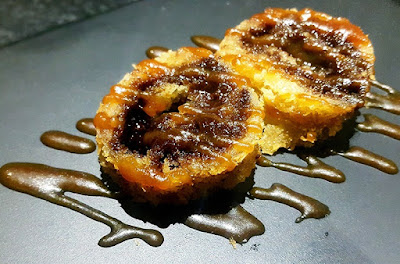 Chocolate Sushi was made of deep fried tempura batter rolls and a pudding like chocolate stuffing. While the batter was better at maintaining structure, I felt that subtly sweet sticky rice would have been better than the tempura in creating a more sushi like feel. The chocolate stuffing itself was decent and this item felt like a nice novelty.

I sadly do not have pictures of their homemade ice creams but their sesame flavored (Yes that indeed is a flavor) was the best of the desserts that I tried at Lemon leaf. I would recommend the ice creams over the sushi.

I cannot comment on the service since it was a pre opening event. The crew seems well trained and professional enough. Some of them are seasoned staff from their Bandra avatar.

The pricing is quite easy on the pocket given its posh location. It is certainly a place that you would like to visit for decent food at friendly rates.

Lemon Leaf has just started its show at Colaba. While they do have boatloads of experience from their stint at Bandra, they still have a lot of work cut out for them in a locality with some of the best restaurants in town. For now Lemon Leaf makes an easy on the pocket option for a decent Pan Asian fare.

-I was invited to a pre-opening event for media personalities by the Restaurant. My review however remains objective.-

Posted by Rishabh Mittal at 6:24 pm