1Tablespoon Pizza(1TBSP) has quite an enigma around its name. Even the restaurant manager did not know about the name's origin. But it does do a good job of sticking in your head owing to its peculiarity. So I think its quite a clever name.

Pizza by the Slice is an interesting concept that was popularized in New York but it didn't quite get into mainstream in India. Sbarros did try a Pizza by the slice concept but they ended up making it look too artificial. This is where 1TBSP has excelled. The restaurant has a small menu but each pizza is memorable.

The pizzeria is a small parlor sized establishment which could be hard to locate if you do not know your way around Todi Mills. Its designed like a quick service/Delivery restaurant and for a pizza place they certainly are quick. My order was served to me within ten minutes of placing it. They have employed a good strategy which keeps the entire process clean, transparent and efficient. The way I see it, there are no delaying bottlenecks.

Do note that while they do have other items on their menu, best stick to their Pizzas because that is what they are best at. If you want to have pastas and the like, there are about a dozen other places in the neighborhood. 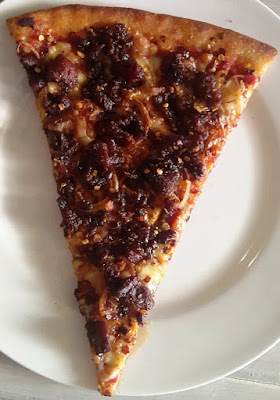 The Spicy Chorizo Pizza was not quite friendly to the camera but was rather amazing to the taste buds. Using the Goan-Portugese variant of Chorizo sausages, this was mildly salty, sweet, savory and spicy.  The sweetness came from spicy honey which gave it an addictive zing. To me, this was the best of the three slices that I tried. And might I add, the slice was quite generously loaded with meat. 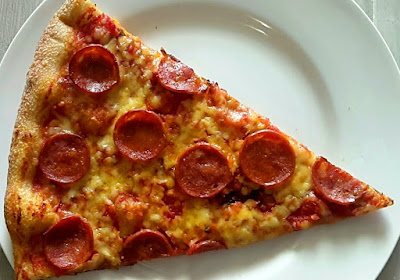 The Americano was a milder pizza or at least felt that way after the spicy affair above. This one charmed the camera and my Instagram is a testament to that. It was generously loaded with American Pork pepperoni. The taste was that of a classical cheese and meat pizza. It is a safe choice for those not into spicy gourmet. 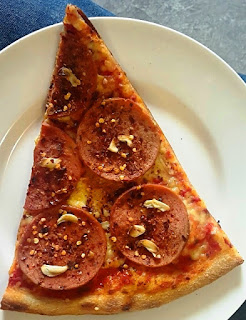 Spicy Salami was a meaty tasting whopper. It had more meat, less cheese and was topped by raw spices giving it a rough texture. The pizza was visually appealing as is resembled popular pizza pictures on social media. Though its named spicy, it is far lesser on the heat content as compared to the Chorizo pizza. A decent pizza if you want a lot of salami and less cheese. It also had a pleasantly earthy and appetizing aroma.

The staff is very professional and the entire process happens in front of you. Since the place is a QSR, service may or may not be offered.

The pricing is easy as far as slices of a 28 inch pizza go. The 11 inch (thin base) full pizzas are cheap too making 1TBSP an excellent place to order pizza from. Its better to order gourmet grade pizzas from 1TBSP rather than to order from the likes of Dominoes or Pizza hut. The pizzas here are far better and much cheaper.

To wrap it up, I think 1TBSP is like the little master - A small restaurant that has some of the best pizza in town. 1 TBSP definitely makes it to my top five pizza places in Mumbai. If you stay in Lower Parel or if you are in the area, do try 1 TBSP pizza. Mumbai may just have its very own Spontini Duomo.

P.S You can call and ask them for directions if you get lost in Todi Mills.

Posted by Rishabh Mittal at 3:25 am