It was a normal afternoon a few years back when I had decided to start food blogging as a hobby. I had been a blogger for many years but food was a new niche for me. I remember myself as always being intrigued by good food and being turned on by food trends. If there was a new flavor of ice cream, I had to try it. New dish on the menu, had to try it. The passion was still unrefined and very suppressed. I remember watching Chef Sanjeev Kapoor's Khana Khazana and "Yan can cook" in the early 90s but that was all the gastronome background that I had.

As time progressed, I was enamored by MasterChef Australia and how they really took gastronomy to its zenith. I took baby steps into the food blogging universe by writing short Zomato reviews. Masterchef India was at this stage becoming bigger and bigger from where it started at Season 1 and both Masterchefs(Australia and India) filled me up with inspiration to the point where I could no longer contain it within me. I had to write out my feelings and my raw passion had finally refined into food blogging in the great cauldron of time. 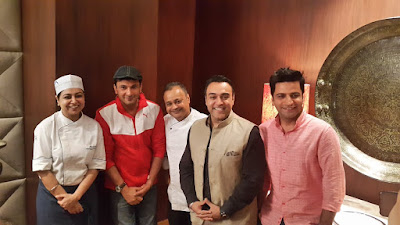 Chef Vikas Khanna, Zorwar Kalra and Chef Kunal Kapur along with the head chefs at Taj

The nostalgia and these memories played in my head as I was included in a list of seven bloggers invited by Zomato, Star Plus India and most importantly Masterchef India for the exclusive premiere of Masterchef India 5. It allowed me to share the same table with culinary giants like Chef Vikas Khanna, Chef Kunal Kapur and superstar restaurateur Zorawar Kalra. 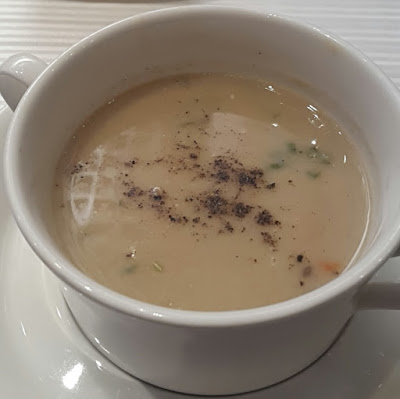 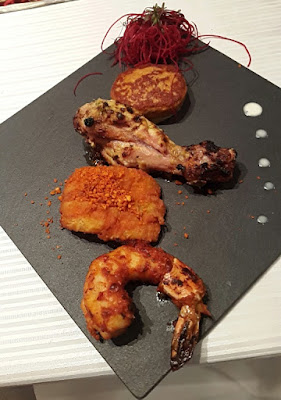 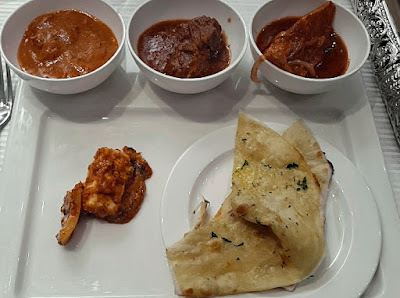 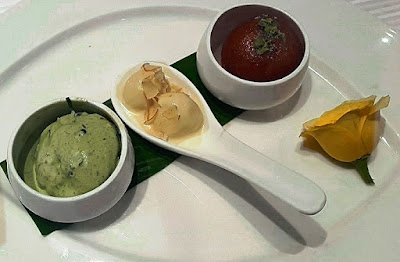 Within the premises of a special section inside Masala Bay at Taj Lands End, we were treated to the first episode of Masterchef season 5 a few hours before it was actually shown to the world. It is kind of thrilling to be a part of a premiere. Chef Amninder Sandhu of Masala Bay served us with a lavish North Indian fare comprising of Jhinga Kebabs, Galouti Kebabs, Butter Chicken , Dal Makhani, a Mutton Curry which was made using a family recipe and of course the desserts. She won the praise of not only the bloggers but also the Masterchef judges and one can be sure that the judges know their food well.

Masterchef season 5, Taj's amazing food and to be in the presence of stalwarts like Chef Vikas, Chef Kunal and Zorawar Kalra is a rare honor even for the best of food critics, bloggers and journalists. The euphoria was overwhelming. All this was brought together by the efforts of Zomato India and Star Plus India. Food Bloggers have come a long way into the industry which was once dominated by food journalists who viewed bloggers as easy to please outsiders.

This is partly due to Zomato which has transformed the food blogging scene completely. From a little known niche to a full blown industry. Zomato has been instrumental in transcending the food blogging scene beyond what one could imagine a few years ago. And Masterchef has been the ultimate source of inspiration for gastronomes in this side of the world. Ask any food blogger worth their salt about their favorite people and you will always hear answers like Vikas Khanna, Sanjeev Kapoor, Gary Mehigan - all Masterchef judges.

Masterchef Season 5 is a bit different from its previous installments. Its well paced, engaging, less on the decibel and more on the cooking. It brings Indian amateur cooks from all across the world this time for a Battle Royale like none other. Cooking is not just a hobby, it is a form of art that can be honed and channeled into something truly spectacular. Culinary masterpieces please more than one senses. The eyes, the nose and finally the tongue. Masterchef 2016 has just started. So who will win? Who will be India's next Masterchef? No one knows yet. Tune into Masterchef season 5 on Star Plus on weekend evenings. Lots of masala and lots of thrill, sometimes sweet and sometimes sour - This is an experience like none other.

Posted by Rishabh Mittal at 3:50 am