Tis' was a hot day as I stood on the deck looking at the horizon. We passed many a barren isles and shoals but no civilization. I climbed me ship's mast and looked further than the lookout could. There was something in the far side of the sea. Me face suddenly wore a smile when I saw a huge island with plenty of restaurants.

We had many a choice. Thus to pick a tavern, I placed a bottle on the deck surrounded by eight pieces of folded paper. Each piece had a restaurant name written on it. I spun the bottle as me crew keenly watched in anticipation. The bottle spun for a while, slowed out for a bit, wobbled and then finally stopped. It pointed at two o'clock. So I picked the paper at that position and unfolded it. The suspense was building. And the name revealed was Spices and Flavors.


Everyone needs a bit of spice and a whole lot of flava' in their life. Due to some strange alchemy somewhere, I have been getting a lot of invitations from vegetarian restaurants. Spices & Flavors(SnF) isn't a new name. Its quite popular and was actually recommended by my family who have been there a few times. I did not know much about it since I usually bat for the carnivore's team. But eh a trip down the vegetarian lane isn't bad. 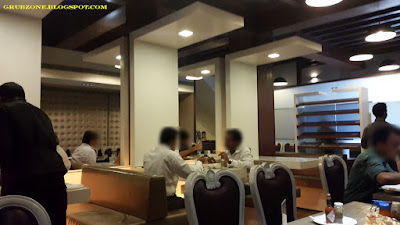 Being stuck in abnormal traffic and reaching the place almost after ninety minutes(the route is just 22 mins without traffic) of traveling had made me famished. SnF is not a loud restaurant. The ambiance is quite ordinary and usually intended for the office going and stock market folk who are the usual fellas around here.
Not wasting much time, I went with the Captain's food recommendations.

SnF has recently upgraded its menu. The only thing better than food is more food of course. So an enlargement of the menu is always a good thing. The restaurant has added items like gourmet pizzas, sizzlers and Cheese Fondue to their "mostly" Indian menu. The new found diversity is quite a welcome move. 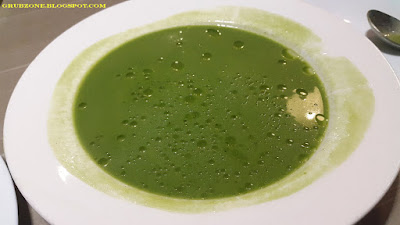 The Gnocchi Spinach soup felt like a thinner version of Palak ka Shorba. (Indian Spinach soup). A few chunks of Gnocchi sank to the bottom of the green sea. The Gnocchi were salty, absorbing both the flavor and aroma of the soup and melt in your mouth kind of soft. The portion size was quite generous. It was perhaps the largest volume of soup that I have ever found in any restaurant. 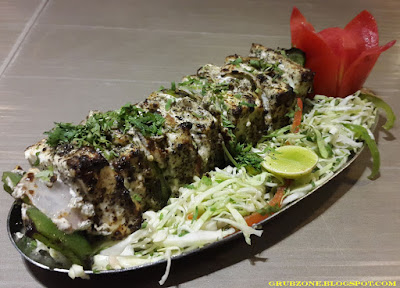 Paneer Kalimiri Kebab was a commendable vegetarian rework of the popular Chicken Kalimiri kebabs. Although these lacked the natural saltiness that their red cousins have, the spices were more largely felt on a paneer base. The earthly aroma of spices and the heavenly flavor was quite a combination. The paneer on its own was soft and velvety. 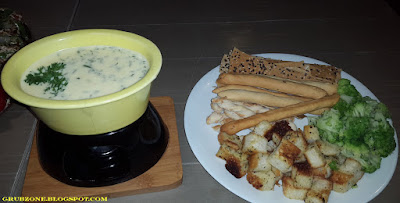 Cheese Fondue was a new addition to the menu. Though the color of the fondue was not quite the typical yellow that I expected, the flavor was accurate. It was a bit saltier than the average fondue. I spent a good amount of time dipping the different supplements with the cheese and devouring them. The Lavash crackers went best with the cheese followed by the bread cubes. The cheese straws and the broccoli were quite good too. The breadstick however felt out of place. To put it short, it was quite a good Fondue.

Crewmate : And into the sea of Cheese.

Captain : And then into me mouth. Ha. 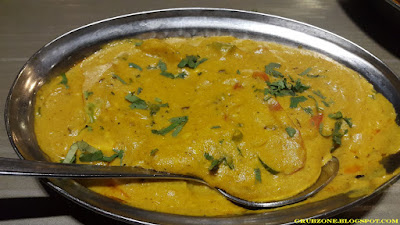 The Paneer Hazari masala was a mildly spicy and very savory dish. The gravy was thick and yet its flavor had rubbed on the paneer cubes quite well. More than salty, the spicy sensation dominated this one. T'was truly a dish of a thousand spices. Although, I am not quite sure if Hazari meant a thousand in this case ha. The aroma was very appetizing and the visuals equally enticing. 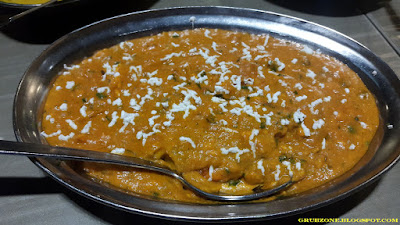 Vegetable Toofani Masala was a good dish but its name appeared strange to me initially. I expected Toofani to be hot. The taste was quite mellow and very similar to Vegetable Makhanwala. The dish had a smooth buttery gravy with a great aroma. The presentation was further enhanced by the addition of the paneer streamers at the top.

I think this was definitely the dish of the day. Its difficult to explain but the fact that I liked the most about this dish was the chef's work with the spices. The cooking emphasized the flavorful spices which sent me taste buds on a high. The spices really stood out. That was when I realized what Toofani stood for. It was the storm of different spices that would please the palate.

Captain : A spice storm be headed our way.

Crewmate : All sails down, Cappy?

Captain : Aye but luff the taste buds to the flavor matey. 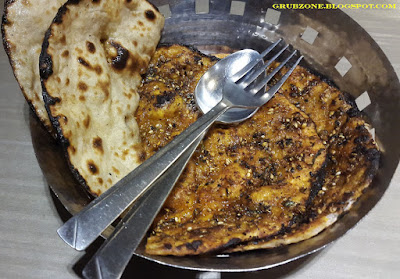 I tried the Masaledar Kulcha which was a dish on its own. It was rubbed with spices and would make a great spicy pancake. It drowned out the flavors of the two dishes above sadly. It however would make a great accompaniment to a mild tasting item like a Dal or something. It was oddly addicting as I found myself finishing it without dipping it in the dishes, somewhat like an aloo paratha.

The service is quite good as the servers are professional, experienced and well informed. It is on par with most casual dines across town.

The pricing tends to be a bit on the higher side but that's expected on this side of town. The food is worth every penny spent. The fact that the restaurant had many patrons even at 3 PM speaks volumes about its appeal.

It was a fun experience and I find myself enjoying my vegetarian hat. Their new Menu definitely is worth the effort to go there. Loved that Fondue.

"It was worth traveling through those barren isles to this place. But we must continue to seek more food, so lads time to get yer sleeves up and work the sails."


-I was invited by the restaurant to sample the fare.-

Posted by Rishabh Mittal at 6:46 pm