It was a windy and a sunny day. I was with me crew flying kites on the deck. I held my Firki in my hand as it unreeled letting my kite go higher and higher. A decent sailor is always good with kites as he is with any job that deals with lines. The crew gunner was studying the sky. This lad had sharp eyes being able to spot his target miles away. He suddenly shouted that there was a paper flying in the sky and stuck on my kite.

I was intrigued about this high flyin' paper. Maybe it was a treasure map that fell from the sky. I reeled in my line as I spun the Firki to bring my kite down. I took out the paper which was stuck on my kite. It said "Firki" and had co-ordinates scribbled on it. Mystified by the co-incidence, I directed me crew to turn the ship towards the direction written on the paper. Onward to...Firki.

Firki is a new restaurant. In fact, it has opened with the date of this post that is 2nd September, 2015. I was happy when I received a pre-opening invite. That allows me to get a glimpse of the show before it goes live. Its special. I was skeptical at the start because I am a carnivore and Firki is purely vegetarian. And it is not the kebab kind of vegetarian either so I wondered what fare awaited me.

There I met the Dedhia cousins KK and Kiran - The owners and the men behind Ithaka and Riso. These two eateries are already famous among the South Mumbai vegetarian crowd and Firki is the third that completes the trio.

Firki has a small dining area but a lovely ambiance. One of the walls depicts a small town in Gujarat or Rajasthan. In fact its so well crafted that my over imaginative mind could literally play a scene on the wall. 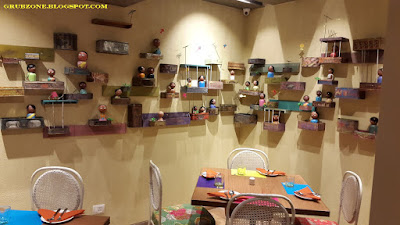 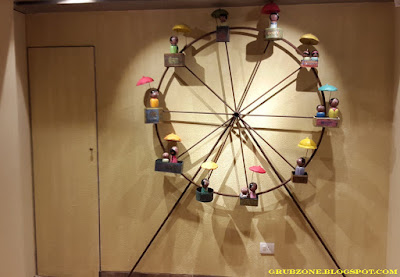 These artifacts also add to the whole Indian feel of the place. Its important to note that despite its limited size, the ambiance packs a punch. The golden light, the artifacts and its still in the process of completion. Gives a very country fair(mela) like vibe to the place.

The menu at Firki is an interesting one. While the food is completely Indian, it has an unbreakable bond with the west. The food thus is a fusion of Core Indian food and western ways of serving. The very first item that I savored was a perfect example of this. 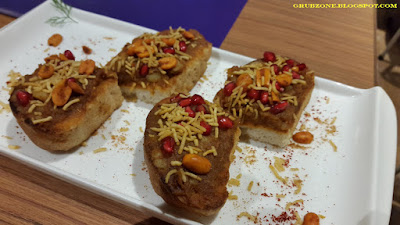 Dabeli Bruschetta was a clever invention. It tasted just like Dabeli but the garlic rubbed bread added a new depth to the whole thing. The potato mashing, the masala, the sev, peanuts and the pomegranate all blended in well with the flavor. The item appeared Western but tasted wholly Indian. I really liked the whole package. 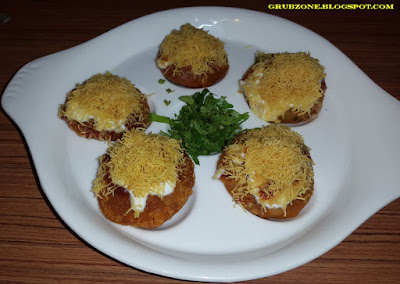 Mini Khasta Kachori was a visual and gustatory treat. The Fried pastries were filled with moong lentil mashing and a snacky spicy mixture. And then these were topped with Mint Chutney, Sev and yoghurt. The flavor resembled both Kachori and the street side Sev puri. It was almost two dishes packed into one and the presentation was certainly unique. At this point, I began to realize that vegetarian food can be fun at the right place. 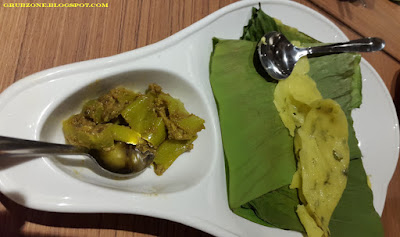 Paanki is a Gujarati dish that consists of a thin fermented rice cake made and packed in between a Banana leaf. It has to be peeled from the leaf to be eaten. While I have heard of this before, I have sadly never had this before. Such regrets, all that lost time. One bite of Paanki, took me to food heaven. The taste resembles Indian Dhoklas, it is quite salty and savory, the texture is smooth and slippery and it goes great with the pickle mixture provided with it. While I tried tasting portions of most other dishes - I ensured that I finished this completely. 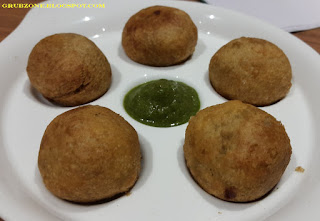 Watana Ki Kachori is the classical Kachori snack that I have grown up with. These hard fried dumplings contain a savory mixture of peas-lentils mashing inside. While the Watana Kachoris were delectable, I did not find anything special with them. This was partly owing to the fact that I am very used to these. However if you have never had these before, a snacky surprise awaits you. Move aside Cheetos and Chips, Kachori is the new snack on the block. 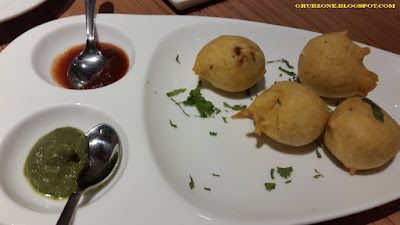 Mini Vadas are Firki's version of Mumbai's favorite snack. These soft potato dumplings taste as good as the best Vada Pavs anywhere in Mumbai. Dive your teeth into this savory potato mixture with coriander and spices. The flavors are well balanced and there are no hotspots of spices that cause glitches in the taste. And the texture is simply amazing. Its quite smooth with no blisters on the surface.

Handwa are patties made of lentils and rice flour. But they rarely appear like this in the mainstream. Firki's Handwas is like a Gujarati lad in the US. The appearance is quite western but the essence is Indian. The color of the patties felt a bit darker than I expected but the flavor was quite good and traditional. Think of Handwas as savory cakes which are purely vegetarian. The item is crunchier and less salty than Dhoklas.

Captain : These small patties pack a lot of power.

Crewmate : So you are actually enjoying a vegetarian meal Cappy? ;)

Captain : Every once in a while, when all the seas meet and the winds embrace, comes a place where I can enjoy vegetarian food.

Crewmate : Is that a yes? 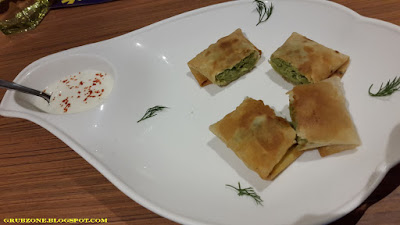 Paneer Lifafa (Cottage cheese Envelopes) was perhaps the only item that was a let down in the whole appetizer platter. It was almost like that one bad bowler tossing a bad over giving away many runs when the rest of the squad has been economical. These pockets were made out of Paratha dough and filled with a mashing of Paneer and spices. Though billed to be Tangy on the menu, it lacked that very element. It had a very potato sandwich like feel to it. At INR 300, it also felt a little harsh.

With the Appetizers wrapped up, the mains were on their way to come. To offer a little bit of palate cleansing to me, the restaurant have me this clear elixir. 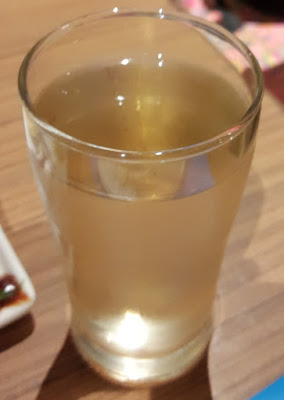 White Rose Petal Sherbet was a clear liquid with a golden appearance. And no it was not from the lights. It tasted very familiar but yet it was new to me. I have had Rose and Khus seed sherbets before but White Rose petal was a first experience to me. The sweetness was just right, it cleansed the palate and made feel nice inside. It also had a cooling sensation as it went down my throat. Dump soft drinks and go for this divine rose nectar.

The mains were served shortly after. 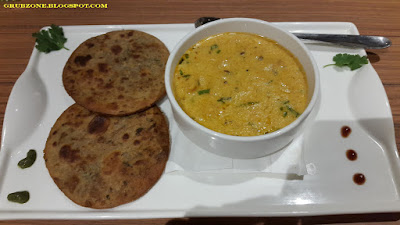 Gathiya Gatta nu Shaak was the best dish that I ate at Firki. The plating had minor western influences but the dish was Indian at heart and appearance. This was a Rajasthani curry with fried chickpea flour strips (Gatta) pre cooked in a spicy salty concoction. The flatbread was made of chickpea flour and had coriander-kachori like stuffing in it.

One bite into the dish and I felt that I was sitting somewhere in a sunny desert overseeing a typical Rajasthani village. Another bite took me to a royal palace where I was being served food. The last bite brought tears of happiness in my eyes. No dramatics over here. This dish was seriously that good. And this revelation comes from a meat eater. I wonder if my pictures do justice to this dish.

It may come off as a tad bit salty to some. But in the end it was a great experience. I would visit Firki again for just this. Only this.

Crewmate : Captain, you have tears in your eyes. Are those your eyes sweating again?

Captain : This is so good, its truly a treasure of the coast. Its filling me with such emotions. T_T

Crewmate : So you can cry after all. 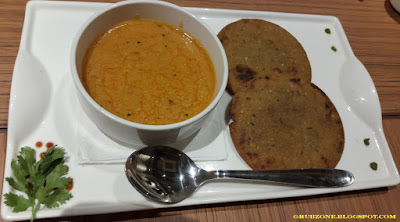 Thalipith Pitla is Maharashtrian dish. The Thalipith is the brown colored pancake which is made out of Pearl Millet(Bajra) flour, Chickpea Flour and rice flour. So its a Tri-flou-red pancake ha. This was quite savory and very addicting in flavor. The pitla curry however felt a bit of a mismatch. The coriander content was in excess and made this curry a bit bitter. 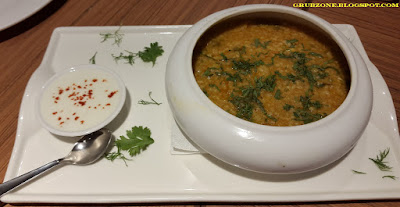 Fada Ni Khichdi was a rice dish made out of bulgur wheat, rice and moong lentil soup. Its an improved version of the staple Khichdi that is made in many households. There were some vegetables at the bottom of the Khichdi lake as well. The flavor was mildly salty, a bit savory with some umami as well. I found it to be very average and probably not my khichdi of choice.

The Palak Khichdi was the best of the Khichdi Trio. The aroma was divine. The color was appealing, one must be careful with green since it can often turn off people. Firki got it right. The flavor of spinach and butter made the Khichdi really amazing. This was my first time with a Spinach flavored Khichdi and was a perfect moment.

Captain : Green Khichdi? Then its really true that if you travel long enough, you can find everything the world has to offer.

Crewmate : It tastes great and I feel like beating up a big bully.

Captain : All sailors enjoy Spinach after all. Thank you for that, Popeye.

Baked Cheese Khichdi was an in house invention. The baked cheese at the top dominates the flavor. The rice within tastes more like a Pulao than a khichdi. I have eaten wet Khichdis, I have eaten dry ones and I can attest that the rice tasted like neither. There were also some cooked vegetables at the bottom. While this works well as a novelty, I wouldn't call it Firki's strongest Khichdi. 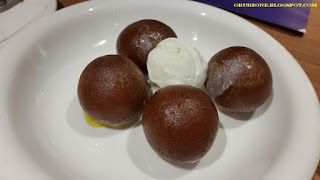 The meal closed with house made jumbo sized Gulab Jamuns and Ice cream. These milk solid dumplings soaked in rose and sugar water are one of India's favorite desserts. Firki's versions are remarkably larger than all Gulab Jamuns I have ever eaten. As such calling them Jumbo seemed apt. They surprisingly went well the Vanilla ice cream. Wonder why no one paired em before.

The pricing tends to be variable. The appetizers may feel a bit on the higher side while the mains feel just right. For a multiple course meal however the prices even out making Firki a reasonably priced establishment.

The service was reasonable though could use improvement. As Firki has just opened shop, I feel the minor service glitches may just be teething problems.

To round it up, Firki amazed me to no ends. I actually told the owners that if they serve everyone the food that they served me that day, they will certainly get accolades.

I thought my experience would be an average fare before entering the place. After all, I have a large bias against vegetarian grub. However, Firki completely proved otherwise. The food was great. Great enough for me put this place on a list of my regular joints. A vegetarian fare that overwhelmed a hardcore carnivore. That alone suggests how great the grub was. If you have had Indian food before, go to Firki and try their version. Feel the difference.

"Stop swooning over the food lads, its time to sail again. Mark this place on our map, for someday we shall be back."

-I was invited by the restaurant and Jaimishi Shivjiani to sample the fare.-

Posted by Rishabh Mittal at 6:01 pm