As we camped near the coasts that night, it started to rain heavily. There was a storm nearby. It be a good thing that we were near the coasts but the seas were incredibly turbulent. There was always a risk of the ship being pushed onto dangerous rocks near the coast. I sat in me cabin resting as the thunder and the rough seas deafened the sounds from outside. Suddenly my radio came alive breaking the passive moment. It was firsty.

"All hands on deck mate, we are under attack." 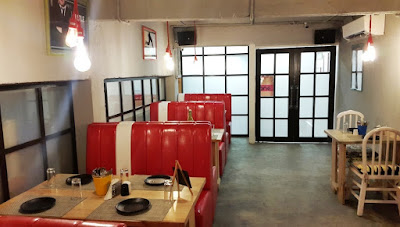 Belstone used to be a small restaurant near the Palladium mall. I had passed it countless times but never actually been in it. So when my inbox received a mail from their rep about their "opening", I was a little bit confused. It turned turned out that Belstone had actually opened a new place in Raghuvanshi mills. A much larger place and a completely new restaurant so to say. 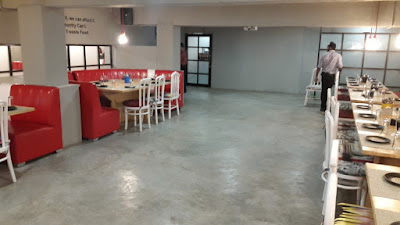 Belstone is large with a lot of empty space. The decor looks very spartan and the place may resemble a large lunch home. It kind of reminded me of thali restaurants in Surat, Gujarat. The decor, motivational slogans and lighting have completely been done by the owner Vinay Jain who happens to be an interior designer by education. 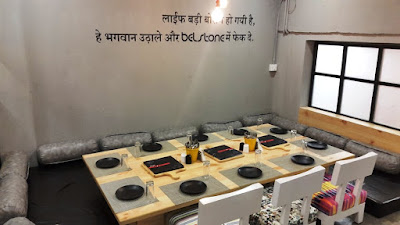 There were also these private rooms which can be booked by groups for a private meal. The low lying table reminded me of Japanese private lunch rooms though the North Indian roll-a-pillows added a very Indian feel to it.

The menu at Belstone is as large as their dining area. There are a lot of options covering Indian, Chinese, Italian and Mexican options. 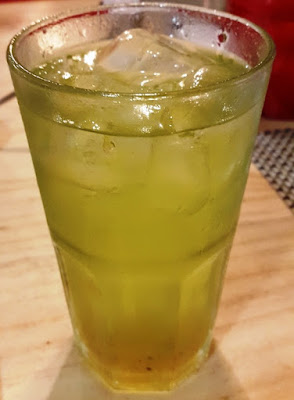 The Kiwi Lychee cooler was suggested by the serving staff. The drink was cool, sweet and slightly tangy. Worked well as a cooler though not as a mocktail. The restaurant is purely vegetarian and doesn't serve alcohol so coolers among other drinks are your best options to accompany food. 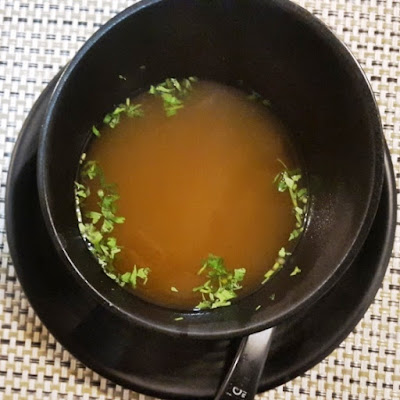 Lemon grass soup was slightly on the saltier side but that could just be me with my over sensitivity to salt. (I love Japanese food and low salt). The lemon grass was not immediately perceivable but as I dug deeper into the bowl, the flavor got better and I got a subtle and "just right" flavor of lemon grass. The soup worked well in creating a food appetite. 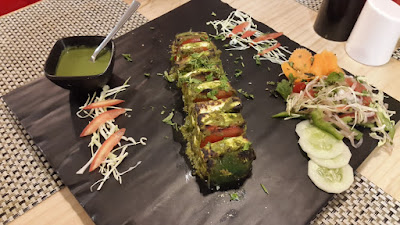 Paneer Hariyali was as good as they come. The flavor was perfect. The paneer was soft and fresh with great texture. The vegetables complemented the chunks perfectly. I am used to having this nibble with a cocktail in pubs, mostly with a Pinacolada or Mojito. Would be a cool idea if the restaurant adds virgin versions of popular cocktails to the menu. 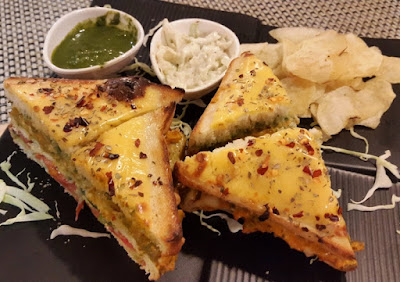 Belstone Sandwich was the restaurant's specialty that fared quite well in its older avatar. It seemed to be a crowd favorite too as this image(Different angle) became kind of viral on my instagram. It does have the street food vibe to it. The flavor was smooth, savory and simply delicious. The cheese and the greens were in a balanced proportion and it was topped with a light layer of butter, cheese and paprika. Whether you are a food writer or a regular patron, this sandwich is a must for both visuals and flavors.

Captain : Who would be attacking us on the sea in the middle of a storm? Those yellow bellied cowards.

Crewmate : The leader calls himself Little Cuvo. Imbecile ordered us to surrender the ship and disembark.

Captain : I am gonna carve up this Cuvo scallywag. 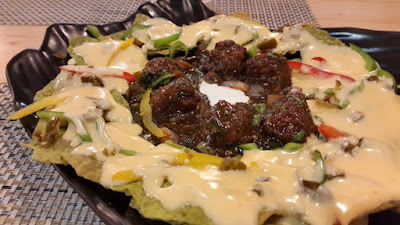 Fusion Nachos was the best dish of the night. These green colored nachos were the result of spinach being added to the the tortilla mixture. Vinay states that he encountered the dish while traveling abroad and thought of bringing it to India. And he did well. The Nachos were among the best I have had, these were loaded with generous amounts of cheese and had an island of vegetable Manchurians in the middle. Though not the best combination, the two savory delights did seem to work together in this Fusion dish. There was even a little lake of sour cream in the middle of the manchurian island.  Definitely a must have.

Enemy Fighter : Boss, what do we do? We haven't really fought a real battle in our lives.

Little Cuvo : Just see what they be doing. And do the same.

Enemy Fighter : That cannot work, they will always be one step ahead of us.

Little Cuvo : I have lived my entire life like that. We will kill them and take their ship and bux.

The Menu does not have many desserts at this point but I am told that the restaurant plans to open a separate patisserie somewhere on the property.

The service was fine though this being born out of a press invite, a server always kept a watchful eye on my table appearing instantly whenever the need arose.

The Pricing is similar to other premium vegetarian places in this part of town. Its kept pocket friendly for salary men and students alike.

Belstone shows potential. There were ups and downs but the overall experience was good. There is a lot that can be improved and I look forward to that patisserie being added.

"
Captain : These fools are attacking us for real? They are just trying to imitate our moves.

Firsty : Their powder is wet mate. Ours isn't, we can attack them from the cannon deck.

Captain : This ought to be fun. I want this Cuvo guy captured alive and brought before me.

Gunner : They way these scallywags are going, that shouldn't take us too long.

-I was invited to sample the menu by the Restaurant's PR. My review however remains objective.-

Posted by Rishabh Mittal at 1:33 am