What in the name of Poseidon? This wall, it vanished away as if it never existed. The mist began to lift and the ship began to drift ahead on its own. This sea is quite strange with some creepy magic inside it. As we sailed towards our next mark, the sea was relatively calm. Finally we will make it to a marked spot on the map without unnecessary stopovers. But the question that did not concern me earlier was making me anxious. Why did the mirror show me that memory and how did Nina manage to get inside it? 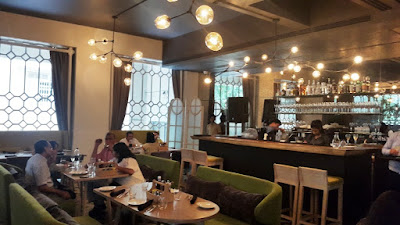 The Korner House (TKH) is a classy restaurant located in the interior lanes of Khar and Bandra facing Out of the Blue. Trust me, I do not toss around the word "classy" without good reason. The restaurant is helmed by renowned Chef Vicky Ratnani and it brings to the table the very definition of the term "fine dine". When you enter the restaurant, you pass a rain shaded al-fresco with a singer and live music. Good place to be during cooler weather and if you are in for the music. If however, you are the quiet type who just wants some good food and wine then walk right inside.

The dim lit golden ambiance is very typical of most fine dines across town. Lights resembling new buds on a plant hang from the ceiling and the place feels cozy.

TKH offers fine grog and a collection of fine foods made from locally sourced ingredients. I would greatly recommend something from their Garden, farm or sea sections if you want a good meal. I was here on a Sunday to experience their newly launched Sunday brunch which has its own special menu. 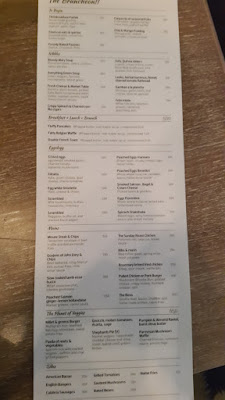 Quite a diverse menu for The Bruncheon.

This sojourn started off with some Chandon sparkling wine which was the welcoming drink. I like places which offer sparkling as a start off. Who wouldn't, right? 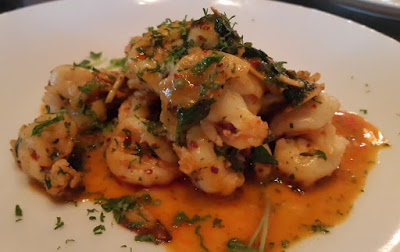 Gambas A la Plancha was grilled shrimp tossed in garlic confit, Thai chilies and parsley. This was a classical Spanish Tapas that goes well with any chilled liquor. The flavor was juicy, savory and went quite well with the sparkling. You can't have a better start to your Sunday than this.

Captain : The wind is too steady and the sea too calm.

Navigator : Not all calms mean a storm.

Captain : This one does. I can feel it in me bones. 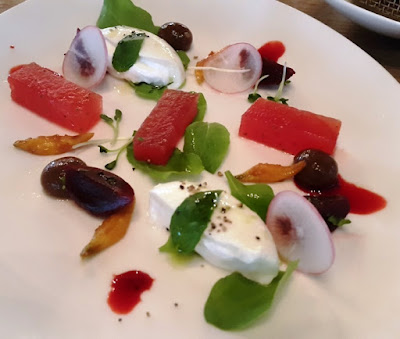 Fresh Cheese and Market table. It is a clean feel salad with plum tomatoes, pickled beets, Burrata, roasted carrots and a bit of molecular gastronomy with olive puree. But it does not come off as a satisfying eat. Sure it works well as a wine accompaniment but its little too less for its price. 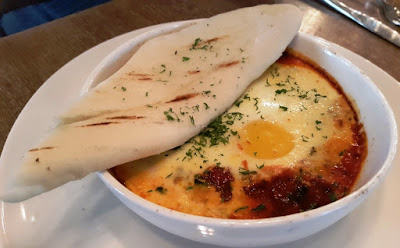 Spinach Shakshuka is a North African poached egg skillet which fits ideally into any brunch menu. While the egg, spices and the cheese at TKH were spot on - I did feel that this had a lot more tomato and less spinach. Not much of an issue in terms of flavor but if the menu states it to be a spinach variant than the tomato could be lesser. The dish was on the tangy side with subtle undertones of savory. Goes well with the pita. 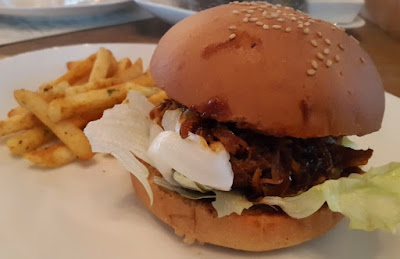 Pulled Pork Burger rarely fails to impress me. And TKH had taken their variant to the next level. The soft bun was stuffed with pulled pork drizzled with BBQ sauce and caramelized onions. It also had pickled chilies at the bottom. The burger was messy, juicy and simply too epic to write about. The flavors were sweet and savory. This was one thing that had me licking my fingers.

Captain : There better be some good restaurants there.

Navigator : Unlikely, this one be uninhabited. 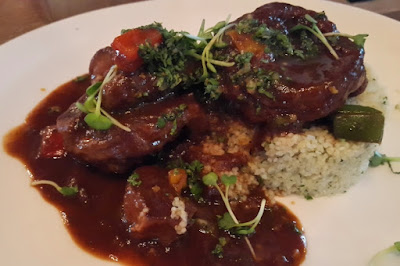 Slow Cooked Lamb Osso Bucco was a twist of the original recipe. This Milanese specialty used slow cooked lamb shanks instead of veal. And it was served with Millet couscous pilaf instead of Risotto. The only thing traditional about it was that it was garnished with Cilantro gremolata. The experiment was a success as this was definitely the best dish of the day. The flavor had several shades of savory and was simply a juicy party in the mouth. The couscous pilaf complemented the gravy well and completed the alchemy. Definitely a worthy main to order if one is fine with lamb and couscous. 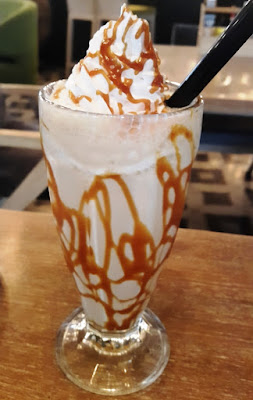 As my drink was over and the desserts were taking a bit of time, I decided to sample TKH's Sea salted caramel milkshake. One sip and the world would never be the same again. This shake was absolutely the best caramel shake that I have had in Mumbai. Thick, creamy and loaded with caramel - this was like a glimpse of heaven, a taste of nirvana or liquid rainbow so to say. This makes a good accompaniment to food if you are going dry and works well as a dessert. 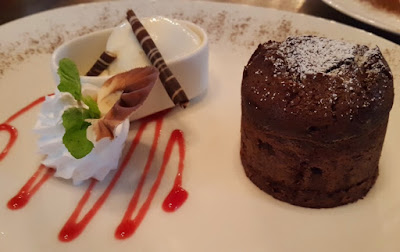 Choco Lava Cake had a soft crust and was full of rich chocolate within. Went well with the ice cream and whip cream. The ingredients were of premium quality hence the flavor easily surpassed run of the mill lava cakes. 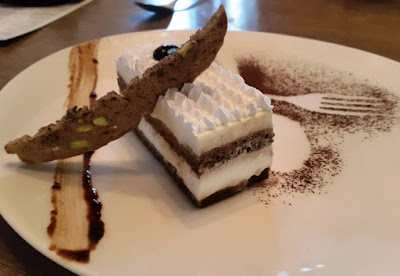 Tiramisu was the best of the sweet options that I tried. Was a bit creamy but otherwise tasted great and balanced. The desserts rotate everyday and if you happen to see this on the daily menu, go for it.

Captain : Landing party ready to row down to the beach.

First mate : I am getting an odd feeling mate.

Captain : Hmm, Its as if we are being surrounded.

The service was professional and the servers knew the brunch menu well. The place was crowded for a late Sunday afternoon so the service was a bit slow. Though the servers and their etiquette seemed to resonate well with the fine dine theme.

The pricing is definitely on the higher side but seeing that the restaurant was packed late into the afternoon definitely suggests that the people like the vibe and the food.

Wouldn't call TKH perfect but it does score highly on all factors from ambiance to service. Its the place to be at if one really wishes to savour a true fine dine experience. If you know your choices well then you will most likely be pleased.

"
First mate : That beach has a lot of debris on it. From wrecked ships, no doubt.

Captain : That be troublesome. It means that the island may be inhabited by the survivors of those wrecks.

First mate : Why is that a bad thing?

Captain : They may have not seen a ship in while and might be desperate to get off the island.

Quartermaster : I think we should stay out of sight and land at night.

Posted by Rishabh Mittal at 7:43 pm