This island was a dangerous place. Ruins everywhere and ragged shipwrecked sailors hiding in makeshift houses. We moved in a stealthily manner escaping the attention or sight of the island's desperate inhabitants. The map and the last clue showed an ancient symbol as the mark and we faced a crumbling structure covered with that symbol. Could the fabled compass be inside? We had traveled long and far, battled greedy adversaries and faced monsters. The crew wanted the quest to end and that we go back to our regular carefree ways. I wanted that too but not without the compass.

Copa is a pub that has been around for many years. Its located on a coastal strip which I fondly call as the Caribbean of Mumbai. This strip is famous for its eateries, beaches and a party vibe. Copa is among one of the favorite destinations on this strip for people seeking drinks and cheer. Its a minimal lighting restaurant that is best suited for escaping attention of the world and enjoying grog and grub. Copa has a rustic looking Al-Fresco, a minimal lighting indoor area and a rooftop area which seems to be under development. 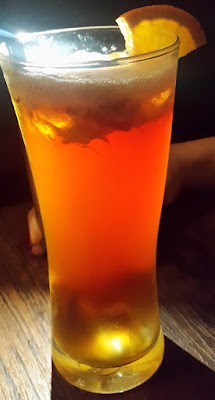 Tangy Mangy was a colorful, sweet and a spicy cocktail made from spiced Rum, Cola and Fresh orange juice. The potency was mild and its more of a "Lets get this party started" kind of a drink. 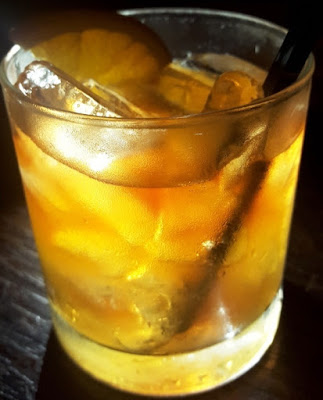 Classical Manhattan was more of an alcoholic based beverage as its flavor was dominated by whiskey and the taste was bitter. This had far higher potency and would go well with chicken or a long night of Bro talk. 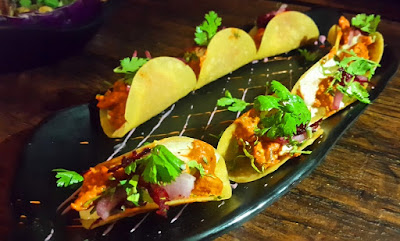 Butter Chicken Tacos is an idea that is famous abroad but for some reason is completely unheard of in India. Copa's butter Chicken Tacos were simply amazing. These were made of Tortilla shells stuffed with soft succulent chicken chunks oozing out flavor of the famed curry with every bite. It smelled good, it looked good and it tasted good.

Captain : For some odd reason, I feel like eating Butter Chicken.

First Mate : Seriously? All this in the midst of exploring a potentially dangerous structure?

Captain : I don't know. Its as if, another version of me in another dimension is having Butter Chicken right now as we speak. 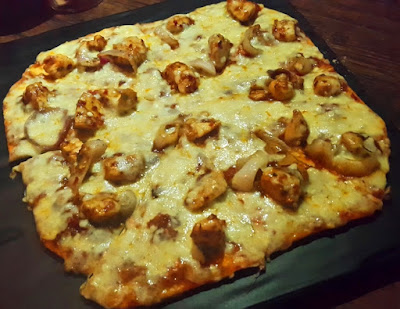 BBQ Chicken Pizza. Do note that square pizzas are not the same as flatbreads despite the resemblance. Though not very aesthetically pleasing, this pizza was one of the best pizzas that I have ever had. It was loaded with cheese, grilled onions and huge chunks of chicken glazed with BBQ sauce. The flavor was extremely pleasing to the palate. This Pizza makes an excellent choice for mass pizza gatherings. It was gourmet grade pizza for just INR 250.

Captain : Woah, I didn't realize that such a large abyss could be inside a small structure like this.

Crewmate : There is a rope bridge over the abyss leading somewhere into the darkness.

First Captain : We should probably rope ourselves to this end, that bridge looks dangerous...Oye where did he go? 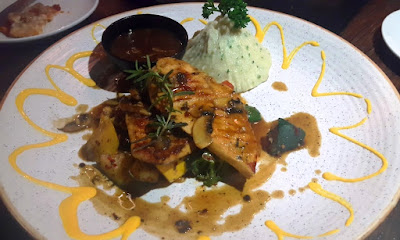 Chicken Steak with herbed potato mashing and mushroom sauce. Chicken steaks are rare to come across as the word steak is usually associated with red meat. Copa's Chicken steak was a perfect white meat emulation of the red meat favorite. The chicken was medium rare and tasted well. The soft potato mashing went well with small bites of chicken and mushroom sauce. The dish was scrumptious though I felt that oyster sauce would have worked better than Mushroom sauce. This dish would go great with an aged red wine.

The service was average as our server appeared a little lost. He stumbled a lot on descriptions and recommendations as well.

The pricing felt on the easier side for a place of this calibre. The food was certainly cheap though the drinks were priced as those are everywhere else.

Copa feels like a fun place, a place to disappear into when you need to get far away from the world's ever curious and intruding gazes. The only thing that Copa lacks is a proper dessert menu. Would love it if they add something beyond the old Brownie bit.

"
First Mate : Great, so we are over a wobbling rope bridge that seems to lead nowhere and we can fall down anytime. Thanks to you.

Captain : What are ya on about? Don't ya like adventure?

First Mate : But this was dangerously reckless mate. We don't even know whats beyond and we are on an island of desperate sailors willing to kill and snatch without hesitation.

Crewmate : Sirs, there is a sound up ahead.

Captain : Hark, what is it mate? That sounds like wind.


-I was invited to sample the event menu by the Restaurant. My review however remains objective.-

Posted by Rishabh Mittal at 3:46 pm