My navigator was studying Arianna Silvers' antique charts carefully. Nina was running around his legs like the adorable furball she was. He looked up and said that we were not just facing any wall of ice but something called as the mirror of memories. Arianna must've been a romantic lass coming up with names like that. However, something strange began to transpire. Suddenly the mist was gone and I was standing inside a restaurant. I could not spot the rest of my crew save one person and Nina.

Crewmate : Captain, we have been here before.

Captain : Holy Arianna Silvers. I know this place, I was here before. Its Vedge.


Vedge would always be special to me. Almost two years ago when I was a struggling blogger, a nice lady by the name of Chandni Tolani invited me to this place. And that is how Grubzone came into existence. Now, both Vedge and me have grown from what we were back then. I used to feel that Vedge would cave in to the contest of the eateries in Andheri Lokhandwala and I used to feel that I won't survive long as a blogger either. Jeez, I sure was a poor sod back then.

Flash forward to present, Vedge has not only survived but it has got multiple awards and has recently upgraded its menu to bring a truly vegetarian fine dine experience to the table. As for me, I would love to tell my tale over a cup of hot chocolate another day. 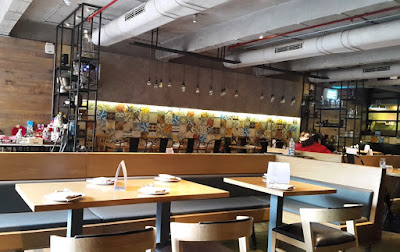 Vedge still looks the same as far as ambiance is concerned. Beautiful lamps hang from the ceiling. An eclectic mix of modern art design adorns the wall. And then there are the antiques. At this point, I would request you to have a glance at the first blog post I ever made. Ok actually the second.

There is a new chef in town so a new menu was apt. Vedge simplified its menu, removed some "not so favorites" and added a whole lot of new things encompassing Indian, Italian, Chinese and Mexican.

Here is what I tried from this diverse menu. 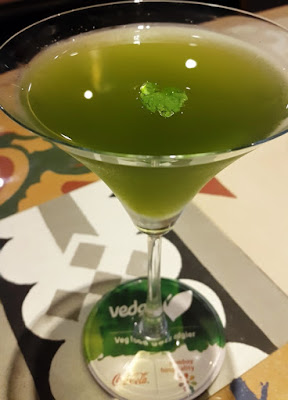 Paan Mocktail was refreshing, minty and sweet. It did not actually contain Tobacco or betel nut. A simple drink that was delectable. It reminded me of the Paan shots that I had in my last Vedge trip. I had longed for a full drink rather than shots.

Captain : Did this memory get upgraded or something? I don't remember this the last time.

Crewmate : It was there as a shot last time, Cappy.

Captain : If this is a memory being replayed then only me and you have to be in here. Why are you in here Nina? 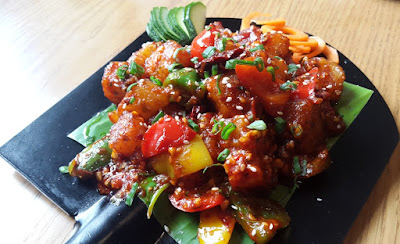 Chili Honey Potato emulated the Honey Chili chicken that I love so much. This wok tossed potato did not make me miss my favorite protein. An emulation well done. It was juicy with flavor oozing out of every bite. The flavor felt like a mix of spicy, sweet and had a bit of tang. 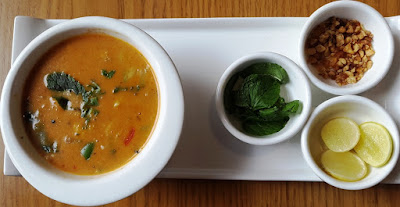 Laksa Soup was a simple affair. The flavor was earthy and spicy. It had a lovely aroma as well. They do offer the option of making it less spicy but that would kill the flavor. This soup is very appetizing so expect yourself to be quite ravenous after eating this. 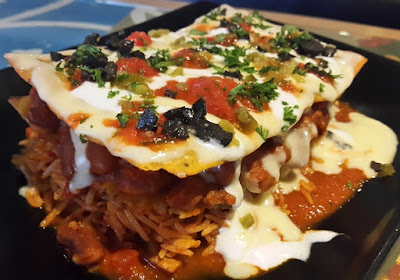 Tex Mex Lasagna was the piece de resistance of the Vedge experience. Initially I was disappointed to see that it was not a classical Lasagna. Pasta sheets were replaced with Tortillas, Italian veggies and spices with Mexican beans, rice and spices. But the flavor was quite something. The crunchy sheets with spicy savory mex beans tasted amazingly food. It got over and I didn't even realize it, it was that good. I wouldn't call it a Lasagna, preferring to call it a Nacho sandwich. But semantics aside, it tasted great.

Captain : This is too good. And this was definitely not there last time.

Crewmate : Maybe this memory is getting updated from the real Vedge somewhere in the world.

Captain : I like this memory, its tasty. Fine food in the middle of nowhere. Thats magic. 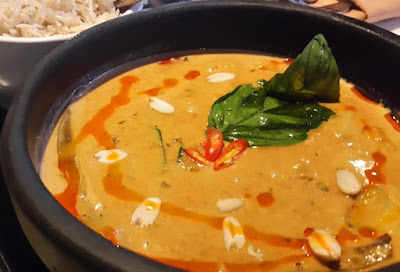 Massaman Curry was pungent, savory and tasted similar to Thai green curry minus the color and Kaffir lime. While it tasted well to me due to its similarity to Thai green curry, its important to note that this dish is difficult to replicate in a vegetarian environment. Without the seafood's inherent flavors, this curry tastes closer to Green curry or Khao Suey as coconut milk becomes dominant. 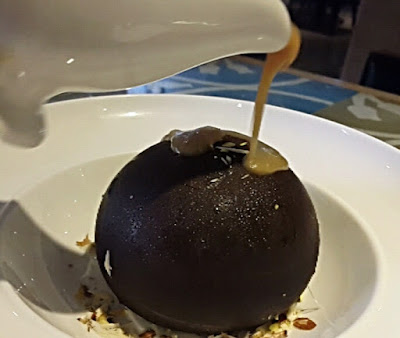 Magic Chocolate Pot was reminiscent of the popular chocolate bomb that I am seeing at many places. This contained praline, hazelnut mousse, chocolate, brownie and caramel sauce. It was a tasty dessert but a heavy one at that.

The service was fine and the servers even accommodated my constant shifting of the dishes to a table with daylight( for food photography). This bit is always annoying for the serving staff.

The pricing felt a bit on the higher side. But seemed to be on par with premium vegetarian eateries like cream centre or the like.

Vedge has definitely come a long way since it opened shop. They do seem to have a good menu on the table. All that remains is consistency. I enjoyed my meal experience despite being a carnivore and I think that itself speaks a lot about the place's caliber. Vedge is a must try if you are a vegetarian.

"
Captain eats the dessert and wakes up back on his ship. The crew is staring at him in shock.
Captain : My head hurts. Did I pass out?

First mate : No, you had completely disappeared. Along with the deck sweeper and your furball.

Captain : The dessert woke us up, apparently the mirror of memories doesn't support inception yet.

Crewmate : But why did only that memory play? Could have been anything else. Is there a reason?

Captain : Huh who cares. I am tired of waiting. Row the ship backwards if you have to and blow this damn wall up.

Navigator : That won't be necessary.
"

Posted by Rishabh Mittal at 1:31 am