While we were still celebrating our Tonician adventure, some of me crew wanted more grub. Those Greedy lads! A restaurant on top of a watering hole is a curious thing though and me lads wanted to try it out before we set for the sea. Thus, we went up the stairs and watched the worlds change from Tonic to Auriga. 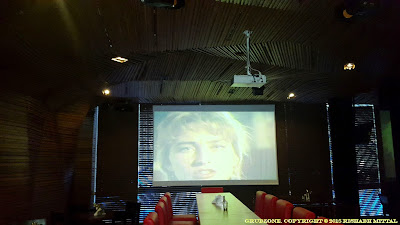 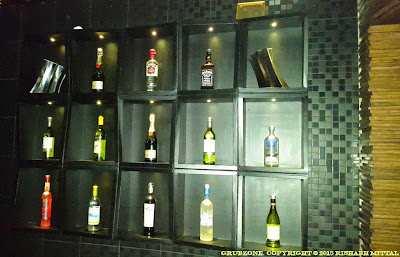 After my early evening grub and grog in Tonic, I moved up to Auriga. The old Auriga re-branded itself as Tonic which sits in the bottom and Auriga which floats on the top. The usage "floats on the top" works well if one thinks of Auriga as the star constellation of the same name. I walked up the stairs and it was like moving through a stargate. Leaving the neon lit and loud club atmosphere behind; and entering the relatively quieter and darker Auriga. 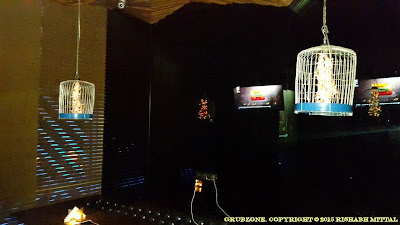 In terms of Ambiance, Auriga borrows some elements from Tonic like the caged lights but it still retains most of it's old architecture. The irregular wood work on the walls and ceiling create a sense of mystery and adventure. Combined with the dark atmosphere, it feels as if one is sitting secluded from civilization in a tree house deep in a jungle. If you come here to get away from the busy city life then I assure you that you really get away.  Though, the glass barriers do not completely mute the music from below, it brings it down considerably.

So in short, Tonic is for the active party types while Auriga is for the quiet diners. It won't be wrong to say that you sat under the Auriga constellation while dining. It's quite dark and the clever placement of the few lights create quite an atmosphere.

The seats are comfortable for the most part. There is even a large communal table in the middle, should one come here with a big bunch of people. To me, the large screen feels a little out of place but Mumbaites love their IPL and English premier league games.

Auriga offers a large variety of pastas, pizzas, Risottos and burgers. It also has a fair number of popular main dishes like Chicken Cordon Bleu and Ratatouille. It is a restaurant with an expanded Italian fare. These are the mains that I sampled out.

Burnt Garlic Cottage cheese burger is comfort food for the purely vegetarian types. These were served as sliders. These look rather appealing and taste equally good. The culture of sliders is slowly catching on in Mumbai but often a smaller burger means smaller patties and lesser effect on taste buds. Chef Ameya overcame those obstacles and gave us power packed small burgers. The flavor was great and it reminded me of the Good Ol' Veg Burger in the late 90s before McDonalds changed people's burger perceptions. The Burnt Garlic and cottage cheese blend well to provide a rather addicting taste.

Crewmate : They taste fancy too.

Crewmate : You are trying three at a time Cappy? 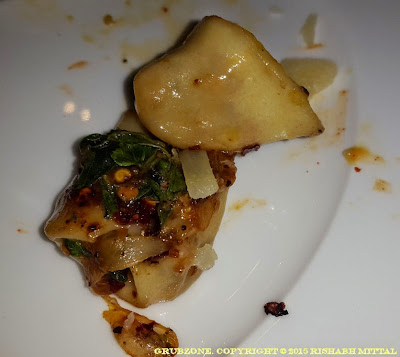 Grilled Veggie Tortellini uses the belly button shaped pasta called Tortellini. In Italian cuisines, it is usually stuffed with meat but in India it is of course customary to have a veggie variant. Auriga does well with it's veggie adaption. The spicy and oily flavor reminds me of Schezwan noodles. There is also a hint of Oregon and Thyme. Although I would have preferred a chicken stuffing, the vegetarian variant works quite well too. 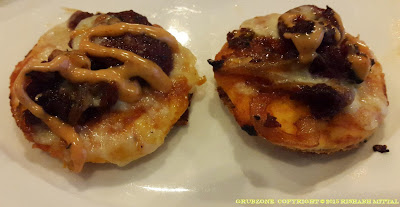 Mini Chorizo Pizzas were without a doubt the best item of the evening. Chorizo is my favorite ham and I love any pizza with a generous Chorizo topping. Now mini pizzas again run the risk of losing out on flavor but thankfully these small morsels just had a large chunk of ham and cheese on them. Very meaty and full of flavor, this is quite a treat for a carnivore. The only issue I found was that a large Chorizo ham pizza has room for more ingredients and cheese, thus making a diverse and complete pizza.

Captain : This is literally a coin sized pizza.

Crewmate : Can we toss these for heads and tails?

Captain : Sure lad. Heads I win, Tails you lose.

Basa Spiced Orange would literally melt in the mouth. It was softer than a bubble. The flavor of the meat was the typical gooey basa that I have found in many other places. Thankfully the spices and the mustard sauce provided a tangy and savory flavor. Overall though, I felt that this was a basic dish and missed the zing that I had expected it to have.

Chocolate Gooey Cake was a rich, sumptuous and a heavy dessert. Each bit had lots of sticky rich chocolate in the cake. A hint of basil could be felt too. While I enjoyed this dessert, I felt that Auriga currently has a very limited Dessert menu. It would be nice if they could increase the offerings by a bit. Since they specialize on Italian fare, some Gelato or Panna Cotta won't be bad on the menu.

Captain : This is tasty but I would have loved some Cheesecake or Panna Cotta instead.

Crewmate : I assume you didn't like it because it didn't make you high.

Captain : I don't remember getting high on dessert before.

The serving staff is the same for both Tonic and Auriga. Hence, once again I found the servers to be cordial and knowledgeable. Although, there was a fair bit of chaos and confusion around the communal table at the beginning and the folk at the distant end of the table only saw the dishes when they were almost served out.

The pricing at Auriga seems to be on par with most restropubs and Lounges around town. For an uptown eatery, I felt that the prices were well balanced and affordable. It would come around 1300 INR on an average for a person having one drink, appetizer, main and dessert. Given the quality of the food, I felt that it's quite satisfactory.

Finally the evening reached its end and it was time for me to come out of man made Auriga to go under the Universe made Auriga. Reflecting upon the overall event, I would say that Auriga was a well balanced and memorable experience. Although, I did feel that they could have had a larger Dessert menu.

"Its late lads, you had yer fun. There be more stars waiting for us out there. Out with the sails and back on the seas."

-This was a continuation of my Tonic Experience and the meal was on the house.-
Posted by Rishabh Mittal at 2:14 am