It was the call of the Brethren court. Food Captains from all over were planning a grand meet at a chosen island. How could I miss it for the world? With sails and me crew in full swing, we journeyed for a long time in the hot seas. As we neared our destination, I adjusted me hat and coat. Tis be an important meeting after all. As we approached land, me and my first mate got ready to land. I would be needing my best crewmate for this event after all.

I have to be honest and admit that I had not heard of this place until my friends mentioned it to me. They had planned a meet over here. I decided to make a voyage for food and for food company(I meant good company, honest.). The advantage of such a trip is that it spares one from the embarrassment that they get while taking pictures of food in a restaurant. Food Photography often wins hostile stares from everybody including the staff and the little baby in his mother's arms. Oh yes its great to be in good company. 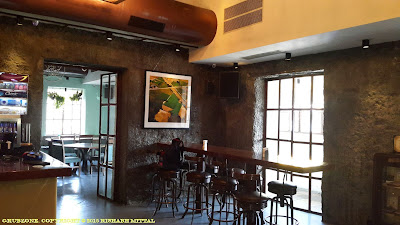 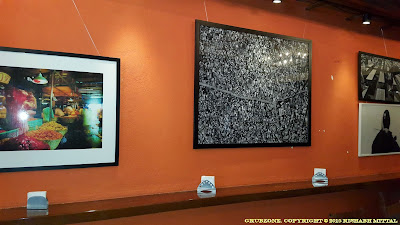 We met at Cheval as a "Hungry Dozen" of some sort with a determination to make our own tasting menu out of the grub offered. Cheval is a high horse that I wouldn't want to get off from. It feels very European in its decor. There are three sections to the restaurant. The classy pub, the old Villa and the smokers den.

Our bunch sat in the classy pub. It has a bright appearance, a mix of European and Industrial decor(Thanks to the Air conditioning Ducts overhead). There is also a flashy gallery like wall with a few art pieces. One must admit that it sets the mood quite high for a lunch on a hot day. The Old Villa had a very Mediterranean cafe like appearance to it. Given choice, I would have preferred to eat here but there was some sort of an event going on, which made this area off limits for us. The smoker's den is a small strip of space betwixt the restaurant's inner parameter and the old building's wall. Its good to have a drink and a smoke while looking at the hypnotic lights and traffic of downtown Mumbai. Good place to be at night, I reckon.

Being a little late, I missed the drink's party but was just in time for the entrée. Though, they do have a rather great Wine menu.

My first stop along the Rider's trail was the Warm fried Brie. While the item was acceptable and quite tasty, it wasn't quite Brie. It was too crumby and less Brie-y. The cheese within needed some work. The crust was too thick and the cheese lacking the appropriate viscosity.

The BBQ Rubbed Ribs had a very tropical setting to them. They screamed Mango republic due to the Mango paste draped over them. A truly interesting flavor. While a bit too well done for perfection, these still tasted great. The flavors were sweet, tangy and salty. I had to chew the meat off the bone with a little bit of an effort.

First mate : Quite true buddy, something different than the regular ribs.

Captain : This could have been a bit rarer though.

Lamb Chips with Romesco sauce made me feel that we had been served with the wrong item. More than chips, these looked like chops in the literal sense. But eh, I would be fine calling these croquettes due to the visual similarity. Nice, crunchy and with a fair amount of meat to it - this item was quite tasty. Its pairing went well with the Romesco dip although this dip lacked the essential spice and color to be genuinely Romesco.

Golden Squid Rings sounded like a very ordinary name for Calamari. One simply does not call Focaccia as bread or Gelato as Ice cream. Naming aside, this little appetizer was quite crunchy, tasty and less rubbery. Though not the best Calamari that I have had, it certainly was a decent little morsel. And the sweet red chilli provided an excellent combination. The savory smooth Calamari, with the crunchy golden crust dipped in sweet red chilli, made an excellent alchemy. Quite a ditsy rhyme.

First Mate : I could slip one of these on each of me fingers and then dip in the Chilli.

Captain : Oye, I usually start the dialog over here. 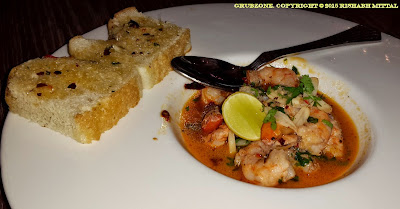 Ajilo Prawns are Cheval's take on the Spanish Gambas Al Ajilo. Usually made with Shrimps, this recipe does extend to prawns too. However, I felt that Cheval's variant missed its mark. Its almost as if one Prawn called Caesar said a loud "NO" to the dominating sauce and then lead a successful resistance against it. The dish had the typical garlicky flavor expected of it but it lacked the spice and sweetness. The prawns weren't sauteed to perfection as well and felt as a mismatch.

Done with the self customized tasting menu of appetizers, it was time to move on to the mains. 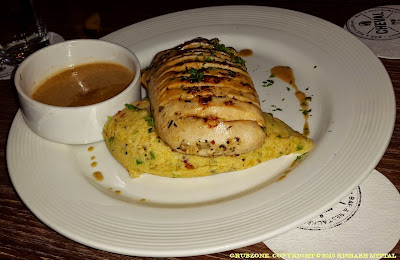 Stuffed Chicken was a rather grand looking dish served with Polenta and Garlic cream sauce. The plating was excellent. The chicken itself was addicting and stuffed with sun dried tomatoes plus pesto. But often a single offbeat musician can ruin an otherwise perfect symphony. The unruly musician in this case was the Polenta. Far from the soft item that it was billed to be, Signore. Polenta was quite hard, grainy and felt out of place. As long as I had the chicken and the stuffing alone, the dish was fine but pairing it with the Polenta was a mistake. 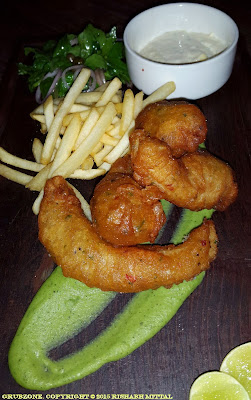 This was perhaps the most peculiar Fish N Chips that I have ever seen. Few irregular and unequal pieces of fish were coated with batter and deep fried. These were then served with Pea Puree, Caper Salad and Tartare sauce. Almost everything tastes good with Tartare for me. I took one of the fishy nuggets and enjoyed its pairing with the dip. Although the pea puree seemed to only have aesthetic purposes as it did not contribute to the taste at all. The fish was deliciously soft but the atypical shape made the coating uneven in certain areas.

Captain : Is this even Fish N Chips? 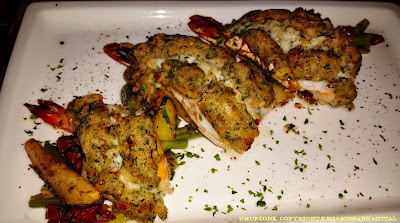 Jumbo Bay Prawns with Crab Mousse is a long name but nothing compared to the size of the prawns.The prawns were probably retired commandos given their size. These were plated beautifully with a fine sprinkle of spices for added texture. And as I chewed through these, I was acquainted with Crab Mousse for the first time. Not usually fond of Crab, its mousse was a totally different experience for me. And I positively have found a Crab based item that I can devour without hindrance. The dish was a flawless combination of flavors with some of the best prawns I have ever had. Would really recommend this to the reader. 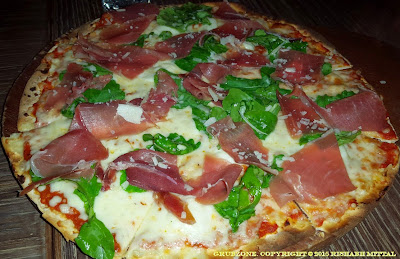 Parma Ham with Buffalo Mozzarella and Parmesan. I admit that I do not know half as much about Cheeses as I know about Pizzas. So it was difficult for me to distinguish between the two cheeses billed on the pizza. I vaguely consider Parmesan as a slight savory, meaty and slightly sour cheese which is best described as Umami in the food world. Buffalo Mozzarella felt much superior to the regular Mozzarella used in typical pizza joints. These flavors combined with the generous amounts of Parma ham made for a very sumptuous and flavorsome pizza. The crust was good but not the best in my experience. This however was a true Gourmet pizza.

The pizza had a slightly more sour taste than expected but nothing that intruded into my experience.

Captain : This pizza is parma-nently tasty.

First Mate : Do you mean the Parma ham or the Parmesan with that quip?

Captain : Lad, you are dampening my humour faster than rain on gunpowder.

With the mains done, we ordered a large platter of desserts. After all who doesn't love desserts? 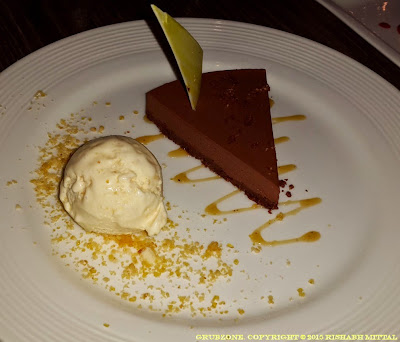 Chocolate Crumble Ganache tasted as good as it appeared. It had a perfect mixture of milk and dark chocolates and had a rich flavor. With an appearance that resembled a cheesecake, it tasted like a classical ganache and its team up with the hazelnut ice cream was great. This is a dessert that truly pleases the eyes and the tongue. 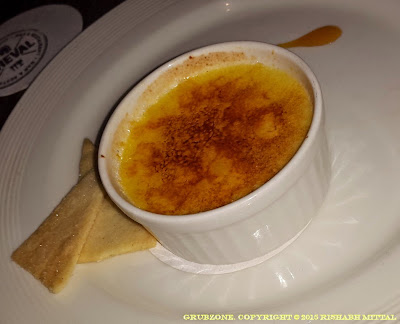 Crème brûlée with shortbread wafers. This was a very average dessert. The flavor was a little off and it lacked any depth and sweetness. Its safe to say that it wasn't a good choice. 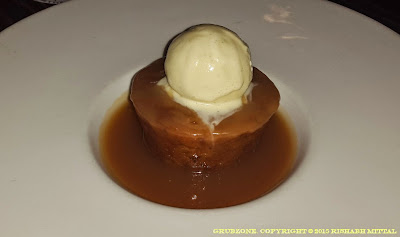 Sticky Toffee Pudding is sometimes referred as the flagship piece for the establishment by epicures. The sponge cake is perfect in consistency and soaked well with the Toffee sauce. The appearance is smooth and sticky at the same time. And thankfully it doesn't appear spongy and aerated. The appearance is best described as a castle of cake surrounded by a toffee moat.

Have a sip of the toffee moat, a bite of the toffee soaked castle and a spoon of the Vanilla ice cream which stands like a tower on top of this sweet citadel. 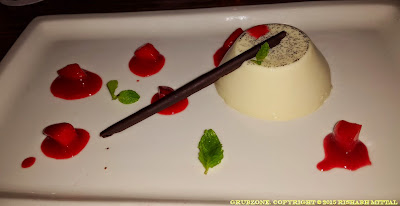 Vanilla Panna Cotta was an aesthetically pleasing, gustatory elevating and aromatically charming dessert. For me this was the dessert of the day. Surrounded by islands of Cherry compote and Basil for aesthetic enhancements, this was the perfect dessert. It was mostly sweet with a teeny weeny hint of tartness. This milky jelly was a paradigm of what a good dessert should be like. Went great with the spoon fulls of compote. It was a shame that this one got over so fast. But that tends to happen if you drop a dollop of dessert in between food lovers. It gets over faster than a piece of meat between hungry wolves.

Captain : Oye, Stop hogging the dessert and save some for your Captain.

First Mate : Easy there Captain, at least I have a smaller appetite than the cannoneer.

Captain : That be true but save me some dessert will ya?

The service was satisfactory and ordinary. It started off with glitches but resolved in time. Though definitely not something I find myself raving about. The crew needs a fair bit of more training.

The pricing in Cheval's could definitely be on the upper side. Although between our bunch, we managed to mitigate the costs to 1100-1150 a head. But an appetizer, a drink, a main and a dessert will definitely offset a single person in the North of 1500 INR.

To conclude, I will say that Cheval is a great choice for fine dining uptown. Given the opportunity, I will definitely want to come here again. Although, it does need a superstar attraction to put it on the map of food enthusiasts. As of now, my post will have to suffice. (Cheesy self promotion)

"We have a long way back lads, time to get busy on the sails. Set the direction to North and let's go. To the Horizon and beyond!"