Eat Around the Corner - Bandra, Mumbai

There were so many ships in these coastal seas. It was a difficult time steering the helm lest I collide into one of them ruffians in the sea. With a few of me mates, we carefully studied the map and zeroed in on our destination. With some clever navigation, we managed to make it to an inlet sea lane which was empty. And soon enough we saw our destination around the corner.

Bandra is a region with so many eateries hidden in lanes that its just not possible to find all of them.
Eat Around the Corner is one of them. It brought to you by the same people who are behind Pizza by the Bay.  Far from the busy Linking road, nestled in little known lanes and opposite Theresa's School is Eat Around the Corner(EATC). True to its name, its a L shaped restaurant located around a corner.

EATC has a large outdoor area and a cafe sized indoor area. The Al Fresco is known to host colorful events from time to time. The Spanish Night Market, for example recently happened here. This gives the Cafe a special feel. The indoor area has an atypical architecture with mirrored pillars blocking view and making the cafe appear smaller than it actually is. 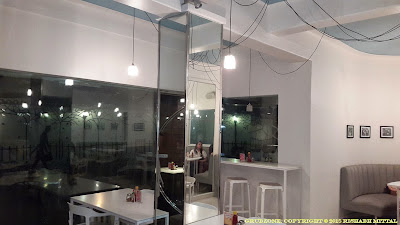 The ambiance feels spartan with additions of mirrors and lights. However the seating is quite cozy, which works very well for patrons. EATC boasts itself as a Cafe plus Bakery and lives to that role quite well.

With a vibrant display case of pastries, food and Italian delicacies - it does offer more than the standard Cafe-Bakery types like Moshe's or Theobroma. It also offers a lot of healthy food as part of its breakfast options.

Now to make a note - I was invited to EATC as part of an event with other food writers. We sampled some of their newest grub offerings. 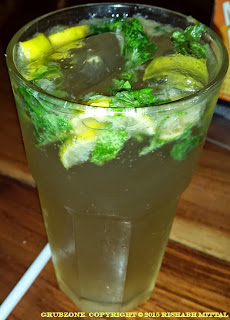 I chose a Virgin Mojito to start out with. Surprisingly for a cafe, EATC seems to have a limited beverage menu. The drink looked great visually but its flavor was overpowered by mint. The saccharine flavor was atypical of a Mojito. It lacked the tangy-zesty flavor which is expected in a virgin Mojito. 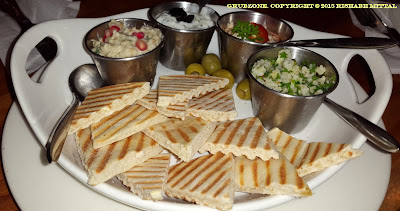 Tapas Platter was served with Hummus, Greek Yoghurt, Baba Ghanoush and Taboulleh. Tapas is something that differs from place to place. EATC offers simple and true Tapas. This little appetizer is meant to be eaten with the supplied dips and olives to get the right flavor. Different palates prefer different dips. I found the Taboulleh and Baba Ghanoush to be a mismatch while the Tapas tasted great with the Hummus and Greek Yoghurt. 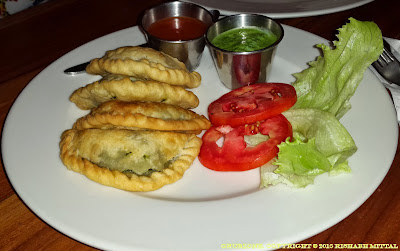 Veg Empanadas with Spinach and Feta cheese was served without the Feta so it was basically cooked Spinach wrapped with flour. The greenness of the Spinach was visible through the dumpling shell as well. Fair to say that it wasn't a hit with the crowd and it requires improvement.

Captain : I feel that Popeye would love these Empanadas. But I would have preferred the Feta.

Crewmate : I love Spinach. Its my favorite food after working out.

Captain : I love Feta, Its my favorite cheese eating out. 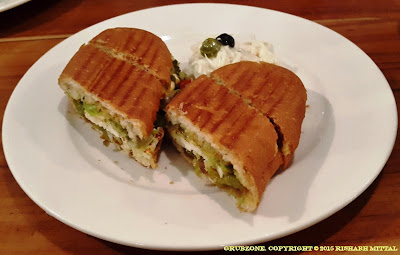 Grilled Cottage Cheese Cubano is a Cuban(Cubano is Spanish for Cuban) Sandwich using Baguette bread and stuffed with Bell peppers, Mayonnaise, Aubergine mashing, cottage cheese and caramelized onions. The taste was decent with the mashing and cottage cheese dominating the flavor. 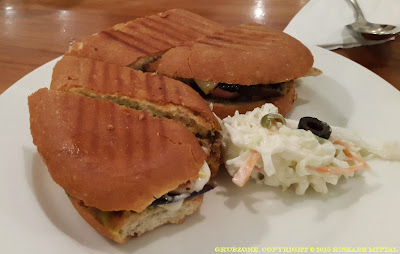 Grilled chicken Cubano is the carnivore variant of the above. Cuban Sandwich is usually supposed to be filled with Glazed Ham, so I was a little skeptical at the start. But this was an acceptable imitation of the original minus the ham and plus the chicken. Thin slices of chicken breast were paired with cheese and caramelized onions. And was served with a Mayonnaise dressing and Olives. The grilling could have been a lot better as it felt very little and uneven. 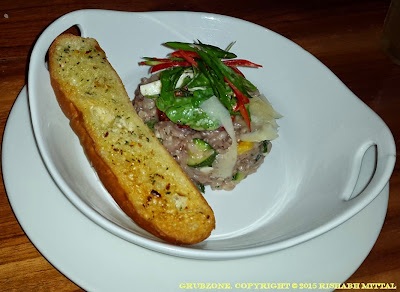 Brown Rice Risotto with roasted Squash and Arugula was an authentic Risotto which got the flavors right. The brown rice added a rich texture and the Arugula topping went well. The Squash was a little lesser than expected but I didn't find an issue with that. Was plated splendidly and tasted well. It is quite a delight for the pure vegetarian.

Crewmate : Tis be my first time wit it, Cappy.

Captain : You really need to see the world more.

Crewmate : But I have been with the crew ever since its first day. 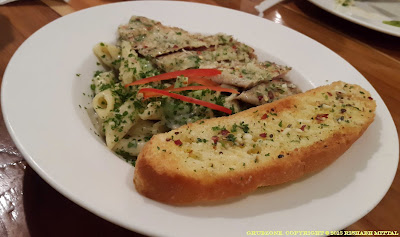 Penne Alfredo with Broccoli and herb crusted Chicken was by far the best serving of the evening. It was a generous portion of tender chicken breast marinated with herbs and served with Penne Pasta mixed with Alfredo Sauce. There was also a slice of toasted Focaccia. The flavors of Oregano and Basil were prominent on the pasta with a hint of Thyme. For a Cafe type installation, this was a dish of good quality.

Captain : I love the Chicken.

Crewmate : Y u no love Pasta?

Captain :  Oh, don't worry lad. I have already taken a nice serving of Pasta to go with the chicken.

Crewmate : Oh...hey where did all the grub go. 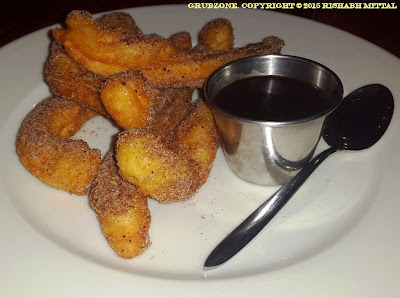 EATC's Churros is a different take on the classical Churros. These were extremely light with very little oiliness. Rather than being hard and crunchy, these were quite soft and chewy. It may not be the traditional Churro but the flavor was quite balanced and had permeated to the very core of each stick. The generous addition of Cinnamon sugar provided the right balance. This went well with the chocolate sauce provided. Apart from its great taste, it also had a gratifying aroma.

Since the meal was on the house, I cannot comment much on the prices. I just feel that the cafe can do much better by shaving its prices a bit.

The service is professional and polite. It's consistent with all MARS Hospitality installations. The servers know what they are talking about and can describe most of the dishes accurately.

Wrapping this up, I'll say that Eat Around the Corner is a great part of the Bandra food district. A place worthy of going again and again. And truly a gem for those living nearby. It offers good breakfasts and its events make it a fun place to be. However, it does need to iron out glitches so that it can achieve its full potential.

"All Right lads, we will surely eat around the corner again. For now we have a long night ahead. With the winds and under the stars, its back to high seas for us."


-I was invited to a Chef's Table event to sample some of their newest offerings. Thanks go to Chandni Tolani and Boomerang Media for inviting me.-
Posted by Rishabh Mittal at 4:40 am