It was a lazy afternoon and we were sailing in the middle of nowhere. I suddenly had the urge of having some Italian grub so I changed course for a place I knew. Sadly, the weak winds delayed us a lot. I was late but I saw me destination in the horizon. I asked the lads to quickly dock the ship. As soon as we had completed docking, I jumped off the deck on the ground below. I rushed to the restaurant only to be told that it was closed for the noon. But I was undeterred, as I saw something better - a Pizza place. That is how this Captain got acquainted with Pizza Express. 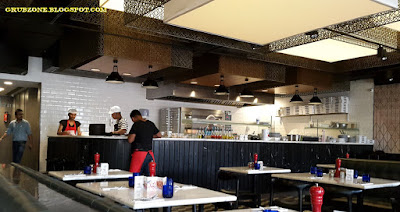 PizzaExpress was entirely a chance encounter. I had initially planned to chow down at another eatery nearby but due to Mumbai's lethargic traffic that day, I was delayed considerably. By 3 PM, that eatery was closed, only choosing to serve drinks till they re-opened at 7:30 PM. Determined to eat good food and salvage my trip, I decided to make PizzaExpress my destination of the day.

PizzaExpress is a strange name. Yes, there is no space between those two words. It has a simple sounding name, yet is one of the best places for Gourmet Pizza in Mumbai. Unlike many other Pizza chains, PizzaExpress started from the UK and not US. It was said to bring the Pizza of Naples to the UK. Across the years, it spread over the world and eventually reached the Diamond shaped country of India. Like the true Pizza enthusiast that I am, I had marked this place on my food map for quite a while. And as chance would have it, today was THE day.

PizzaExpress has a moderate sized dining area with decor largely typical of a casual diner. It seems to be catered towards families, the expats, the office goers and the like. The lights on the ceiling had square shaped designer shades around them. The shades in turn had an artistic metal frame around them. During daytime the ambiance has a very Cafe feel to it. At night time however, the colors come alive and it feels very much like the mature restaurant that it is. 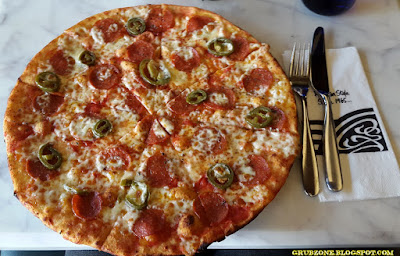 I went through the menu in detail before asking my server about a few pizzas. He didn't seem very well informed as he was fumbling with descriptions and being quite ambiguous. To make his life easier, I asked him about the original house specialty. And the answer was "American". This may sound strange coming from a British born Pizzeria. But hey, I would love a good pepperoni pizza.

The base was thin with a generous topping of cured pork pepperoni. Although its a tad bit irrelevant, one feels that it needs to be said - American pepperoni usually has pork with beef in the sausages. This pepperoni is closer to the original Italian variant. The sliced Japalenos provided a welcome balance. And, I loved the fact that it was a true meat pizza and not offset by an unwanted high dose of greens. The flavor was dominated by the salty pepperoni and a hint of tang from the oil and Jalapeno. Despite the thinness, each bite was loaded with flavor.

I enjoyed the scrumptious pie but I did find a few problems with it. The first was that the oil content was higher than what is expected off Gourmet joints. I did not find such anomalies in places like BBC, CPK or Indigo. The second problem was that the amount of cheese didn't feel generous. I could spot barren terrain at many spots. A well done pizza should never have cheese-less voids. The last issue were the edges. Half the pizza had blackened and hardened edges. This could act as a spoil sport on a perfectly good day.

Captain : That looks like a simple but tasty pizza.

Crewmate : Can I have my slice with some mustard, Cappy?

Captain : You already took a slice? That was fast. 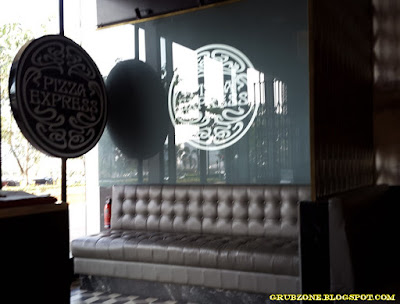 I wanted to try out their Baked Philly Cheesecake, having heard a lot of good things about it. Sadly, it wasn't available on that day. Bummer.

The service was average. I felt that it could have been much better. The servers need to be well informed about the menu. I also did not spot any Chef de rang at my time of visit.

The pricing was about the same as most other Gourmet pizza places. I felt that its all right, just that the pizza could have done without the anomalies.

To sum it up, I did enjoy my PizzaExpress experience. I will surely come again and try their other outlets(for sampling the experience there). The absence of cheesecake did put me off a bit but not enough to let the whole experience be ruined.

"The Sea Express awaits us lads. And we have to move her across the oceans. Back on the sails and onward we go."

-I dined anonymously and paid for my own grub-
Posted by Rishabh Mittal at 8:10 pm