Tis' was a hot day. The heat was creating many a mirages over the warm seas. The crew was exhausted and I was lying on the deck with me arms stretched out. A small eatery was spotted in the distance and we decided to try the place out. Upon reaching our destination, I was shocked to see a long line but I had no choice. If I wanted to have grub, I had to wait. The grub better be worth the wait in the heat was my loudest thought at tat moment.

Villa Vandre is the new cool kid in town. Seeing dozens of tweets and positive reviews relating to the place made me band along with my buddies to the place.

But before I start, let me bore you with a little anecdote-
Many years ago, I used to see commercials regarding the Singapore aquarium in which they would show the large colorful tunnel under the water. So when I went there, I grandly expected something as large as a road or rail tunnel under water. It turned out to be several scales smaller being a tube only a few feet higher than my head. The moral of this story was that things often appear larger than life in pictures. 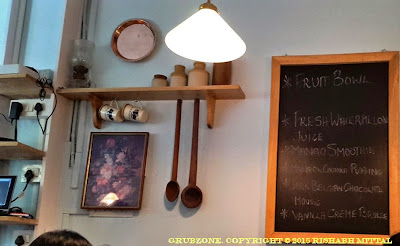 Back to present times, Villa Vandre turned out to be a lot smaller than I had expected. It's true that I was told that this was a small outlet but this was tinier than anything I had ever imagined. As a result of its large buzz, small size and over expecting clientele in several dozens - it was only natural that a lot of patrons would be waiting to get a turn. Since Villa Vandre does not do reservations, one has to wait. In my group's case, it was in the scorching heat of the Noon in India's Summer. I could literally find my appetite evaporating in the heat but all of this would be forgotten if the grub was good. 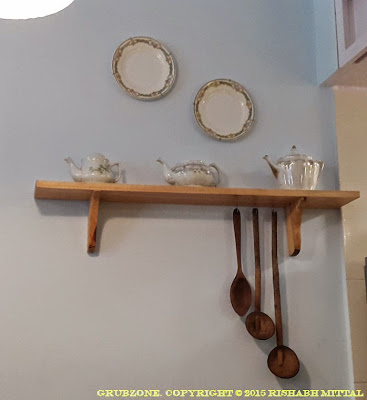 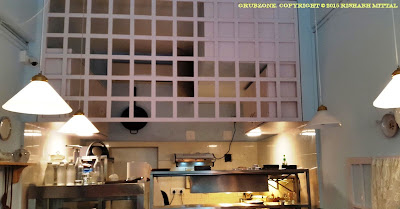 Smaller than a cafe and much smaller than a Villa, this establishment has an open kitchen and is equipped to seat only fourteen people. It feels a bit tight even for the fourteen people as you may find yourself pushed really close to the person on the other side of the table, especially if you choose to sit on the two seaters on the right side. I am no fan of small places with too many people. A bit of claustrophobia perhaps. The result of the arrangement is uncomfortable leg space with feet clashing often with the person on the other side of the table. Expect a few rubs with the serving staff as well.

The place has very well done interior decorations, faux windows and cutlery hanging on the walls. But the compact nature offsets it.

Captain : Your feet are touching mine lad, move away.

Crewmate : Captain, my feet are hugging the legs of my chair. Its your feet that are extended.

The service for the most part is stellar as one of the owners himself mans the eatery with another server. He comes off as a refined gentleman. 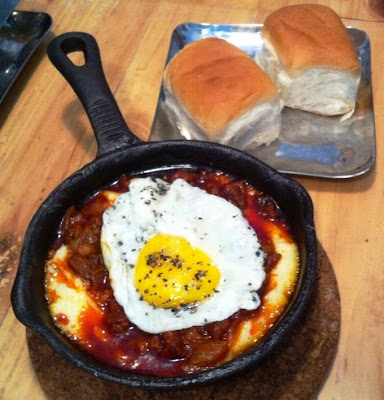 Homemade East Indian Sausage Fry was a great looking dish. The appearance of excessive oil was a little annoying but I usually disregard fat and oil in Sausage based dishes. The fat adds to the flavor. Till this point it was fine however upon tasting I found the item to be overly salty. I found myself unable to go beyond two bites. The salt was so strong that even a sip of water felt sweet after that. I have no idea what went wrong here but I am pretty sure that nothing is supposed to be this salty.

Pan Grilled Ham and Cheese sandwich looked accurate in the visuals. Using a milk bread variation, this sandwich was decent and had a very homemade flavor to it. Although there was an unwanted sourness near the edges, I think for the most part I was all right with this. Wont say it was good since the sourness was a bother but the sandwich was the best of the things that I tried here. 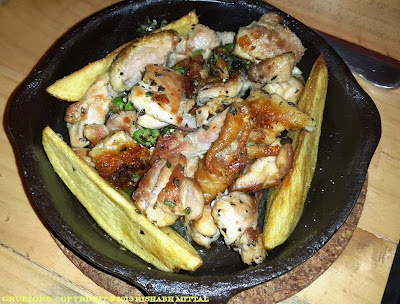 Greek Chicken. One could make a mistake once, have a bad day once but surely things could go right the third time. This dish looked splendid in presentation. However, it had a lot of problems with the ingredients billed and the final product. For starters, rosemary was either forgotten or added in a very minimal quantity. The potato wedges looked and tasted plain to me as opposed to the "Rosemary potatoes" on the menu.

Greek Chicken is supposed to be a fine balance of sour, salty and savory. The lemon juice should ideally be one to two table spoons in this quantity of chicken. However, Villa Vandre's variant had too much Lemon concentrate at the bottom making the flavor tart instead of mildly sour. That apart, the spices and the oregano were not properly marinated to the chicken. As a result the bulk of the spices had concentrated in the dish center leaving the outer pieces devoid of flavor. And the mixture of the spices was quite strange. It tasted less Greek and more Indian with the flavor resembling the chaat masala.

The last straw with this dish was the "feta salad". The salad served with Greek chicken usually has fresh lettuce, cherry tomatoes, Olives, Cucumbers and sometimes other vegetables. But all I got were two scruffy and tattered lettuce leaves without any Feta. It didn't even look edible. I immediately asked the server about the whereabouts of the promised Feta and he took the lettuce away and returned quickly with some small bits of Feta added from the top. This barely made a difference. The feta was supposed to be mixed in a proper salad mixture and in generous amounts. Adding small bits of feta onto a pair of old lettuce leaves does not make a feta salad. As a result, I sadly set the salad aside ignoring it for the rest of the meal.

Captain : Potato without Rosemary, Chicken without Greek, And Feta Salad without salad and feta. What in the world is this?

Crewmate : A weird wonder of the sea?

The food experience did not make up for the almost hour long wait in the hot and humid Mumbai noon. The pricing feels a little bit on the higher side for the portion sizes served. Combined with the wait and the clustered ambiance, it actually feels harsh.

To conclude, I will only say that the place has a lot of work cut out for it to match the buzz that it has generated. While I appreciate the service and am willing to overlook the horrible wait, I really expect the food and experience to be worth the money.

"Well lads, atleast we can man the ship and find a more grubworthy place. Full speed ahead."


-I ate along with a bunch of friends and paid for my own meal. -
Posted by Rishabh Mittal at 2:29 am