All Stir Fry at The Waterstones Hotel - Marol, Mumbai

Sea beneath and sea beyond. Nothing but blue around.
I looked at me map, a bit confused. The co-ordinates marked were nearby but there be no land in sight. Suddenly, a strange mist began to fill the air. Where the mist came from, nobody knew. The lads were quite anxious. Its not everyday that one sees something like this.

Then as mysteriously as it had appeared, the mist disappeared. The seascape changed completely as if we were facing an illusion. Now, there were many tropical islands on the sunny tranquil sea. And as marked on the map, the biggest one was our destination. "This be quite the magic of the sea lads," I said, "I wonder what lies for us at our destination." 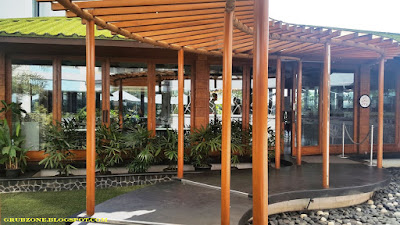 All Stir Fry is an Asian restaurant brought to you by the group behind Pizza by the Bay, Eat Around the corner and Havana's(MARS Hospitality). The ASF outlet in Colaba has been a popular grubshack for a while now. But the new one at Andheri, inside MARS Hospitality's iconic Waterstones hotel is entirely on a different level.

Waterstones is a thematic five star Hotel with each floor adorning different themes like Mountains, Snow, etc. The place has an amazing infrastructure and feels like a tropical resort within Mumbai. The clustered Sahar neighborhood, the slums and the chaos of the town simply vanish away as one enters the Waterstones' property. It is a mesmerizing paradigm of tropical beauty that feels like a dreamy retreat from the city's rat race.

Walking to the restaurant itself was a soul pleasing experience for me and built up great expectations. I was part of a Blogger's meet organized by the parent group's PR. I have been having a lot of these recently but some experiences are more memorable than some others. 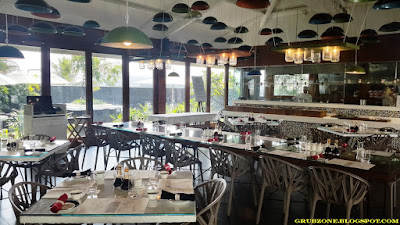 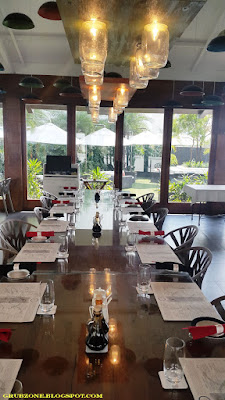 The restaurant has a moderate sized dining area and its ceiling work is quite spectacular. Yes, I am using spectacular instead of just beautiful. The ramen bowl shaped lights hanging from the ceiling seem to blend in well with the themes of the orient. It is a shame that it was daytime. My above human sense of imagination tells me that this place must simply look divine at night with all those lights. Well that is a picture and experience for another day.

Being surrounded by a garden gives the place a very tropical feel. Its as if one is sitting in the jungles of Southern China or Malaysia and dining with the elements. 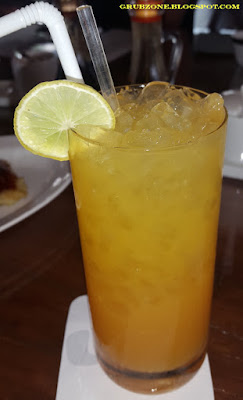 Hurricane was a very peaceful looking cocktail for its name. It was made of Sambuca and Vodka as base liqueurs. The anise like flavor of Sambuca dominated the flavors. Grape fruit, orange and lime added a bit of acidic tang to the drink. T'was quite a potent and a tangy drink. Though the mixer could have cut down on some of the rocks. 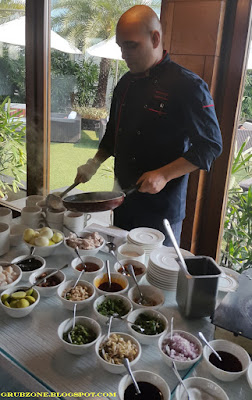 Before me meal, I scouted the food on offering. It was great to see Executive Chef Zubin D'Souza being a part of this luncheon whipping up various goodies for the patrons.

Crewmate : Should we ask him to join our crew, Cappy?

Captain : That would be nice but I doubt we could afford his services.

Crewmate : We should get more booty.

Captain : Aye lad, now if only I could find me the lost Spanish galleon rumoured to have millions of Golden doubloons.

Crewmate : Then we could get rid of our Caravel and buy a nuclear powered super carrier.

Captain : Oye Oye, our ship is our crew mate too. I will never get rid of her. 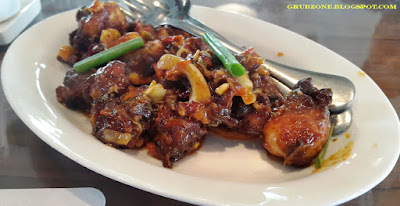 Chin Win Chicken was a simple dish with a savory and garlicky flavor. It was tossed with veggies, spicy garlic and soya. It resembled the old classical garlic chicken for me. A safe bet for any oriental themed restaurant. 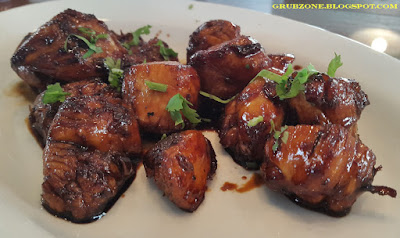 Chicken Teriyaki used chicken chunks much similar to the dish above. It was wrapped with Teriyaki sauce and greens. The flavor felt very pedestrian and I considered this a passable affair. That was a sad turn of events since I am extremely fond of Teriyaki chicken and any deviation from my self made norm can force a harsh opinion out of me. 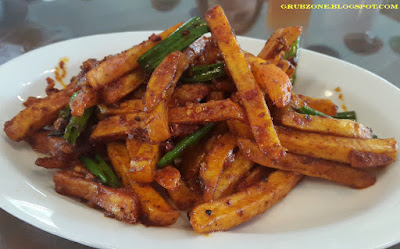 Chili Potato is often an instant favorite at most places. Whether enjoyed as an entrée or a bar nibble, this works at most places. At ASF, it was excellent with long fingers of potato wrapped perfectly with a sweet chili sauce. 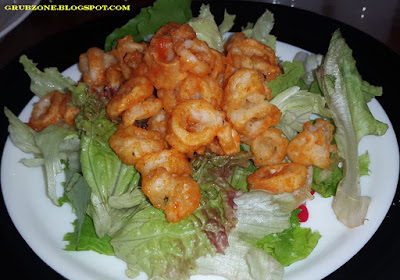 Chili Squid was a fried preparation which was crispy, spicy, savory and slightly pungent. Shichimi Togarashi or Seven Spice Powder (Shichi meaning seven) was used in this dish too. Its an orange colored mix popular in Japan. It adds a pleasantly aromatic and spicy flavor. This dish was an overall winner and popular across the table. Despite being oriental, it had a very striking resemblance to calamari.

Captain : It be fun to wear these as rings and eat em out of yer fingers.

Crewmate : But ain't it rude to play with yer food, Captain.

Captain : Who do ya think we be lad? The Royal navy? 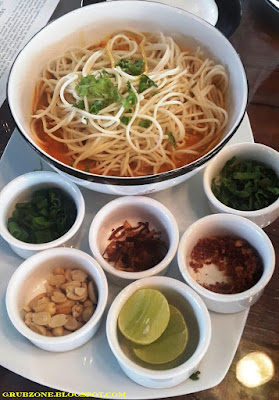 Chicken Khao Suey turned me smiles into a frown, momentarily. It lacked the pungency of genuine coconut curry and felt very insipid. The chicken pieces in it had no flavor too. Despite being a very visibly arresting dish, this one lacked the elements to impress the palate. 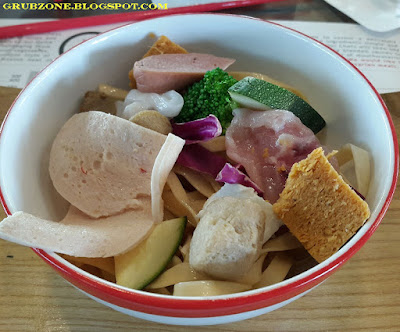 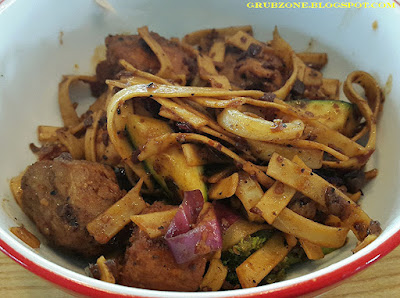 (Top Before Cook, Bottom : After Cook)
Customized Wok. All Stir Fry has been known to be among the pioneers who popularized Wok tossed noodles in Mumbai. Long before the Wokunami hit Mumbai, Wok noodles in its most sacred form existed at AST. This dish follows a buffet standard, for INR 730 one can have as much of it as one desires. Seems to fare well for folks like me who would like drinks and some noodle after a tiring day or a long flight. One can assemble the base ingredients themselves.

First collect the noodles of your choice - There were six kinds in offering during my visit. Then add the veggies from a large selection of both local and exotic (like Red Cabbage) ingredients. And its recommended to go after the meats and seafood last. Then one gives their bowl to the chefs who will flip it upside down into a wok and cook it. One can choose their sauces and condiments. It is recommended to go after one sauce rather than too many unless you want to "Subway" up your noodles.

The final product has limitless possibilities. My choice of Kung Pao sauce with hot spices gave me a good mix in me bowl. It was spicy, savory and very meaty. One done, thousands of combinations left. This was definitely the zenith of my All Stir Fry experience. Shame I could not go for seconds or thirds or fourths or fifths.

Lets move on to the desserts. 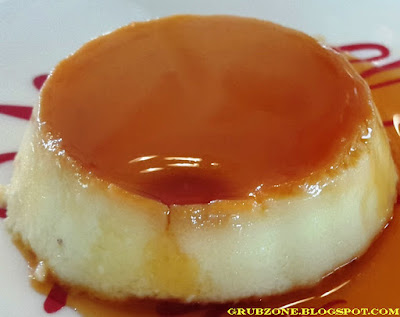 The Caramel custard lacked the juiciness and the custard-ness(if there is such a word). It felt like a very tight piece of arrogant flan. 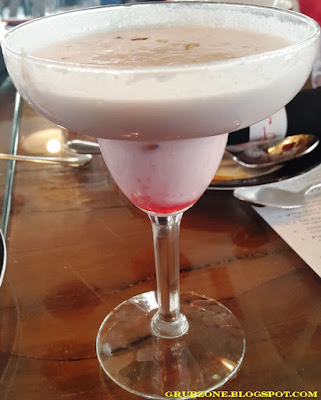 Tum Tim Grob was a dessert made out of coconut milk and water chestnuts. Its a popular summer dessert for Thai people. ASF's version could have been more colorful and have had more toppings. It felt like a sweetened version of Khao suey in a dessert completely dominated by the coconut. Somehow, this one did not please me palate. 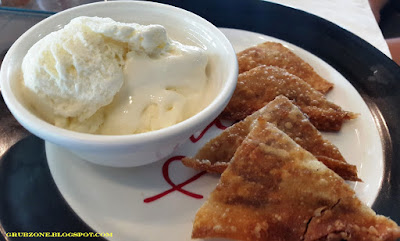 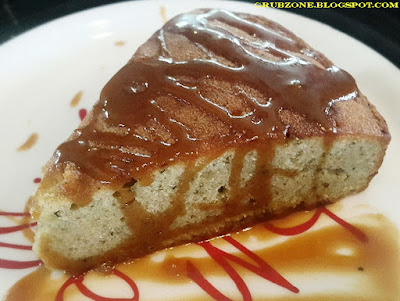 Green Tea Cake surprisingly looked different from what I expected. Blame social media for filling us with images of Green Matcha cakes. But appearance is an important factor since it manipulates gustatory perceptions. Despite being branded as a green tea cake with green tea sauce drizzle, I felt nothing of Green tea within.

Captain : I love this Peppermint cake

Captain : Does it look green to you?

Crewmate : But green tea is not green. Thats matcha...Hey where is the cake? Did you engage me in a distracting conversation so that you can pilfer the cake?

The service was variable. The guy serving us at the start was excellent. Polished, articulate and well informed about the dishes. The other server towards the end of our meal however delayed the desserts, the Khao suey and had confusion with the dish nomenclature.


The pricing is quite easy on the pocket for an establishment inside a five star. Getting a plate of Chili Squid with all of its exotic ingredients at 450 INR sounds unrealistically cheap. It would have cost at least a thousand in most other five star Hotels. To be honest, the pricing resembles those inside bars, pubs or casual diners. Coupled with the amazing ambiance and quality that ASF brings, this is definitely a steal.

There were many ups and many downs at ASF. Its a new place and will stabilize with time. But if I look back at it, I enjoyed my experience. It will remain to be one of my most memorable restaurant visits. Thus reader if you are around the Mumbai Airport, do drop in at All Stir Fly. And if you are a jet setter, then a stay plus grub inside the Waterstones Hotel would be a good choice.

"Filled and inspired lads, that be how I feel. Now show me yer strength, pull some lines, set out the sails, raise our flag and conquer the seas. "


-I was invited to sample the grub by the Restaurant's PR. But me post is unbiased and neutral.-

Posted by Rishabh Mittal at 8:22 pm