This was it, the last mark on this map. We had visited every other mark but this and it was time to find out what this be. Rumour had it, that it be a dim lit Tavern. Aye, those be me favorite. The night sky looked beautiful as me ship sailed near the coast. The first winds of the winter brought in much relief from the hot voyages of the past. And it boosted me spirit of adventure.

This region had no beaches nor a port. It was difficult to even row in with a dinghy since steep cliffs dotted the coast. But a good sailor does not fear such trivialities. We neared a cliff and I yelled to the lads. "Who is up for a climb to get some Rum?" Good Poseidon, it was going to be a large landing(or climbing) party. 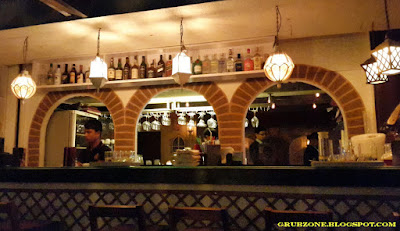 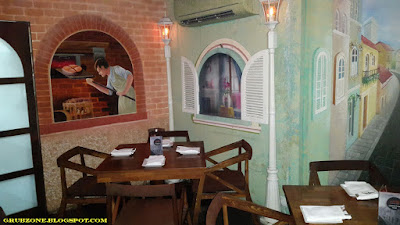 Asado meaning "Roast" in Spanish is a place for both roasts and toasts. Evolving from its earlier avatar of "Asado, The Latin Grill", its now known as "Asado, The Cocktail street." Nestled in the popular food district of Bandra west, the place feels like an ideal choice for a sinful evening binge. Dim lit with loud DJ music, Asado comes off as a typical lounge-bar initially. However unlike most lounge bars, the establishment also offers decent grub in the form of popular Mexican delights. I suppose that stems from the legacy of its earlier incarnation.

Being a part of the Balu Hospitality group, Asado has a great cocktail culture. There is a lot of creativity and inventiveness. And one gets to see a lot of designer cocktails that are otherwise a rare sight in India. 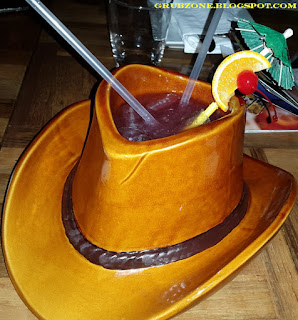 Tiki Mexicana was served in a container shaped like a Texan cowboy hat. The visual elements definitely were in there. The taste was a mix of sweet and citrus sour. This cocktail was made of Rum, orange juice and probably some vodka and gin. The cocktail had a light potency but its sweet tangy flavor was quite addicting and it ensured that every last drop had been drained. This little western adventure would put all hat sippers to shame.

Captain : So this is how a cowboy's brain tastes like.

Crewmate : What are we? Zombie Pirates? No grotesque comparisons Cappy.

Captain : Do you feel like not having yer drink lad? :D 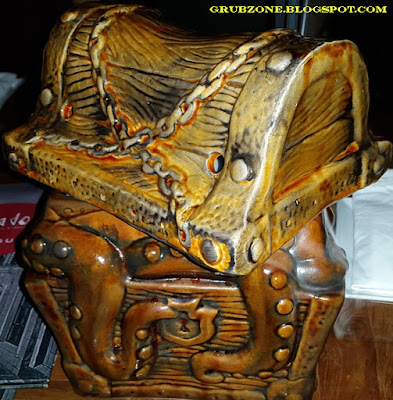 House of Eden was quite the tease for a pirate fanatic like myself. Fashioned as a seventeenth century Spanish treasure chest with the Kraken's tentacles on it, this one was definitely a chest of surprises. This cocktail employed the popular mix of Rum, Vodka and perhaps a hint of Tequila in it along with some coconut. The flavor mimicked the sweet bounty chocolates.

Captain : That be one of the best treasures on the high sea. :D 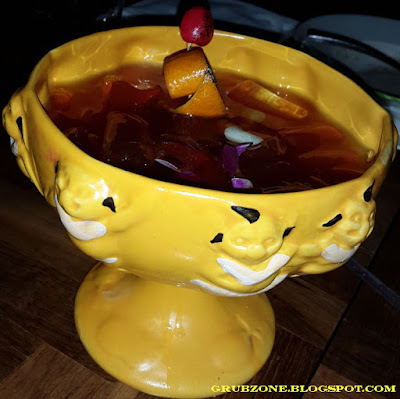 Barren Island was served in a cup reminiscent of the fabled holy grail. Alas, this mix gave me no superpowers, immortality or insight into God. The flavor was nice but seemed to mimic Tiki Mexicana a bit too much. This wasn't a bad thing since I loved the Mexicana but I was expecting something else. Pine cup was my favorite among the offerings. Made of Dark and Gold rum along with some pineapple juice, this drink offered a sweet and spunky sour flavor. The potency was mild but the drink made good use of the rums. I felt as if I was sitting in the lower storage deck of an old Spanish caravel rocking in the deep seas. Nothing but candle light to offer me a view and surrounded by oak barrels full of rum. Ah adventure. 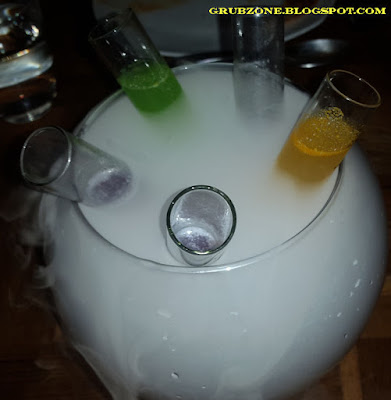 Skittle shots were fruit flavored candied shots in test tubes served in a fish bowl full of dry ice. These were quite the addicting sweet drinks that went by in a quick gulp. Methinks that I would have enjoyed this as a complete drink more than as a short shot. 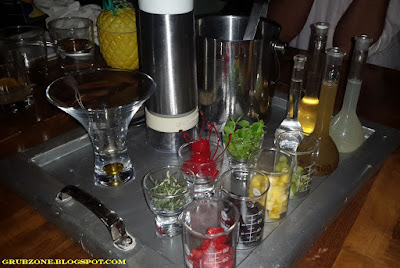 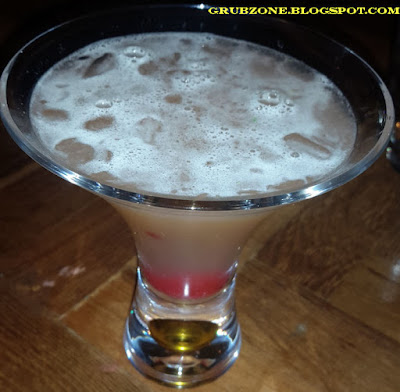 Zinger Cocktails was a live demonstration for the patrons. A flaming concoction is slowly poured into a mixture of liquor and some herbs. Then one must inhale the vapors of the flaming concoction(after the flame is out) before taking a sip of the mixture. It is said that the true flavor of the mixture can only be felt after inhaling a wisp of the alcoholic smoke.  This is true as the flavor does change with the sniff. Despite the theatrics, both the flavors of this drink did not appeal to me. The greens felt out of place in the mixture and it tasted much like some kind of a salad beer.

Captain : The visuals were great but somehow smokin alcohol is not me idea of fun.

Crewmate : It be a, strange sensation.

Captain : The liquor belongs to me belly not lungs.


Drinks done, it was time to move on to the grub. The grub had no fixed course order with dishes from both mains and appetizers being served simultaneously. 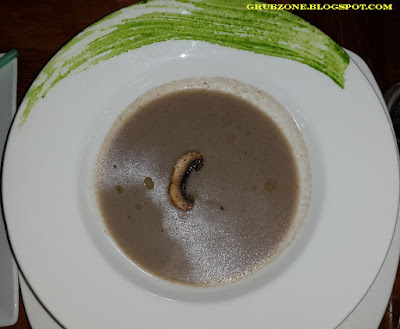 Truffle Soup literally looked like grub initially. Despite having an acceptable truffle flavor with lots of cream, its meager quantity on a flat bowl was a turnoff. This one also needs work on its visuals for obvious reasons. 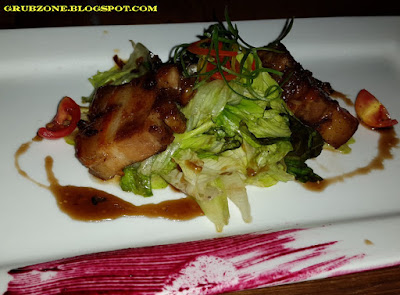 Caramelized pork belly was a dish full of vibrant flavors. The meat was cooked just right with the Belgian pork belly being neither too soft and neither too chewy. The caramel sauce had permeated into the deepest recesses of the meat. Each bite was full of sweet, slightly tangy and a wee bit savory flavor. An addition of charred pineapple added to the sweetness. Its presentation was quite appealing too. Was a much better pork belly when compared to the thing I had at Ellipsis. It felt like a true fine dine preparation.

Captain : This be quite the flavorful one.

Crewmate : *Stares at the Captain*

Crewmate : I ain't getting distracted, you will end up eating the whole pork belly yerself.

Crewmate : *Looks at the plate* Hey where did the pork belly go, I was lookin' at you the entire time. 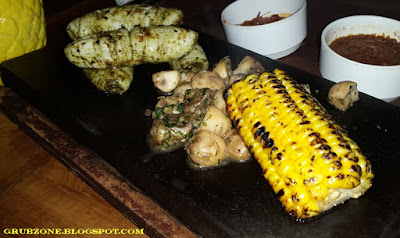 Lavastone Grill - Though I could not taste this one, I liked the concept behind it. Patrons can choose their sides, sauces and their proteins(Squid in this one). Its cooked and served on a black slab which resembles volcanic granite hence the name. 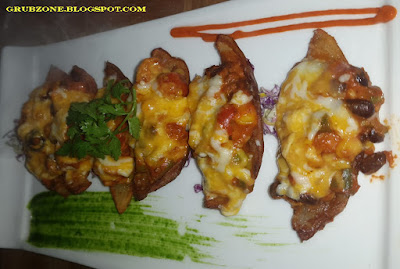 Tex - Mex Loaded Potato skin is a popular vegetarian preparation in the famous red American state. These baked skins were topped with corn, asparagus, olive, tomatoes and cheese. This made a great snack.

Mexican bean and Cheese taco was a passable affair. There were far too many beans within it and the flavor was very one dimensional. The visuals were not entirely pleasing either. 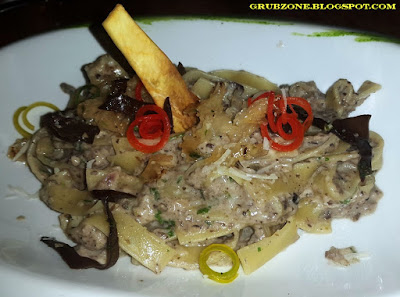 Four Mushroom Truffle Fettuccine was a champion amongst vegetarian dishes. It was made with a mix of Truffle, Shitake, Oyster and button mushrooms wrapped in cream and Parmesan. The dish was visibly enticing (excuse my bad pictures), aromatically pleasing and mesmerizing on the tongue. The taste was salty and each mushroom added its own flavorful depth to the mix. The dish felt like a house specialty and one that must be tried. 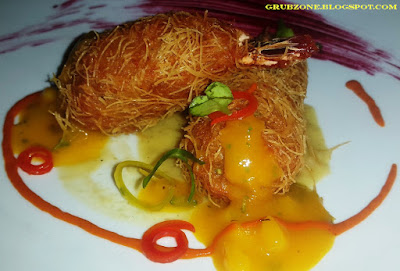 Kataifi Prawns were deep fried prawns covered with Kataifi pastry. It was artistically presented and was perhaps the looker of the night. The prawns were crunchy, full of flavor and well cooked. The pastry however seemed to add no flavor depth being just a visual booster for the dish. 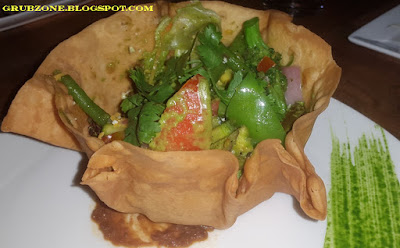 Vegetable Taco Salad was simply a salad served in a cup fashioned out of Tortillas. However, the simple construction worked in its favor. The salad was good and breaking off cup bits seemed to be quite a pleasant dinner activity. Chicken Enchiladas were acceptable. The chicken and the elements worked well except for the fact that there were too many beans in this dish. The beans kind of took over the flavor and overshadowed everything else. I tried my best to reduce the bean content manually but it does get old after some time. 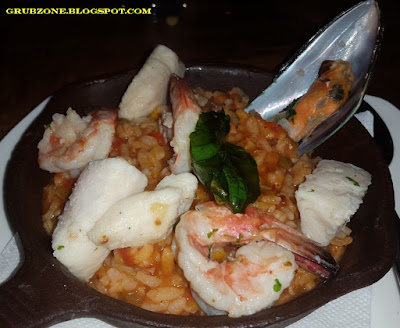 Seafood Paella - This Valencian delicacy with genuine Spanish Bomba rice was cooked in a saffron broth and was full of powerful flavors. The addition of prawns seemed like a post work thing but the dish was still playful and flavorsome. Continental Spanish food can be fun. Its remarkably different from "Mexican" food. 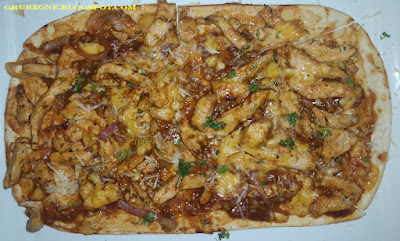 BBQ Chicken Flatbread - This was an interesting flatbread variant of my favorite BBQ Chicken pizza. Flatbreads and square pizzas are fast replacing the pizza craze. It was loaded with Chicken and generously drizzled with BBQ Sauce. The aroma was quite appetizing too and this dish was gone off the plate in seconds. Though this was an odd choice in a Latin themed restaurant, it was one of the best things on offering. 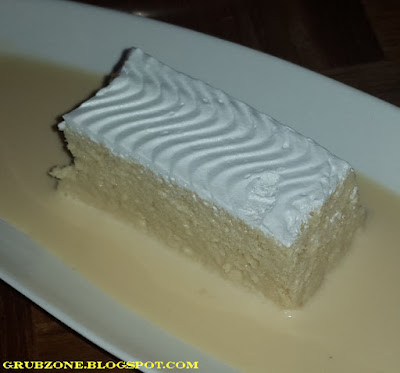 The service was decent since there were fresh plates and loaded dishes on the table at all times. One must also compliment the bar keeping staff for the exotic cocktails they whip up. The theatrics require time, training and patience. And it makes up a good experience for the patron.

The pricing seems to be slightly higher than most pubs in Mumbai. While the pricing feels justified in case of some excellent preparations. It might feel the opposite for a few others. I guess it varies from experience to experience.

Though the food and drinks both were equally great at Asado, I really am going to remember the place for their drinks. One could after all have Tacos, Quesadillas and Enchiladas at other places but some of those cocktails seemed unique and exotic.

"Yer bellies be full of Rum, Absinthe and meat. We shall sleep in the ship by the coast tonight. And tomorrow will be a new day on the sea."


-I was invited to a cocktail preview by Restaurants PR. The review however is neutral and without bias.-

Posted by Rishabh Mittal at 6:18 pm