I was hungry and I decided to conduct a pantry raid...

Oi Lad, you do not interrupt me when I am narrating an anecdote.

Crewmate: But can you even call it a raid? Its your own ship Cappy?

Let me start again,
Ahem, I was hungry and I had just put an errant mate on dish washing duty for a year. I ransacked me ship's pantry and found that there was nothing good in there. I must find out who decided to stock sprouts, pulses and eggplants instead of good ol' chicken and bacon. I heard the lookout's bell from above and I climbed back to the top deck. The lookout declared that he had spotted a cluster of restaurants on the coast. Among them was our next mark. "Desi Deli." Local legends suggested that this place serves amazing Hot dogs. Well time to find that out.

Desi Deli is a small and I mean really really small microcafe stuffed in the lanes of Bandra. Guess you get the idea about how small it is by now. It faces the majestic Salt Water Cafe and one has to wonder whether the little one has any chance against the old big one. Well small it may be but Desi Deli has a big heart and even bigger burgers and hot dogs. And you may just end up falling in love with your fingers.

There is not much to write about the ambiance. Its a comfortable place with three indoor tables and a few more outside. However, it could get cramped at peak hours. But this place offers something that is completely unheard of so far - Gourmet Hot dogs. Yes you read that right, the hot dogs here are much more than dumping a sausage in a pair of buns and topping it with sauces. 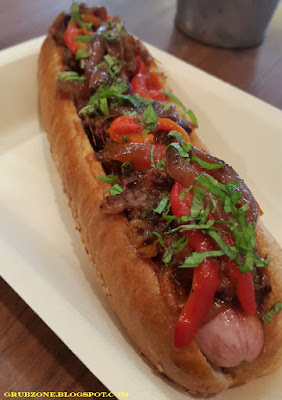 Goan Desi - This whopper looked like Hot Dog royalty. It was made of a large sized sausage topped with caramelized onions, peppers, chorizo sauce, spices, sauces and scallions. The flavor was a mix of savory with a moderately spicy undertone. This hotdog combines the classical New Yorker and Goan beach shack grub into one delectable and aromatic hotdog.

Captain : Now this lad, is how a real hot dog should be.

Captain : Don't want any? All right. More fer me then.

Lush Lamb Burg was recommended by the smiling and affable owner of the cafe, Lolita Sarkar. This huge burger that somehow resembled a stack of Picard's Enterprises was a mix of Scottish, Indian and American elements. The lamb patty was monstrously large and well done. The Burger was salty, savory and juicy. The burger was a messy mammoth full of jus, cheddar, grilled apples and red mayo. There was even an addition of Bengali Birista which is mostly made of fried crispy onions.

All the elements produced a phenomenal burger. The birista added crunch too. This was served with ultra thin salty fries which I felt clashed with the flavor. So I set aside the fries and finished the burger. Fair warning, this burger will make you lick your fingers...a lot. Has to be among the top five burgers that I have had in Mumbai. The other four were in fine dines.

Captain : This be so messy, all this jus on my hands.

Crewmate : (Heavy breathing) Oh that be terrible cappy, let me help ya finish that.

Captain : Oh, you untied yourself.

Crewmate : That was mean cappy, why did ya tie and gag me?

Captain : To see how good you were at untying yourself? You succeeded. Heh. 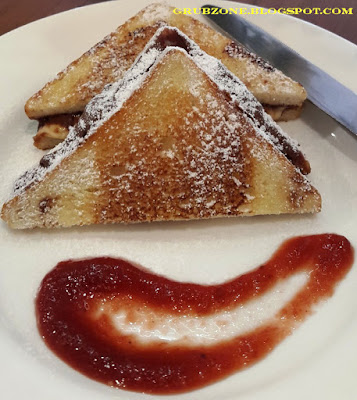 Trucker Tycoon was made of toasted bread similar to that found in state highway dhabas, hence the Trucker part. This looked like a simple dessert at the start. But just like Desi Deli, this small toast is filled with near infinite quantities of goodness. And by goodness, I mean Mascarpone cheese and liquid Chocolate of course. I was ambushed as I took a bite into this and out came a never ending amount of the above mentioned liquids. Its like having Chocolate and Cheese fondue at the same time. Hence the Tycoon part.

The cafe is well staffed for its size and hence one always gets their grub on the dot.

Desi Deli's pricing could feel a little expensive. At INR 325, the Lush Lamb burg feels pricey as compared to its inferior siblings at places like McDonalds or Burger King. But then its cheaper than pub like places and fine dines. I suppose its acceptable if its quality were to remain unchanged.

Desi Deli was a tasty experience. The food alone counts for my high scoring towards this place. Its definitely a place that one should visit for a good Burger and Hot Dog. And from 14 December 2015 to 10 Jan 2015, Desi Deli is running a special Christmas menu with unique burgers and hotdogs. These will no longer be sold post event. Tis' Captain may go to this place again in the near future. I miss that Goan Desi Hotdog.

"Mark this place on me map lads, I think its going to be one of me favorites."


-I was invited to sample the grub by the cafe's PR. But my post is unbiased and neutral.-

Posted by Rishabh Mittal at 7:22 pm