The night was cold as I rubbed me hands. This be my last documented voyage for the year. I could see my breath being turned into mists as the temperatures fell. The sight of the lights in the distance brought much needed warmth. The final port for this year lied ahead. A small tavern with warm light, was me mark for the night. After all, a sailor does need some grog to warm his timbers. The old port was almost empty as me crew docked the ship. The last destination for this year was aptly named "The Bar Terminal". 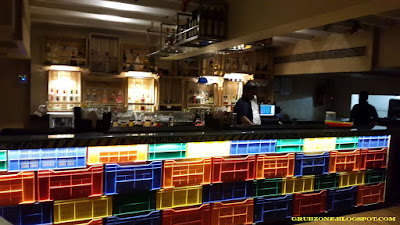 The Bar Terminal is brought to you by the team behind Spices n Flavors and Sky view Cafe. Following their usual theme, this food traveler's terminal is a vegetarian bar. The Grog's the real deal but the grub is purely green. The grub however comes from the kitchens of Spices n Flavors and is thus some of the best vegetarian food in the city. It seems to blend well with the drinks. I had been invited here for a blogger's preview meal along with my good friend Christina Peter and we were always up for some drinks. 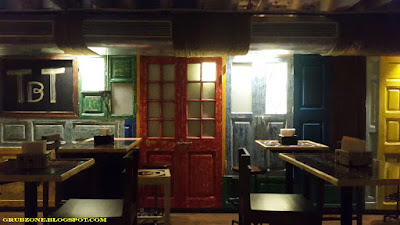 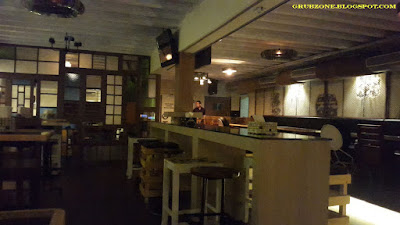 The first thing that gets to you is the idiosyncratic ambiance. One of the walls has a fence similar to that in Pont des Arts. Put a lock for memory sake.  Then its the decor, most of it is made with recycled products. Old baskets, Vinyl records, motherboards, keyboard keys, gears have all been embedded into the ambiance. The job seems quite well done as each of these things seem to be lending a 90's feel to this place. Colorful yet rustic in some ways. 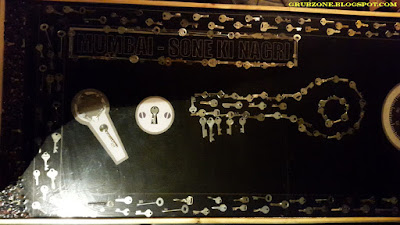 It may feel quirky initially but it adds to the uniqueness of the place. Here is a picture of one of the tables. Each table had a different theme to it. The designing must've been hard work. 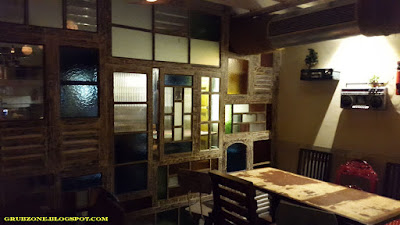 There is also a segregated inner area that is reserved for the family types or private parties. This area continues using the blast from the past theme but it somehow feels different, probably due to the usage of different lighting. 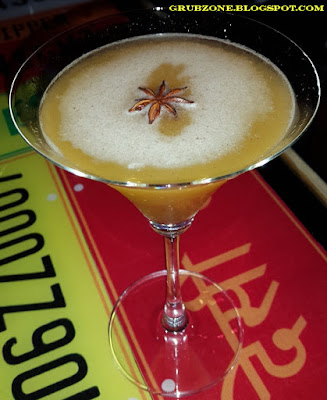 Summer Dream was a blissful alchemy of Star Anise, Basil, Passion fruit and Vodka. The drink had a mild kick but the Anise, Basil and passion fruit provided both a fragrant and a flavorful punch to the palate. This felt much like a dessert cocktail due to it sweetness. The Star Anise was the strongest element while the passion fruit subtly provided a natural saccharine flavor.

Captain : It be odd if I have Summer's dream in Winter. Ain't it?

Crewmate : That means you are missing Summer right?

Captain : No, I love the winter. But a touch of summer ain't be such a bad thing. 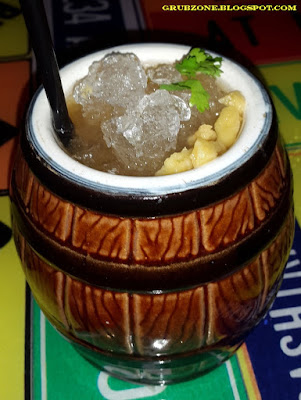 Jack Sparrow was served in a replica of an oak barrel. It had a very Caribbeanesque appearance to it. This cocktail was made of dark Rum, Jaggery(unrefined cane sugar), lime juice and sugar syrup. While this one had a stronger potency than the Summer dream, it felt undesirably sweet. There were too many sweet elements thrown into the barrel. I think it would have done well without the Jaggery and better with some coconut milk instead. 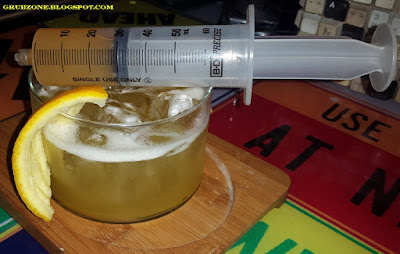 Caribbean ride was hands down a better drink than the "so sweet" Jack Sparrow. While I am not usually fond of syringe drinks, the flavor of the final product was actually great. This was a sweet tangy mix of Peach schnapps, gin, coconut rum, pineapple and orange juice. I could feel myself on a beach of the Bahamas during the sunset with this one. The Coconut rum added the Caribbean flavor while the fruit juices gave it a tropical feel. The potency was right and the drink was the best thing of the night.

Captain : This feel like a relief after meeting sweet ol' Jack Sparrow.

Crewmate : He won't be very happy with that title, Cappy.

Captain : Whats he gonna do? Chase me with a bottle sized ship ha? 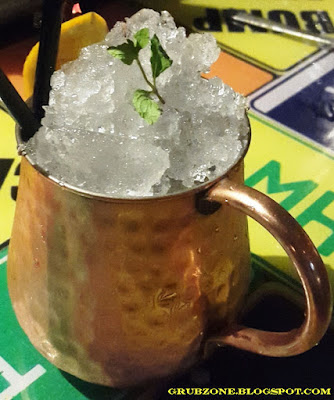 The Mint affair is something I'd love to have in the morning, spoilt as that may sound. It would also work well in a high octane dance party. Made of Whiskey, Apple Juice, clove and mint - This was mildly potent and the refreshing kind of cold. The drink had a strong aroma and a hybrid kick. More than the whiskey, the kick actually came from the clove and the mint. This cocktail feels very much like the big daddy of stuff like Red Bull.

Smoked Berry was made of fresh strawberries, tequila sour and was infused with dry ice smoke. The flavor of the vapors thus took on a strawberry flavor. It was quite an experience inhaling strawberry flavored smoke while having a sip of this sweet and tangy cocktail. I have actually put up a video of this on my Instagram. Please have a look. 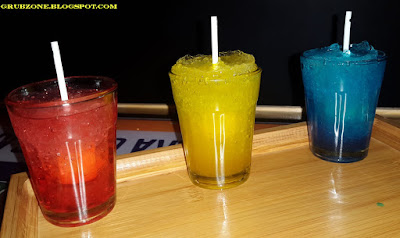 Popsicles were three "Golas" dunked into fruit flavored alcoholic concoctions. The mixes were really light and I think it would be apt to call it an Alcopop on a stick. Fun to try but I don't think it would really make a appropriate drink on a Friday night.

The bar nibbles were quite fun. Though these did not seem to naturally pair with the cocktails, the whole experience of drinking and eating was still a satisfying one. 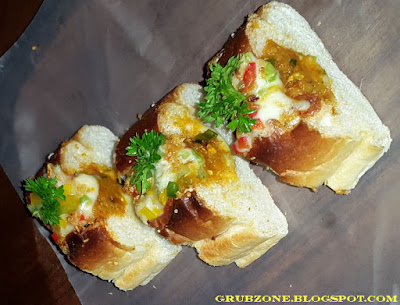 Mumbai Masala Garlic Bread was the traditional garlic bread king-ed up. Stuffed with mashed potatoes, herbs, veggies and crowned with a cheesy coronet. This was a fun take on the old snack. 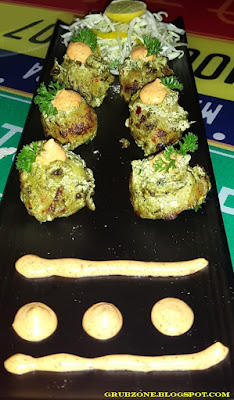 Chatpate Aloo was presented really well. But the flavor was another story. The flavor felt insipid and could have used more of the Hariyali Masala. It felt too much like plain Jane potato mashing. 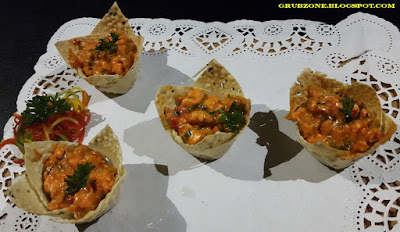 Crispy Pappadum Bowls was perhaps the most fun item among the nibbles. It left us wanting for more. Cups made out of poppadom were filled with garden veggies, cheese and sauces. The flavor resembled McDonald's Pizza McPuffs. However, the salty pappads added an Indian saltiness and crunchiness. These were some fun crunchy savory cupcakes.

It has to be mentioned that both Christina and me spotted an obvious flaw with these. The poppadoms were uncooked around the folds. Though, this felt like a teething issue.

Captain : These cupcakes be De-lee-cious.

Crewmate : Why would you call them cupcakes Cappy?

Captain : Because they are inside cups. 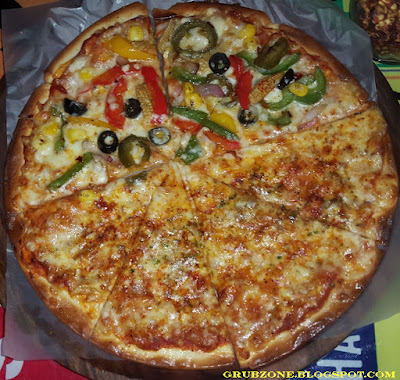 Verdure (Top) and Taste of India (Bottom) was a specially made split pizza since we wanted to try two but had the hunger of one. The verdure was a decent pizza especially if you are a vegetarian. I however, found the flavor of the TOI pizza resembling that of homemade cauliflower dishes. This isn't a bad thing but my palate was very used to this "Ghar ki Gobi" flavor so I cannot actually bring myself to find any praise for it. TOI was made of cheese and spices. It was a variation of the classical margherita. 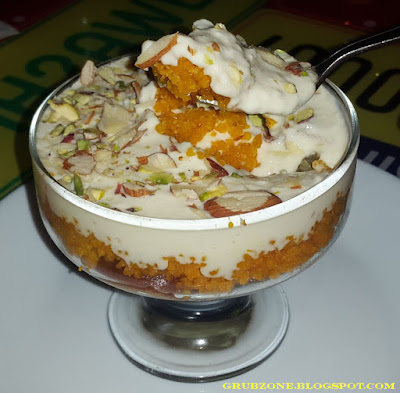 Gulab Jamun Lasagna was a good looking dessert but probably could have used another name. It had three rough layers of Gulab Jamun, Motichoor and Rabdi on top of each other. I get that the lasagna part probably came from the layering involved though the same can also be said for a sandwich.

The dessert tasted great with none of the three individual sweets overriding each other. The unison of flavors was indeed a sweet delight. The taste was chiefly dominated by creamy Rabdi. Motichoor added extra sweetness and chewiness. The Gulab Jamun added sweet juiciness. I think more than Gulab Jamun Lasagna, the name Rabdi Sandwich would fare better.

I cannot comment on the service since the staff was still under training. Most of our dishes were served by a server and the manager himself. This was Day Zero, the place opened shop the next day.

The pricing was variable. The drinks felt fair, the lighter ones being easy while the more potent ones being higher. Though I found my favorite Caribbean ride to be well priced. The food pricing seems to be on par with most pub establishments. It would be difficult to go any lower in this part of the town anyway.

I think the place makes a nice stop for week enders. The only problem would be the lack of non vegetarian food but if its drink and nibbles that you seek then this place works well.  I'd say, another great addition to the Kala Ghoda food scene.

"The new year beckons us lads. New adventures and oceans await us. Enjoy the grog tonight for tomorrow begins a brand new saga."


-I was invited to sample the grub by the pub's PR. But my post is unbiased and neutral.-