A Voyage to Pa Pa Ya - Lower Parel, Mumbai

Before going on longer voyages this year, I had me ship in a dock for repair and upgrades. The first entry for this year be a place called Pa Pa ya. Eh, is it the fruit or does it mean something more? Intrigued, I decided to raid the place and grab the grub. The boys were busy with their deeds on the land and I went alone for a change. More grub for good ol' me. Or so I thought.

This was my first foray into any establishment owned by Massive Restaurants, the group behind fine dines like Masala Library and Farzi Cafe. Its helmed by Zorawar Kalra and his father - The legendary Jiggs Kalra - an icon amongst Indian food journalists and writers.

Papaya is located in the prime area of the top floor in the Palladium mall. Over here, it faces many other giants like Mainland China and Social. Despite being located in a mall, it would be unfair to dismiss it as another "Mall restaurant". It comes with its exclusive own gold class and excels on the one aspect that matters the most, the food. 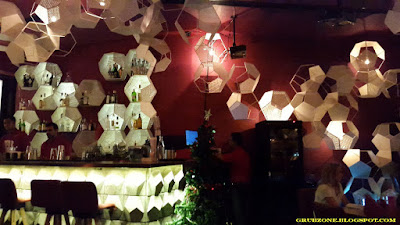 Pa-pa-ya is a dim lit restaurant with Dodecahedron like structures (representing molecular gastronomy) hanging all over the place. The lights are often hidden inside one of these structures providing an interesting visual. Though the place is small, the decor does make effective use of the space. Despite the limitations, Pa-pa-ya still manages to put in a popular bar and a sushi counter inside.

Since this was a blogger's invite, I was served almost all of the house specialties. My host and server Manish was both professional and well informed. He knew the dishes and their ingredients well and he guided me through a journey involving a fusion of Asian and western delicacies. Yep, this guy was a walking foodipedia. The Service was amazing as far as I can judge. 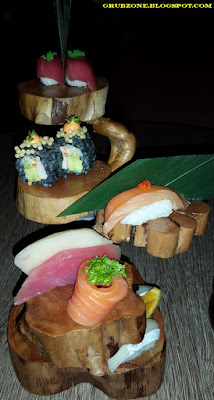 Nigiri Sushi tree was a masterpiece created by Chef Sahil Singh. There is a lot of visual science applied in the art of Sushi. Serving it up on a cold plate kind of kills the dish. Serving it on a multilayered tree is both visually enticing and works up an appetite. Tuna, Salmon, Hamachi and Sashimi in the branches from top to bottom. This was all high quality Sushi and it rivaled the sushi that I had in Singapore and the Philippines. Even surpassed those in some aspects.

Captain : This looks like a lovely mix of sushi and it is all mine. Ha...ha...

Captain : Hey, who are you? Why are you looking at my Sushi like that?

Captain : Stop making those eyes. Noooo...all right ya little pest. You can have some. 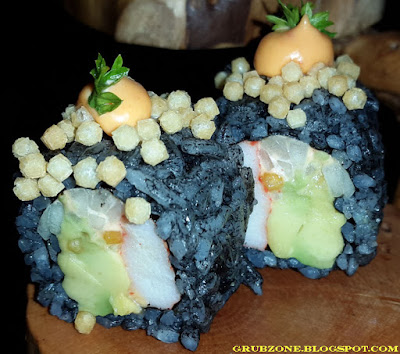 Carbon Sushi. I particularly loved this piece from the tree set. This was a salmon maki sushi with wasabi. It was coated with squid ink dyed rice and topped with bubu arare. It was crunchy (Thanks to the yellow arare), very umame and had a little bit of savory as well. A light dip in the soya worked well with it. I advise the reader to eat this as soon as its served. It starts to lose its delicate flavor perfection over time. This was by far, one of the best things that I have ever had anywhere in the world. I officially adore Japanese food now. 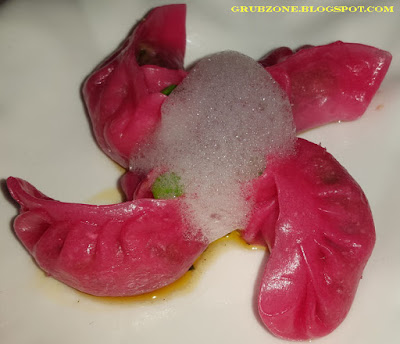 Sauteed Leek and water chestnut dimsums. For anyone who argues that the restaurant does not have quality vegetarian grub, I would simply claim that this person has an unrefined palate. This was a dimsum with beetroot infused wrappers and filled with leeks, celery, water chestnuts and other greens. It had a bit of soy with it and was covered with flavored foam made using techniques of molecular gastronomy. It perfectly replicated the umame flavor and was mildly addicting. The wind vane display and the red color definitely attributed to top notch plating.

Its amazing what molecular gastronomy can do. Just like Industrial light and Magic revolutionized movie making in the 70s, these techniques are the next step of cooking. We will probably tell our kids tales about the romance and the mystery associated with the origins of Molecular gastronomy. 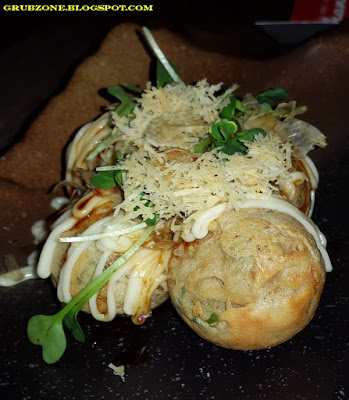 Chorizo Takoyaki was an emperor among kings for me. This was the dish of the night even though everything else was good. These minced Octopus balls wrapped in flour batters are a common snack in Japan but in India these are largely unknown. Blame Anime and popular media for spoiling me. I have been wanting to try these for ages.

And what better place than at Pa-pa-ya. The minced octopus laced with chorizo sauce provided a mix of umame, savory and sweet flavors. The Negi tare or the scallion sauce commonly used in my favorite Yakitori skewers was drizzled generously on this. It was topped with Parmesan and Katsuobushi. Katsuobushi is dried Tuna flakes which tend to dance in the slightest of wind. Applying these added a delicate visual treat to the balls.

Captain : These be amazing. The sea has some wonderful treasures.

Captain : Whats with those Nyas? Shouldn't it be Meows?

Captain : Oh I get it, you are a Japanese Cat.

Tuna Tataki Pizza was a visual novelty that tantalized the taste buds too. This was made of a thin crispy corn tortilla layered with thin slices of seared tuna and Jalapeno. It was given a finishing touch with the sweet caramel like unagi tare sauce and yuzu wasabi. This dish artfully combined Mexican and Japanese cuisines and produced something capable of sending people to a celestial reverie. 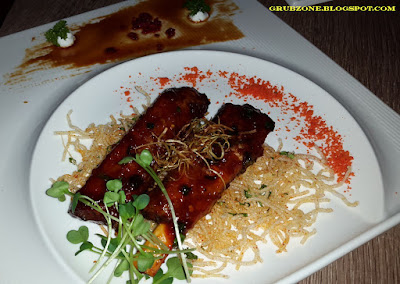 Kurobuta Spare Ribs is apparently made from one of the best pork brands in the world - The legend of Kagoshima, the Kurobuta or a Japanese strain of the famed Black Berkshire pig. This is regarded as the best pork meat in the world. The meat tasted sweet as it was smoked, barbecued and drizzled with BBQ sauce. These were positively the best pork ribs that I have ever had. The meat easily came off the bone. Each bite was full of juicy flavor and the meat was well cooked to perfection.

Captain : Come on mate, this ain't even fish.

Captain : Ok ok I get it, you are a little lass. 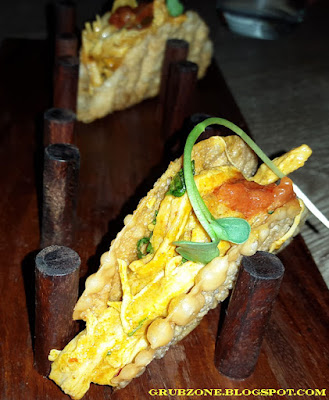 Grilled Chicken and Avocado Tacos was another fusion of the Mexican and Oriental kind. Though this was a great item in comparison with tacos elsewhere, it did however feel a bit flat in comparison with the rest of the PPY lineup. This taco uses Gyoza sheets instead of Tortillas for the shell. 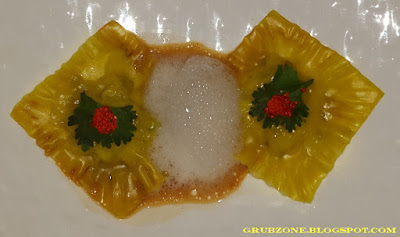 Crab and Scallop Ravioli was made of minced crab and saltwater mollusk meat. It was dipped in a bit of Tobanjan sauce and was topped with flavored foam which had tones of soya, wasabi and ginger in it. This dish looked amazing though it could have done without the foam which felt as a mismatch in both visuals and flavor. It was topped with some caviar. The dish surprisingly felt a tad bit unsatisfying. It was an interesting fusion of east and west but each parcel somehow felt inadequate. 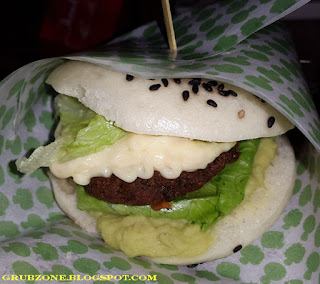 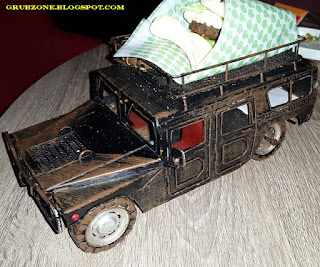 Edamame and chick pea sliders with homemade chips. These were delectable little burgers with soft chick pea patties. Completely green and devoid of meat, these things were quite good. The burger buns were made of fermented lotus root flour. There were white and amazingly soft.

These are served on a toy hummer, probably to point a connection to the jungles of Indochina. (So I felt anyway) 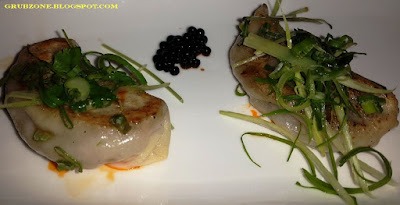 Roasted Aubergine were pan seared aubergine parcels with Chili, sauces and some green stuffing. These were good for a vegetable that I am not particularly fond of. I found myself finishing both of these instead of my usual regulation small bite in case of aubergines. For me to finish an aubergine, it has to be really really good. A treat for the vegetarian. 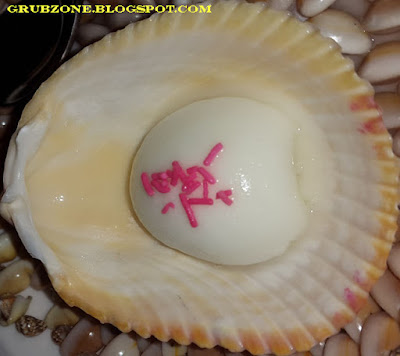 This palate cleanser probably deserves a mention. It was almost a yuzu and wasabi infused ice cream. Ahh, the wonders of Molecular gastronomy. 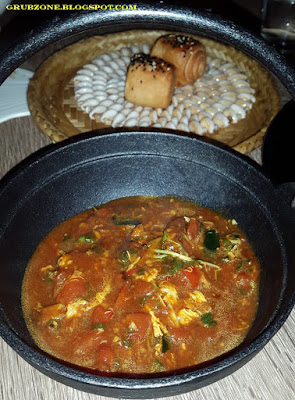 Singapore Chili crab and mantou buns - The dish on its own felt like an ordinary curry.  It was made of Sambal and crab with lots of greens. The buns however added a delightful twist to it. The Mantou buns are supposedly a staple in Northern China. Google suggests that these are usually white in color and very light but Pa-Pa-Ya's sweet buns worked well too. These went well with the curry and added the missing flavor depth to it. 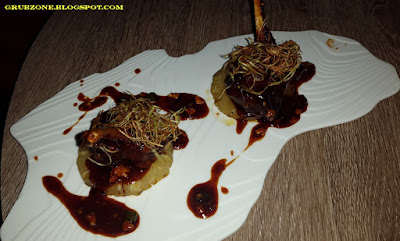 Braised Lamb Chops - These Lamb Chops from Kiwiland are apparently braised for eight hours. Though the meat did not come off easily from the bone (and there was a lot of bone) - it still was full of flavor. The sweet and sour vinegar provided saccharine sweetness. These were placed on top of Caramelized pineapples which supposedly were there to add a flavor depth to it. I however felt that these were unnecessary, at best the pineapple felt like an edible plate. 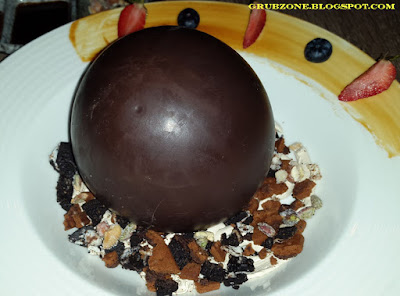 The Flaming Chocolate Ball is becoming increasingly popular at fine dines. The version here looked like a grand dome of chocolate. Manish then poured some burning sambuca over it and the dome melted away to reveal a delectable concoction of desserts inside. The animation can be found on my instagram. There was a mixture of brownie, fudge, ice cream, cake, nuts, cheesecake and chocolate sauce inside it. Unlike most places which mess up desserts involving mixtures, Pa-pa-ya got it bang on target. The dessert felt fit for Royalty.

Captain : This dome contains a spell of ecstasy, a strong dose of fulfilled fantasy ... Hey Cat stop gnawing at me dessert.

Captain : Ah right, chocolate...milk. And I was gonna have me solo night tonight. Where did ya come from, ya cute little landlubber?

Pa-pa-ya surprisingly is cheap for the fine dine that it is. The rates are likely to go up in the future given the location and the quality of the meals served but for now these prices are pleasant. Note that Pa-pa-ya is by no means easy on the pocket but on comparison with almost all other fine dines, the food is both superior and affordable.

Papaya may not be the best place for an ambiance - The atmosphere is loud, clustered and there is no partition between the mall and the restaurant. The food here however is some of the finest that I have had in India or the world. Best ingredients, a well experienced chef and using all the science behind Japanese cooking results in a genuine Far East experience. As I mentioned earlier, Pa-pa-ya delivers on food. Its easily going into my Top five list for Mumbai.

Captain : I am back lads, had good grub and its time to chart our course for the year.

First mate : Why is that fur ball loitering around yer leg mate?

Captain : This is Nina. She will be joining the crew.

First Mate : Ha, so you found yerself a stray and gave it a name too.

Captain : We needed a ship cat anyway and this little thing nominated itself for the job.

-I was invited by the Restaurant's PR. However, my review is neutral and free of any biases.-

Posted by Rishabh Mittal at 4:21 pm